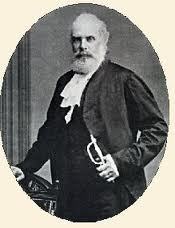 The BC Court of Appeal has no need to get into the complicated trust law in order to decide that four congregations who have left the Anglican Church of Canada cannot take their church buildings with them, a lawyer for the Diocese of New Westminster argued Tuesday.
George Macintosh, Q.C., cited cases that went back as far as a ruling in 1874 when pioneer B.C. Judge Matthew Baillie Begbie (image on right) in Victoria told a dissenting Anglican clergyman that while he could leave the then Church of England in Canada, but he could not occupy its churches and defy its rules.
Macintosh has been defending the Diocese of New Westminster against a suit brought in 2008 by the four congregations that left the Diocese that year and joined the Anglican Network in Canada (ANiC): St. John’s Shaughnessy, Good Shepherd, and St. Matthias & St. Luke, all of Vancouver, and St. Matthews, Abbotsford.
Last year the ANiC-affiliated group failed during a trial to convince lower court Judge Stephen Kelleher that the church properties were held in trust for the people in their congregations, and they get to keep them. The appeal now is being heard by Judges Mary Newbury, P.D. Lowry, and Nicole Garson.
The key argument of the congregations’ case made on Monday by Geoffrey Cowper, Q.C., is that religious properties in Canada are held in a religious trust for the people in the parishes. The purpose of the trust is Anglican ministry under doctrines and practices declared when the Anglican Church of Canada was founded in 1893, he argued.
Same sex blessings are incompatible with those orthodox doctrines, said Cowper. The four congregations should be allowed to continue their brand of Anglicanism and continue to use their church buildings, even if they have left the Diocese.
But the Diocese’s lawyer, given his turn to reply Tuesday, said the trial judge’s opinion that deciding the issues on the basis of  trust law was unnecessary. He agreed with the lower court that the right course was to take a “church governance approach,” because the Anglican Church of Canada has a highly structured and sophisticated way of governing itself.
Arguing that the Anglican Church of Canada, including the Diocese, had therefore handled the same sex blessings properly, Macintosh went through a history of how it had dealt with it.
The Diocesan Synod voted to ask Bishop Michael Ingham three times for a same sex blessing before it was granted – and the leaders of the four congregations participated in the debates.
Several diocesan commissions were set up to study the issue.
The bishop agreed to a blessing only if there were guarantees that priests opposed to them were granted a “conscience clause” guaranteeing they would not be penalized for their belief.
Bishop Ingham allowed the blessing to be conducted in only eight of the Diocese’s 78 parishes, and only if both the priests and the congregations involved wanted them.
An Episcopal visitor – a conservative bishop – was offered to provide pastoral care to dissenting congregations.
A panel of visiting Anglican leaders chosen by the Archbishop of Canterbury urged the congregations now involved in the lawsuit to take up the offer (they refused).
The lawyer for the Diocese told the Court that authorization of the blessing breached no religious trust. Many in the Diocese who opposed the blessing, unlike the ANiC group, continued as members of the Diocese.
“The reality is that many devoted Anglicans choose to stay with the Diocese although they disagreed with the same sex blessing,” he said. “When the tide turned against the Appellants, they chose to leave.”
Macintosh suggested that the trust argument advanced by the opposing lawyer was “formulated for the purpose of obtaining these properties.” There were no trust documents; the trusts were all “implied”; the first mention of religious trusts appeared in the lawsuit, nowhere else.
And, Macintosh went on, if there is an implied religious trust, the purpose of it was not as the four congregations stated, to continue all doctrine unchanged. The General Synod of the Anglican Church of Canada oversees doctrine, and can develop it.
“The Church does not intend to be frozen in any particular theological position, but to be able to evolve,” he told the court.
Macintosh concluded the day’s arguments by rejecting the dissidents’ argument that Judge Kelleher had relied too much on American precedents, and not on Canadian law.
Beginning in the 1800s, he said, Canadian and American courts had tended to solve disputes over religious properties not by invoking trust law, but by examining whether dissenting groups had been dealt with fairly under their own internal rules, he said. This led to citing the Begbie case and  an 1886 case involving Quakers, plus several modern judgments from the United States.

Earlier Tuesday the morning, Cowper finished putting the initial argument for the four congregations. He maintained that an important cause of the split amongst Anglicans was due to the denomination’s inability to resolve differences.
“Ultimately the reason we are here is because the mechanisms of the Church were inadequate,” he said. “This [dispute] couldn’t happen in the Roman Catholic Church,” he suggested.
The Court has a choice, Cowper argued: either it could reorder the implied religious and charitable trust he maintained existed in order to aid of both parties. Or the Court could allow Bishop Ingham to turn the people in the four congregations out of their churches.
The lawyer said that Bishop Ingham is understandably upset that there are Anglicans in his area who do not accept his authority. But, asked Cowper, should the Court be concerned with the Bishop’s “political jurisdiction,” or whether there can be ongoing worship in all the churches, in the four congregations as well as in parishes that do accept the Bishop’s theological innovations.
“Which approach is more true to the values of charity?” the lawyer asked. “Charity is about the voluntary dedication of property for a charitable purpose. The politics of an institution are secondary.” Both sides, said Cowper, need the court to “exercise its proper office as the guardian of charity.”
The Appeal is scheduled to continue through Thursday. On Wednesday, the lawyers for the Diocese should finish their initial presentations.