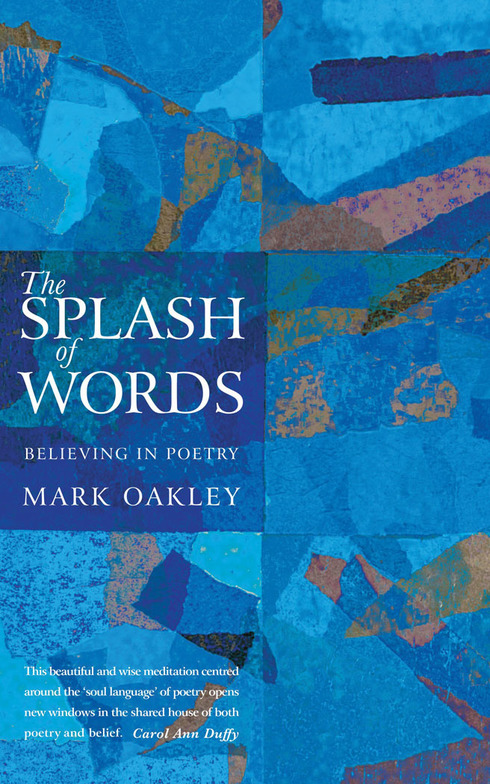 While we remain in the midst of the ongoing COVID-19 pandemic, the Rector of St. Stephen’s, West Vancouver, Canon Jonathan LLoyd, organized a study group for the parish about poetry and faith held on Monday’s under the blanket title of “Creative Hour”.  The book being studied is “The Splash of Words - believing in poetry" by Canon Mark Oakley, and on Monday, August 24, nine participants gathered via Zoom for a special hour with the author himself via internet from his home in Cambridge, Great Britain. Mark and Jonathan have been friends for a long time (both are former archdeacons of Germany and Northern Europe), and Mark generously gave of his time to discuss his book.

Mark Oakley is Dean of St John's College Cambridge, a visiting lecturer in the Department of Theology and Religious Studies at King’s College, London, and the author of several books, among them “The Collage of God”.  He commented to the West Vancouver audience, “I don’t discover what I believe until I start to write.  Writing for me is a spiritual exercise”. He shared with the group the usual writer’s concern, “When you finish, you don’t want anyone to read it...you think it is rubbish...” so he was overwhelmed by the positive response to his first book which he wrote while on sabbatical from St. Paul’s Cathedral, London where he was Canon Chancellor. He was thrilled by to win the 2019 Michael Ramsay prize of 10,000  pounds for theological writing presented by the Archbishop of Canterbury. The St. Stephen’s Zoom discussion of “The Splash of Words - believing in poetry“ was started off by Anne Morley who asked Mark if he was aware of a difference in tone from women poets. He replied, “I am attracted to a certain type of poem written by women, but really we should “blind read” poets and see whether gender comes out. A distilling essence to a good poem is clarification...washing out your eyes a little best works through surprise.”

I asked Mark to expand on his breaking down of the roles of today’s “gods” (pp.77 and 78) as influences on today’s Christians, today’s churches, and “how this might begin to shape our language and thinking in a God-search.” Mark Oakley’s take on this involved several gods. In order, they are:

Rouve Ritson asked Mark how he selected the poems. He replied that he chose works that made a “splash” that “winded him." He wanted poems people knew and ones they didn’t know. He found them on-line, in reviews and in collections. He explained that at a recent retreat for U.S. clergy he was given a book of poems by the Persian poet, Hafiz, who lived at the time of Chaucer. His poems suggest that “God...is found right at the centre of every form love takes...”

Mark was once asked why do we need a minister to lead worship and he replied, “We need someone to take care of the words. Language is sacramental.” Jonathan wondered then, how may we become more poetic in church?  Mark described a survey that asked what were the best three things in the church service, and also what were the worst three things in the service. The answer to both questions was the sermon!  He recommended that we spend a little time reading the wording of the hymns as poems before we sing them, and 'to experience walking into church as walking into a poem'.

Mark had several comments on Christianity and today’s COVID-19 crisis:

Mark summed up the morning by commenting that “we are all compromised by the way the church is about me and my fulfillment...we are a spiritually hungry people many of whom are finding the church too secular.”

Canon Oakley is planning a speaking tour in Canada in 2022.

As of this writing in late August the study of the book by the Monday group was at the halfway point and will continue. According to Canon Lloyd:

“When we finish it, we will connect with Mark Oakley again.  He has invited us to give him feedback, and to suggest Canadian poets for his next book (that he is currently writing). (I have suggested poet Leonard Cohen)”