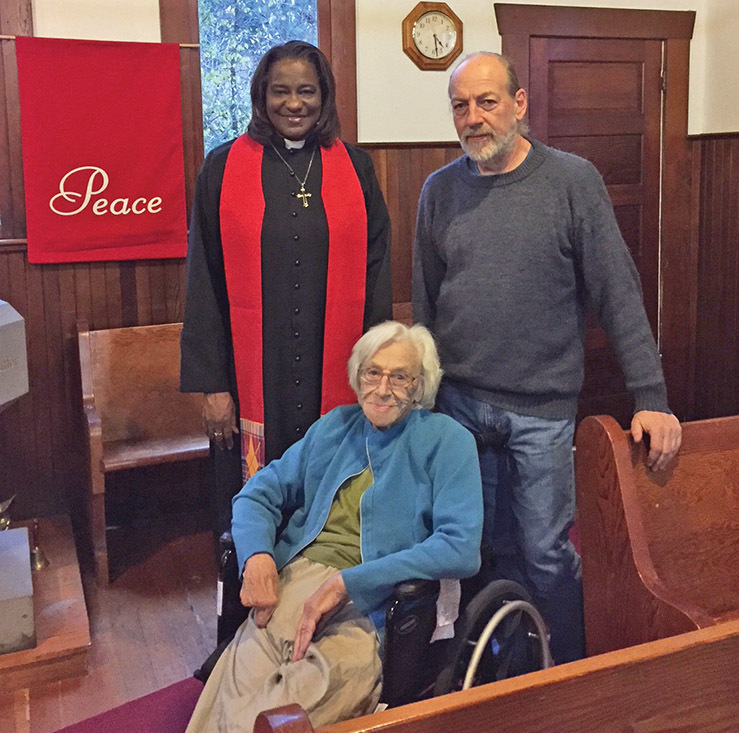 Inspired by the response to the November 2018 bellringing event, Holy Spirit in Whonnock again invited our neighbours to help ring the steeple bell on Remembrance Day.  Last year, we rang it 100 times to mark the centenary of the end of the First World War.  This year, 57 people rang it 101 times as a plea for peace.

Everyone took a turn ringing the bell after various folks representing different aspects of military service had been introduced and had their opportunity to ring the bell.

Those currently serving were represented by two men, ages 20 and 23, the ages of so many who left Whonnock to enlist in World War I.

We were privileged to have the participation of a 92 year-old World War II veteran representing those who served during wartime. She was a member of the Canadian Women’s Army Corps and part of her duties included driving wounded soldiers between docked troop ships and hospitals in Halifax.

People who participated in resistance movements were represented by a member of Holy Spirit parish whose mother and grandmother had been couriers in the Polish Resistance in Warsaw and were imprisoned.

Representing both innocent children caught in war and also the hope that reconciliation can happen even in very difficult circumstances was a man whose childhood memories included planes in the air and tanks on the streets in Germany. Part of his story was the journey he made from east to west just before the Berlin Wall was erected, little imagining it would come down in any of our lifetimes.

We were honoured to have the imam and the president of the mosque next door come and ring with us as a gesture of peace.

The newly appointed vicar at Holy Spirit, Rev. Miranda Sutherland, lead a plea for peace saying "Let there be peace on earth" and the people replied, "And let it begin with me".

A talented young musician from Holy Spirit played reflective violin music during the silence which followed the 101 bell-ringings. After this time of quiet reflection, those gathered left silently in peace,