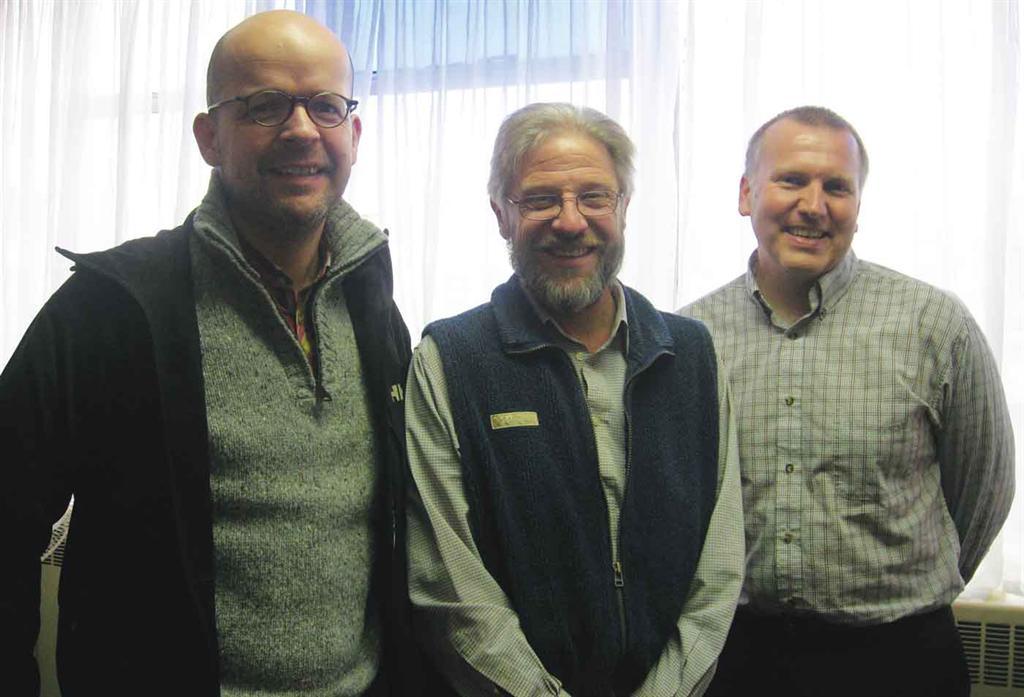 On April 27 just a few days after we celebrated Easter, Father Mark Greenaway-Robbins and Archdeacon John Stephens met up with Bishop Paul Verryn of Central Methodist Church, Johannesburg, South Africa. Paul was visiting First United Church as the guest of Ric Matthews.
Central Methodist Church (CMC) is a place of refuge for literally thousands of people (at times as many as 2500) from all over Africa as they have found shelter and a home there welcomed by this church community which lives out a ministry of compassion and welcoming the stranger in very real and practical ways. The church has been described as an ambulance as it offers care and first aid but has also raised the alarm of the plight of refugees (particularly Zimbabweans) in South Africa. Doctors without Borders (MSF) works closely with CMC in trying to offer health care to a huge number of people overcrowding this place of worship. Paul Verryn describes these refugees and asylum seekers as sleeping all over the building in any place they can find. There are many problems that arise with the conditions created in this place but he also described the glorious worship and singing as they join in song and praise each day of the week His church is committed to a ministry to these refugees but also the countless of homeless people living on the streets around the building. They take food and medical care out each day in hopes of offering some healing and compassionate ministry in the name of Christ. Paul Verryn was part of the Truth and Reconciliation process in South Africa and has seen the best and the worst that his country has to offer. Paul is seen as controversial by some and a saint by others. He is willing to stand up for the downtrodden and ignored in his city and is quite vocal about it. Mark and I had the opportunity to sit down with him for about an hour and simply ask him about his understanding of the role of the Church in the world of today. This is part of what he had to say.
Paul Verryn is very clear about what he thinks the church’s role should be in society. He has great concerns that the message of Jesus has been distorted and forgotten as the Church has been too wrapped up in being an institution instead of representing the kingdom of God. He said: “The Church needs to go to the places of humanity and engage that humanity” living out its role in the places where real people live. The separation of secular and sacred has become too defined, the division needs to be much more blurred. The Church needs to find ways of really engaging with people’s hurts and pains for we have cut ourselves off far too much from where many people live and the Church needs re-engage. He said “The Church needs to be in places of death.” We need to be in the midst of people’s suffering and death, not cut off from it. The Church has a role to play, perhaps even a unique role, in bringing compassion and turning places of prejudice to places of hope.
Paul spoke of the Church’s role in holding up the injustices that the poor of our country and our world face. He said “If you say you are religious and have no relationship with the poor you are lying.” The face of God is seen in the poor he reminded us.
The Church’s calendar lived throughout each year really demonstrates what the role of the Church is all about. Having just come through Good Friday and Easter Day, the Church’s role is to see where there are still places of crucifixion taking place today. Where are the Calvarys in our neighbourhood and our city and province? Where do we still need to seek out resurrection in our midst? The Church must offer a ministry of healing and reconciliation that brings hope to the world. We have a role to play in pointing out the economic apartheid which continues to exist in the world even now. The Church must be seen in its local neighbourhoods speaking out for justice and a new vision of understanding and reconciliation.
Paul has a strong message to offer and it comes out of living each day with the poor and the forgotten of his country, where the pain and suffering largely goes ignored. Mark and I met Paul at First United (in the same neighbourhood as St. James’ parish) where it is not hard to see the suffering and pain in our midst but the same is true in all areas of the Diocese. Where is God calling the Church of today to live out hope and justice? It does not take long to see possible places in our city where hundreds of homeless and countless others are using food banks, soup kitchens and community meals to survive each day. What words and action does the Church of today have to offer?
Below from left to right: Father Mark Greenaway-Robbins, Bishop Paul Verryn, Archdeacon John Stephens