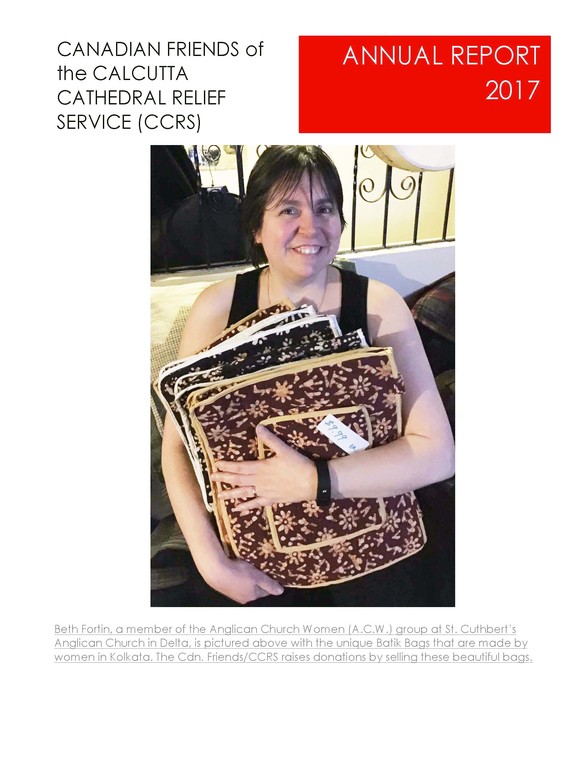 Sheila and the board and volunteers of Cdn. Friends/CCRS have published their annual report for 2017 and diocesan communications requested that it be shared through the communications vehicles of the diocese. Sheila was happy to share the report and she also included the following words of context:

“It doesn’t take many Canadian dollars to make a huge difference to families who live in the may slum communities in, and around, the vast city of Kolkata, India. One Canadian dollar becomes 50 Rupees.

I discovered this in 2010, when, as a tourist, I dropped into St. Paul’s Anglican Cathedral (consecrated in the 1840s) and discovered that the Cathedral’s outreach program - Calcutta Cathedral Relief Service (CCRS) - is supported financially by the Diocese of Derbyshire, UK.

I assumed that someone in Canada was sending Canadian dollars to support the women’s empowerment programs, the children’s free education initiative, and the free health clinics in the slums. Well, I discovered that there was no organized Canadian support for CCRS . After exchanging emails with the CCRS’s Executive Director, Mr. Rig David, I made the leap and decided to be that “someone in Canada,” and so the Cdn. Friends/CCRS was born. The BC government recognizes us as a small, grass-roots, non-profit Society. And we are proud to say that our wonderful donors support CCRS by collecting small change…because BIG CHANGE in the lives of marginalized people can come from mere coins.”

Diocesan communications also plans to be at the Cdn. Friends/CCRS celebratory and fundraising annual event The Penny Pot Tea,  Saturday, May 12, 2018, at Holy Trinity, White Rock when the very special guests the Bishop of Calcutta, the Right Reverend Ashoke Biswar and Mr. Rig David.

A downloadable PDF of the report is available linked below.

"Start where you are…use what you have…do what you can.”

— Sheila Johnston, Founding Director, The Canadian Friends of the CCRS.