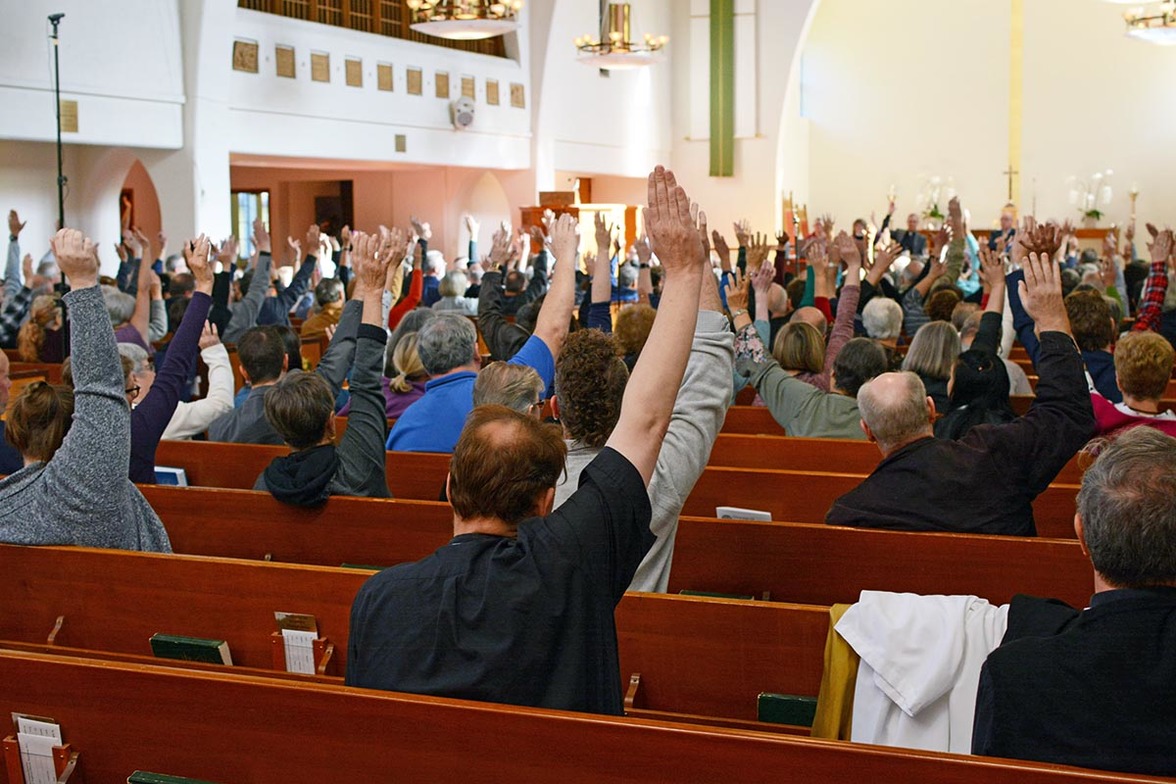 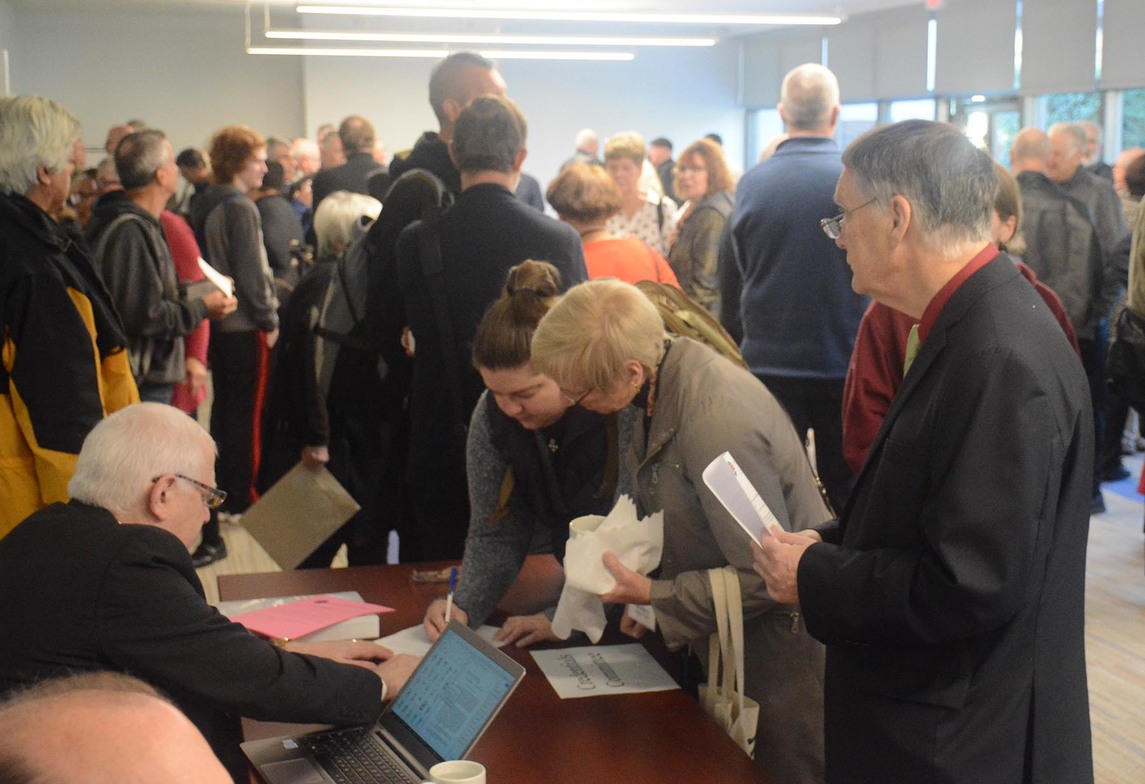 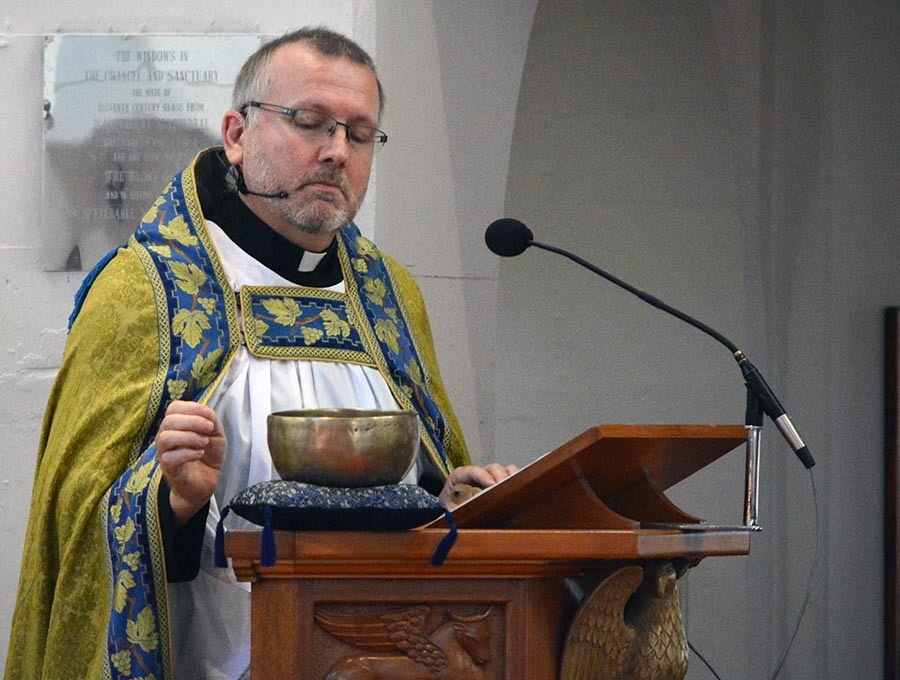 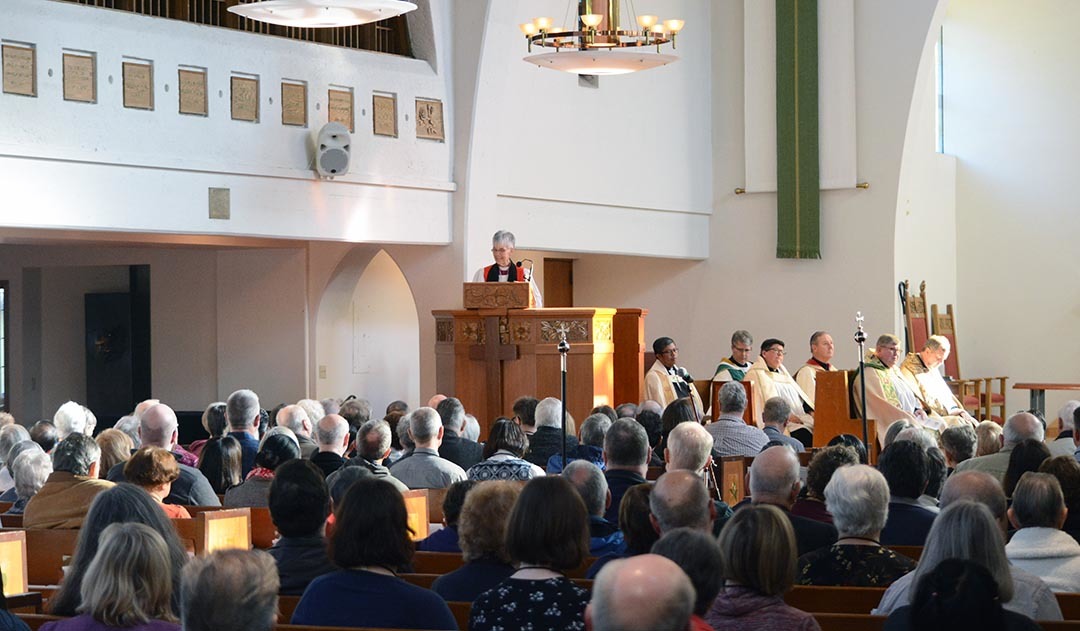 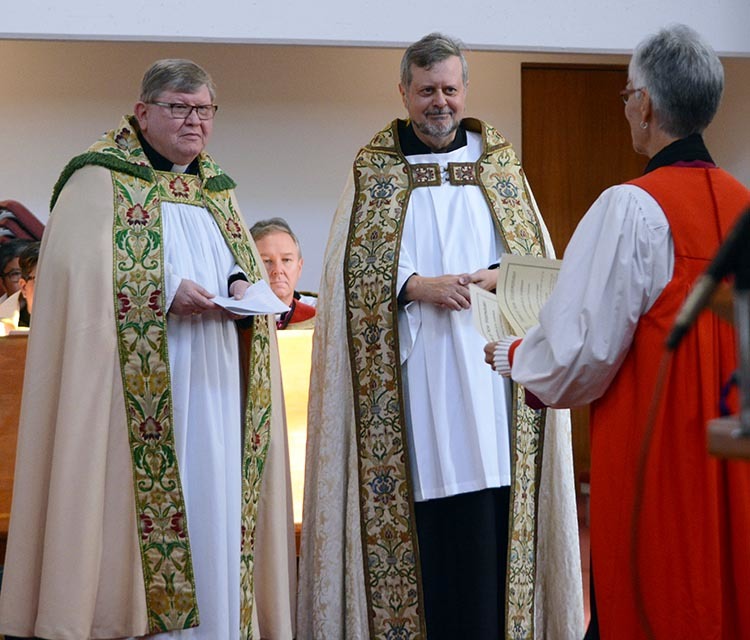 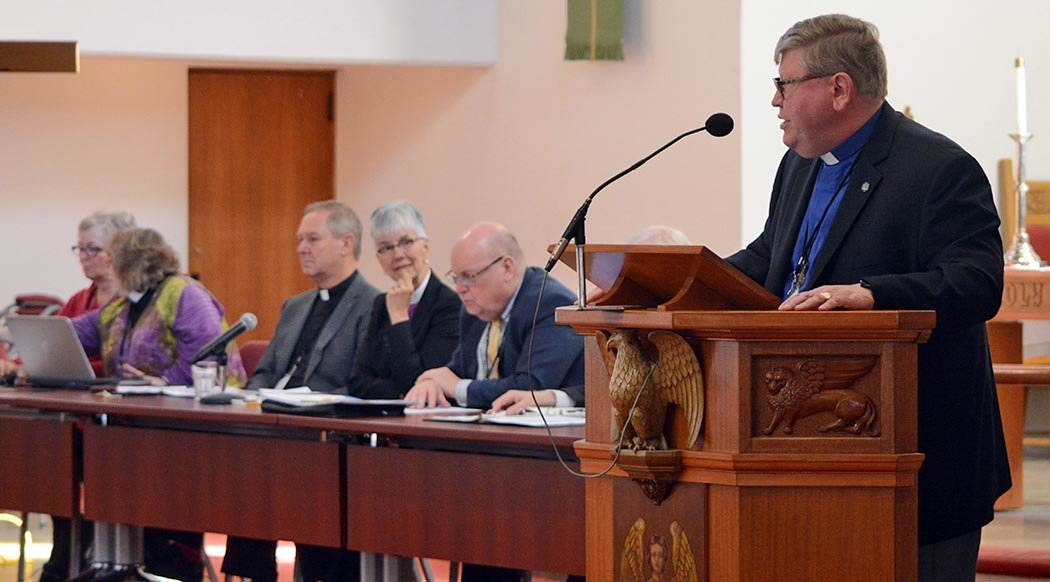 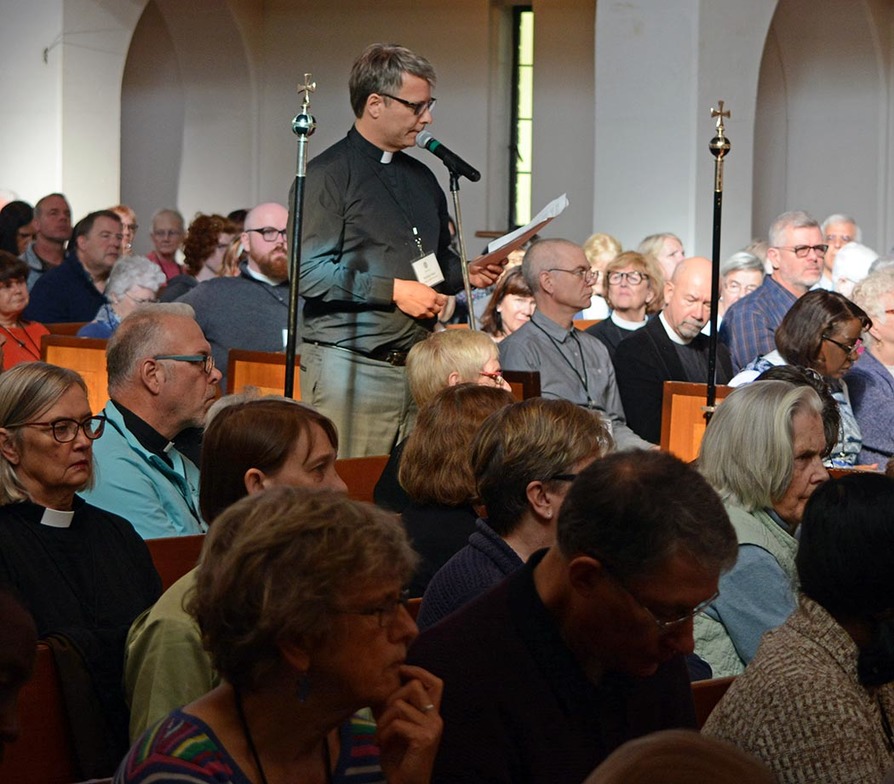 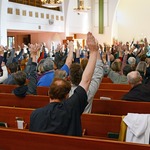 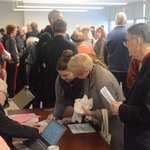 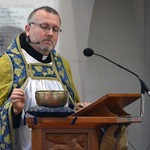 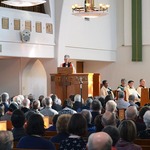 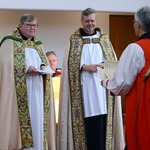 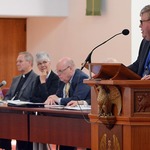 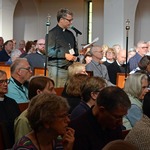 Registration had begun earlier at 9am, and the traffic of Synod Delegates through the Trendell Lounge at 1410 Nanton Avenue was brisk. Of 127 Clergy eligible for Synod, 94 were in attendance, and 146 of the 183 lay delegates were also present. A great turnout for a Synod with basically one agenda item;  voting on two resolutions previously approved by Diocesan Council to change Canon 2, the set of rules which govern how a Bishop is elected in the Diocese of New Westminster and Canon 3, the rules around the election of a Coadjutor, Suffragan or Assistant Bishop.

At 9:50am, the chancellor announced to the folks in the Trendell Lounge who were still enjoying hot drinks, morning pastries, fruit and conversation that it was time to head next door into the nave of St. John’s Shaughnessy (SJS) for Morning Prayer. This wasn’t just Morning Prayer, the liturgy contained a Reflection from Archbishop Skelton based on the reading, Luke 8:16-25 and there was also the Collation of Archdeacons. The Reverend Dr. Richard Leggett, vicar of Holy Trinity Cathedral and the Reverend Canon Kevin Hunt, rector of St. James’ were presented to Archbishop Skelton by the Dean of the Diocese, the Very Reverend Peter Elliott, and were then installed Archdeacon of Westminster and Archdeacon of Burrard by Dean Elliott. For those who do not know, an archdeacon is a priest who assists the archbishop in their episcopal leadership in the specific region of the diocese assigned to them. The office comes with the honorific, “The Venerable”. The Dean installs the regional archdeacons because they actually have a designated seat in the Cathedral’s chancel in the top row of the choir stalls.

(The text of Archbishop Skelton's sermon is available here)

Following worship, the archbishop, dean and archdeacons who had been vested for worship retired to the vestry to remove their vestments and Synod began. The first order of business was to suspend Rules 28-30 allowing the decision at this Synod which followed the discussion about the resolutions to be final, suspending the requirement for a second reading at the next Synod. The resolution to suspend was carried.

As spokesperson for the Constitutions and Canons Committee of Diocesan Council, the Venerable Dr. Richard Leggett had the responsibility of guiding Members of Synod through the 10 page document that make up the proposed new Canons 2 and 3. He gave some history behind the decision to launch the Canon 2 Task Force back in 2016, and the work that the task force, originally chaired by Dean Peter Elliott and subsequently chaired by the Venerable Stephen Muir had done to put together the content contained in the material to be voted on that morning. Many involved in the lead up to the Episcopal Election November 30, 2013, indicated frustration due to the tight deadlines and turnaround times, the inflexibility and the lack of transparency and consistency that the current Canon 2 rules created. A broad consensus view was that the deficiencies of the current Canon 2 negatively impacted on every participant in the process: search committee, electoral synod delegates, editors and technical people and of course… the candidates themselves.

For more details please download the 10 page Report of the Constitutions and Canons Committee containing the Resolutions that the Synod considered located below. It contains Canon 2 without the amendment to paragraph 237.

Following Dr. Leggett’s precis, the archbishop opened the floor for discussion and the first person to approach the mic was the Venerable Stephen Muir, Chair of the Canon 2 Task Force. He put forward an amendment to the first sentence of Paragraph 237. Paragraph 237 is as follows:

Each nominee must be nominated by at least six members of Synod, at least three of whom shall be ordained members and at least three of whom shall be lay members.  The names of the  nominators  shall  be  made  public  and  no  nominator  may  nominate  more  than  one candidate.  The Nominee must give their consent to their nomination to the Chair of the Episcopal Election Committee.

The proposed amendment was to change six members to four members, two ordained and two lay. With the amendment moved and seconded, the archbishop opened the floor for discussion of the amendment. There were a few people who addressed Synod including Archdeacon Leggett who spoke against the amendment. After approximately 10-15 minutes of discussion the vote was taken by a show of hands. The chancellor concluded that the show of hands was not definitive so he and the registrar, Donald Paul, ODNW asked that those in favour please stand; they counted that group and then he asked that those against the amendment stand; the two legal officers counted that group. They gave the results to the archbishop and she announced that there was sufficient support for the amendment to carry the motion.

Following a discussion about the legal nature of episcopal candidates’ eligibility led by Archdeacon John Stephens, the second of the two amendments brought forward at Synod was moved by the Reverend Al Carson, Rector of St. John’s, Sardis and Regional Dean of Valley Deanery and seconded by the Reverend Allen Doerksen, Vicar of St. Matthew, Abbotsford and Priest-in-Charge of St. Thomas, Chilliwack. This amendment also involved Paragraph 237. They asked that the first section of the second sentence, “The names of the nominators shall be made public…” be removed. The archbishop then called for discussion on the amendment and this amendment compelled a number of Synod Members to go to the mic and let their views be known. Those in favour of the amendment were generally concerned that identifying the nominators would lead to partisanship and division that might impede the electoral process. Those against, believed that identifying the nominators created a more positive environment of transparency and openness. When the amendment was put to vote it was defeated by a show of hands.

The archbishop then asked if it was time to “ask the question”, however there was an additional question for clarification of references in the resolution to the role of archdeacons. With this question resolved, it was time to vote, and the resolution to approve the Canon 2 and 3 revision was carried unanimously. Archbishop Skelton gave her assent and the new Canon 2 and Canon 3 were immediately in effect.

Prior to the adjournment of Synod, Archbishop Skelton thanked everyone for their participation “on a beautiful fall morning” and gave special thanks to Archdeacon Leggett for his tireless commitment to assembling a clear and concise document that accurately and comprehensively encapsulated the work of the Canon 2 Task Force, the advice of Diocesan Council and the suggestions from our diocese both Synod Delegates and diocesan members offered at the four preparation seminars held in September. The members of Synod jumped to their feet and thanked Archdeacon Leggett with enthusiastic and sustained applause before saying together, “The Grace”.