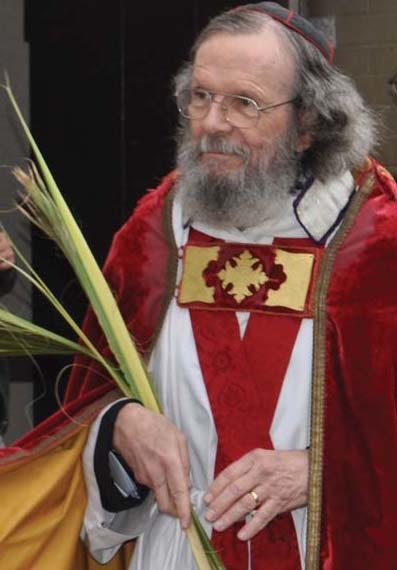 The Reverend Canon Douglas Elliott Williams died peacefully, in his 80th year, on December 19, 2017 in Vancouver, BC. The only son of Keith S. and Elizabeth D. Williams of Oxnard, California, he was born October 9, 1938 in San Bernardino, California. Predeceased by his eldest son, Zephyr Starwater (Gregory Donald) Williams (Surajit Bose) of Palo Alto, California, and his brother-in-law, the Reverend Dr. Donald E. Grayston; survived by his wife of 54 years, Helen M. (Grayston) Williams; daughters Catherine A. Hall (Anthony) of Greenwich, CT and Melody V. Williams of Stockton, CA; son Ian C. Williams and fiancée, Kristen L. Elliott of Kirkland, WA; granddaughters Elana A. Voigt (John Ryan) of Bremerton, WA, Brittany E. Ridgeway (Horatio) of Sacramento, CA; Haley V. Fowler of Stockton, CA, and great-grandchildren, Tristan and Milani Ridgeway.
Douglas was educated at the University of California, Los Angeles in Philosophy; Cuddesdon Theological College, Oxfordshire, UK; General, Theological Seminary, New York City, and most recently with a degree in Classics (Latin) and Medieval Studies from the University of British Columbia, Vancouver, BC in November of 2017. As an Anglican/Episcopal priest, Douglas served in the Diocese of Los Angeles, Diocese of California, and Diocese of El Camino Real, retiring as Canon Precentor of Trinity Cathedral, San José, CA, before retiring to Vancouver in 2000. In the Diocese of New Westminster he served as honourary assistant in the parishes of Christ Church Cathedral, St. James', and St. Anselm's.
Requiem mass will be offered at Christ Church Cathedral, corner of Burrard and Georgia, Vancouver, on Saturday January 13,  2018 at 11am. Clergy are invited to vest (purple stoles) and process.
Donations in memory of Douglas may be made to the Vestment Fund of Christ Church Cathedral, 690 Burrard Street, Vancouver, BC V6C 2L1.

Parking will be available in the Park Place Parkade (enter off of Hornby northbound {located on the north side of the lane from Cathedral Place Parkade}) at a cost of $5 per car. Code 4889 must be input into the ticket machine. The Sunday and Evening Cathedral Parking Passes are not valid on Saturdays.