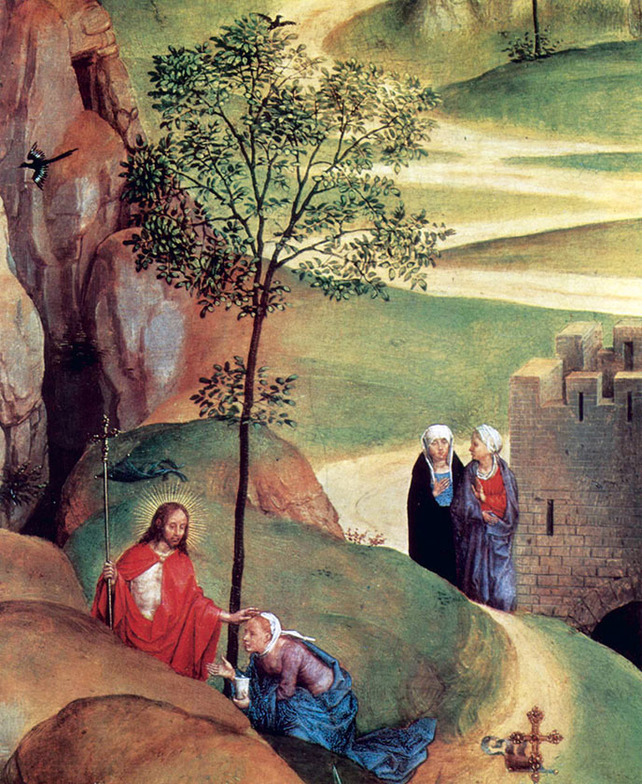 After the sabbath, as the first day of the week was dawning, Mary Magdalene and the other Mary went to see the tomb. And suddenly there was a great earthquake; for an angel of the Lord, descending from heaven, came and rolled back the stone and sat on it. His appearance was like lightning, and his clothing white as snow. For fear of him the guards shook and became like dead men. But the angel said to the women, "Do not be afraid; I know that you are looking for Jesus who was crucified. He is not here; for he has been raised, as he said. Come, see the place where he lay. Then go quickly and tell his disciples, 'He has been raised from the dead, and indeed he is going ahead of you to Galilee; there you will see him.' This is my message for you." So they left the tomb quickly with fear and great joy, and ran to tell his disciples. Suddenly Jesus met them and said, "Greetings!" And they came to him, took hold of his feet, and worshipped him. Then Jesus said to them, "Do not be afraid; go and tell my brothers to go to Galilee; there they will see me."

I have a whole list of words said to me by the right people at the right moment in my life, words that made a big difference. These words typically came at a low point or at a time of confusion for me.

These are some of the words or phrases I remember:

Someone I knew said: “Forgive,” when I was all stalled out by the hurt and resentment I harbored toward someone.

Someone I knew said, “Let go” when I had tried to pursue a path that over and over went nowhere.

Someone I knew said, “Chin up” when my heart was downcast.

Someone I knew said, “You can do this!” when I doubted my capabilities.

But in Matthew’s Easter account, unlike in the other Synoptic Gospels, the women actually encounter Jesus himself.

This, of course, sounds to us a bit like “Hey there,” the kind of greeting that anyone would give to someone that they recognized. But if you look more closely at the word Jesus actually uses here, you will see something significant.

In Greek the word that Jesus uses (and that is translated “Greetings”) is the word chairo, used in the plural. And according to commentators on the text, the word means more than a simple greeting. It means “Rejoice!” And so the first thing Jesus says after his brutal crucifixion, death and burial, the first thing he says upon being raised from the dead by the Creator of heaven and earth is “Rejoice!”—not a greeting but a kind of command to the women.

Because it’s easy to get so bogged down in what we believe is merely the mundane that we forget that, in Jesus, God became present in all of human life, signifying that God resides in all that we experience in our lives. Rejoice!

Because it’s easy to get so worried and fearful about the social, political, and environmental predicaments we are in that we forget that, in Jesus, God became subject to these same predicaments in a way that cost him his life.  And yet by the power of God, he was raised and restored, signifying that these predicaments will not overcome us. Rejoice!

Because it is easy to get so disaffected by the mistakes and shortcomings of the Church that we forget that, in Jesus, God ran so afoul of religious authorities that he was abandoned by them unto death.  And yet by the power of God, he was restored to life and became the one who shows us in the Church what to set our hearts on and what to direct our actions towards. Rejoice!