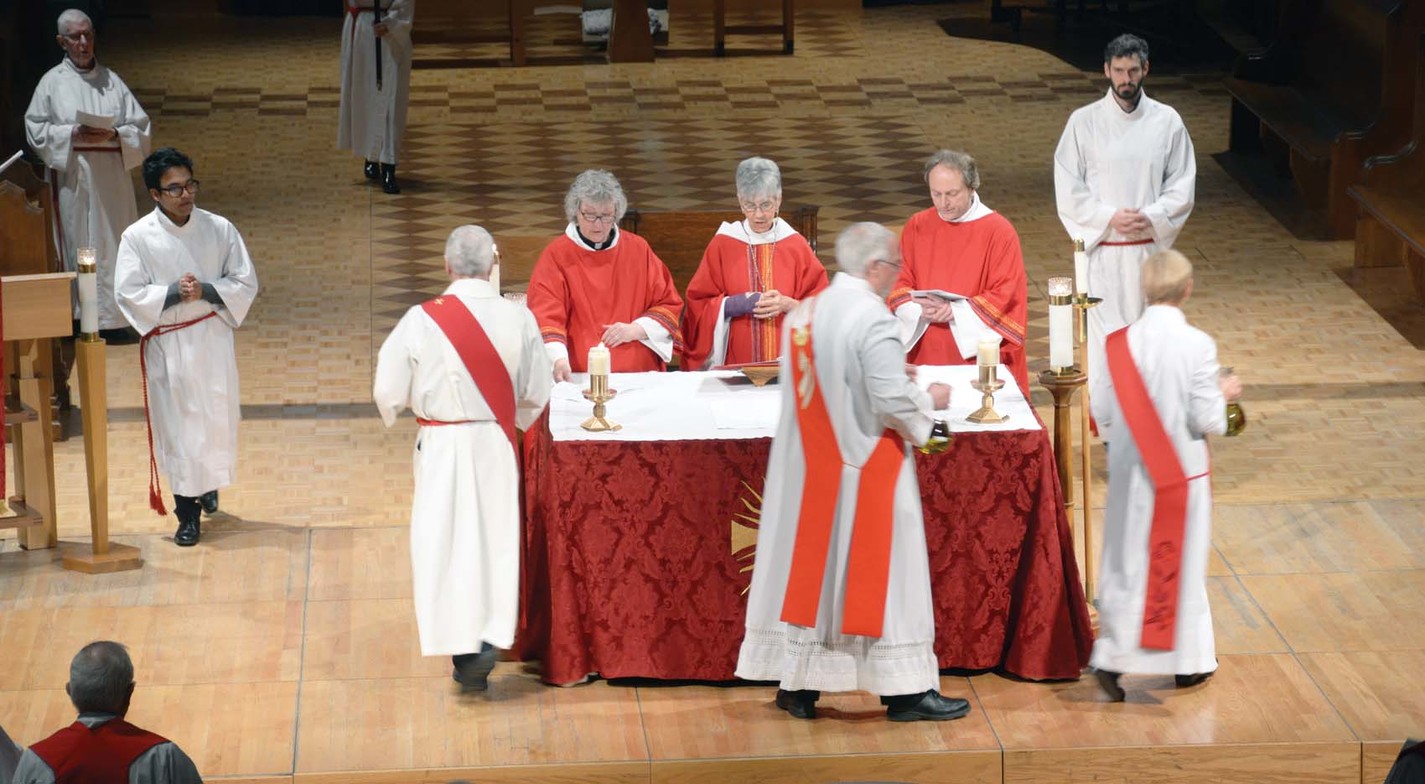 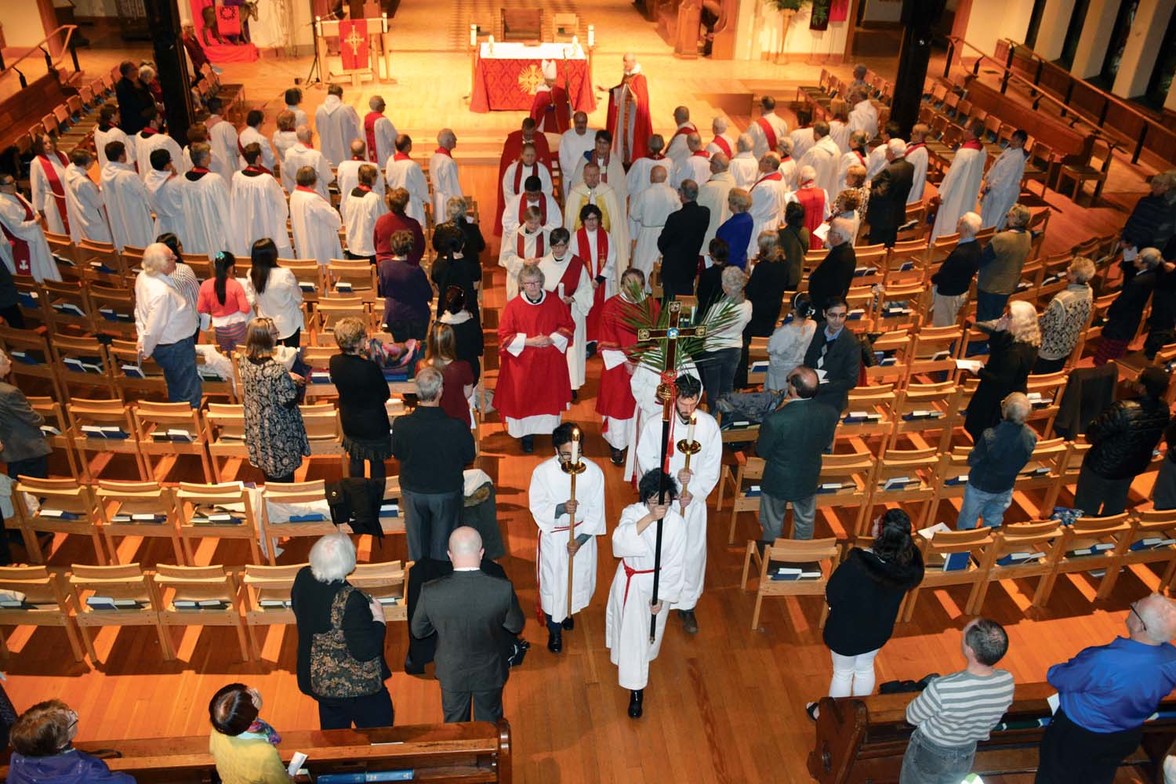 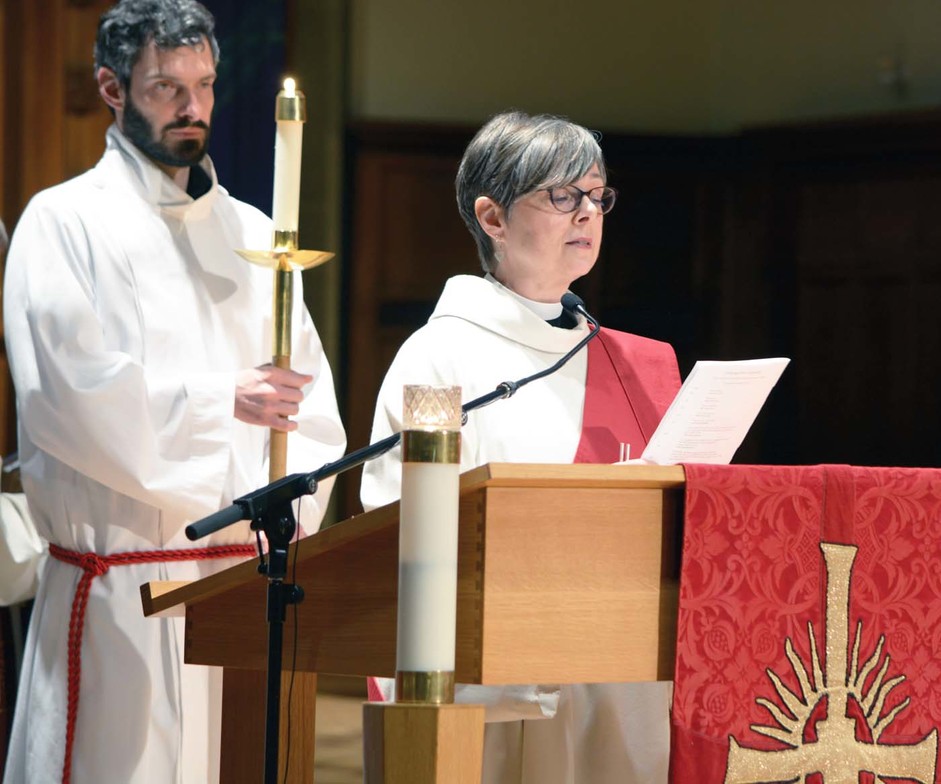 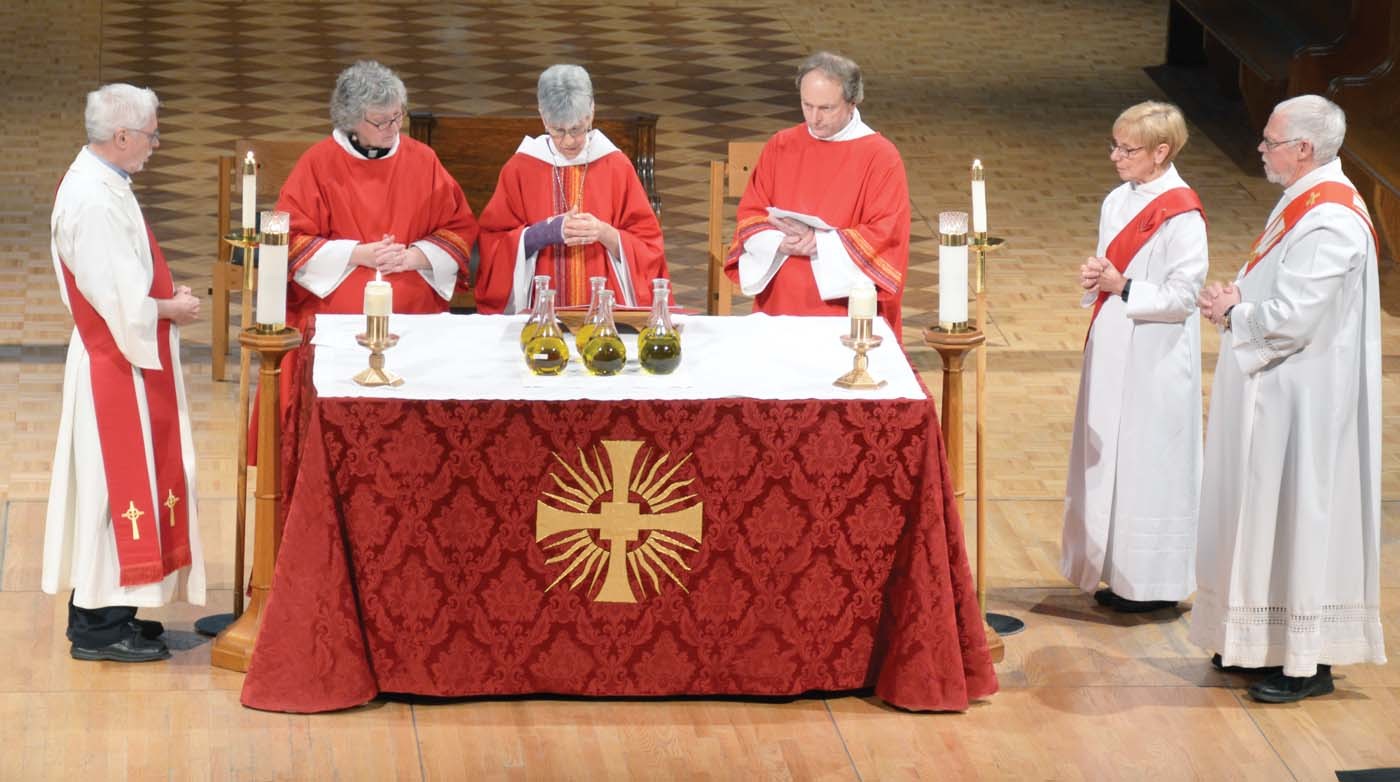 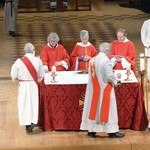 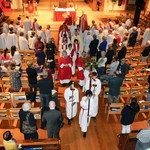 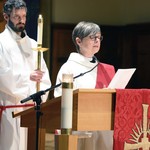 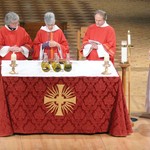 The Renewal of Ordination Vows and the Blessings of Oils celebrated at 12:10pm on the Tuesday of Holy Week is one of the many innovations in worship, learning and community-building that Bishop Melissa Skelton has introduced to the Diocese of New Westminster since her ordination and consecration March 1, 2014. It is also one of the most successful, not only in terms of increasing participation (particularly by the laity) but it is successful in that it has grown and developed into a prayerful, uplifting and inspirational liturgy that is truly one of the highlights of the year. At a time when clergy are experiencing the busiest and often most stressful week of the year, this liturgy comes along to refocus and energize.

The March 22, 2016 version was attended by more than 60 vested clergy and perhaps 20 more in clericals or mufti. This year’s version featured a few changes. The vested clergy did not process during the Litany. The Litany was led by a litanist, the Reverend Liz Hamel, a resident deacon at Christ Church Cathedral who is also the Anglican Chaplain to the Vancouver General Hospital. Rev. Hamel is a superb and accomplished choral singer and having her voice as the focus for the extensive prayer during the opening procession set the tone.

Lay people were involved in the liturgy as readers and communion administrators and the laity who participated on March 22 were gathered from all around the diocese.

In 2014, and 2015, a catered light luncheon was provided for the clergy following worship and it was strongly suggested that those who planned to eat registered in advance. This year, that was not the case, and the food lovingly and skillfully prepared by Bette Geddes and Associates Catering was offered to all who were present. With everyone welcome to eat together, and the vested clergy processing out at the conclusion of worship, changing and returning to the chancel for the meal there was a more relaxed and familial atmosphere than in previous years.

One thing that hasn’t changed is Bishop Skelton’s presence in the west chancel alcove following worship. After the dismissal, a long line-up consisting of dozens of lay and clergy formed on the west side, each taking their turn to receive the laying on of hands from Bishop Skelton and to share with her their desire for prayer and spiritual support.

The Peter Hallock setting chosen for Psalm 71: 1-17 was beautifully canted by one of Cathedral Choir’s tenor section leads, Byron Hanson and the Hymn choices accompanied by the Cathedral’s director of music and organist, Rupert Lang punctuated the worship perfectly. Particularly moving was the choice of Offertory Hymn, “My Song is Love Unknown” sung while Bishop Skelton incensed the altar following the placement there of the bread and chalice.

Bishop Skelton took the Gospel, John 12:20-36 for her Chrism Mass sermon text. As in previous years this sermon is primarily a message for the ordained folks, however there was a good amount of material for laity as well. The theme of her sermon came from the text, “Very truly, I tell you, unless a grain of wheat falls into the earth and dies, it remains just a single grain; but if it dies, it bears much fruit. Those who love their life lose it, and those who hate their life in this world will keep it for eternal life.”

“Dying and rising in our lives.” Bishop Skelton went on to examine how in her words, “the particular dimensions of dying and rising in the life of ordained people parallel the dimension of Benedictine life, something I spoke about when I first came to the diocese. The specific ways we need to practice dying and rising seem to parallel Benedicts’ notions of stability, obedience and conversion of life.” She then went on to examine: stability, obedience and conversatio morum, conversion of life as they apply to vocation.

The full text and the audio of Bishop Skelton’s sermon is available here, please click the link to access.

The reaffirmation of vows, and the consecration of chrism and unction, both occur within the larger context of the Eucharist, although the blessing of chrism and unction are part of a concluding rite and could be seen as less connected. However, what really ties the conclusion of the liturgy together is the congregational singing of the hymn, “Blest by the sun, the olive tree brought clusters of fair fruit to birth…” while deacons of the diocese collect the containers of sacred oils and immediately portion the contents into small jars for distribution to all the parishes of the diocese for the year’s upcoming baptisms and healing needs.

Although the next Chrism Mass is almost 13 months away please consider making plans now to attend on April 11, 2017.

A Facebook photo album on the diocesan facebook site, Anglican Conversation is accessible by clicking the link.