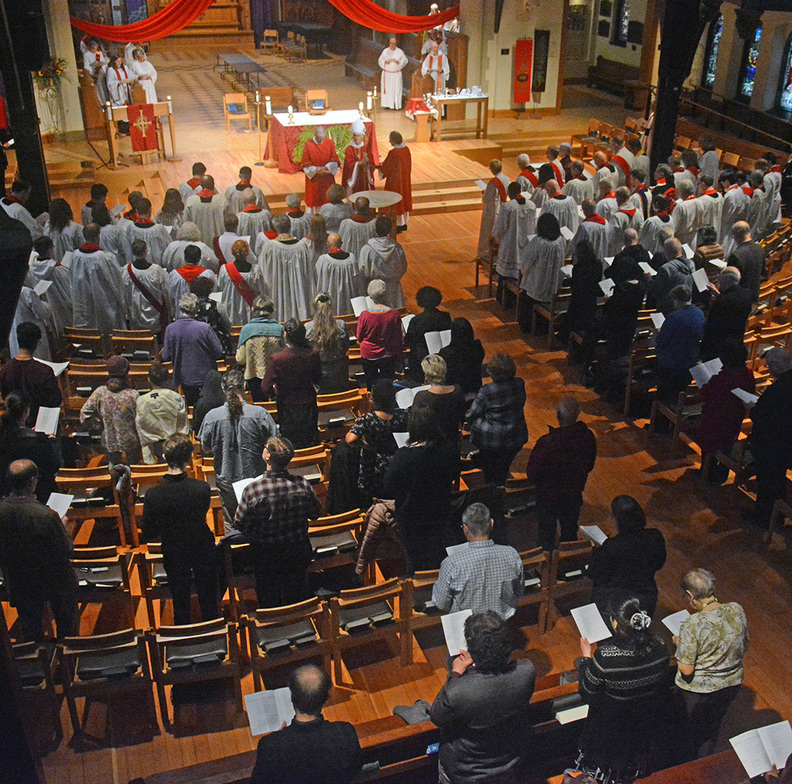 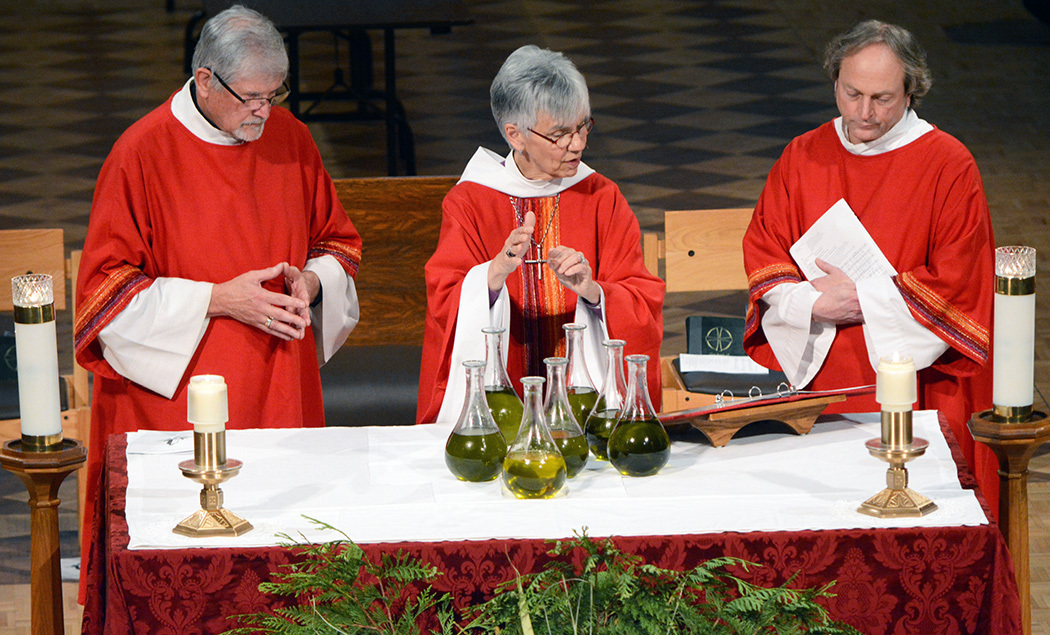 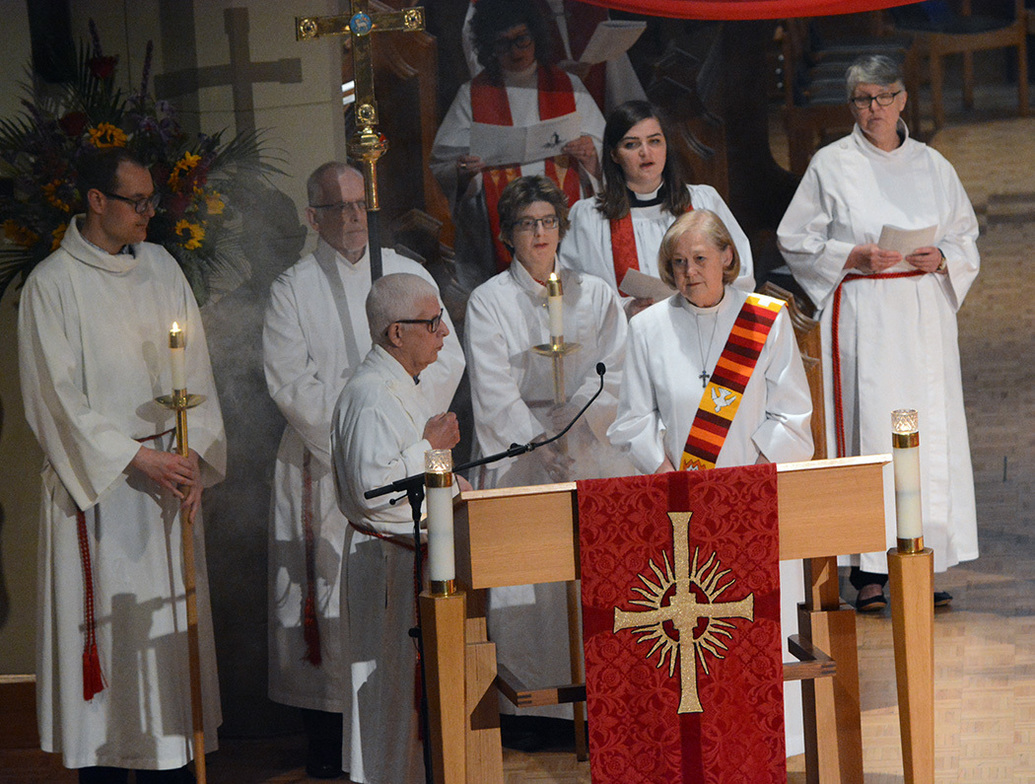 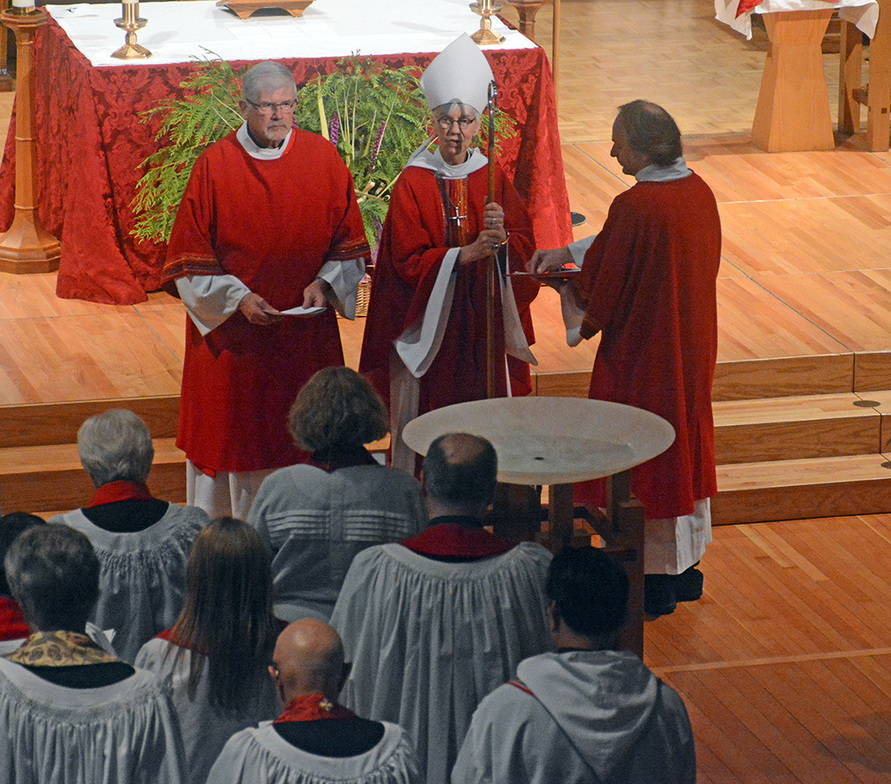 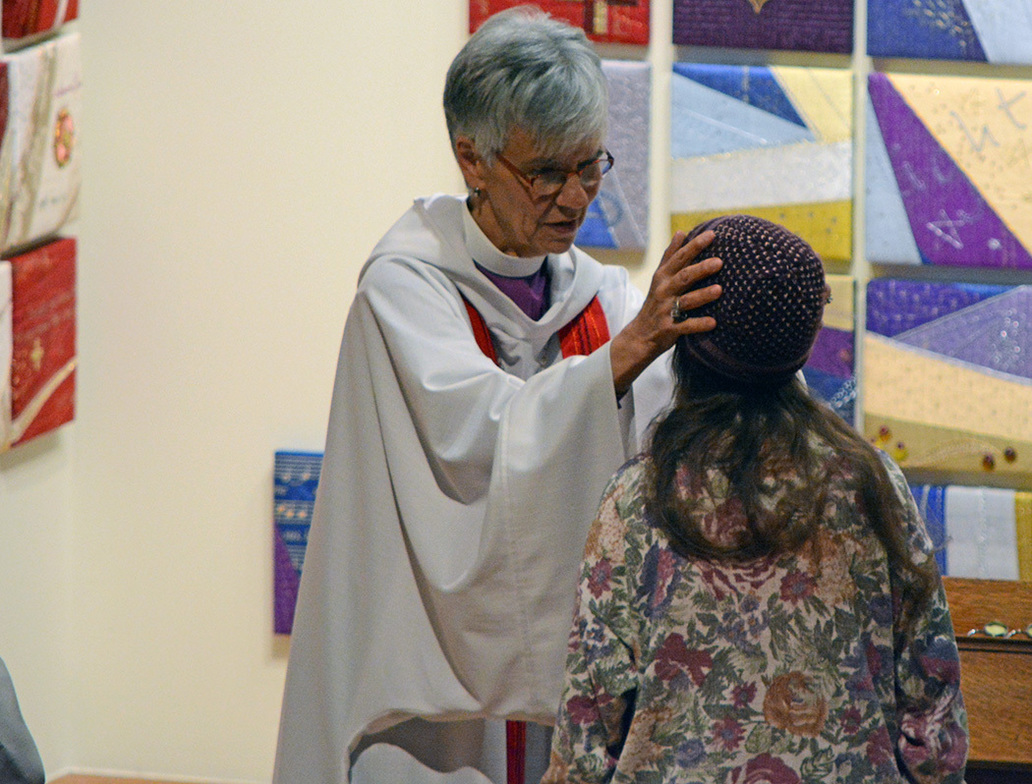 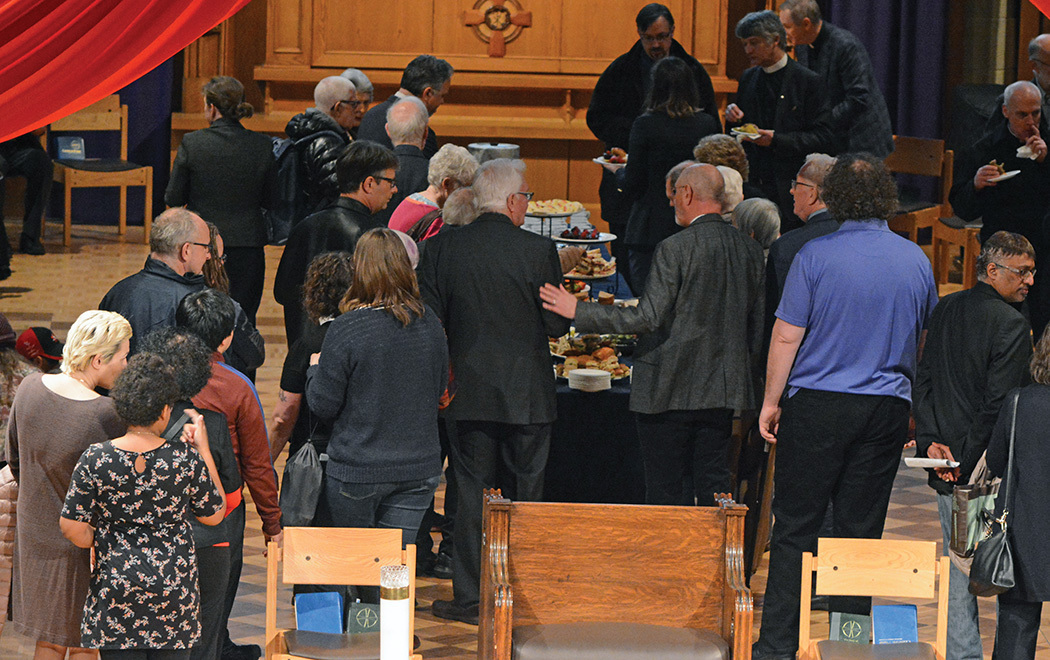 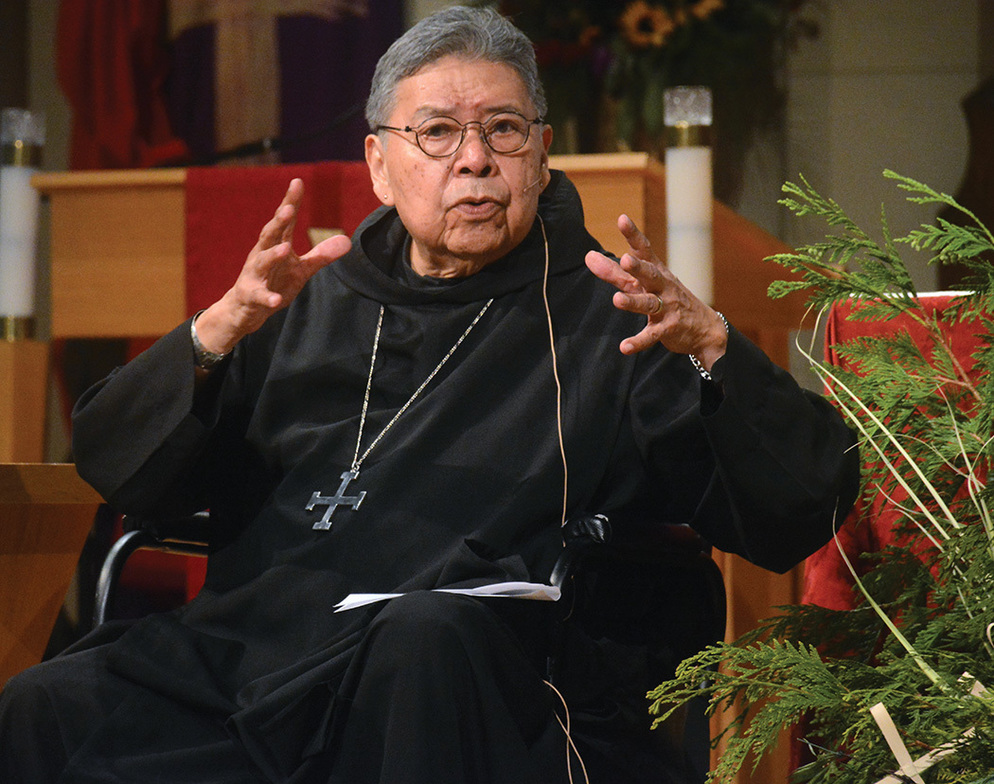 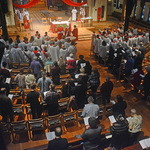 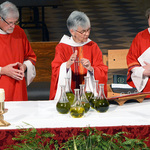 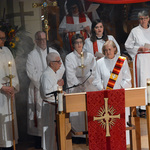 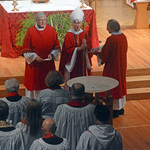 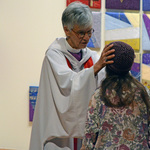 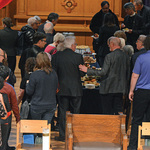 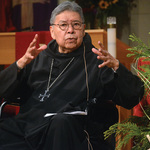 The Holy Eucharist with Reaffirmation of Baptismal & Ordination Vows and Blessing of Holy Oils was celebrated Tuesday of Holy Week, April 16 at 12:10 at Christ Church Cathedral.

For 2019, Archbishop Skelton blessed the two oils most commonly known in the western church: Oil of Chrism and Oil for the Sick, however this year she blessed a third oil, Oil for Catechumens for those who wish to use it. Catechumens is used to anoint those people who are preparing for an Easter baptism during Lent or to anoint those who are preparing for Confirmation at the beginning of their preparation.

Approximately 70 clergy of the diocese vested for the liturgy with many more joining the congregation and seated with the laity in attendance.

Dean of the Diocese of New Westminster and Rector of Christ Church Cathedral the Very Reverend Peter Elliott, DD was the preacher taking the Gospel for his text, John 12: 20-36.

(Follow this link for a video, audio and text file of the sermon.)

The music in worship was beautiful and prayerful beginning with Cantor, Jacob Gramit chanting The Litany while the procession moved through the nave to the chancel. Christ Church Cathedral organist and director of music, Rupert Lang accompanied the congregational singing and Jacob's choral music leadership, the two of them combining for a moving rendition of Ralph Vaughn Williams' "The Call (Come my way, my truth, my life)"

Following the Dismissal Archbishop Skelton moved to the west prayer alcove as a long line formed of clergy and lay wishing to receive the laying on of hands and anointing by the archbishop.

Bette Geddes Catering served a delicious lunch in the chancel and after a half hour the final part of the program began which was an inspiring talk given by the Reverend Canon Dr. Martin Brokenleg, OSBCn.

Canon Brokenleg was the guest preacher for the week at Christ Church Cathedral including the liturgies of the Paschal Triduum, the thee sacred days, Maundy Thursday, Good Friday and the Great Vigil of Easter at 5:30am on Easter Sunday.

He began his address following the Chrism Mass luncheon with emphasizing the importance of the "work of ministry" of both ordained and lay as those ministries were affirmed during that day's liturgy.

He spoke about cultural diversity which is much greater in Indigenous communities. For example, Europe has three language roots as the Indigenous community of North America have seven. He spoke about the spritual and cultural significance of drums songs. All the songs are in couplets and begin with a solo voice leading the melodic line, a melodic line which descends in a natural imitation of the calls of animals. He spoke about the importance and spiritual significance of "singing someone's song for them." Canon Brokenleg said that singing along with someone's song is "good manners". Through story and examples he built the metaphor that singing someone's song is a symbol of ordained ministry.

Canon Brokenleg's second focus connected to his affiliation with Benedictine communities, people of strong faith who follow canons, people who live by a vow. "Anglicanism is hugely affected by Benedictine communities". In quoting a favourite Benedictine theologian he said, "The Christian will be a mystic or they will not exist at all." Canon Brokenleg stressed the importance of Christian mysticism in the Benedictine way. New orders will not be cloistered, they will be more present and will fill a thirst not currently being filled by parish life where the parish is not "singing their song".

The third section of his address focussed on Reconciliation. He spoke about the trauma suffered by Indigenous peoples, "if you are seeing addiction, you are also seeing childhood trauma." He made reference to the work of Dr. Paulette Regan of the University of Victoria and shared her three directions for beginning the work of Reconciliation:

He concluded his address by circling back to the metaphor of personal song and left the audience with two questions: