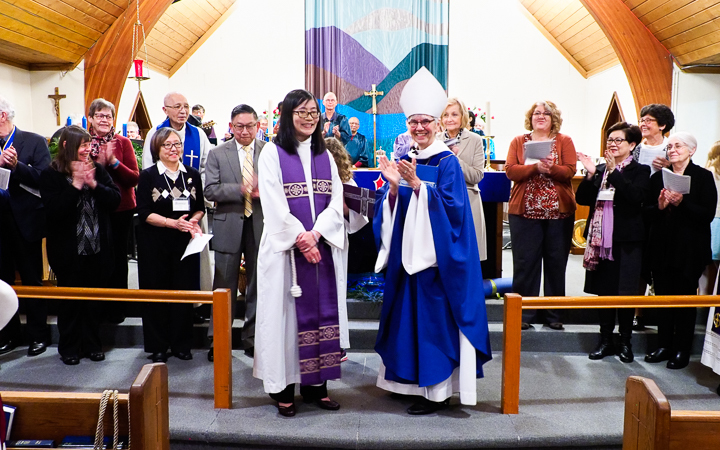 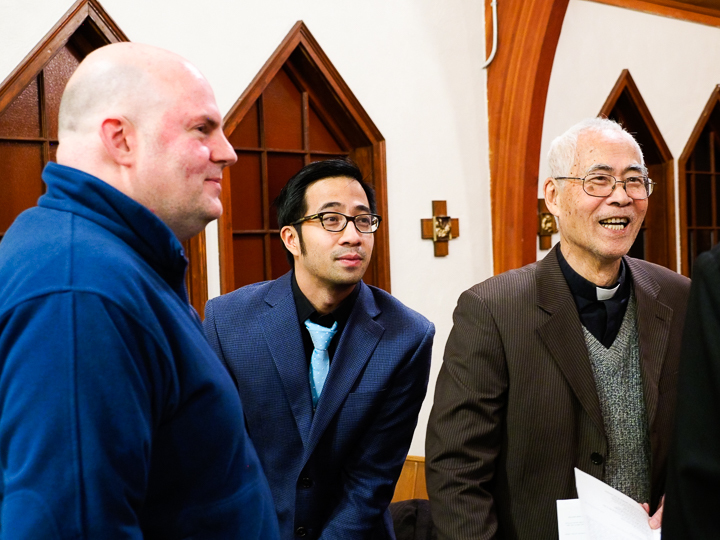 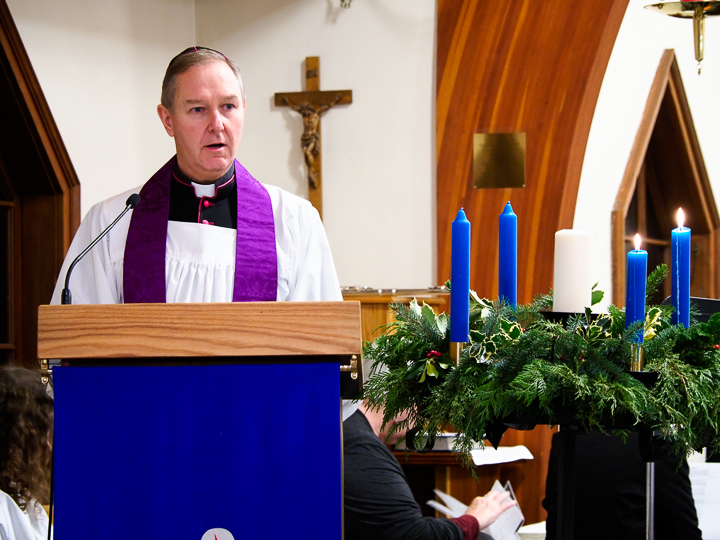 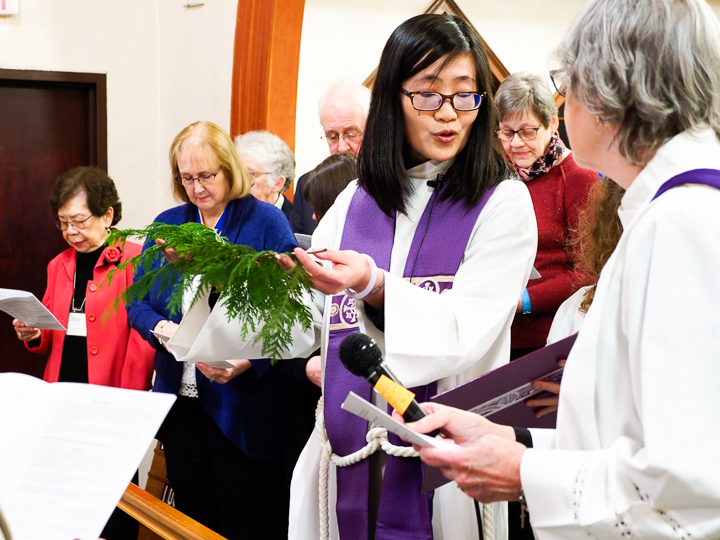 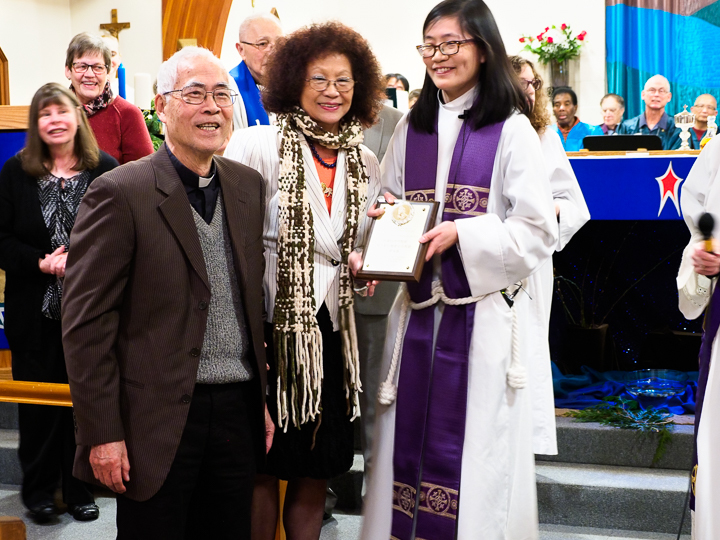 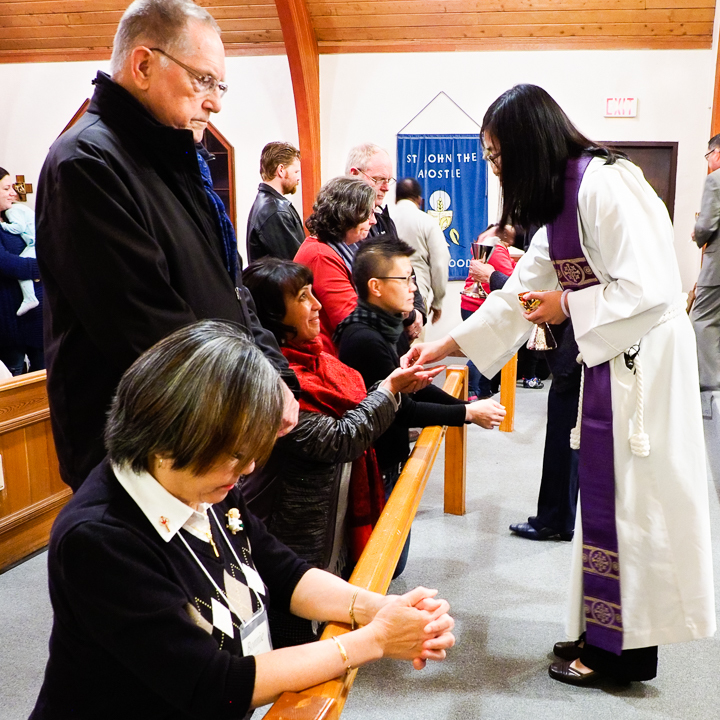 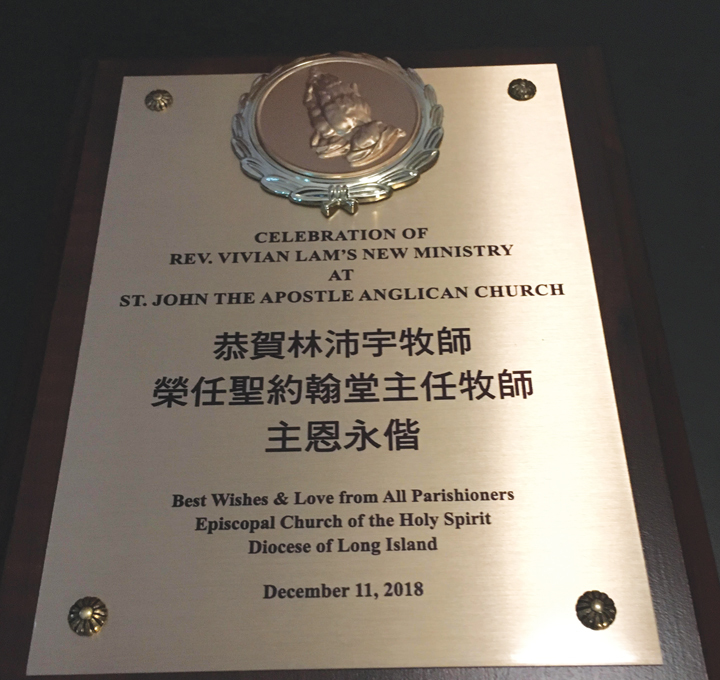 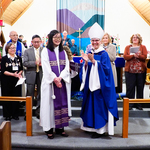 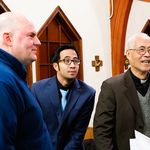 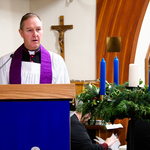 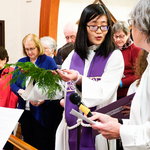 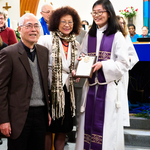 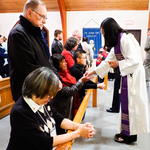 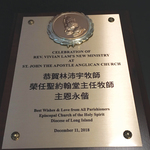 The Induction of the Reverend Vivian Lam as Rector of St. John the Apostle, Port Moody by the Most Reverend Melissa Skelton, December 11, 2018

The mission statement of the Parish of St. John the Apostle, Port Moody is…

“CALLED to be a Spirited Community at the heart of Port Moody TRANSFORMED through the experience of the presence of Christ and SENT out to share God’s Love.”

During the evening of December 11, 2018, at a Celebration of New Ministry that marked the induction of the Reverend Vivian Lam as Rector of St. John’s, the Community was definitely Spirited, and the presence of Christ was certainly experienced by the parish, visiting  clergy, visitors from around the diocese and beyond that constituted the capacity congregation.

The Reverend Vivian Pui Yue Lam arrived in the Diocese of New Westminster from The Episcopal Church in the summer of 2012, to begin her new ministry as priest-in-charge of the Parish of St. Matthias and St. Luke on September 1 of  that year. St. Matthias and St Luke is one of the four parishes whose buildings were returned to the trust and care of the Bishop and Diocese of New Westminster following the Supreme Court decision of June 16, 2011, regarding ownership of parish properties.

Vivian has many gifts which she not only shared with the parish where she served but also shared and still shares with the entire diocese and the greater community, specifically as a key member of the diocesan anti-racism training and facilitation team.

The Parish of St. John’s had been without a rector since the departure of their long time ordained leader, the Reverend Grant Rodgers who resigned in order to pursue his call to be an instructor in Anglican formation at Vancouver School of Theology beginning in September of 2016. The parish has been well-served by interim priest-in-charge, the Reverend Stephanie Shepard and more recently the Reverend Tim Morgan. Both Stephanie and Tim were present at the induction on December 11.

The Parish of St. John's has gone through some changes in recent years, the most significant one being the welcoming of members (non-stipendiary clergy and lay) of the former Parish of St. Margaret’s of Scotland which officially merged with St. John’s, February 15, 2014. Although that is almost five years ago it is always wise to remember that sometimes things don’t move or change quickly in the Church. However, although there may be bumps along the way this particular merger has been successful and the positive result was on display during the Eucharist celebrated on December 11.

Following the Opening Hymn, “All Are Welcome”, Charlene Aleck, elected Councillor of the Tsleil-Waututh Nation offered the Territorial Acknowledgement and Welcome. Prior to addressing the congregation, Councillor Aleck was the recipient of a blanket knitted for the occasion by Debora Jones-Akiyama and presented by some younger members of the parish. The councillor spoke about the connection that her people have to the land and specifically to the land where Port Moody is located. It is land that provided a rich life due to the abundance of wild life and the mild climate. Councillor Aleck, a direct descendent of Chief Dan George said that it was a “humbling honour” to stand before the congregation and be a part of this Celebration of welcoming a new priest.

The preacher was the Executive Archdeacon of the Diocese of New Westminster, the Venerable Douglas Fenton. It was through Archdeacon Fenton that the connection to Rev. Lam was made as he had worked with her during his nine years of ministry in the national office of The Episcopal Church located in Manhattan. Toward the end of his sermon (which is available {video and text} by clicking this link) he had these words to say about Vivian and how she will relate to her parish:

“I’ve known Vivian and worked with her on several projects over the past 16 years.  16 years!  (I know I don’t look old enough to have known her that long – but it’s true!)  I can attest to you that you have chosen a priest who prays, who has an unwavering faith, and a fearless tenacity.  Vivian is a true shepherd, seeking out the least, the last and the lost – caring tenderly for those committed to her care.  She is one who is listens with intention, calls out the best in others and prods and probes to get to the core of an idea or problem or possibility.

Vivian is one who will insist on collaboration, on partnership and on the entire community’s engagement.  Just one warning:  Vivian does not suffer wall-flowers gladly. She will ask you tough questions and remember that when she does, you asked for a priest who would do so.  Expect to be challenged—remember, you asked to be challenged.  She will be persistent.  Remember you asked her to be persistent.  Expect to be called forth to offer the gifts you have been given.  And know this:  in doing this work together the Christ on whom we wait will be made present in this place.”

The presentation of the symbols of ministry was a little more robust then at most Celebrations of New Ministry. In addition to the: Bible; water; oils for anointing and healing; Canons of the Diocese; keys to the buildings, Prayer and Hymn Books; and the elements of the Eucharist, bread and wine there were also: groceries, cedar boughs for blessings and a Yoga mat. When the 23 members of the parish had each participated in the 11 presentations they all remained on the chancel steps behind the new rector, symbolizing the formation of the new shared ministry.

One of the highlights of the liturgy was the presence of Vivian’s mother, Nancy; father, the Reverend Peter Lam and her brother Jonathan who had made the trip from New York. Not only were they there to support their daughter and sister, they were also the official delegation from Episcopal Church of the Holy Spirit, Brooklyn (Diocese of Long Island) which is Vivian’s home congregation that sponsored her for ordination. Vivian was kind enough to send in a photograph of the plaque which is included in this post.  Vivian explains, “the Chinese is not exactly the same as the English, but the gist of it is ‘Congrats to Rev. Pui-Yue Lam, Rector of St. John’s. May God’s grace be with you forever.’”

Best Wishes & Love from All Parishioners

Episcopal Church of the Holy Spirit

In closing here are the words that Archdeacon Fenton shared with the congregation when he reminded them about the choice they had made:

You wrote a parish profile, advertised and got some amazing priests who, together with you, discerned whether they were being called by God to be your next rector.  Your profile had a list of ‘Who We Seek’:  if you don’t remember the list the keys characteristics are:

1.    Not to be afraid to ask tough questions

2.    Willing to guide in study, justice and faith

4.    Connected with the wider diocese

You held the list up against the Reverend Vivian Lam and said – yes, this is an amazing match.  You discerned that Mother Vivian had what you wanted, you recommended to the Archbishop Skelton that she be appointed and the archbishop agreed.

Congratulations to the people of St. John the Apostle, Port Moody, guided by the Spirit they with the support of Archbishop Skelton have made an excellent choice.