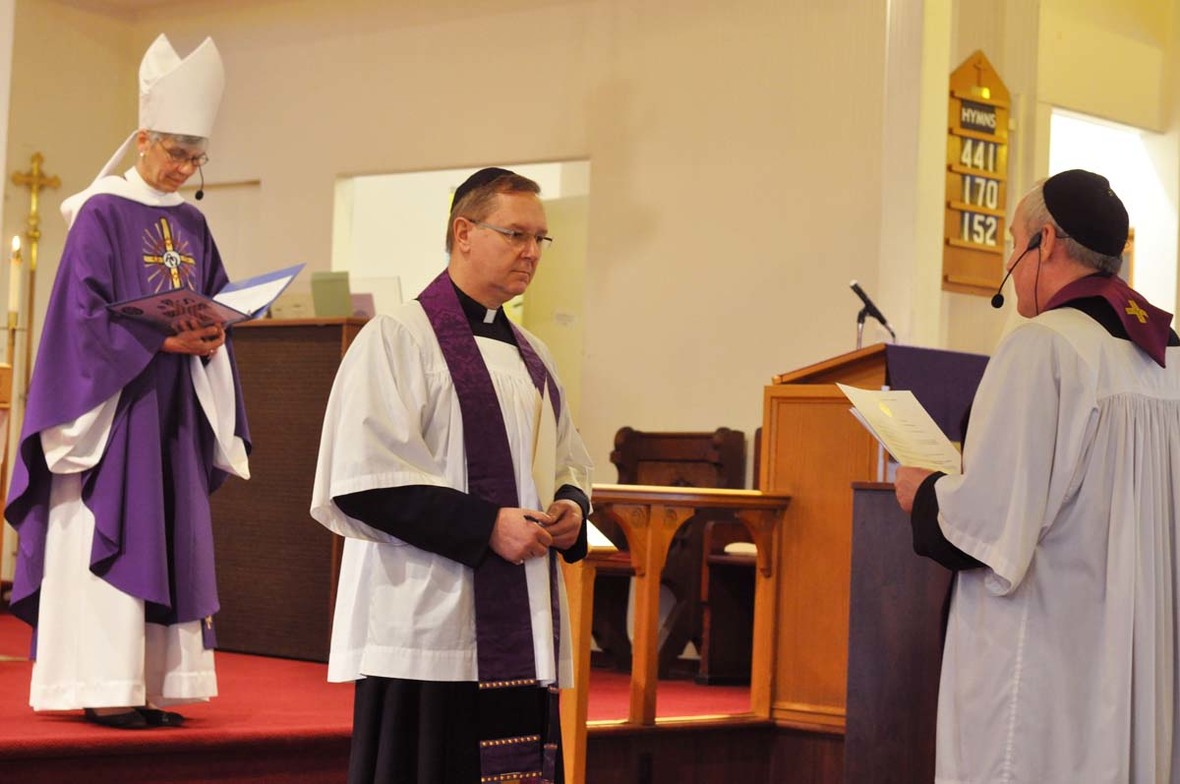 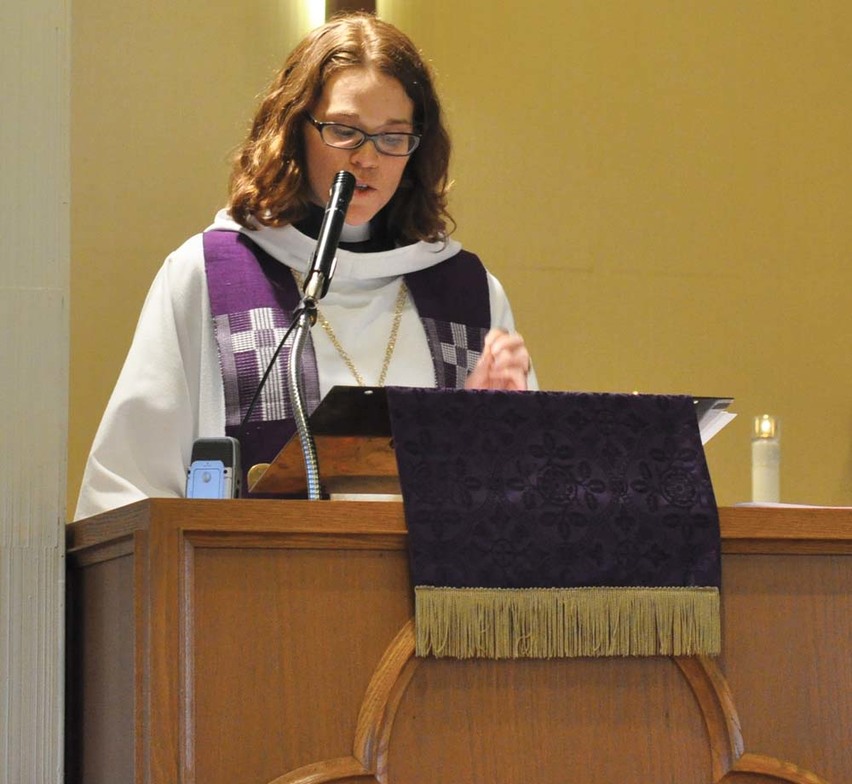 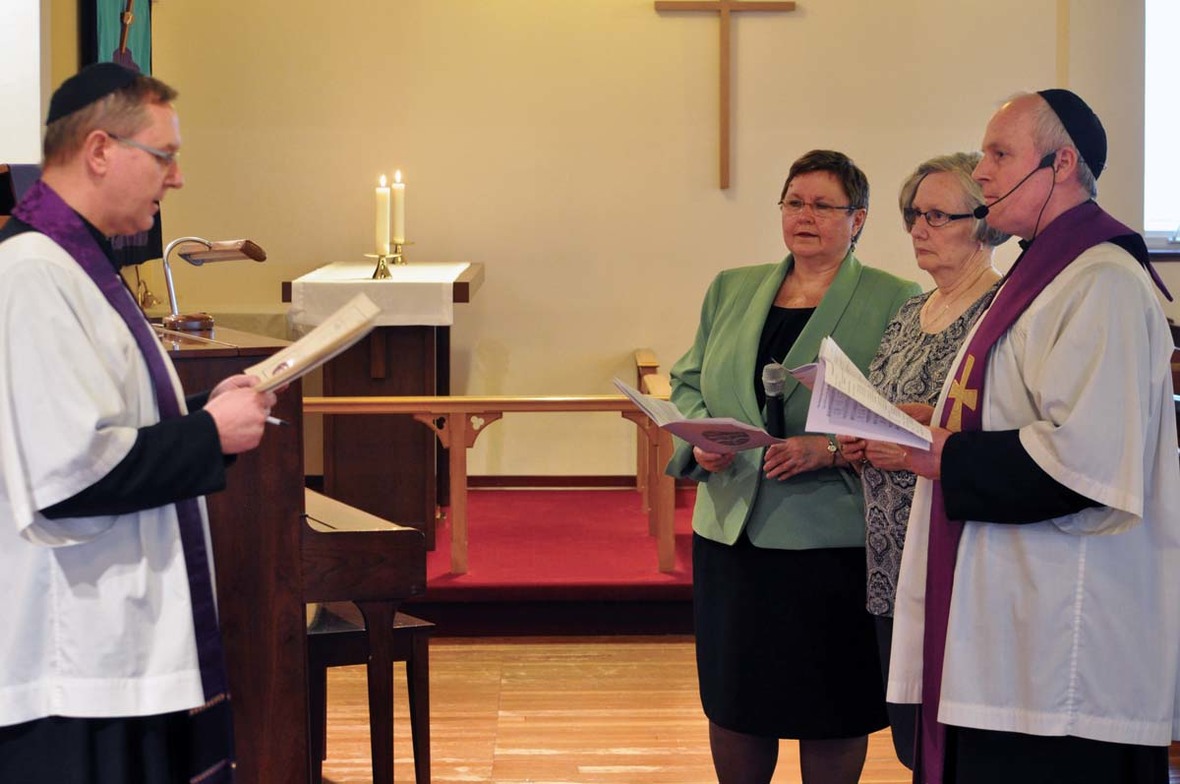 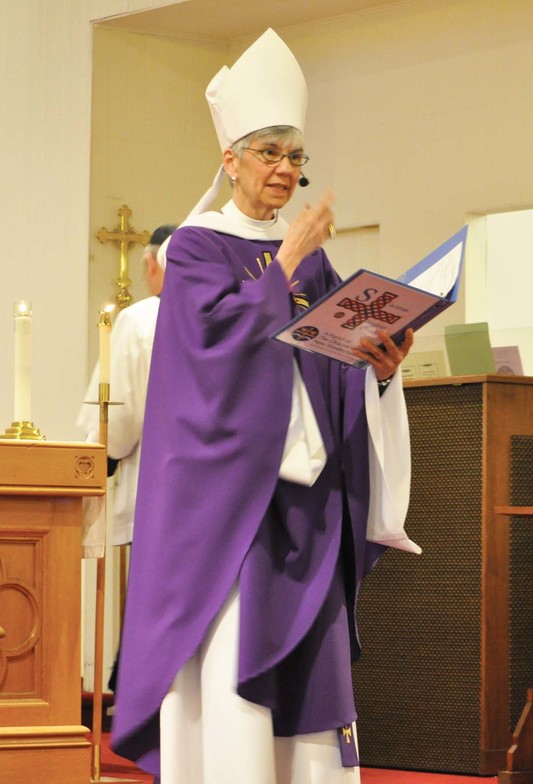 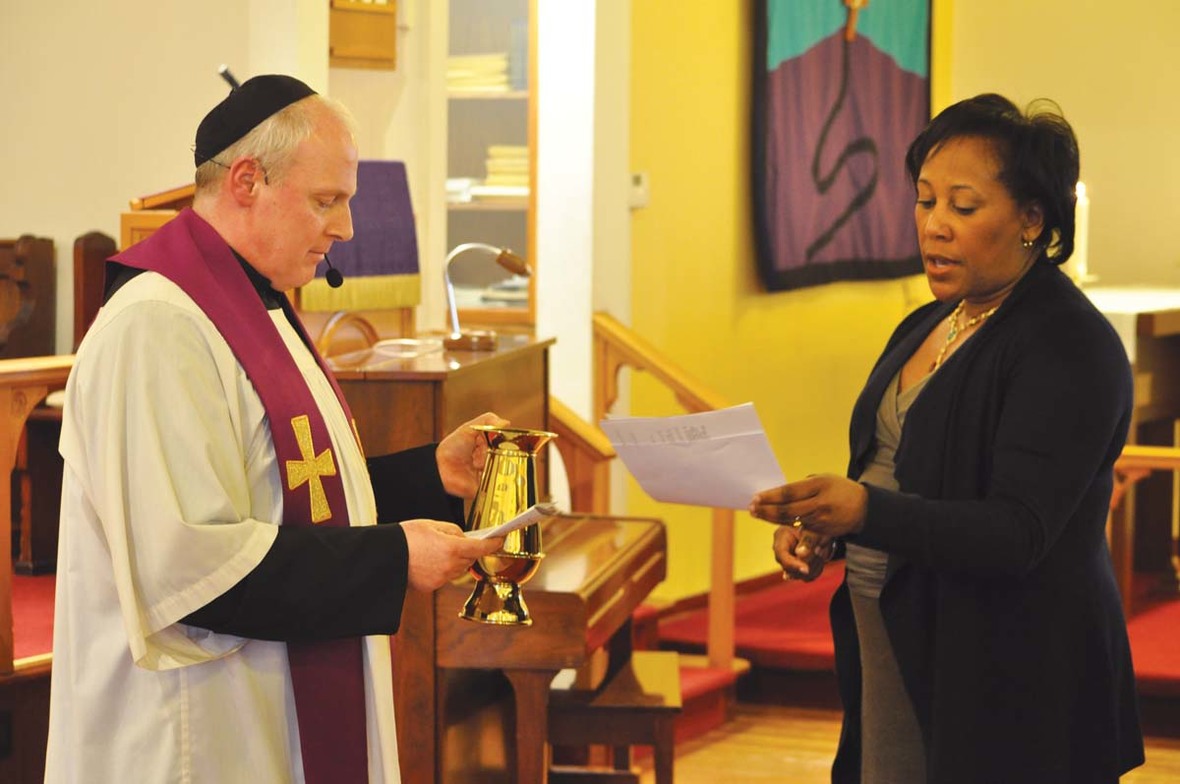 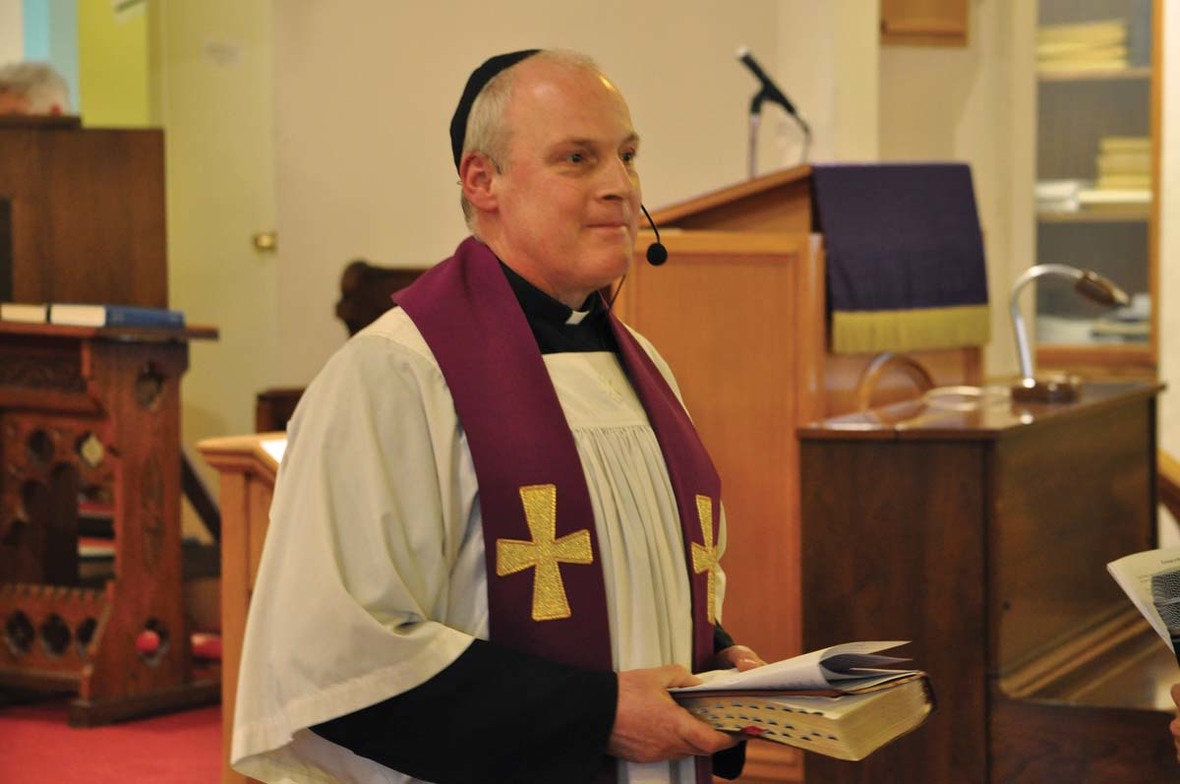 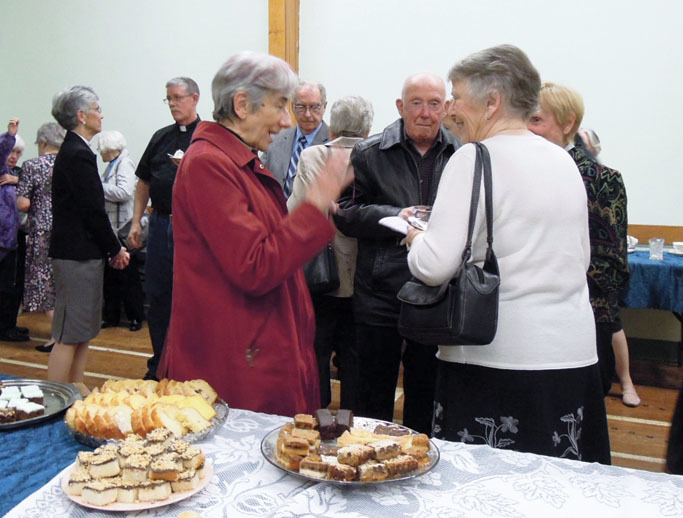 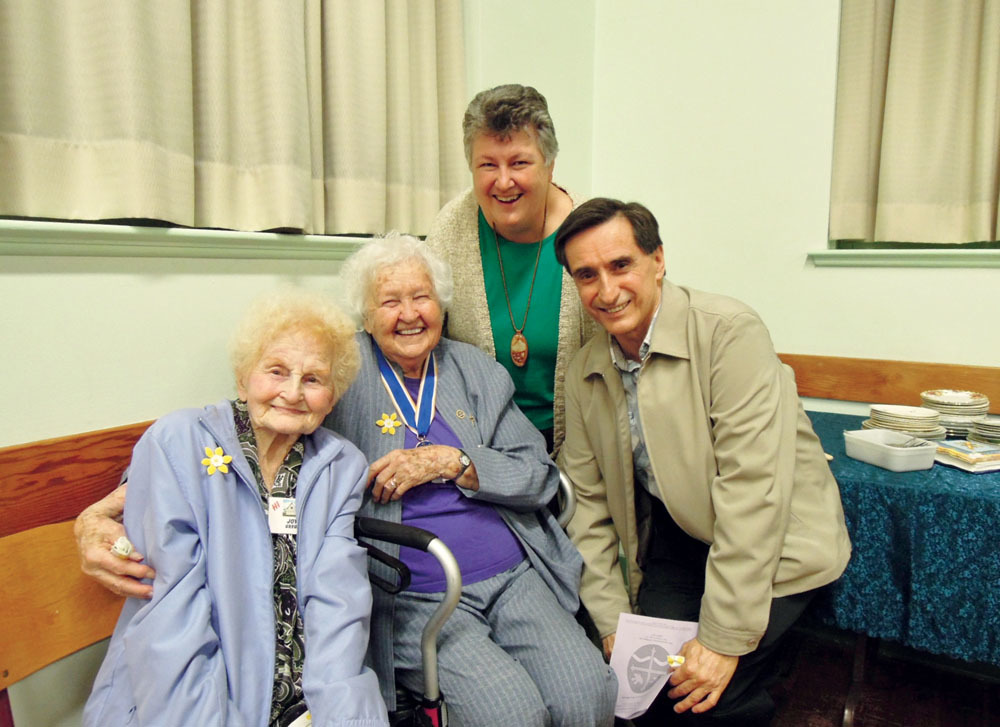 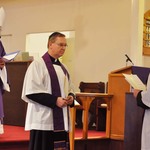 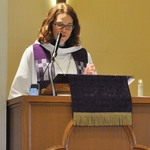 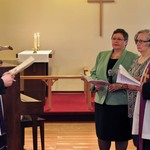 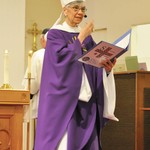 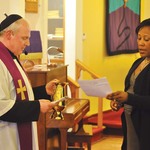 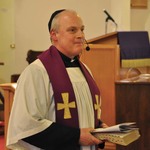 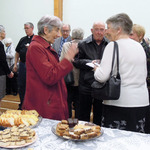 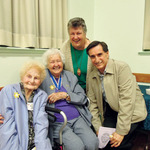 There was a little bit of history made in the Diocese of New Westminster on Wednesday, April 9th, 2014, during a Celebration of New Ministry at St. Thomas, Vancouver. The principal focus of the Eucharist was the Induction of St. Thomas’s new rector, the Reverend Michael Batten by the Bishop of the Diocese, the Right Reverend Melissa Skelton. Now the induction of a new incumbent is historic on its own but this particular induction was the first of Bishop Melissa’s five week old episcopacy.

Michael Batten is not new to East Vancouver having just completed a 9 year incumbency at St David of Wales located about 8 kilometres north and a little bit west of St Thomas’s location on East 41st Avenue, so he is well versed in the particularities of that region of our diocese. One of the great benefits of St. Thomas’s location is its close proximity to First Lutheran Church, and the wonderful relationship that has grown between the two congregations over the past few years.

In celebration of that continuing relationship, the preacher for the liturgy was Pastor Lori-Anne Boutin-Crawford of First Lutheran. Early in her sermon she said that she “is in awe of this community’s devotion to Christ Jesus” and that “you are a beautiful and friendly community.” She also voiced her appreciation for the use of the St. Thomas rectory that she and her family have rented for the past two years. Included in her homily were interludes when Pastor Lori-Anne sang quite beautifully the song, Take, O Take Me by Tony Alonso, John Bell and Gabe Huck from their Lenten Communion Rite. When this song is used during the Celebration of Communion during Lent the four lines are each sung three times. Pastor Lori-Anne maintained the consistency of the ritual by singing it near the beginning of her address, near the middle and at the end.


She commented that it was fitting that Michael, an advocate for social justice and equality would be installed on the church calendar day when William Law, the 18th century English Christian mystic is remembered. William Law wrote a very successful book entitled A Serious Call to the Devout and Holy Life which generated an income and allowed him to spend much of his life doing good works for those around him. Pastor Lori-Anne proceeded in her address continuing to focus on social justice as she listed the recent intentional actions of the St. Thomas community, their work with Metro Vancouver Alliance and their boots-on-the-ground approach to raising awareness of the marginalized in their East Vancouver neighbourhood.

With a twinkle in her eyes and hint of a smile playing around her lips, Pastor Lori-Anne admitted that she has been watching Michael and is beginning to get a sense of who he is. His wit and self-effacing humour are characteristics that she has noticed, but when she asked him what his greatest gift was he said that it was his stability. Michael is committed to his relationship with St. Thomas, he doesn’t “flit from Parish to Parish.”


Near the end of her homily Pastor Lori-Anne said “Michael has unique gifts, gifts of grace, given by God. And the Parish of St. Thomas also has gifts, gifts of grace. May you share what God has given you with each other and the world for we follow the One, Christ Jesus, he who calls us. He summons out who we are called to be, not who we think she should be.”

After the sermon it was time for the Covenant in Ministry, the Venerable Douglas Fenton, the Executive Archdeacon of the Diocese presented all who were gathered with a brief outline of the process that had taken place leading to the induction of the Reverend Michael Batten as incumbent. Michael then made the required Oaths and Subscriptions in the presence of the Bishop and the Congregation. Then it was time for Bishop Melissa Skelton to ask for the first time “Do you, in the presence of this congregation, commit yourself to the responsibility entrusted to you?” To which Michael responded “I do”, she then requested that the people of the parish stand and she asked, “Do you the people of the parish of St. Thomas, commit yourselves to share with Michael in the ministry of the parish?” to which they answered “We do.” An historic moment.


Following the Covenant in Ministry members of the parish participated in the Presentation of the Symbols of Ministry of the Whole People of God to Michael. Next, there was a welcome to the East Vancouver Deanery by the senior priest present, the Reverend John Marsh of St. George’s, Vancouver. John was quick to point out that Michael is hardly new to the deanery and that he didn’t want to follow the current trend of the Burrard Archdeaconry of giving bouquets of flowers to new rectors. He explained that over the years he and Michael would occasionally get together for lunch and over platefuls of Italian cuisine they would commiserate about why everybody else didn’t think the way that they do. John said that he had seen an episode of the Canadian restaurant rating show, You Gotta Eat Here that featured Neighbours restaurant located just blocks away from St. Thomas’s so he thought that a gift certificate for a lunch for two was a good welcome gift, as long as Michael takes him along of course.

After Michael was introduced by the Bishop as the leader of St. Thomas’s shared ministry and prior to the celebration of the Eucharist, Michael briefly addressed the congregation. He thanked the prior priest-in-charge, the Reverend Margaret Marquardt who “planted the fruit that is ripening” and he thanked Pastor Lori-Anne for her homily and stressed how much he values the relationship with First Lutheran.

There will be challenges ahead for the East Vancouver parish and their new rector, but what they have now which may have been lacking in their life as a faith community is commitment and stability. They share in the knowledge that they will be there for each other and that they will do their best to grow together into the full stature of Christ.

Images: Top, The Reverend Fr. Michael Batten reads the Oath in the presence of the St. Thomas Congregation, guests, Bishop Melissa and Archdeacon Douglas Fenton. Upper right, the preacher for the Induction was Pastor Lori-Anne Boutin-Crawford of First Lutheran Church. She spoke of Michael Batten's passion for Social Justice shared by the faith community of St. Thomas. And she said "I am in awe of this community's devotion to Christ Jesus." Middle left, The Executive Archdeacon of the Diocese of New Westminster, the Venerable Douglas Fenton reads the license before Susan Chortyk and Jackie Fennelle, the Wardens of St. Thomas'. Middle right, For the first time in her five weeks as Bishop the Right Reverend Melissa Skelton asked this question, "Do you, in the presence of this congregation, commit yourself to the responsibility entrusted to you?" The Reverend Michael Batten answered "I do." Lower left, During the Covenant in Ministry, Michael is presented with the water of baptism by Audrey Henry Q.C. Lower right and homepage, Michael looks out on the congregation after receiving the Holy Bible during the Covenant in Ministry. Below 1, Reception in the Parish Hall (Photo by Elaine Jan). Below 2, A happy group of St. Thomas’s parishioners (Photo by Elaine Jan).