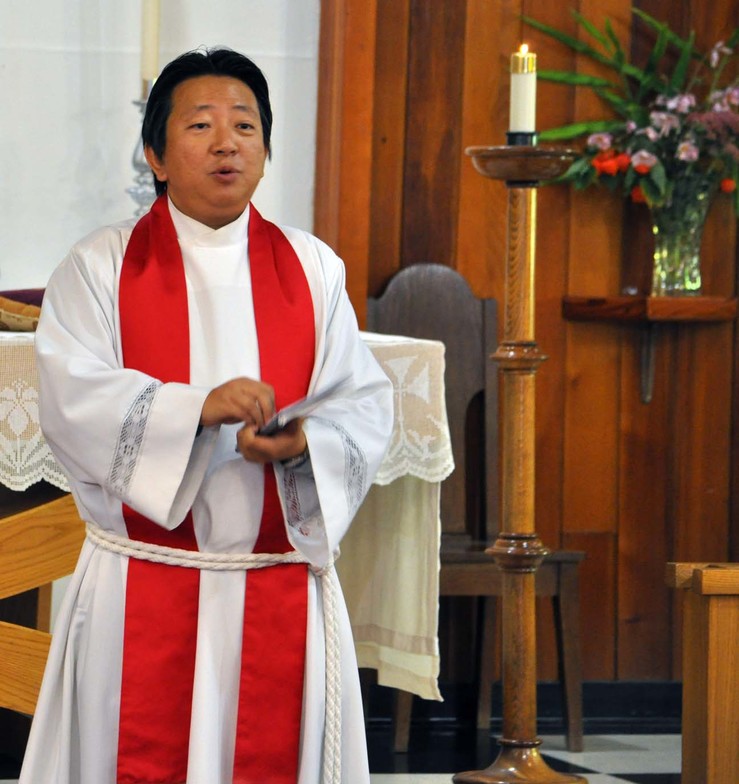 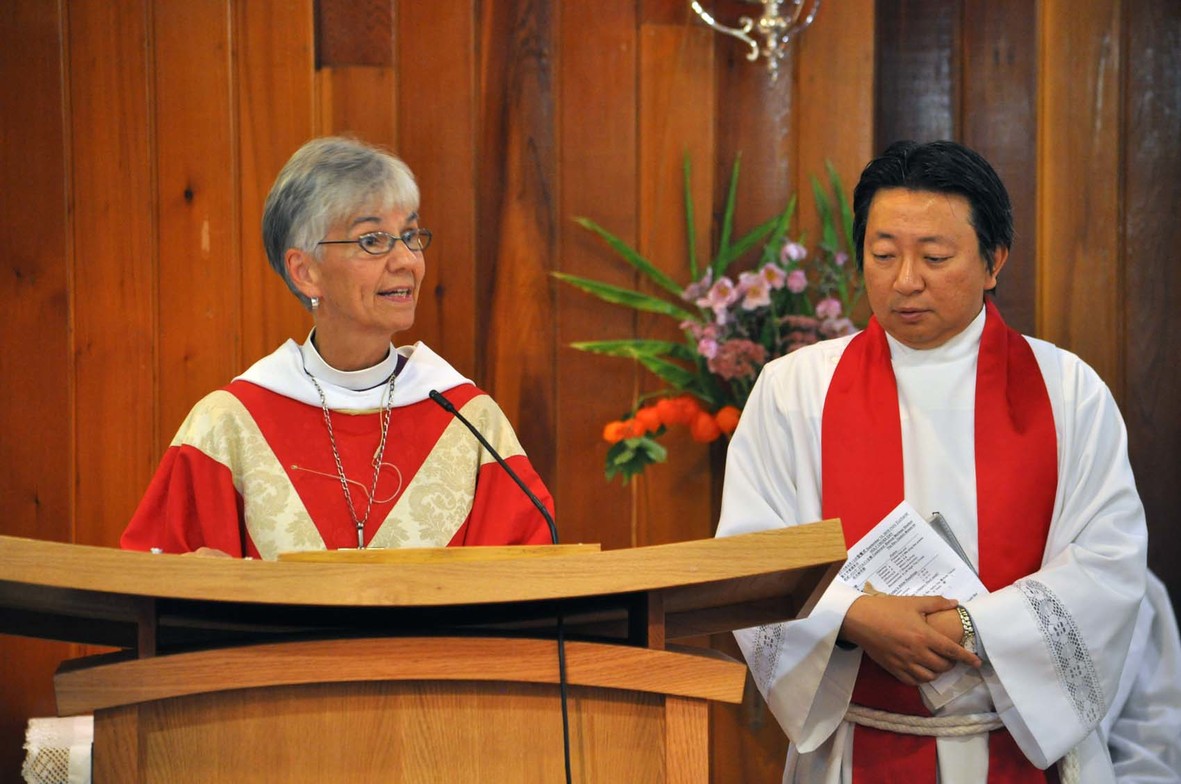 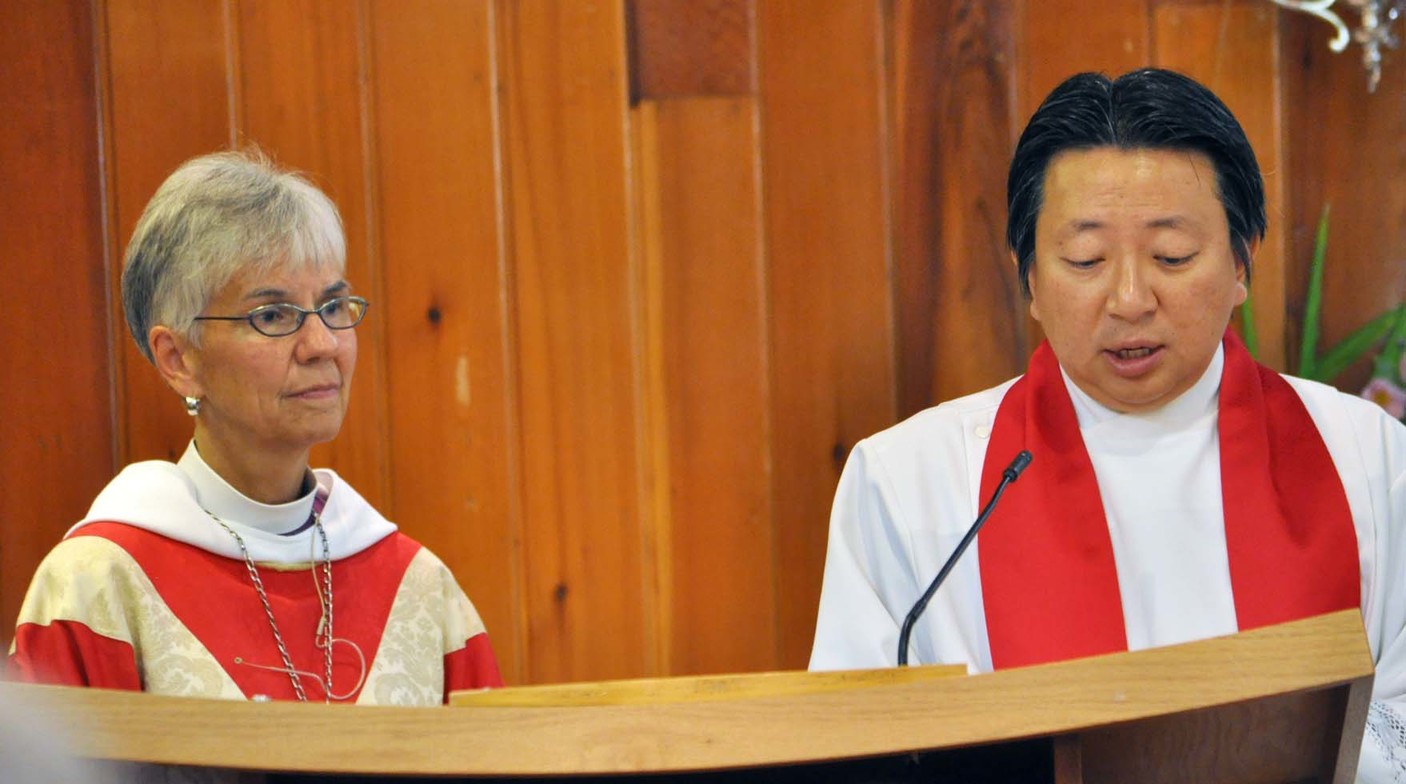 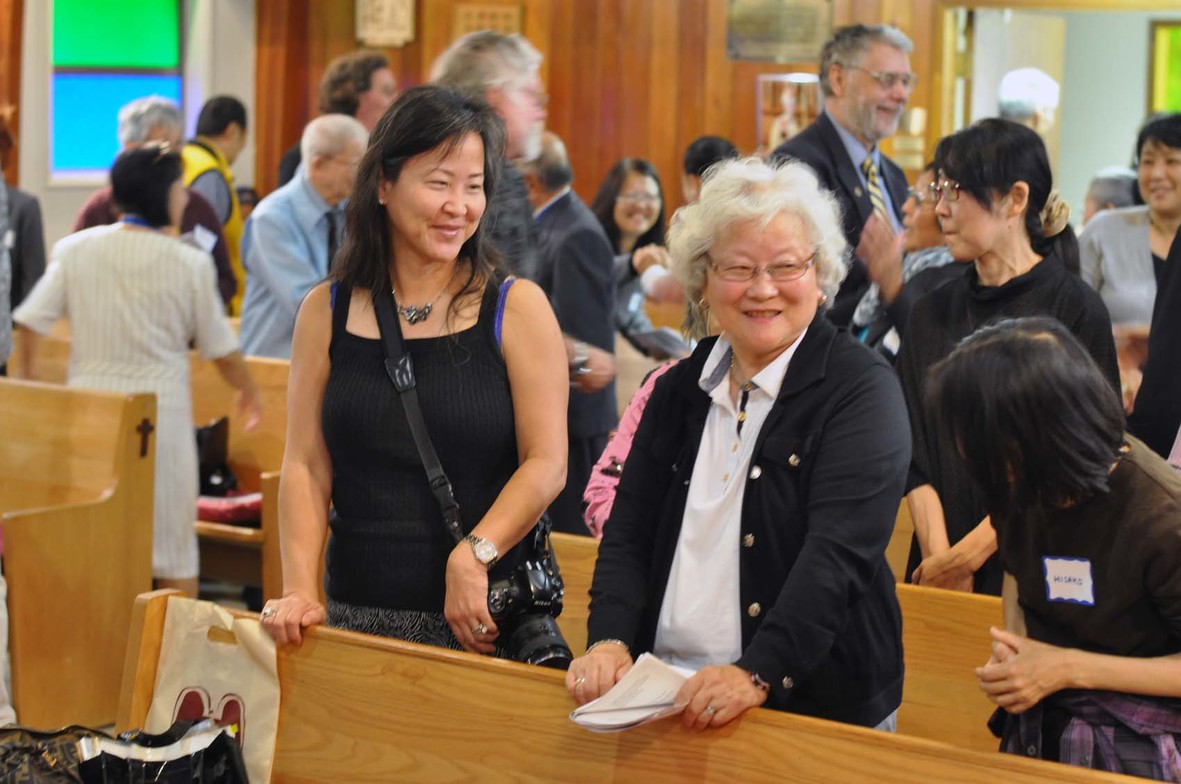 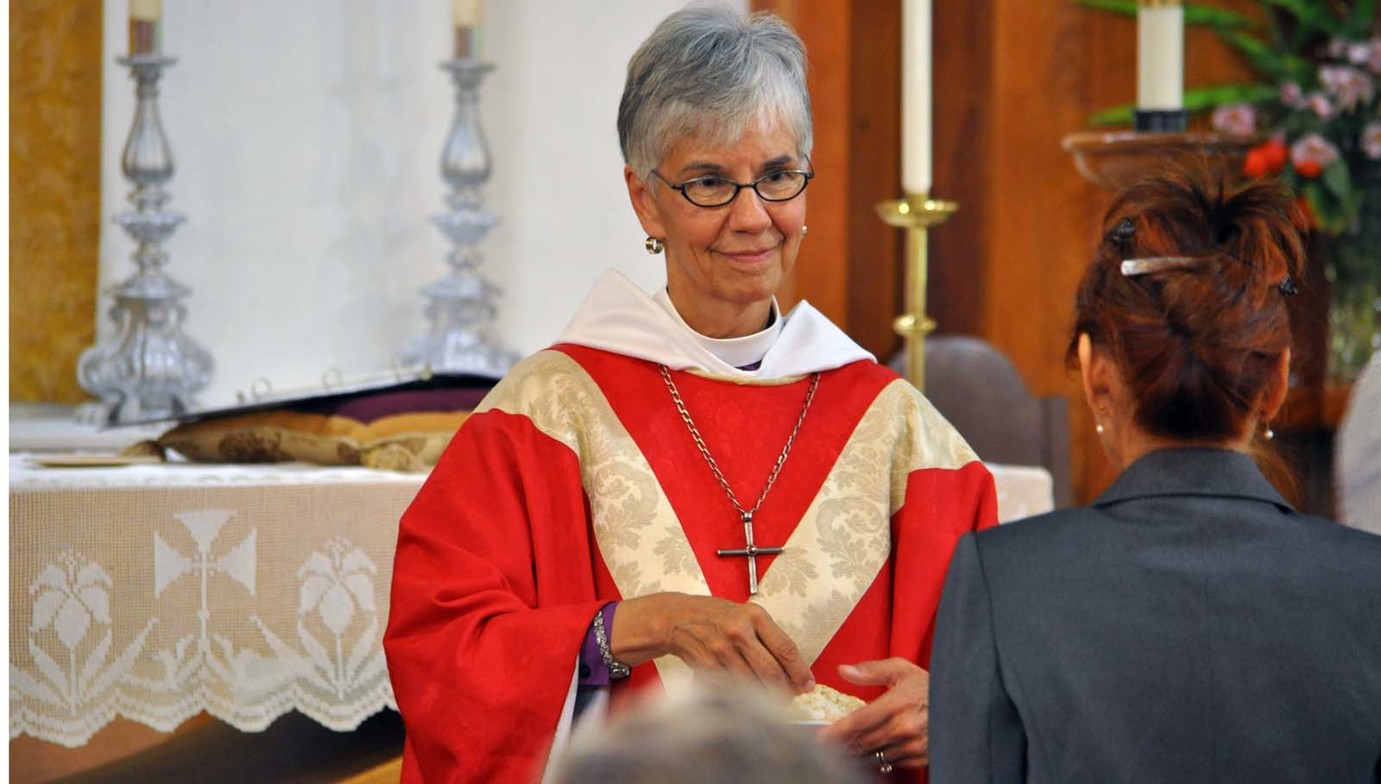 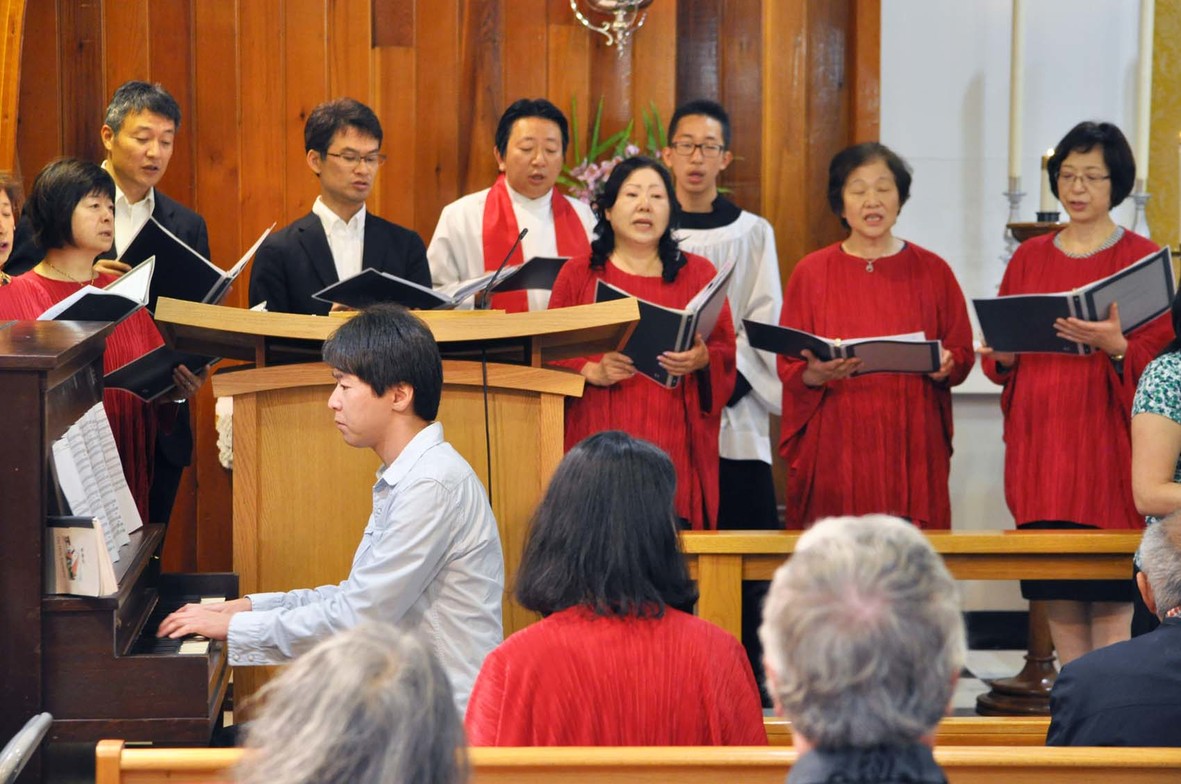 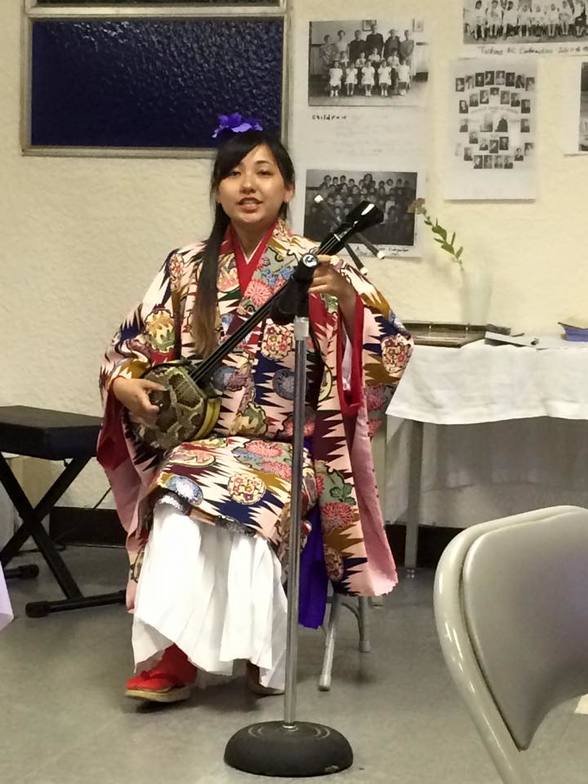 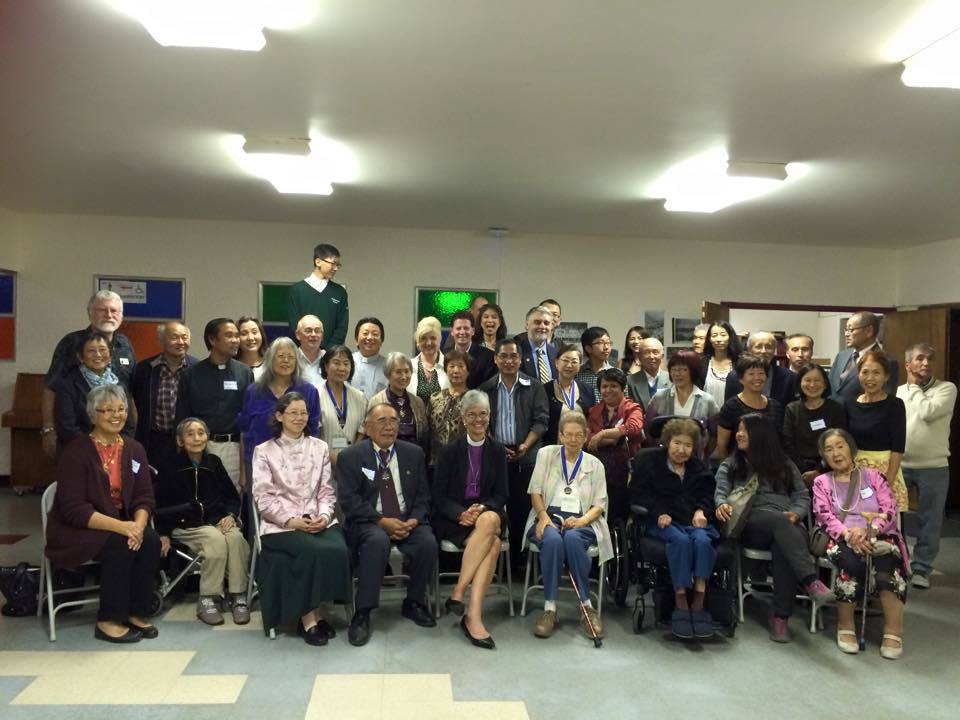 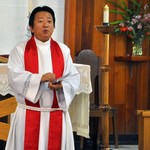 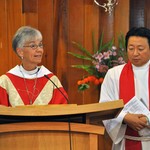 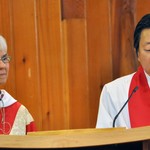 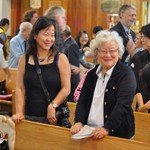 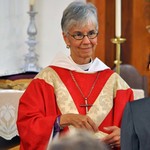 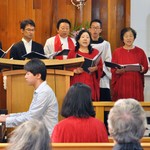 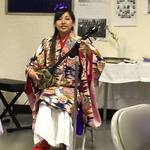 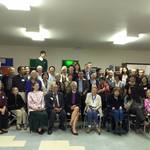 The Eve of the Feast of Holy Cross at Holy Cross Japanese-Canadian Anglican Church.

Preparing folks for a bi-lingual Eucharist when one’s first language is not one of the languages being used in the liturgy would be a daunting task for many, but not for the Reverend Father Daebin Im, rector of Holy Cross Japanese – Canadian Anglican Church in East Vancouver. At 4:50pm on September 13, 2015, Father Im stood in the aisle that separates the nave portion from the chancel portion of the sanctuary and with cheerfulness and skill briefed the standing room only congregation on how to use the bi-lingual (Japanese and English) booklet containing the text of the Eucharist and how to use it in conjunction with the bi-lingual Order of Service bulletin printed for that day, Holy Cross Day, the patronal festival of the parish. His explanation was clear and concise and obviously worked well as the congregation was engaged and participated enthusiastically in worship.

The preacher and celebrant at the Eucharist was the Right Reverend Melissa Skelton, 9th Bishop of the Diocese of New Westminster and her chaplain was the Reverend Katherine Yeo, who was delighted to be deacon at the Eucharist and to represent as a member of Vancouver’s Chinese-Canadian Christian community. This special Celebration of the Eucharist was not just an observance of the parish’s patronal festival it was also to honour two anniversaries. The first anniversary was to mark the 70 years since the end of the War in the Pacific (World War II) in 1945, and the second was the 100th anniversary of the establishment of intentional Asian ministry in British Columbia with the Provincial Board of Missions to the Orientals (PBMO).  A somewhat anachronistic and arcane title, however we must remember it was founded 1915, but this was a sincere ministerial enterprise that went on to do much good work, including the support of Japanese and Chinese Canadians during the internment camps and helped to re-establish a Japanese-Canadian Anglican Church in British Columbia.

Following Father Im’s instructional prelude, the service began with the procession and the singing of Praise the Lord, a simple but beautiful Japanese traditional melody (SAKURA) with text written in 1980 by Nobuaki Hanaoka. Members of the community read the Old Testament in English and the Epistle in Japanese and then the Gospel, John 3:13-17 was read by the deacon, the Reverend Katherine Yeo.

Bishop Skelton was accompanied by Fr. Im as she approached the pulpit area to offer her homily. She began by saying that it was an “honour” to be present on the parish’s “naming day”, and to mark the two anniversaries. She commented that there “is much to celebrate and much to lament”. Bishop Skelton made reference to the first anniversary being marked that day and the bitter memories caused by the exile in 1942, a direct result of racism and injustices that paved the way for the loss of churches and funds in 1945 and 1949. Bishop Skelton also remarked that Holy Cross Japanese-Canadian Anglican Church is probably the longest name of any parish in the diocese which produced a few chuckles. She followed up this observation by saying “and you deserve it”.

Following the creed and the intercession there was a lengthy and joyful exchange of the Peace and then Bishop Skelton celebrated the Eucharist with those in attendance, the Body of Christ at Holy Cross, all participating in the corporate prayers of the Eucharist in their preferred language. During the administration of communion the Choir of Holy Cross sang an arrangement of Amazing Grace.

After worship there was a potluck meal in the hall, some more choral singing and a recital of traditional Japanese music. To commemorate the parish celebration, everyone present posed for a photograph, gathering together around Bishop Skelton.