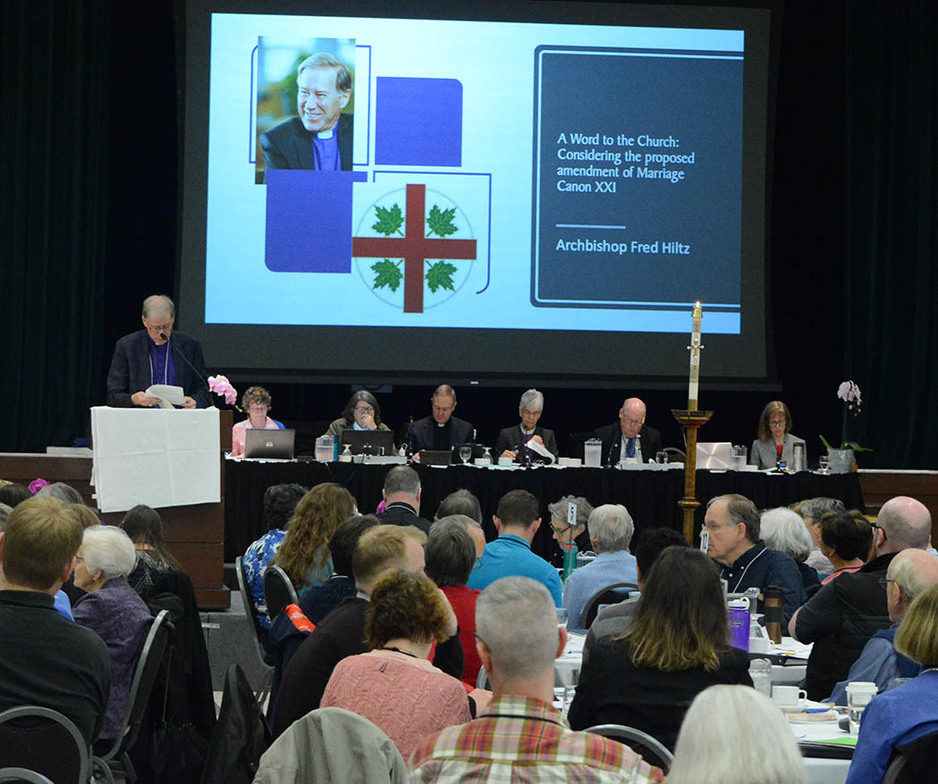 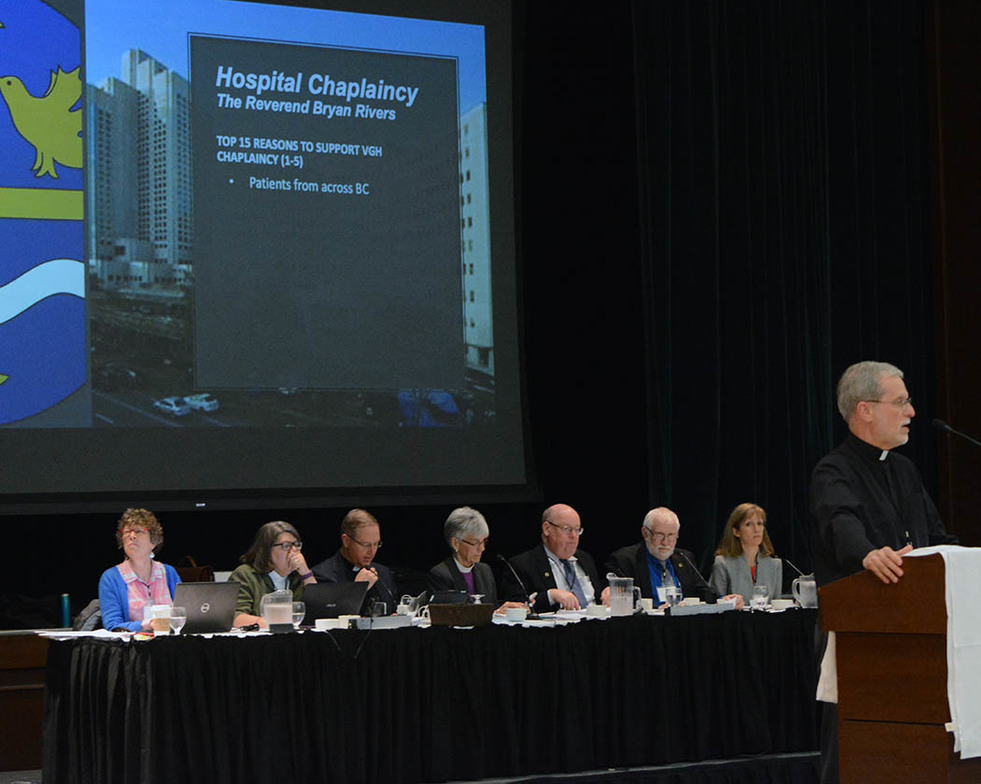 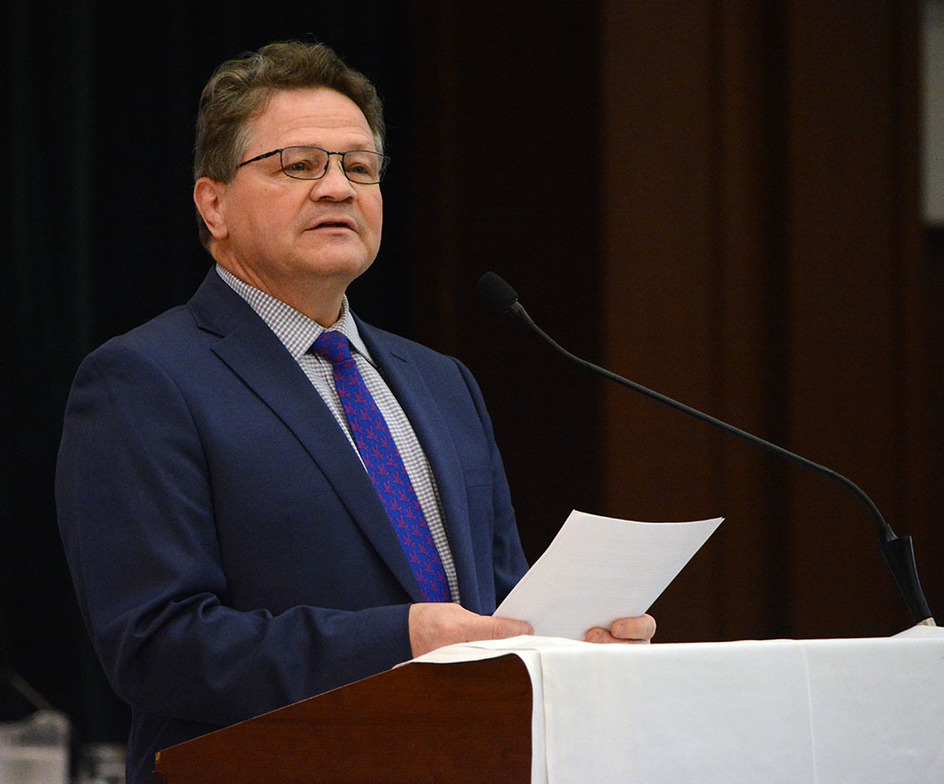 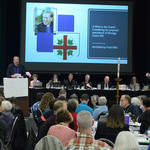 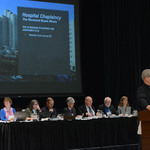 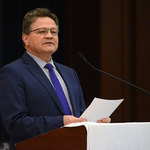 Time With the Primate: Looking at "A Word to the Church"

Archbishop Fred Hiltz, Primate of the Anglican Church of Canada, addressed those gathered at the Synod of the Diocese of New Westminster at 11:15am the morning of May 25, Day 2. He spoke with regard to the proposed amendment of Marriage Canon XXI. More specifically the Archbishop advised that he would review the document entitled “A Word to the Church”, a document passed by consensus by the Council of General Synod (COGS) on March 16, 2019.

The archbishop spoke to guide Synod toward COGS affirmation to walk together and to preserve communion, one with another, in Christ, within this church, within the Anglican Communion, and with the Church’s ecumenical partners.

Before his review of the “Word” document, a five-part affirmation, he referred back to the 2013 General Synod. At that meeting there was a resolution that directed COGS to draft a motion for consideration at General Synod 2016. This motion would change Canon XXI on Marriage to allow the marriage of same sex couples. The outcome of the 2013 motion was COGS appointment of the Commission on the Marriage Canon. The Commission was to undertake the work requested in the resolution.

He said that in 2018, COGS gave some thought to “a great yearning” to recapture something of the spirit of the process that took place at the 2010 General Synod, when there was an attempt at “intentional conversation” with one another; a conversation that resulted in a “Pastoral Statement”.

Atits January 2019 meeting, COGS decided to offer to the Church a sense of where this conversation on Marriage Canon XXI has been, to enable the Church to acknowledge the realities that exist in the midst of all our diversity, to state that we stand together, and to make certain affirmations. COGS resolved across differences to work together, to listen, to learn, and to attempt to understand the deep-seated understandings of the scriptures.

The archbishop stated that since 2013, the church has learned that it is inappropriate to assume that all Indigenous people are of the same mind regarding the issue of allowing the marriage of same sex couples. He noted that there is diversity among Indigenous communities, just as there is within the church at large.

Before his address drew to a close, the archbishop remarked that there is a humility about “A Word to the Church”, a graciousness, a strength. That it ensures room for everybody in our church, and that it creates a “spaciousness”.

As he looks ahead to General Synod, Archbishop Hiltz advised that the plan is to make significant decisions within the first few days of the Synod.

After due consideration, General Synod will turn its attention to the question of an amendment to the Canon XXI. The Primate recognized that people are concerned that if “A Word To The Church” is passed, that upon second reading there is a change to Canon XXI.

The archbishop stressed that it will take some time to consider the outcome of General Synod, and he noted that each diocese would have further work to do.

Report of the Anglican Chaplain at Vancouver General Hospital (VGH)

The Reverend Bryan Rivers, Anglican Chaplain at VGH spoke with passion about the important work done by this ministry at VGH.

He then listed the “top 15 reasons” why the VGH, Chaplaincy should be supported:

Rev. Rivers advised that he was working his way up – along the lines of the famous Top 10 lists on the David Letterman talk show, "Late Night" – to No. 15, on the list of top reasons to support this ministry.

He continued by saying that the Chaplaincy acts as:

11. liaison between parishioners who are hospitalized, and their home church and home clergy;

12. provides the terminally ill with the last opportunity to hear the gospel;

13. has incredible opportunities for spontaneous ministry;

14. that the work is a visible, tangible and creditable witness of the Diocese working in the        community; and...

15. is vital because anyone can be hospitalized at VGH at any moment.

Report of the Vancouver School of Theology

Richard Topping, Principal of Vancouver School of Theology (VST) thanked Synod for the opportunity to speak about VST. He started by saying that the school “is called to educate and form thoughtful, engaged and generous Christian leaders for the church and the world.”

The school, located on the grounds of the University of British Columbia (UBC), had recently unveiled its new logo, an image comprising stylized mountains and the sea.

In 2018, VST had received recognition as (i) one of the 10 most improved theological schools, and (ii) was ranked 39th in the world. He acknowledged that the calculus for these rankings was “mysterious” but that being thus recognized meant that VST was having an impact.

He drew attention to the faculty’s prolific research and publications. The scholarship of the professorial staff was demonstrated by a book launch event in November of 2018 involving six members of faculty and 11 launched books.

Dr. Topping listed the growing number of new partners helping VST accomplish its mission: the Sauder School of Business, Durham University in the UK, Huron College, located at Western University in London, Ontario, and St. Mark’s, the Roman Catholic Undergraduate College located on the campus of UBC. He added that VST has a history of 35 years with Indigenous studies.

He then spoke about the success of a balanced budget for four years running, while there was a growth in programs and the number of enrolled students.

One of VST’s sessional lecturers is Archbishop Melissa Skelton, and another is the Very Rev. Dr. Peter Elliott. In the academic year 2018-2019, VST enjoyed the largest number of applications and acceptances in its programs in 18 years and of these 29 were Anglicans. The United Church of Canada has a cohort of 49 students, while the Presbyterian students number 33.

In 2021, VST will celebrate its 50th anniversary. It is the school’s goal to enroll 50 students that year, drawing on students from North America, and from around the world.

In closing Dr. Topping expressed gratitude for the partnership, and support of, the Diocese of New Westminster.