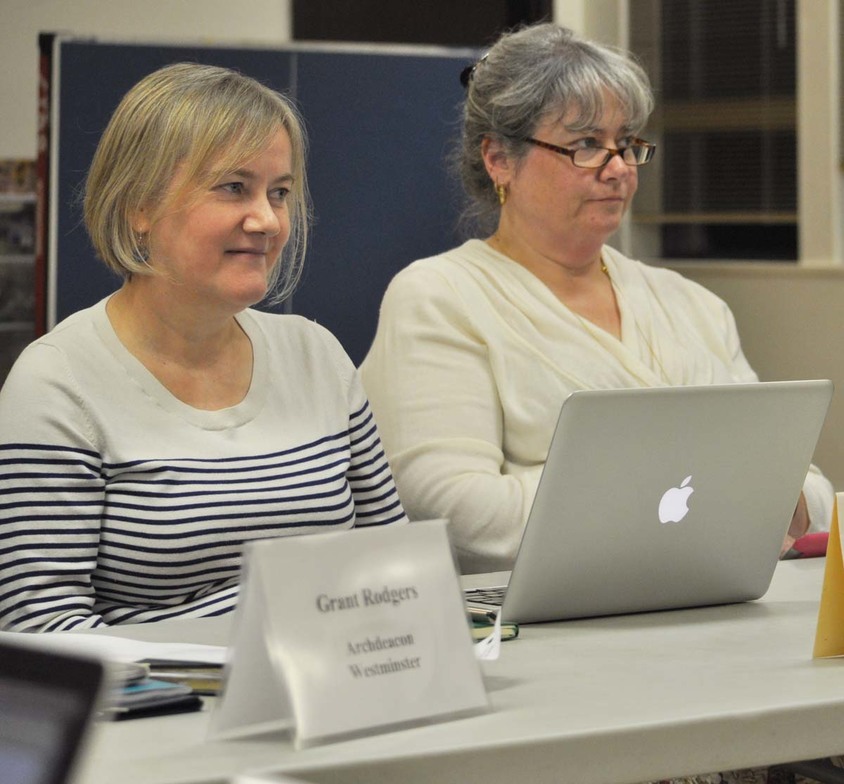 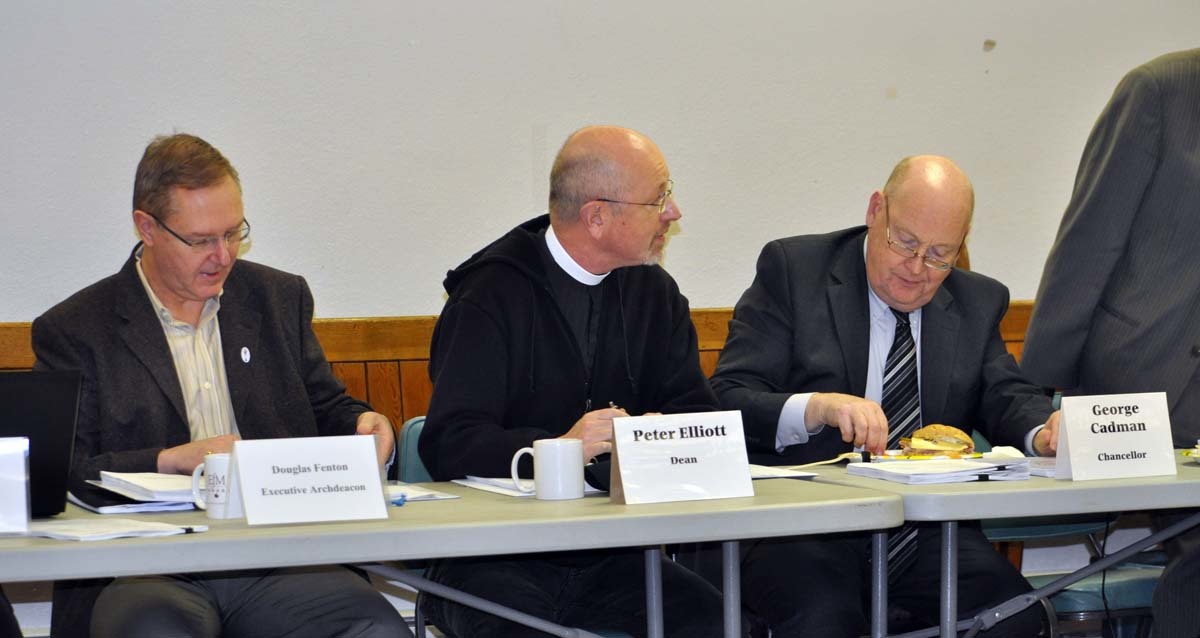 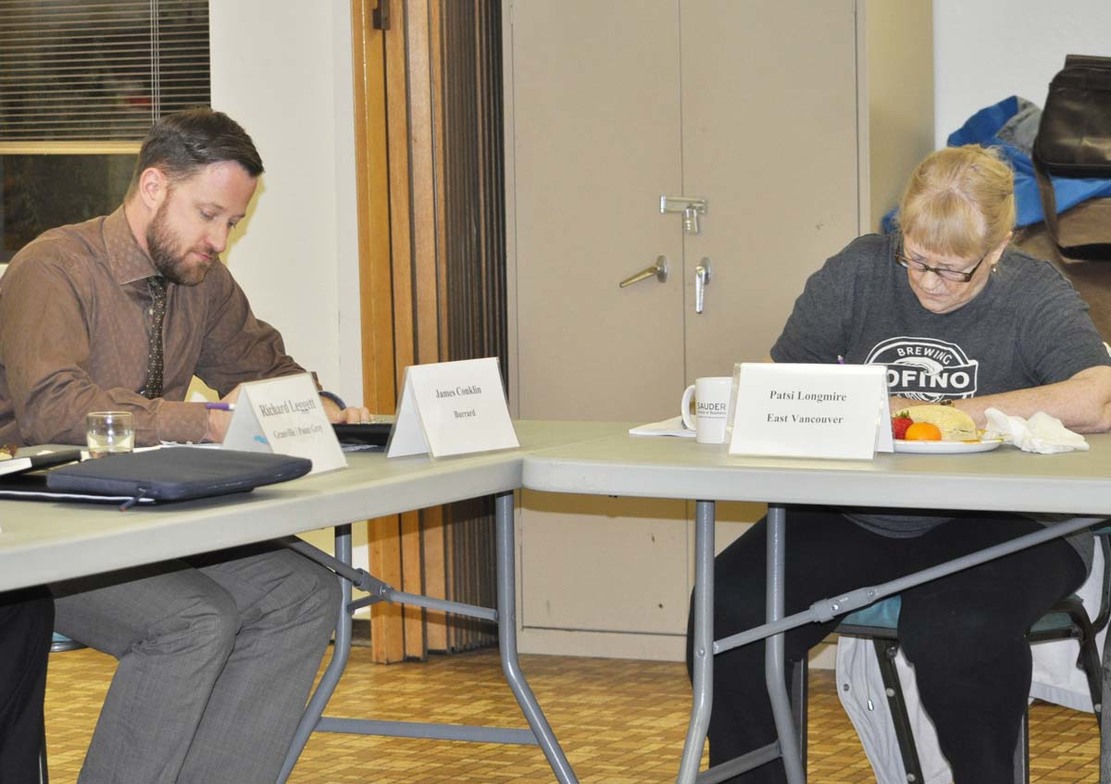 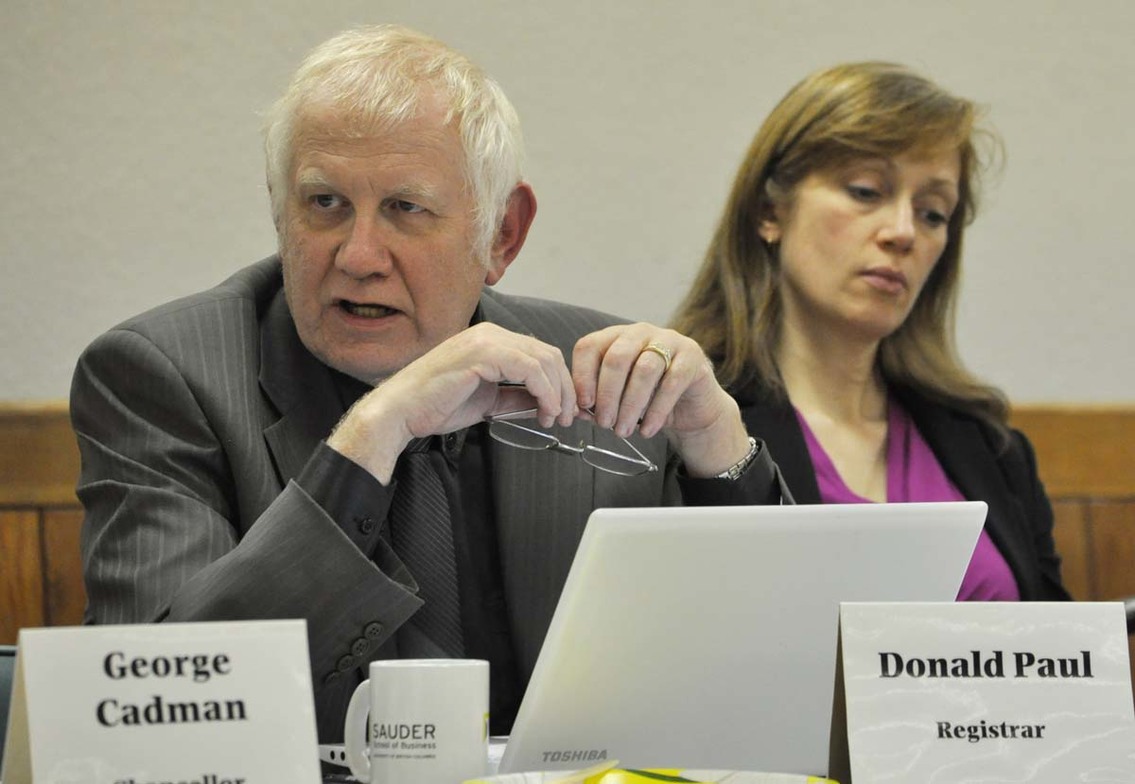 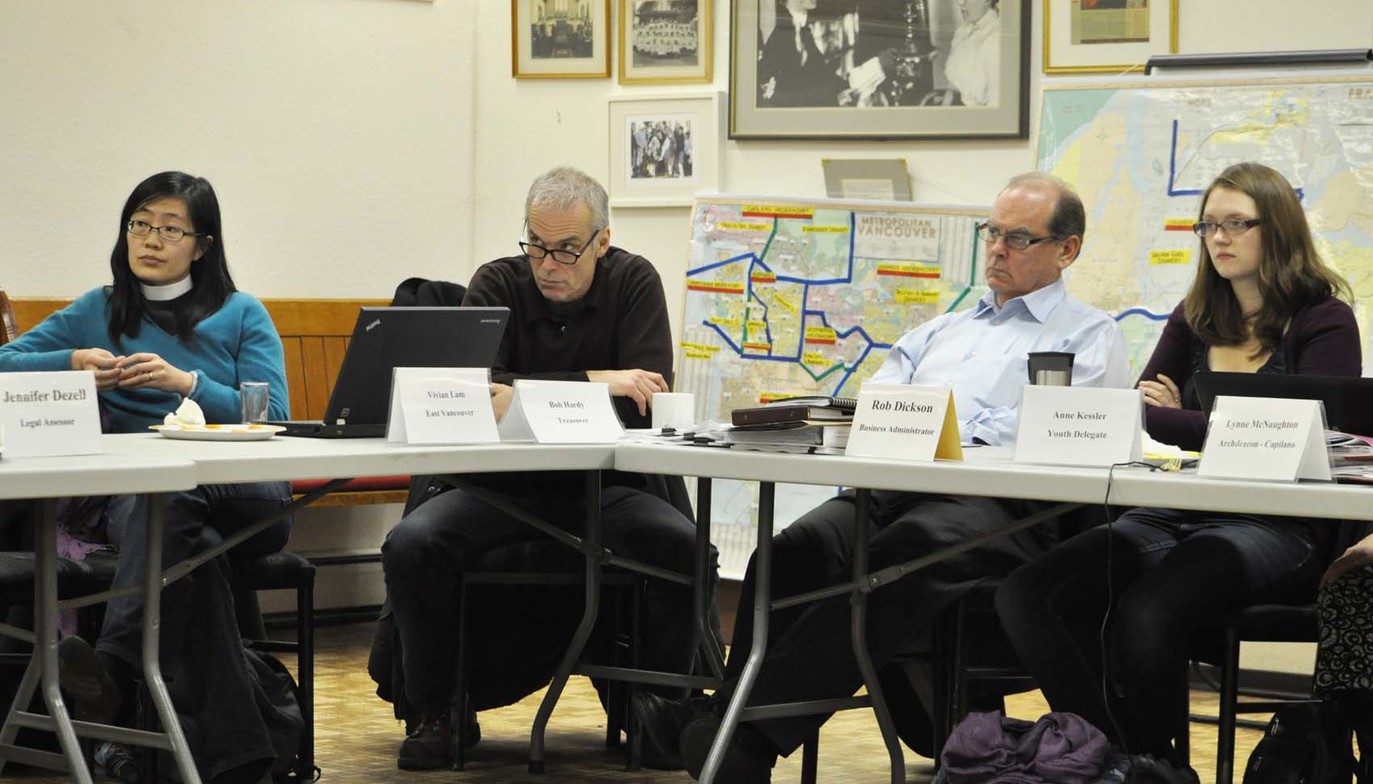 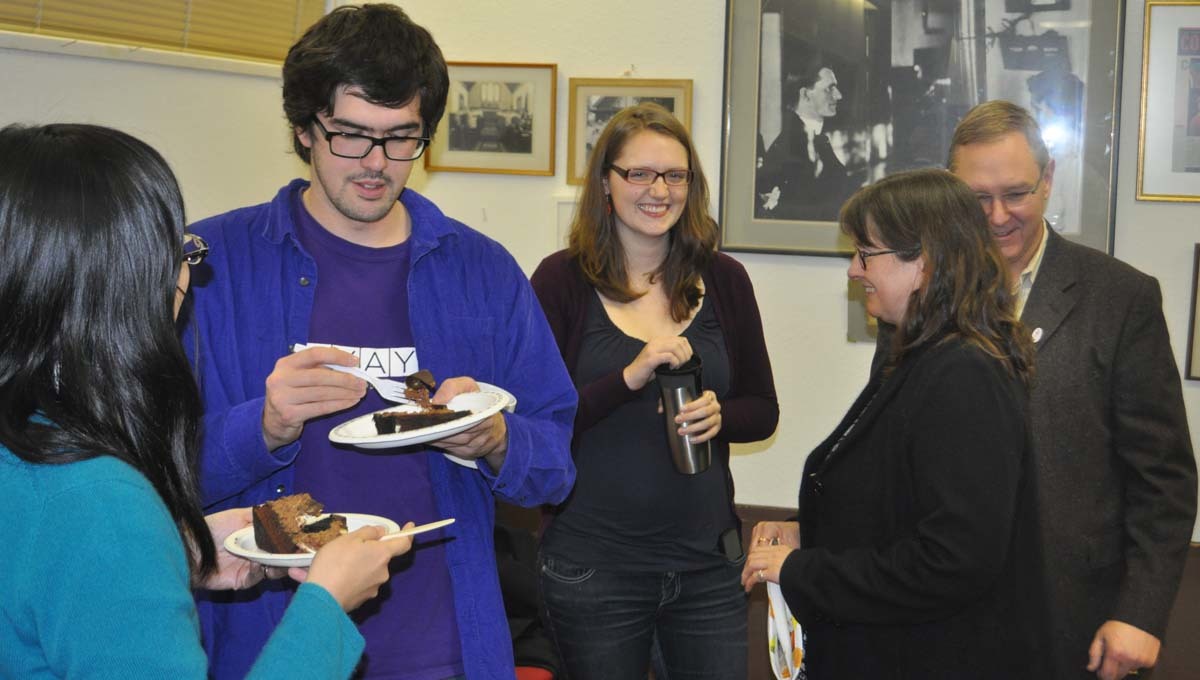 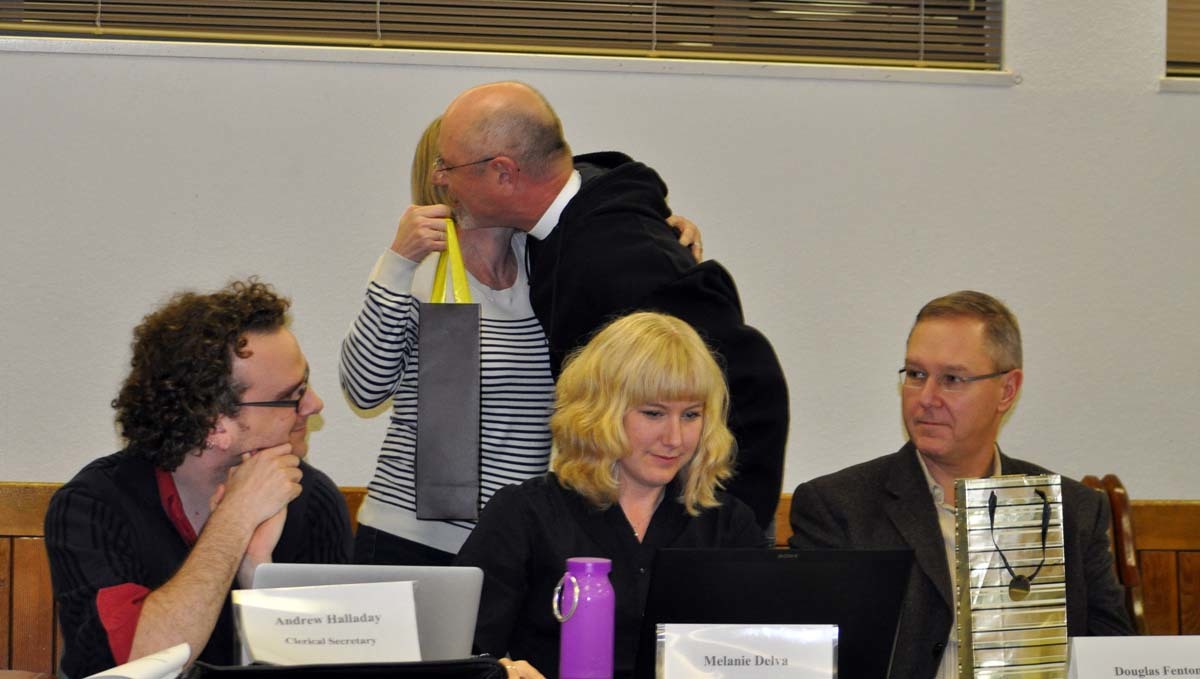 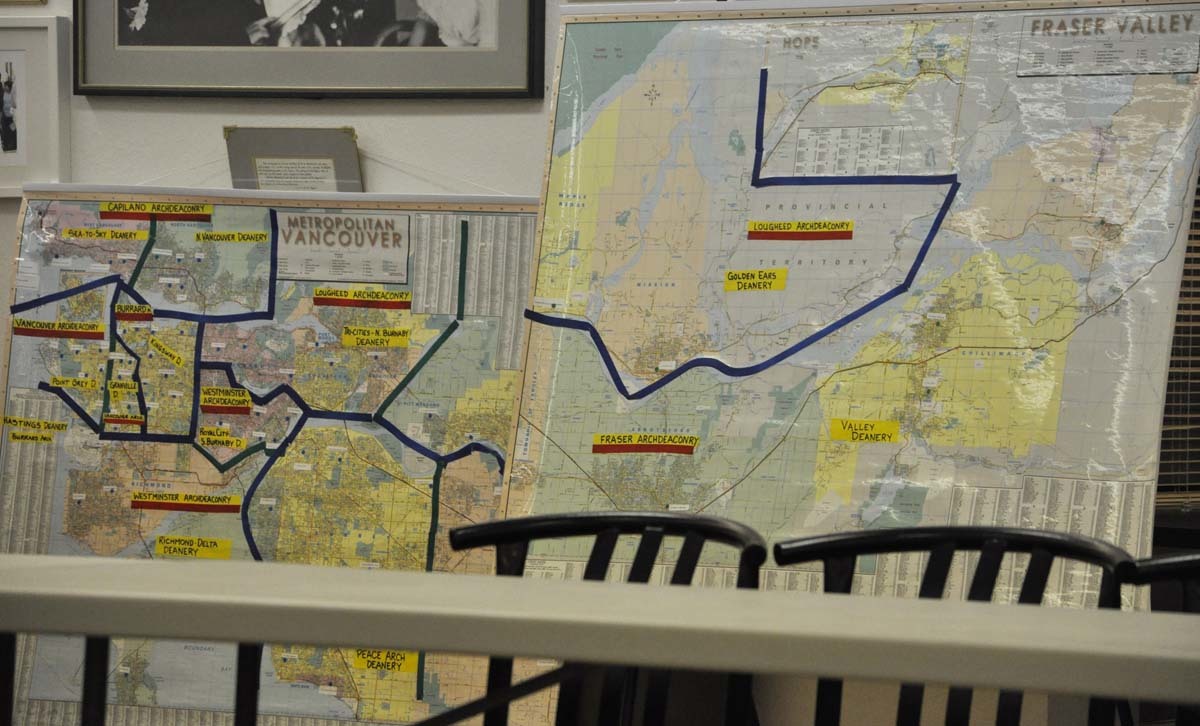 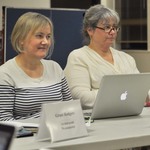 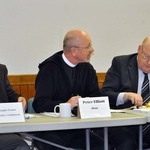 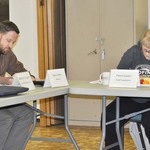 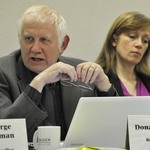 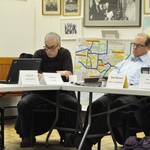 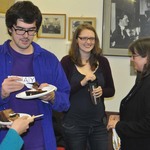 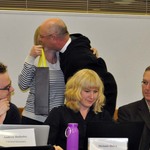 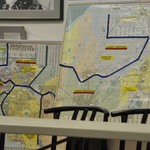 Dean Peter Elliott, chair for the evening, opened the meeting and spoke about how this Church Year has a longer than normal Season of Epiphany. There are more Sundays, as Easter is later in 2014. We are blessed because of the richness of the lectionary readings assigned for this Season; 1 Corinthians then ending with the Sermon on the Mount. It is fitting that our new Bishop will be installed just days before Ash Wednesday and will be with us as we move towards Easter. Dean Peter then thanked the Chancellor and the Executive Archdeacon for their leadership role at the meeting January 14th when he was absent due to the sudden illness of his brother-in-law, Sorrento Centre, Executive Director, Dr. Christopher Lind.

Dean Peter asked that Christopher and his family be remembered in prayers.


ITEMS FOR DISCUSSION AND INFORMATION


The Dean moved to Agenda Item 8 which included information correcting the previously issued Order of the Diocese of New Westminster (ODNW) nominations deadline. Deadline for nominations is April 30th, 2014. He also referred Council to two important dates this June. June 22nd will be the day for Confirmations, Re-Affirmations and Receptions and Ordinations will be celebrated on June 29th with both liturgies at Christ Church Cathedral at 4pm.


PRESENTATION
Consecration of the Bishop


Dean Peter began by bringing Council up to speed on the preparations for the March 1st, 2014, Consecration and Installation of the Reverend Canon Melissa Skelton as the 9th Bishop of the Diocese of New Westminster, one service in two parts. Most of the information is already well-known regarding venues and start times, and also that the consecrating Bishop will be the Metropolitan of the Ecclesiastical Province of BC and Yukon, Archbishop John Privett and the presider at the Eucharist will be the Primate of the Anglican Church of Canada, Archbishop Fred Hiltz. More recent information is that the Bishop of the Episcopal Diocese of Olympia, the Rt. Rev. Greg Rickel will preach at the Ordination Eucharist and that the City of Vancouver has approved the permit for the procession south on Burrard Street led by Kwhlii Gibaygum Nisga'a Traditional Dancers. All participants in the procession will be marshaled in the plaza area in front of the VCC East Hall then proceed west on Canada Place then left into the southbound lane of Burrard Street, then right at Dunsmuir and on to the east side sidewalk and from there a straight shot to the Cathedral. Dr. Richard Leggett highlighted some of the capacity and mobility issues.

The capacity for the Ordination Eucharist at VCC will be approximately 1800 and if we do achieve capacity attendance at that locale then only a percentage of those will fit in the sanctuary of CCC, perhaps a total of 900. There will be overflow facilities available; however, those arrangements are still being clearly defined. There will not be facilities for transporting people from the VCC to CCC. There will be limited preferred seating in place for those in wheelchairs etc. at both venues.

There are no tickets, ALL ARE WELCOME.

Chancellor George Cadman spoke to the one plus page report linked. There was a sense within the Committee that to do due diligence and to work toward the best possible roster of candidates would require more time and an earlier start. It was suggested that the time allotted from the vacancy of the See to the Electoral Synod be extended from 90 to perhaps 120 days.


The Chancellor also spoke to the constitution of the Committee and the concern that it lacked diversity in membership and whether or not the Committee truly represented the current composition of the Synod delegate body.

One of the main areas of concern was based around the issues of communications, access to the nominees and a workable process to enable them to share their views in an easily accessible forum. The development of a centralized social networking site perhaps supervised and administrated by the Synod Office, giving everyone involved a level playing field, may be an answer to the questions about nominee accessibility.


There was also some discussion about limitation on the number of candidates. According to the Chancellor, the debate among the Committee members was quite robust on this topic.

Dean Elliott suggested that Council move to receive this report and refer it to Canons and Constitutions Committee for more discussion and development.


The Motion was CARRIED

MINUTES
The Minutes of the January 14th, 2014 , meeting were approved as circulated

Boundaries Task Force Chair, the Venerable Lynne McNaughton, pointed out the minor changes to the February version of the Report that has been before Council several times since the fall of 2013. This new information and a recap of the proposed deanery and archdeaconry configurations were heard by Council without debate.

Dean Elliott called the question for Council to accept this report and begin implementation of the new boundaries by Synod 2014, May 23rd and May 24th.

Chair of MCDC, Dr. Starr Allaby spoke to the Precis of the two page report, putting forward the suggestion that the Ministry Assessment Process (MAP) introduced at Synod in 2007, be drawn to a close as a Synodical requirement . Dr Allaby moved the three Resolutions found at the bottom of Page 2.


Prior to the vote, a number of Council members spoke about MAP and their own experiences and then there were questions about “What will be next?” A number of Council members contributed thoughts with the prevailing message being that MAP is still on the table, it is there to be used, but perhaps wrapping up MAP as a Synodical requirement may not be a good idea. There are still parishes that may benefit from MAP. Acting Director for Mission and Ministry Development the Reverend Ruth Monette spoke to these questions, saying that there are congregational development resources available as well as MAP and parishes are encouraged to use them.

Dr. Allaby also spoke to the natural resistance that mandatory programming can bring about in people who would rather have more flexibility of choice regarding their involvement.


A number of Council members were enthusiastic in their support of Synod Staff MAP Associates, Ms. Tasha Carrothers and the Reverend Marnie Peterson. Their dedication, abilities and pastoral concern were much appreciated by all who experienced MAP under their expert facilitation.

The Resolutions were CARRIED

The Venerable Douglas Fenton supplied some background about the request to the Anglican Foundation to help fund this program. The Diocese of New Westminster is the only diocese in the Anglican Church of Canada that has qualified trainers for this training. Our diocese is seen as taking leadership in Anti-Racism training throughout the National Church and this would be something that the D of NW could offer the National Church .

Registrar, Don Paul suggested that the wording “and willing” be added to the proposed motion.

The Motion was CARRIED with the word change.

As of the preparation of this attached 38 page document there were still three conditions to be met. Registrar Don Paul made Council aware of the fact that MCDC had as of their last meeting in fact fulfilled their requirement by giving approval. Which left only Diocesan Council approval and a letter of approval to be written by the Diocesan Administrator.


The special regulation that was crafted by Don enabled the former members of St. Margaret of Scotland to officially merge with St. John, Port Moody on February 14th, 2014 to be considered full members of St. John’s even though they did not meet the canonical requirement of being on the Parish Rolls for a minimum of 90 days.

Again it was up to the Diocesan Registrar to speak to this item. Don began by saying that unfortunately the Parish of St. David of Wales has come to the end of its time. The leadership is exhausted and does not have enough energy to continue, they have reached the correct decision for them at this time.
The last service will be February 23rd, 2014 at 10am

The Dean and Rector of Christ Church Cathedral, the Very Reverend Peter Elliott’s tenure as Administrator of the Diocese is heading into the last few weeks and in honour of the extraordinary servant-ministry he has provided since September 1st, 2013, Diocesan Council celebrated with a cake. The cake was not just in recognition of Dean Elliott’s work but also all the work done by Chancellor, George Cadman particularly around his leadership in the Episcopal Election process and in recognition of the extraordinary work done by Senior Staff personnel during this time that the See has been vacant, Executive Archdeacon, Douglas Fenton and Business Administrator, Rob Dickson. The cake was served during the coffee break and the service of these four diocesan leaders was recognized with enthusiastic applause, a card for each signed by every member of Council present that evening and a gift. The Regional Archdeacons and the Archdeacon of Deacons were the moving forces behind the gifts, cards and the delicious chocolate mousse cake with the Venerable Dr. Ellen Clark-King Archdeacon of Burrard handling the role of Presenter.


Following the break at 8:32 –Council Moved In Camera and Ex Camera at 9:17pm
After the In Camera business was concluded Dean Peter Elliott adjourned the meeting.

The next meeting of Diocesan Council will take place at St. Augustine’s, Marpole, Tuesday, March the 11th beginning with dinner at 6pm with the new Bishop of the Diocese who will also chair her first meeting.

Images:
• Top and homepage, the Venerable Dr. Ellen Clark-King and Belinda Kishimoto
• Dean Peter Elliott between the Executive Archdeacon of the Diocese, the Venerable Douglas Fenton on the left and the Chancellor of the Diocese, George Cadman Q.C. on the right.
• Burrard Deanery Rep, James Conklin and East Vancouver Deanery Rep. Patsy Longmire prepare for the meeting while enjoying their dinners
• The New Boundaries
• Diocesan Registrar Don Paul contributed a great deal of excellent material to this meeting of Council. Legal Assessor Jennifer Dezell is on the left.
• East Vancouver Deanery Rep, the Reverend Vivian Lam; Treasurer of the Diocese, Bob Hardy; Business Administrator of the Diocese, Rob Dickson and Youth Delegate Anne Kessler listen carefully to Registrar Don Paul as he focuses on some of the finer points of the St Margaret’s/St. John’s merger
• Dean Peter and Archdeacon Ellen embrace as she presents him with a gift of something to drink and some theatre tickets in recognition of his time as Administrator of the Diocese.
• Some cake is enjoyed

There are two Deanery reps either Ordained or Lay. Sometimes Deaneries have two lay reps and sometimes two clergy reps, sometimes one of each. A Deanery is a group of churches, geographically affiliated and the reps are elected at the Annual Synod Meeting.

Synod Staff also attend meetings but are not members of Diocesan Council. They include: Business Administrator, Stewardship and Planned Giving Officer, Comptroller, Youth Coordinator and Communications Officer (and other staff as required).

Diocesan Synod consists of all the active clergy in the Diocese of New Westminster and 2-6 lay people elected from each diocesan parish proportionate to the size of the parish community.

Diocesan Council functions as the Synod between Synods, it is a representation of the large group that meets annually.

Diocesan Council and Diocesan Synod are both chaired by the Bishop.