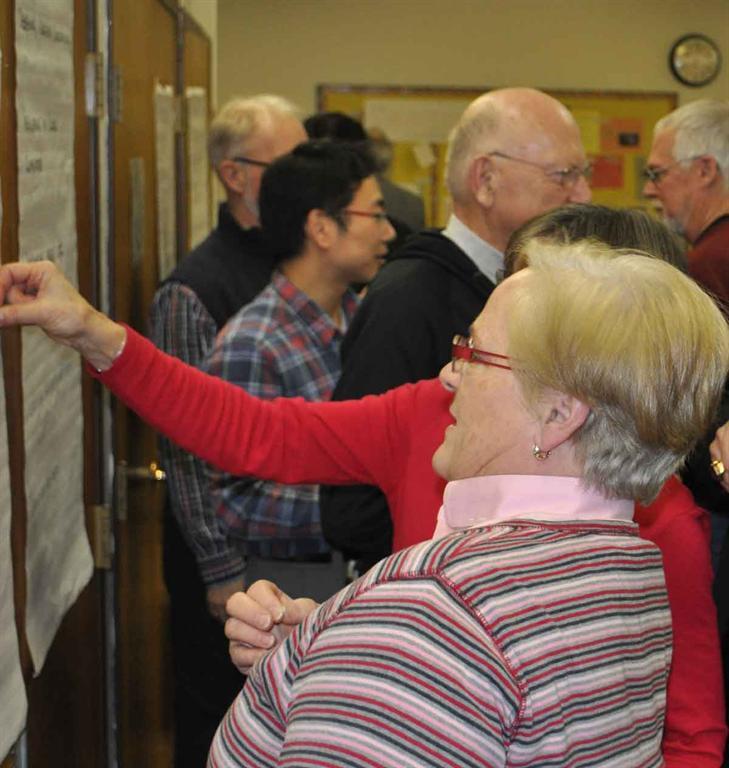 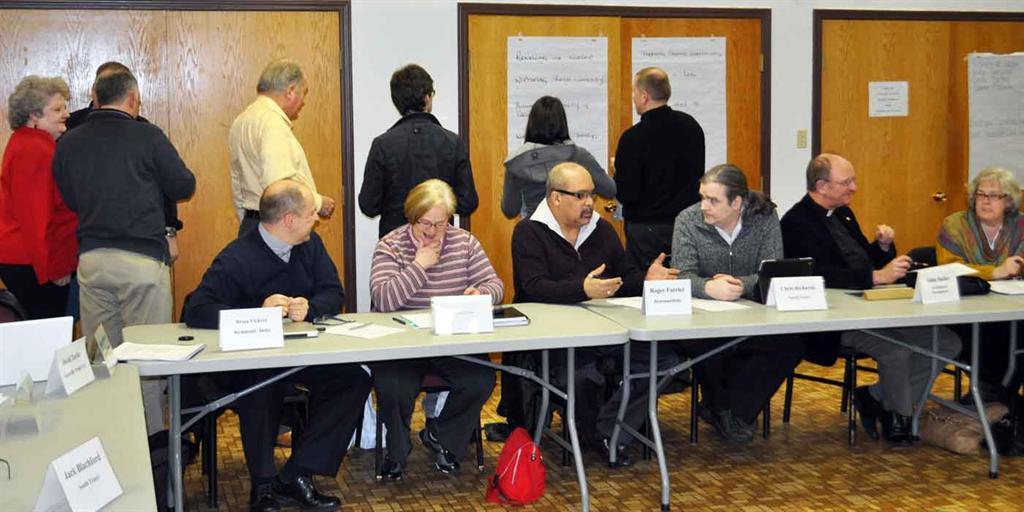 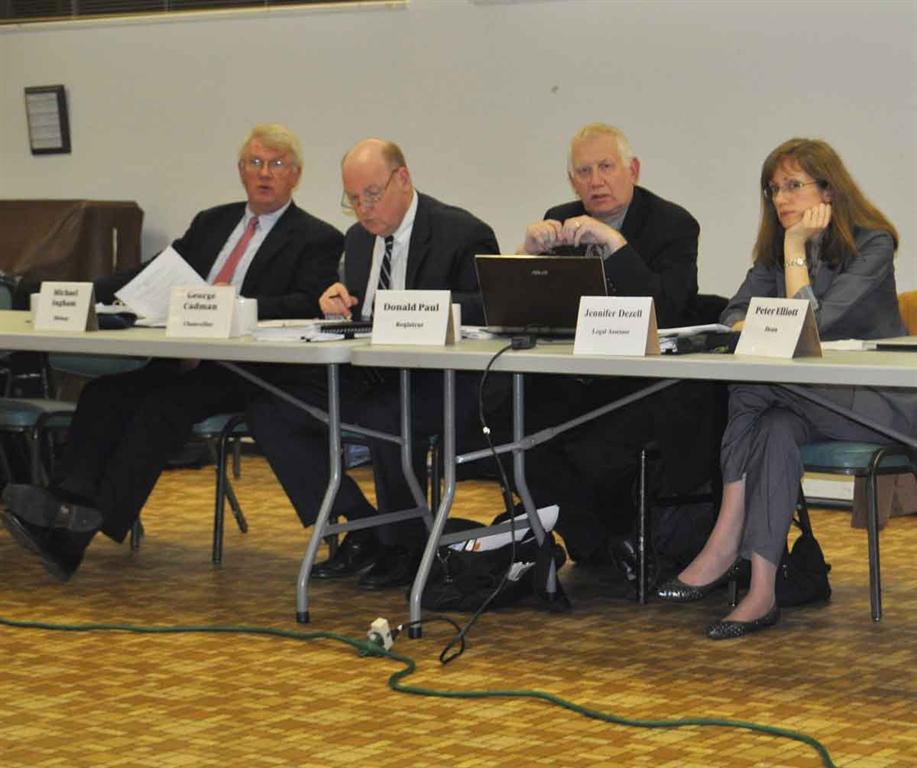 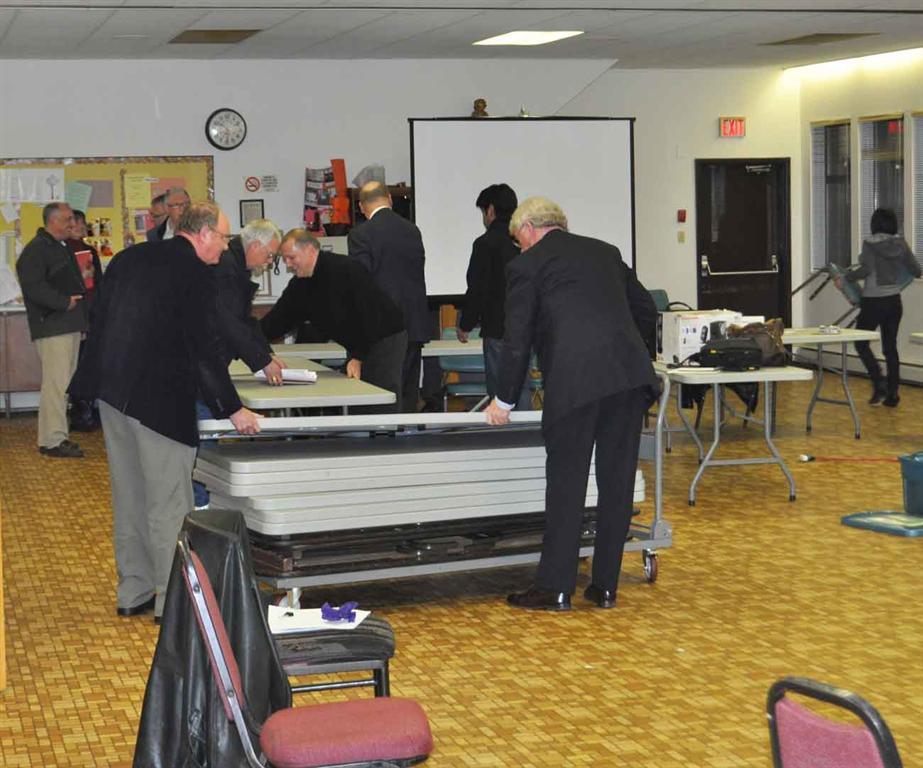 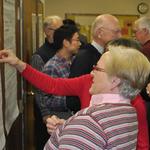 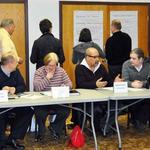 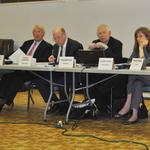 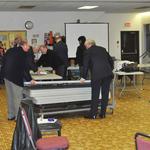 AGENDA
1. Opening - Welcome
Bishop Michael welcomed council to the first meeting of 2012 and welcomed back Archdeacon Ronald Harrison who is recovering from the major surgery that he underwent on January 3rd.
Because the January meeting was cancelled, this was the first meeting of 2012 and there were a few new faces in attendance: Rev. Clarence Li, Chair of the Ordained Ministry Division, Rev. Georgina Harris, new representative of the Westminster Deanery, Ms. Helen Brown, Chair of Ministry Resources Committee. The other new members, Dr. Star Allaby, Chair of Ministry and Congregational Development Committee and Mr. Tony Sauder, Chair of the Stewardship and Planned Giving Committee sent regrets.
Bishop Michael reported that there are many exciting things happening around the D of NW and updated DC on the growing Filipino congregation at St. Michael’s Broadway and the new life in that parish under the ordained ministry of their new three quarter-time Priest-in-Charge, Rev. Wilmer Toyoken. He spoke about the induction of the new Priest-in-Charge at Holy Cross, Rev. Fr. Daebin Im, February 8th and reflected on his visit to St. John’s, Shaughnessy on Sunday, February 12. This was the first time that Bishop Michael had been invited to preach and preside there for almost 20 years.
Bishop Michael went on to inform DC about various events taking place internationally, including the ongoing Dialogue of Canadian and African Bishops and the installation next month of a new Bishop in the Episcopal Diocese of Hong Kong.

3. Presentation
Plan 2018 Update
Chair of the Plan 2018 Implementation Group, the Rev. Andrew Wilhelm-Boyles announced that his time with council would consist of a brief check-in and update on the Strategic Plan implementation process.
The Implementation Group identified the integration of returning parishes, leadership training and a more effective diocesan structure as important facets of implementation. In fact there is a sub-committee of the Plan 2018 Implementation Group augmented with others preparing a “white paper” on diocesan restructuring that should be ready for first reading soon.
Andrew drew DC’s attention to the D of NW’s 10 Strategic Priorities (please click the link) in the context of the Anglican Communion’s Marks of Mission. He also made reference to the pre-Synod Day last May 7th and how parishes took that opportunity to show what they are accomplishing in ministry and where they are going.
However, he emphasized that the primary instrument remains the Parish Mission Review (PMR) with all but a few of the 73 parishes completing that process and of course, MAP the Ministry Assessment Process.
20 parishes have completed MAP which means that they now have a plan and are into the implementation phase. 33 are in MAP at various points in the process with 20 still to enter the process.
Andrew made reference to the Leadership School scheduled July 22-28, 2012. This school is an initiative of diocesan program staff under the leadership of Diocesan Director for Mission and Ministry, Rev. Douglas Fenton.
Andrew then organized a table exercise where small groups formed in proximity around the DC tables, and discuss the 10 Strategic Priorities. After 5 minutes each member of DC was given 3 sticky dots and asked to put their dots next to the Strategic Priorities they thought were most important.

Andrew then counted up the dots and formulated the results. The Parish Ministries segment of the priorities were deemed most important: Renewing our Worship, Building a Community of Parishes, Supporting Christian Education, Nurturing Parish Community were rated highly by DC members.

COGS Report
Bishop Michael introduced Archdeacon Lynne McNaughton, a provincial rep to Council of General Synod (COGS), Dean Peter Elliott, Chair of Planning and Agenda for COGS and Rob Dickson .
As members of DC it is important to have some understanding of what is happening at the National Church level.
Lynne gave a brief overview of COGS and COGS representation from the Ecclesiastical Province of BC and the Yukon before beginning her report about the meetings held last November 18-20 There is a new General Secretary of General Synod, Michael Thompson, a position described by Peter Elliott as the “COO of the Corporation.”
Dean Peter Elliott was the preacher for the opening worship of this COGS session.
It was Archbishop Fred Hiltz who decided that the opening worship would be held at a smaller parish church as opposed to a large urban church like the Cathedral or St. Paul’s Bloor Street.
Rob Dickson in his National Church role as Chair of the Financial Management Committee of the General Synod of the Anglican Church of Canada presented two significant financial items:
• Resources for Mission, the fundraising and revenue generating arm of General Synod presented a motion to COGS to promote Together in Mission a financial campaign of the National Church in partnership with the dioceses of the Church across Canada to ultimately raise $25,000,000 for General Synod.
• Budget: The management team had honoured the desire of COGS in 2008 to remove the deficit budget by 2012. That was achieved by 2011.
In 2008 the late Mike Wellwood was Vice-Chair of the national church’s financial management team and his planning played a significant role in the success of eliminating budget deficits.
If current revenue projections for 2012 and 2013 remain accurate, budgets should come in on target.
Rob went on to stress the importance of proportional giving by dioceses to General Synod.
Lynne reported that the Truth and Reconciliation Commission (click the link) was discussed and also the Mississauga Declaration. This declaration captures the urgency behind Indigenous governance work and illustrates how although new structures are gradually emerging, First Nation’s Anglicans have not yet truly found a place in the National Church. Lynne reported that there was much sadness. To access a copy please click the link. Click to access the article on the ACC website. From this link you may access a film about the Mississauga Declaration and other related material
Also discussed at COGS were the Solemnization of Marriage by the Faith, Worship and Ministry Committee of which Lynne is a member. The question, What would happen if the Anglican Church no longer performed Solemnization of Marriage ? was asked and discussed.
Anglican Covenant and Vision 2019 Priorities also played a major role in the meetings.
Lynne finished her report by showing the 2010 National Church film promoting Vision 2019, CATCH THE BUZZ.

4. Minutes of December 13th, 2012
The Minutes were approved. Motion CARRIED

5. Correspondance
Two Letters for Information
Letter of January 6, 2012 from the Most Rev. Fred Hiltz
Bishop Michael commented that receiving a thank-you letter for our apportionment from the Primate was unprecedented.

6.1 Diocesan Financial Campaign – Funding Request
Rev. Michael McGee the Chair of Grants & Loans, a Standing Committee of the D of NW gave some background on how he came to be spokesperson for the funding request for the proposed Diocesan Financial Campaign feasibility study and Chair of a three person panel charged with sourcing consultants for the feasibility study. Michael gave a brief description of the fundraising companies who had applied for the contract to conduct the study.
The panel consisting of: the aforementioned Rev. Michael McGee, Diocesan Director of Planned Giving, Glen Mitchell and Christ Church Cathedral’s Development Director, Mark Munn chose Compton Fundraising Consultants. Compton has a very good international and local track record. In their projects over the years they’ve achieved a balance, working not only with churches, but with community groups and arts organizations.
Compton is a consulting firm that will forthright in their analysis. Compton is currently assembling a plan to interview diocesan leaders, stakeholders, donors, and staff, as well as planning to implement an e-survey that parishes will be able to access on line.
The funding is coming from the Margaret Lewis bequest subject to approval from DC.
The Motion to grant the funding was CARRIED

6.2 St. Michael, Surrey – Funding for land transfer
Diocesan Registrar, Don Paul verbally illustrated the layout of the property in question and how the land swap arrangement with the developer outlined will be advantageous to the parish. This swap will ensure that the developer will arrange for improvements on the land: streets, lighting, sewers. The land that the church receives in the swap will be improved as well but the parish will be responsible for a share of the cost.
The parish does not have the money for its share of development, however, if it is funded by the diocese it will become an equity for the diocese. Depending on how the parish develops in the future will impact the amount of the equity.
The resolution was moved by Don Paul and then the Bishop opened the floor for debate.
Treasurer Ian Robertson spoke to the resolution and told DC that this has been a very long and complicated process involving 12 legal entities
The Motion was CARRIED.

6.3 Christ Church Hope – Grant Request
Diocesan Business Administrator, Rob Dickson spoke to this Grant request for a ministry grant of $9, 500 in order to continue ordained ministry and regular worship. Rev. Michael McGee read a letter of endorsement from Archdeacon of Fraser, the Ven. Stephen Rowe.
In his letter he outlined the participation of Christ Church, Hope in its role as a heritage site in a town of 8,000. With very limited resources the Christ Church community led by their Priest-in-Charge Gail Newell has made a remarkable contributions to the community of Hope and the ministry of the church.
The Motion was CARRIED

6.6 St. Matthew’s Abbotsford - New Parish Organization
AND
6.7 St Matthias and St. Luke
Chancellor George Cadman spoke about the need to help these parishes with the re-establishment of the legal control of the parish. In order to move forward with this in both cases these are short regulations P-15 and P-16 but lengthy provisions that you are welcome to access by clicking on the links.
St. Matthias and St. Luke were in the process of amalgamating prior to the Synod walk-out of 2002 but they did not actually amalgamate so there are added complications regarding their governance.
St. Matthew’s current organization is built on the premise of a Mission Council that looks like a Church Committee but consists of Bishop’s wardens who are appointed. Every member of the council must be a voting a member of the parish.
There are two requirements:
1. You are an accustomed worshipper of the parish.
2. You have dedicated gifts of time, talent and finances. If you cease to meet these requirements you cease to be voting members.
These regulations were developed partly because the two parishes in questions do not currently have Canonical Committees. They do not have them because they have not had Anglican Church of Canada Priests since 2008. A Canonical Committee also functions as a Credentials Committee around such issues as Parish Membership for voting at Vestry.
The Motion was CARRIED

8. Items for Discussion/Information
8.1 Monthly Financial Statements – November 2011
As the meeting was about to enter hour three, Bishop Michael moved on to the next Agenda item.

10. Adjournment
The February, 2012 meeting of Diocesan Council was adjourned at 10:25pm