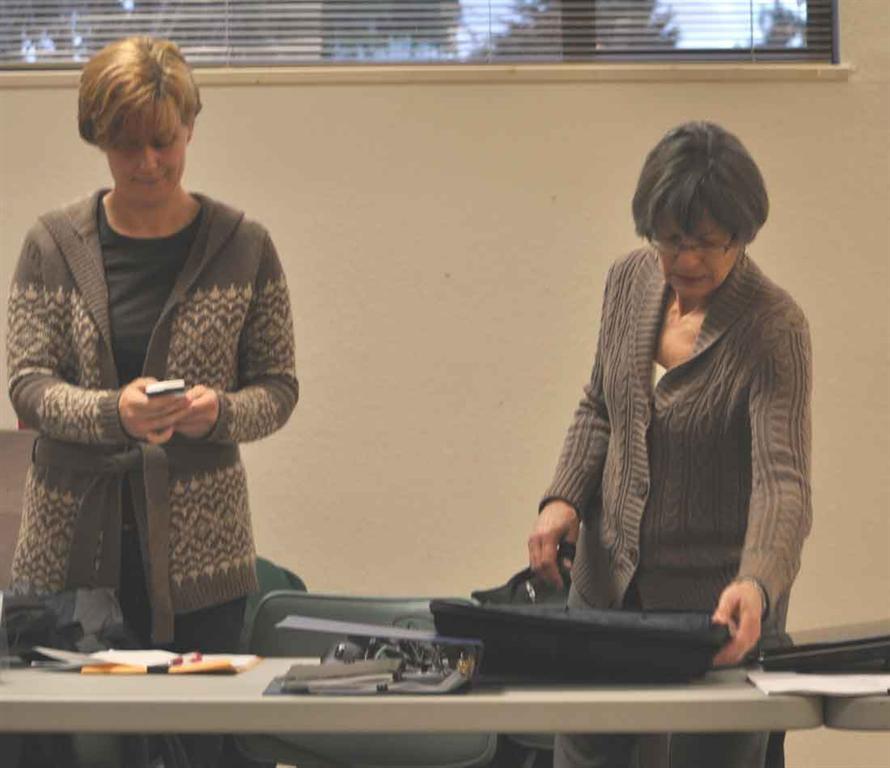 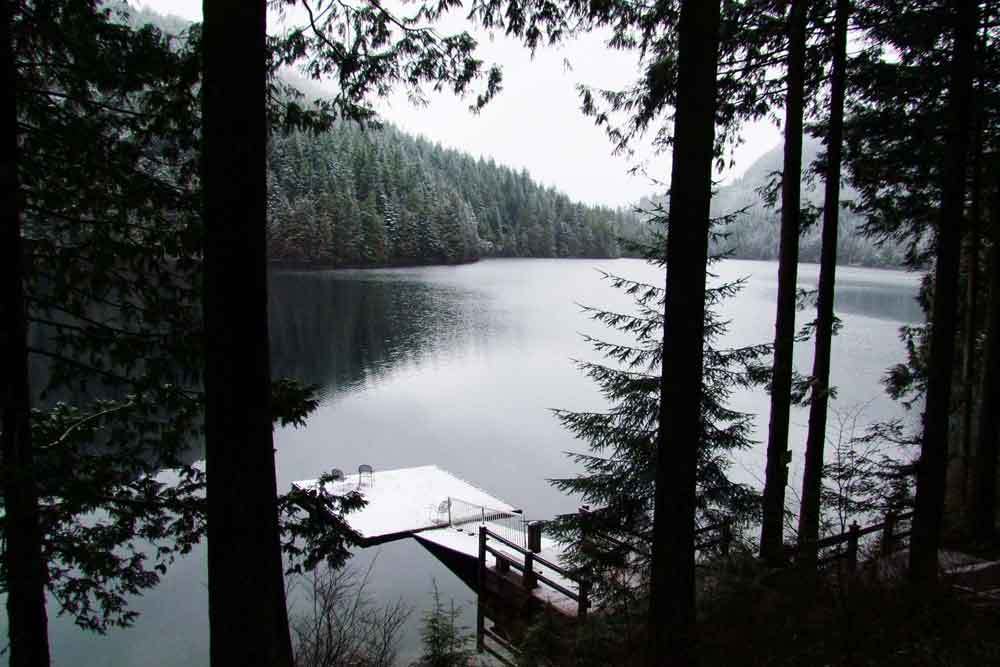 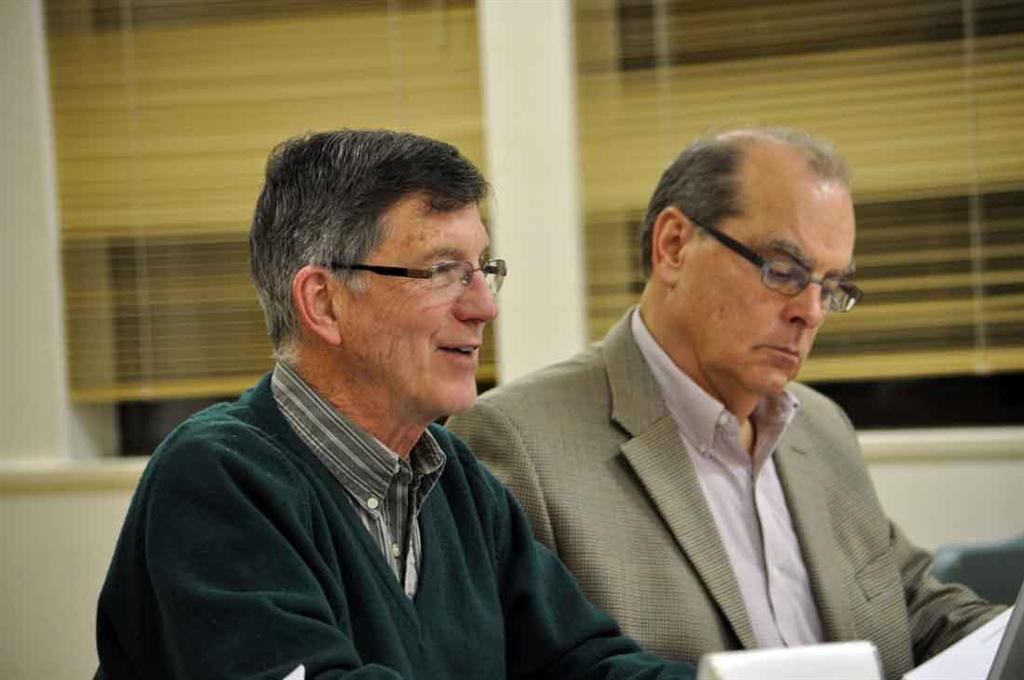 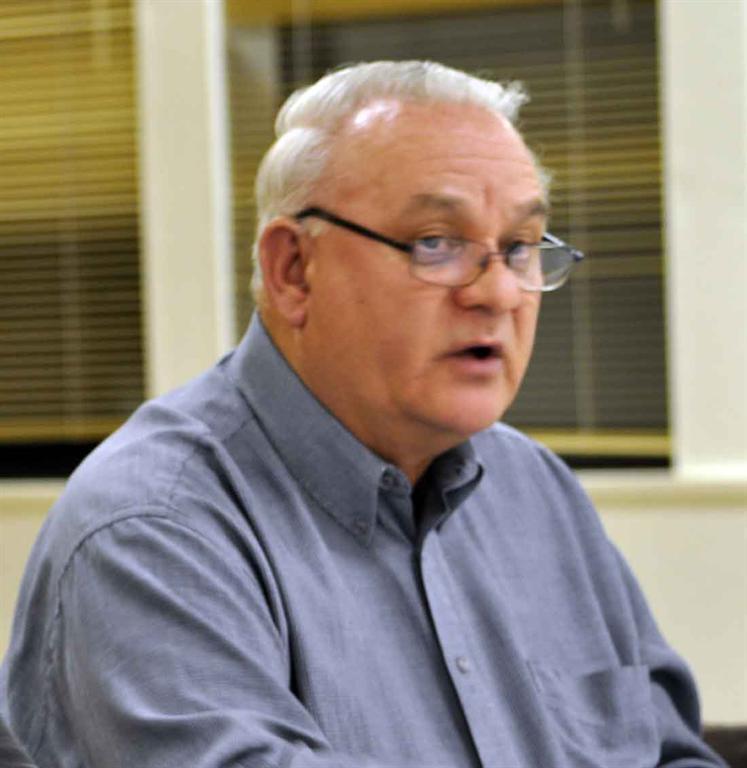 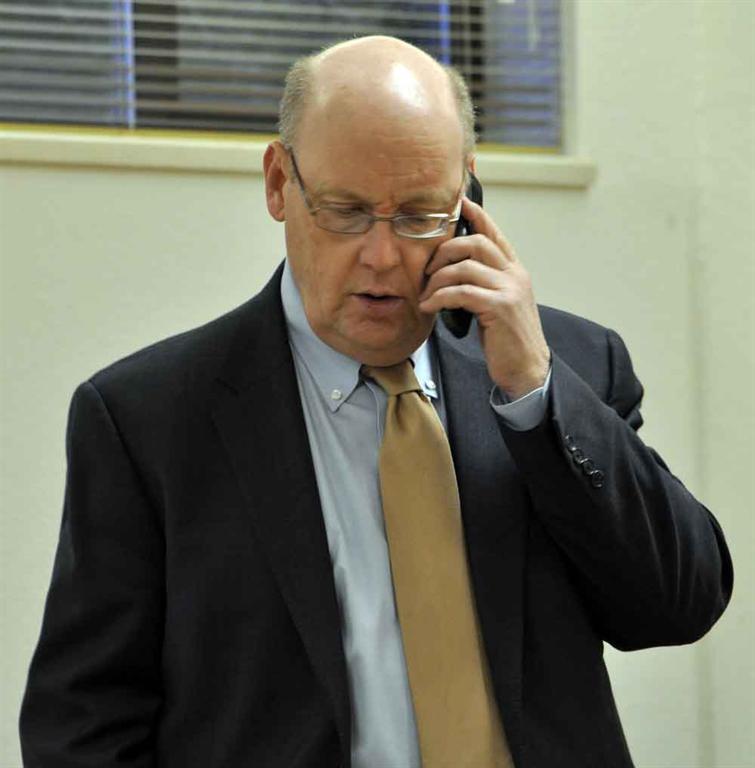 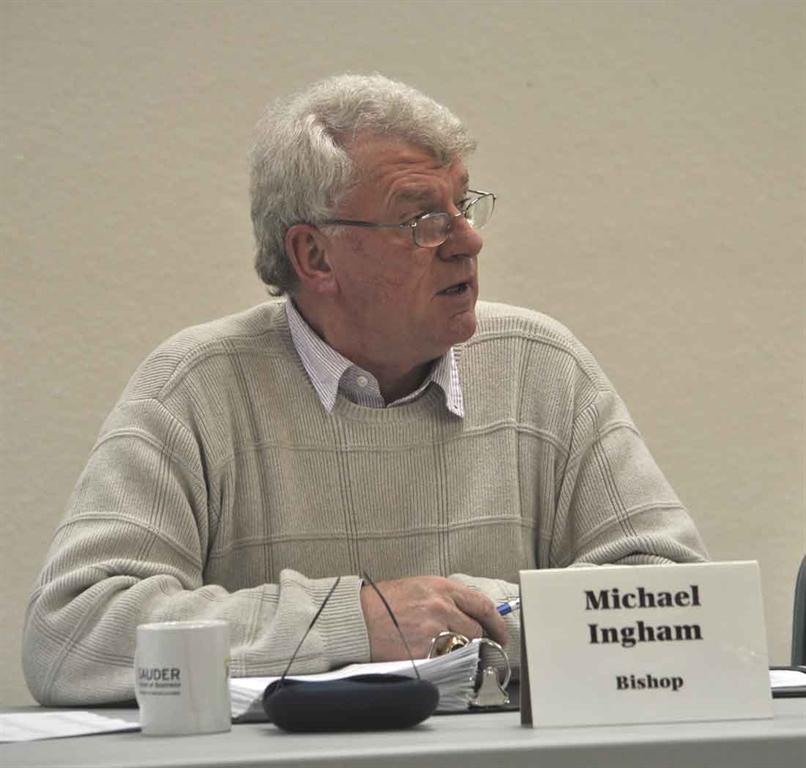 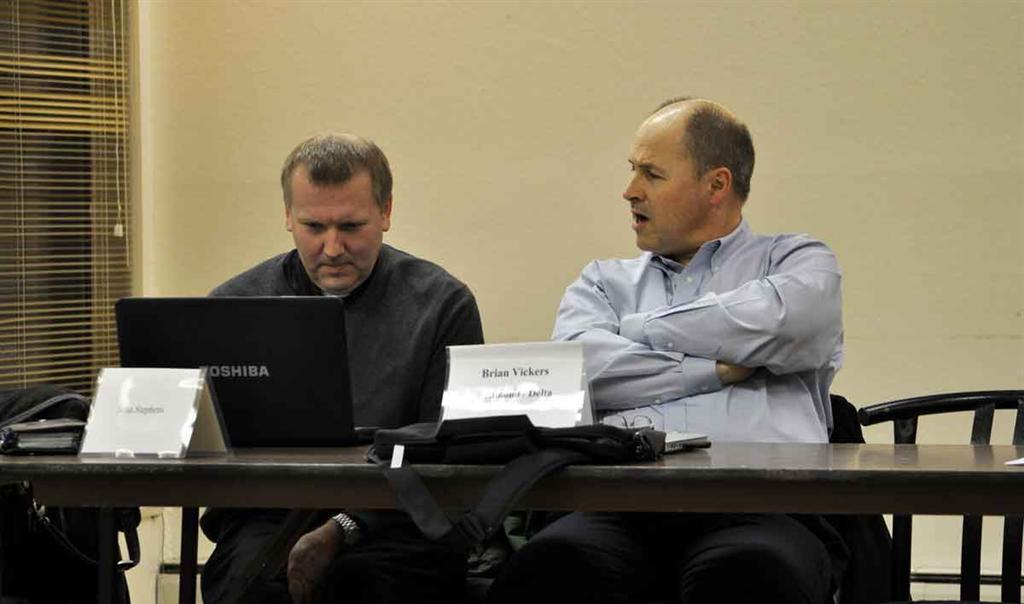 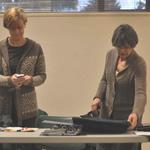 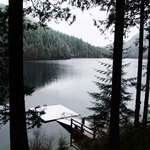 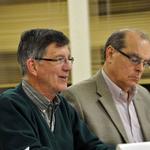 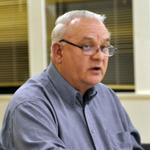 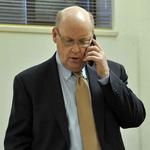 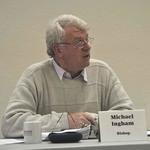 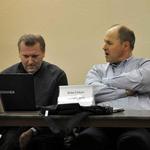 Bishop Michael encouraged Council members to think of Lent as the Season between two fires - Ash Wednesday to the Easter Vigil. The forty days are a shadow land. Lent is a time when we journey from light to light, but we travel through darkness, and during this time we look at our personal journeys of faith and the life of our church. It is not a time of desolation and despair as we still live in the light of Christ’s resurrection.
Other faith traditions also have seasons of fasting, almsgiving and self-reflection. It is a time of increased seriousness.
Many clergy present at this DC meeting had just returned from a very refreshing retreat at UBC’s Loon Lake Retreat Centre located at the end of a logging road past the town of Maple Ridge.
Bishop Michael referred to the leadership of retreat guest, Bishop Frank Griswold the 25th Presiding Bishop of The Episcopal Church as spectacular. His reflections and teachings were truly inspiring.

2. Present/Regrets
Attendance at DC was somewhat lighter than usual due to the busyness of the Lenten Season and the switch in the date from Tuesday, March 13th to Thursday, March 15th.

5. Correspondence – For Information
5.1 Letter from Compton Fundraising of February 27th, 2012

6.1 Diocesan Financial Campaign
The letter from Compton recommends a longer timeline for each facet of the proposed campaign. The Compton team feels that all involved should look more closely at the development of the case presentation and Compton needs more time to design and conduct the feasibility study. They have given August 15th, 2012, as the projected completion date for the study. With an August 15th completion date it has been proposed that a special one day Synod be held September 15th, 2012, to make a decision about going forward with the Financial Campaign.

The Motion to extend the timeline for the presentation of the case and feasibility study for the campaign was carried.

6.2 Audit Report and Audited Statements
Bishop Michael reminded DC that the major focus of the March meeting of DC is an examination of diocesan finances: Audited Statements, 2012 Revised Budget and 2013 Vision Budget for recommendation by DC to Synod.
Diocesan Controller, Mark Beley drew DC members attention to Page 3 of the document which is the Auditor’s Opinion. He then briefly went on to clarify a number of areas of the statements: income, expenses, cash flows and the notes about the various organizations connected to the diocese, funded by the diocese and/or have accounts handled by the diocesan financial office, including loans and other finances.
Bishop Michael asked for questions about the statements and there were none. Treasurer Ian Robertson encouraged DC members to study the material and if they found items that they wanted to discuss or have clarified that they call Mark Beley or Rob Dickson during office hours.
The Motion for recommendation to Synod to approve the reception of the Audited Financial Statements was carried.

6.3 The Motion to appoint Rolfe, Benson, LLP as Auditors for 2012 was carried

2012 Revised Budget
Assistant Treasurer Jim Stewart and Business Administrator Rob Dickson briefed DC on a number of different line items in the budget and on the whole there are no major changes, although gross expenses have increased slightly. The 2012 Revised Budget predicts a deficit of approximately $19,000 which is much improved over the $35,000 predicted in the 2012 Vision budget.
The Motion to present the Resolution to recommend the 2012 Revised Budget was carried.

2013 Vision Budget
Ian Robertson informed DC that this Budget was developed with close attention paid to the real possibility of a drop in investment and assessment income. Using these numbers Ian assured DC that this budget does stand up.
Assistant Treasurer Jim Stewart sees that there is some “creep” in increased costs and drop in revenue culminating with a projected $48,000 dollar deficit for 2013. However, there is capacity to bring forward $135,000 so there is a capacity to cover this shortfall.
The Motion to present the Resolution to recommend the 2013 Vision Budget was carried.

6.4 c) Diocesan Leadership School
Director for Mission and Ministry, the Rev. Douglas Fenton expanded on the information in the Precis.
Chancellor George Cadman asked if there had been any thought given to expanding registration opportunities to interested candidates outside the diocese, suggesting the inclusion of the Ecclesiastical Province of BC and Yukon.
Douglas answered that the current intent is to keep the Diocesan Leadership School localized in the diocese in order to develop and fine tune the program before opening it up to wider participation.
George Cadman then reminded DC and Douglas that funding could be made available for scholarships through diocesan access to the Anglican Initiatives Fund for funding.

6.5 Synod Motion #5 – Assessment Review
Ian Robertson and Rob Dickson explained that parishes with declining income may struggle with the rolling average that is used to calculate assessment. They stressed that the individuals responsible for diocesan finances have taken the concerns of the people who moved and seconded the Synod Motion very seriously and have developed some strategies to address those concerns.
At Bishop Michael’s request Rob gave some history concerning the establishment of the Diocesan Growth Fund which began as a way to source revenue to assist in the transitioning to the new assessment formula in 1996. During that special Synod, Synod expanded the purpose of the Parish Support Fund to become the Diocesan Growth Fund for ministry. This was a 2% surcharge in assessment to the 50% of parishes with the highest income levels in the diocese. This fund has been very useful as a support for a variety of parish and diocesan ministries. In 2003, Diocesan Synod recommended and approved as a special purpose using the resources of the Diocesan Growth Fund to assist in the transition of the loss of 26% of diocesan revenue following the 2002 Synod walk-out of 8 parishes.
Rob briefly outlined the changes to the assessment formula as contained in the motion.
George Cadman advised DC that only Synod has the authority to make amendments to the assessment formula.
The amendments recommend two significant changes – a two year modification of the Diocesan Growth Fund assessment and a cap on maximum assessment paid for all parishes. Particular details are found in the motion.
DC asked about parish income trends. About 1/3 of the parishes have increases of 2% or greater, 1/3 have had declines of 2% or greater and 1/3 are in a stable range.
The package on the table has been developed by the financial leadership of the Diocese to respond to those who moved and seconded motion #5 plus other parishes who have made representation to the financial leadership of the Diocese.
The Motion as contained on page 4.4 was carried.

Bishop Michael reflected on the complications of the assessment process and the fact that we all face changes in circumstances but the D of NW has always maintained its commitment to the National Church, the Ecclesiastical Province and the Diocese.
The amount of research and study that have gone into the work on this proposal is impressive and it is a direct response to the concerns of parishes.

6.6 Deanery of North Vancouver – Request for Curacy Funding
Rob Dickson reviewed the material contained in the Precis and then asked Rev. Andrew Wilhelm-Boyles to expand on the initiative.
Andrew told DC that this is a very exciting proposal for North Vancouver, an opportunity for a terrific benefit for the deanery but it is also of significant benefit to the D of NW as it is an opportunity to develop a new type of curate for a new kind of ministry. A candidate with community and social justice experience and skills would share those gifts with the deanery and the reciprocity would be the development of skills in parish ministry and liturgy for the curate.
The Motion as contained in the Precis was carried.


6.7 St. Philip – Grant request to Anglican Foundation
Bishop Michael reminded DC that this would be the second application to the Anglican Foundation from the Diocese of New Westminster. Dioceses are only able to recommend three grant requests per year.
The Motion as contained in the Precis was carried.
6.8 Item was withdrawn

the Diocesan Officers (Bishop, Dean, Executive Archdeacon,Chancellor, Treasurer, Assistant Treasurer)
the Archdeacons of the five Archdeaconries
the Archdeacon who is the Director of Deacons
two additional Diocesan Legal Officers, (Registrar and Legal Assessor)
a Lay Secretary, a Clergy Secretary,
the chairs of the Diocesan Standing Committees
there are two Deanery reps either Ordained or Lay. Sometimes Deaneries have two lay reps and sometimes two clergy reps, sometimes one of each. A Deanery is a group of churches, geographically affiliated and the reps are elected at the Annual Synod Meeting.
Synod Staff also attend meetings but are not members of Diocesan Council. They include: Business Administrator, Director of Planned Giving, Comptroller, Youth Coordinator and Communications Officer (and other staff as required).

Diocesan Synod consists of all the active clergy in the Diocese of New Westminster and 2-6 lay people elected from each diocesan parish proportionate to the size of the parish community.
Diocesan Council functions as the Synod between Synods, it is a representation of the large group that meets annually.
Diocesan Council and Diocesan Synod are both chaired by the Bishop.