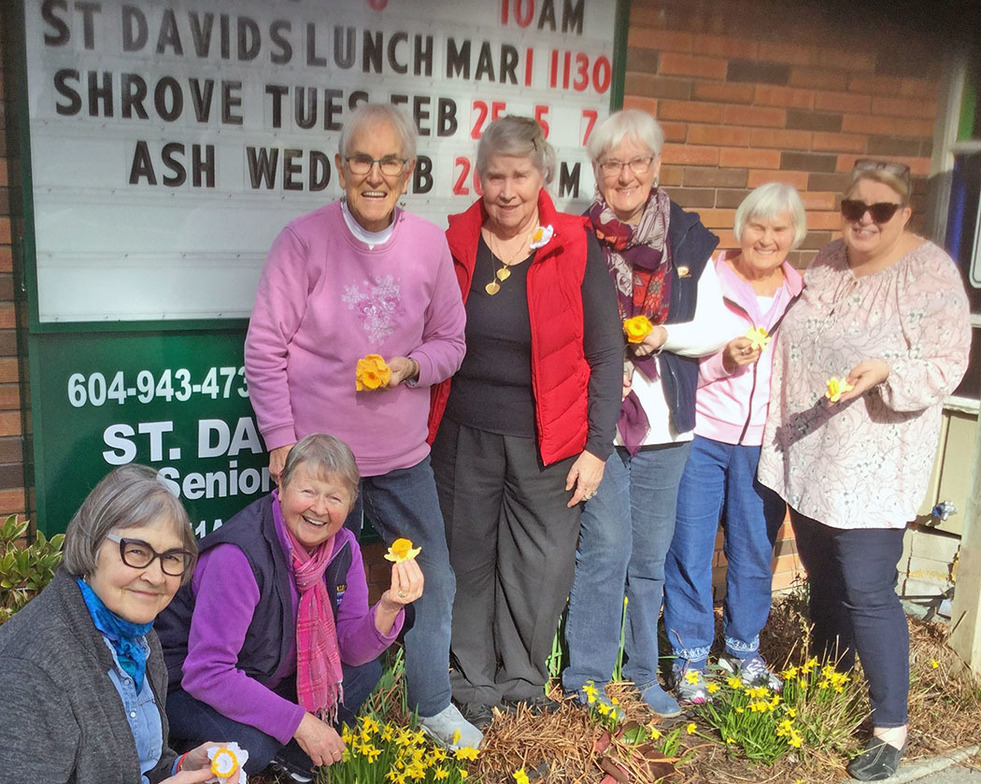 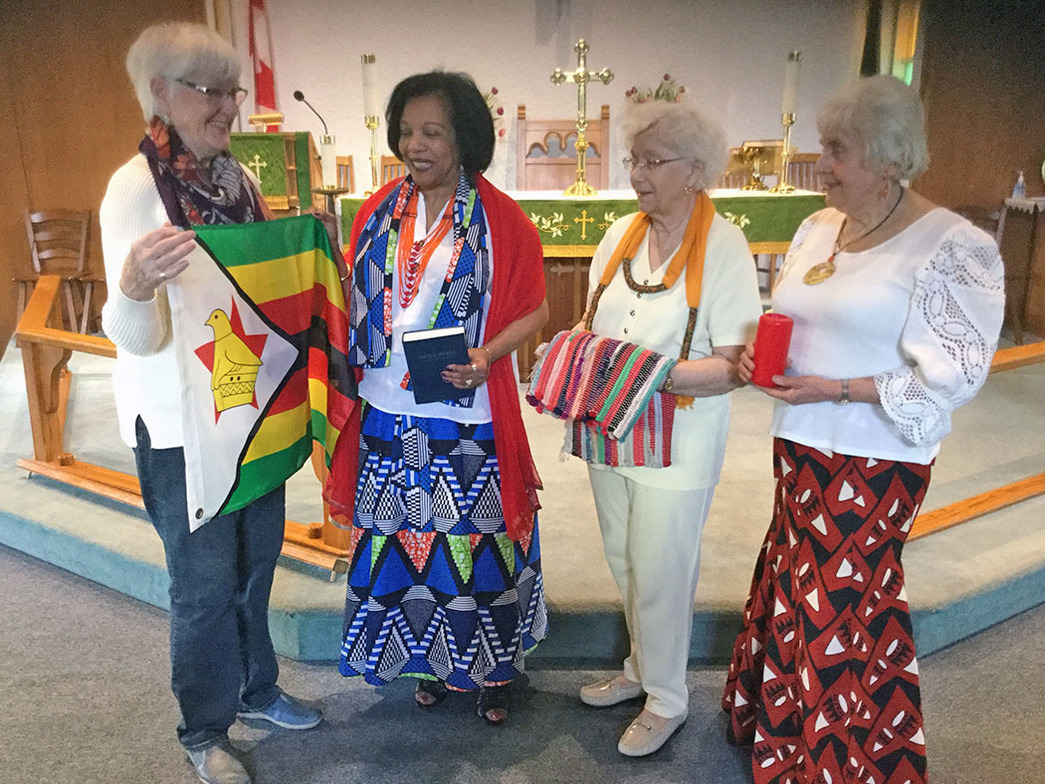 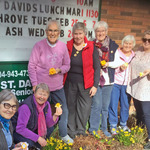 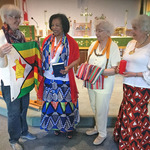 When St. David’s Needle Arts Group determined there was faint hope of any semblance of William Wordworth’s host of golden daffodils in time for St. David’s Patronal Festival (even in Sunny Tsawwassen), fellow arts-group member Gayle McMynn got busy with her knitting needles.

Undoubtedly there will be fresh-cut daffodils in St. David’s on Sunday, March 1, but there will be Gayle’s self-designed golden daffodil blooms as well – a lasting reminder of the sixth-century Celtic monk who became patron saint of Wales and namesake of Tsawwassen’s Anglican parish.

Guest Celebrant and preacher, The Rev. Maggie-Rose Muldoon, will speak on the life and legends of Saint David, while music director Sara Ciantar’s 10-member pop-up choir will feature special hymn selections reflecting the Welsh nation’s love of music. The day’s two services will end with the congregational singing of the familiar Guide Me, O thou Great Redeemer (Cwm Rhonadda).

The Feast Day of St. David is to be a two-fold celebration and so it’s from the ‘sound of Wales’ to the ‘taste of Wales’, for parishioners who adjourn to the decorated parish hall for Welsh cakes (picau at y maen) after the 8 o’clock service and both Welsh cakes and Cawl Cennin  (leek and potato soup) after the 10 o’clock service.

One of two symbols associated with Saint David and Wales, the daffodil was introduced in the 19th-century as an option to the humble leek -- the vegetable that in the seventh century became the national emblem of Wales. The leek arises from an occasion when a troop of Welsh soldiers was ordered to wear a leek on their helmet to distinguish themselves in a battle against pagan Saxon invaders. The battle is said to have taken place in a field of leeks. Many Welsh people wear both of the national symbols of Wales to celebrate St. David; the daffodil or the leek on this day.

Everyone is welcome to come and enjoy the sounds and tastes of Wales at St David’s Church, 1115- 51A Street, on March 1.

St. David parishioner Kay Foord, host-church-chairperson of the March 6 Ladner/Tsawwassen area World Day of Prayer, was overjoyed when she recognized the happy co-incidence that links the Zimbabwean-written worship service with the Rev. Simbarashe Basvi (future rector of St. David’s) presently serving in the Diocese of Central Zimbabwe.

The Rev. Steve Thompson, former deacon at St. David’s, will read an electronic message from Rev. Basvi in Harare in which he elaborates on the theme chosen by the women of Zimbabwe, Rise! Take Your Mat and Walk (John 5: 2-9a). Fr Basvi’s missive ‘takes’ the afternoon gathering to Jerusalem’s healing pool of Bethesada where, he depicts, “Jesus is ready to tell us to Rise up and Walk”.

Among those with special parts in the annual Prayer Day worship program of Readings, Meditation and Song are Roberta Beaudreault and Trudy Rossler from South Delta Baptist Church, and Enid Sherer from All Saints’ Anglican Church, whose procession to the altar will open the service.

They will carry into the sanctuary a Bible, mat, and candle, each wearing one of Zimbabwe flag’s predominant colours – red representing love, white representing peace and yellow representing reconciliation.  The Zimbabwe ensign’s seven horizontal stripes of emblematic green (agriculture), yellow (minerals), red (blood shed for independence) and black (ethnic majority), also features a white triangle (peace) on which a Zimbabwe bird is centred on a red, five-pointed star.

The nation’s pennant-shaped flag was adopted when the country, formerly known as Southern Rhodesia, gained its independence from the United Kingdom in 1980.

Refreshments will be served in the parish hall following the service.