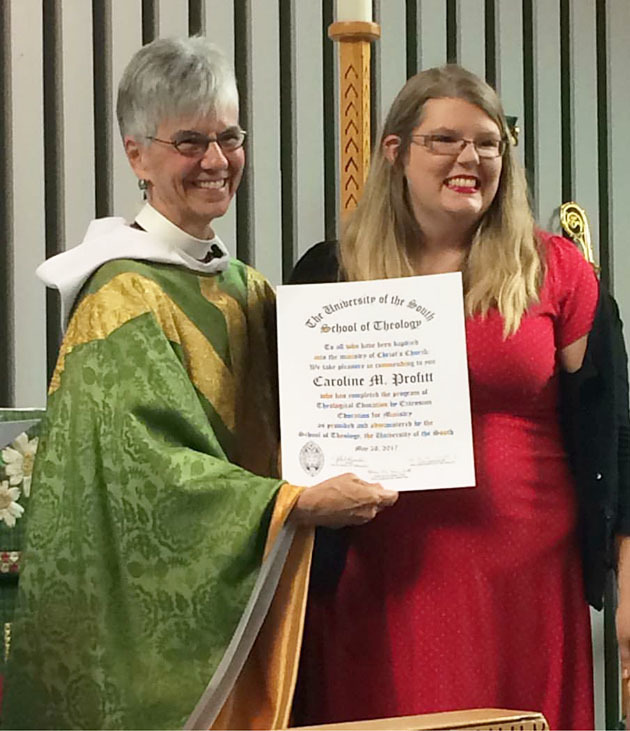 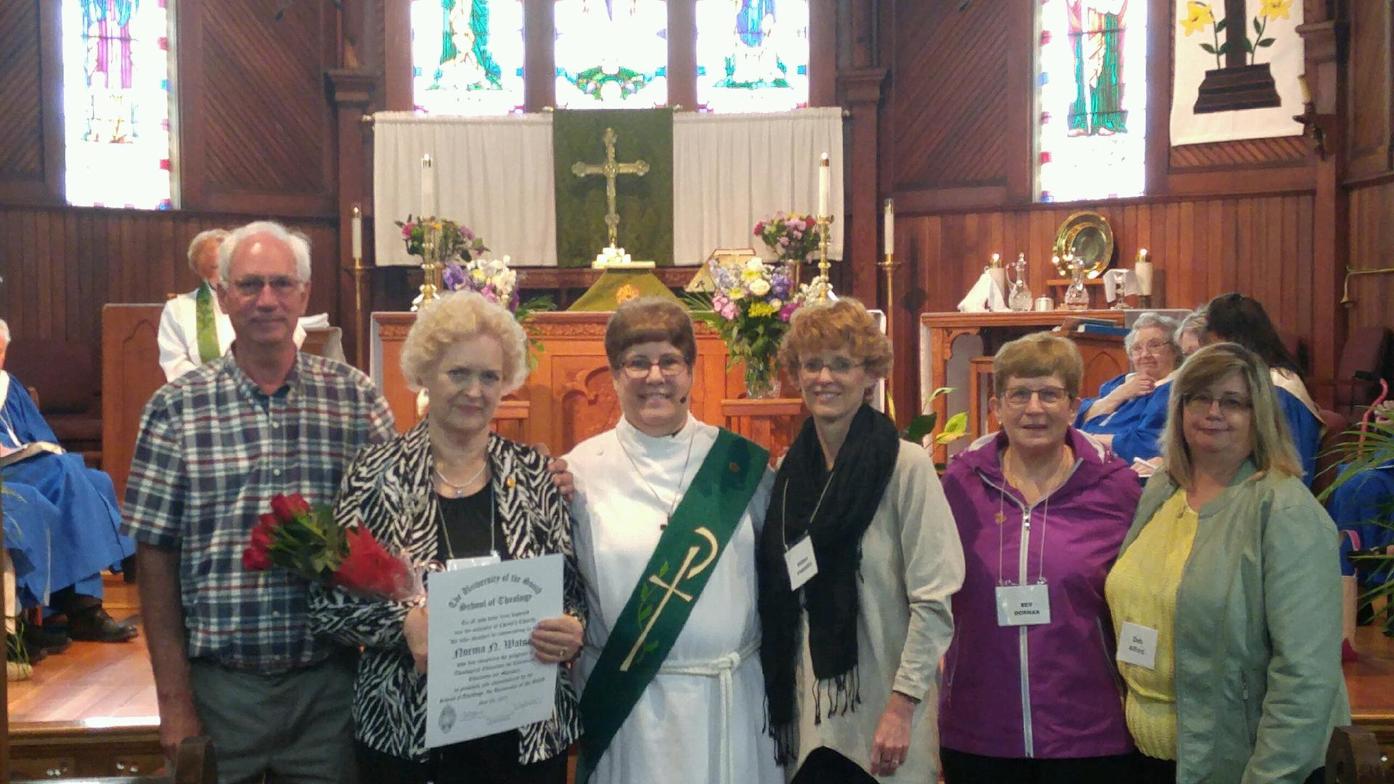 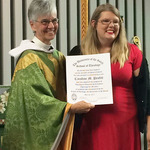 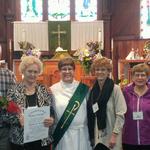 “for me, God does not choose the equipped, God equips the chosen.”

These words were spoken by Deacon Karen Saunders during the homily at the 2017 Education for Ministry (EFM) Graduation, held this year on June 17th at St. Christopher’s, West Vancouver. This year’s service was early in the day in order that group members from Sechelt could attend.

Karen has been a mentor for the EFM programme, serving the Langley region first from St. George’s, Fort Langley, then St. Andrew’s, Langley after the Ministry Assessment Process (MAP) when the two groups combined.  (St. Dunstan’s in Aldergrove, has also been an EFM group location.)  Karen told the congregation,

“ In my eight years as a mentor I have seen participants and graduates of EFM undertake so many different ministries. Within their parishes EFM [participants] have served on the Altar Guild, Parish Council, the outreach committees; on diocesan committees and programs; as readers, intercessors, Eucharistic administrators, musicians, members of the prayer team, servers and pastoral care volunteers. I have seen them take their ministries to workplaces as nurses, teachers, parish administrators and business people. They have volunteered in the community with the RCMP, as a rape crisis counselor, working with mothers in need in our Best Babies Cooking Club, settling refugee families, mentoring LGBTQ kids in a high school, leading service clubs, volunteering at the local hospice – the list goes on and on.”

“Every Christian, by virtue of our baptismal vows, is part of the [ensemble of care Jesus’ disciples became as he sent them out into mission - Matt 9:35-10:8], but you have chosen to learn more, to go deeper and to explore what it means to serve God in ministry. You have read, studied, reflected, created community and in it shared in worship and in theological reflection in order to deepen your understanding of what it is to minister in Christ’s name, and to discern where you may be called to put your gifts to their best use…”

Deacon Karen’s sermon illustrates the many ways in which lay women and men serve Christ in the Church and in the world, which is, as she noted, the whole reason EFM was launched in 1975, originally for use in the supporting dioceses of St. Luke’s School of Theology at the University of the South, Sewanee, Tennessee. The vision of nurturing the faith of the laity with resources rooted in a seminary foundation spread rapidly through the USA, then internationally, and EFM is now an international program with affiliates in Canada, the Bahamas, Great Britain, Botswana, Germany, Italy, the Netherlands, Australia (which includes Hong Kong), and New Zealand.  Four new groups in the Virgin Islands are being organized.

EFM has been in this diocese since 1995, though St. Hilda’s, Sechelt, had already been sponsoring a group for several years under the mentorship of then rector and now Director of EFM-Canada, the Reverend Dr. Catherine Hall.  There have been a number of groups around the diocese, serving for different periods of time.  At present there are groups at Christ Church Cathedral (2 groups), St. Hilda’s, Sechelt, St. John’s, Port Moody, and St. Thomas, Chilliwack.

Current co-Coordinator of EFM in our diocese the Rev. Paula Porter Leggett says,

"No one programme is for everyone... but I believe that EFM has so much to offer people who want to understand better what the Bible means and how that takes shape in contemporary living.  I am always excited by the learning of those who have gotten to the Church history year (Year 3) because they begin to get the bigger picture of how the church through the ages has wrestled with critical questions that are – surprize! – the same questions we wrestle with today:  what is the relation of church and state, what power do bishops really have, what about people who think differently than ‘my church’? ...  I remember how Bishop Jim Cruickshank told us that the diocese of Cariboo was able to respond to the crisis of bankruptcy and the choices forced upon it with courage and faith, because so many of the leaders in it had been through EFM and came to the process with incredible perspective...  For myself, I expected my education at theology school to be like EFM only better – and to my surprise it was really the other way around.  In EFM we are constantly engaged in the art of ‘theological reflection,’ and at seminary we worked as reflective groups only for one or two courses.  As a parish priest I have valued engaging the materials time and again with the questions, perspectives and experiences of different people challenging me as pastor, preacher and practitioner.”

Most EFM groups start up in September. The two groups at Christ Church Cathedral are January start-up groups.  Small group, adult learning is taken seriously and no group may have more than 12 members (plus mentor).  The EFM groups in Port Moody, Sechelt and Chilliwack are currently (Summer of 2017) registering for the September start up.

The programme covers four years, and people can take time out if they need to and retain their year-level status when they return.  Diocesan sponsorship means the cost is $350 per year (includes the annual Reading & Reflection Guide).  Textbooks are obtained by members in the way that works best for them, new or used, e-book or hand-held.  This is one way the Canadian programme has been able to hold the cost down.  Groups meet for 36 weeks per year, usually on a week-night or afternoon.

EFM is also available on-line. These groups serve learners across Canada so they tend to be offered during the day. But Paula believes that there are probably enough people interested in an on-line learning platform that we could fill a group in the evening here in the diocese.

2017 graduates for the Diocese of New Westminster

For more information about EFM, about having a presentation in your congregation or deanery, or about joining a group, please contact Rev. Paula Porter Leggett.

Information about EFM is available on-line.