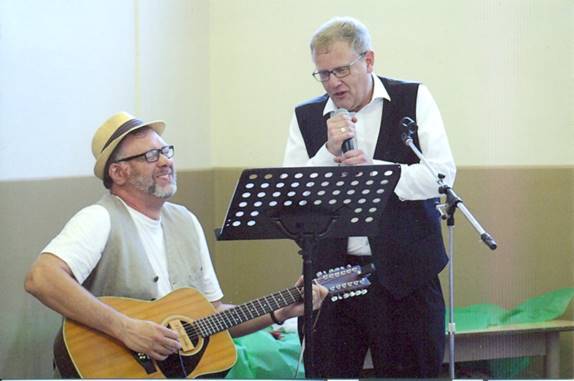 And Lowers Them at the Same Time

Saturday June 24, 2017, the second annual “Dinner with Ed” was held at the Anglican Parish of the Church of the Epiphany ("Epiphany" or APOTCOTE). "Dinner with Ed" refers to the parish's outstanding chef named Ed who does a truly inspired roast beef, roast potatoes, Yorkshire pudding dinner.

Jevon Anonby an obscure and mostly irrelevant independent recording artist, provided accompaniment for the vocal stylings of the Archdeacon of Fraser, the Venerable Stephen Rowe.  Father Rowe as he likes to be addressed, offered his services as a vocalist for one song if those in attendance could raise $100. The resulting donations exceeded $150 and Father Rowe delivered upon his promise.

The first song was an emotional interpretation of the Eagles 1976 classic  “Hotel California” which was followed by an encore which was a moving cover of the BTO version of “House of the Rising Sun” from which the accompanying photograph was taken.

It should be noted this is the only time where he had the mic even close to his mouth. Other pictures I’ve seen have him pointing it at him stomach, or lower. I figure this was on purpose as his dulcet baritone was likely emanating from his diaphragm.