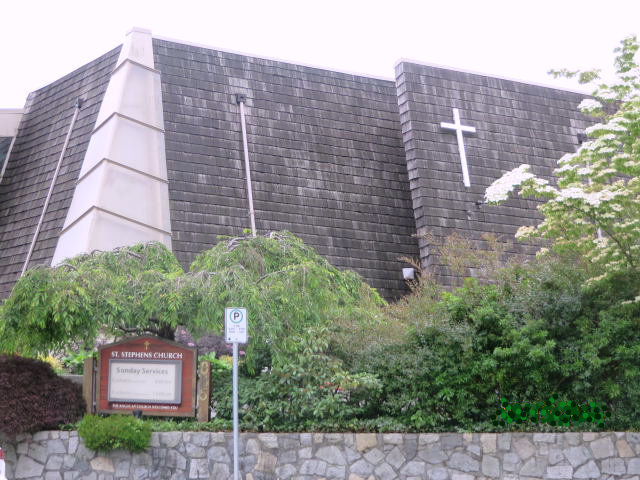 The fall of 2017 which is quickly going by was a busy season for the members of St. Stephen’s Anglican Church, West Vancouver. The highlight was the celebration of the 50th anniversary of the opening of the “new “ church on June 11th, 1967. Over 75 people attended and focussed on the memories of their times in the old church, and the excitement of being part of the design of the new one. A table filled with historic photos was a central attraction that became a place to recognize members who were at the original dedication. During the service the rector, Rev. Jonathan LLoyd asked these people to surround the table and to be acknowledged by the congregation. After prayers were said in thanksgiving, luncheon was served in the lounge.

Later that week Jazz Vespers featured Nick Apivor & Re-Vibe band on Oct.29th. This very popular feature of Sunday worship (@4pm) takes place once a month and is organized by Peter Vanderhorst. On November 19 Laura Crema and the Krisian Braathen Trio led the music beginning with “Without a Song” which led into the worship service of a scripture reading, a reflection led by Reverend LLoyd, and prayers. “He’s got the Whole World in His Hands” was the vesper song, in which the entire congregation joined in. It was led by Peter Vanderhorst at the grand piano.

The church choir under the leadership of Dr. Annabelle Paetsch had its weekly Thursday rehearsals and performances at Sunday services amply rewarded by the invitation of John and Ruth Brock for lunch after the Sunday service on October 29th. As the couple live on Eagle Island (a 5 minute short boat ride from the mainland) the luncheon became a travel experience with a holiday atmosphere.

The St. Stephen’s Community Choir was initiated last year under the team of Dr. Paetsch as the accompanist and Douglas Lau as the conductor. There are no membership fees. The choir meets once a week on Thursday afternoons at 4:30, and so far has performed at the Remembrance Day service on November 12. The members have varied skills, but the ability to read music is not required. The choir is scheduled to perform at care homes during the Advent season.