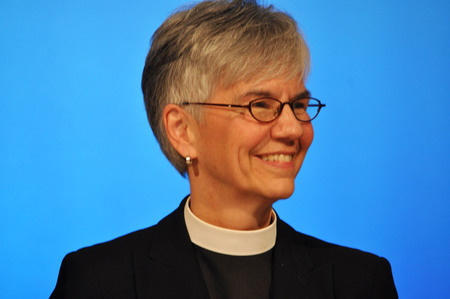 November 30, 2018, marks five years since the election of the Reverend Canon Melissa M. Skelton as the 9th Bishop of the Diocese of New Westminster.

In the culture of wedding anniversaries, it is commonly acknowledged that the 5th anniversary indicates that the married persons are no longer "newly-weds" and that apporpriate gifts be made out of wood or silver. However, to many of us it seems like only yesterday on St. Andrew's Day in 2013 that Archbishop Melissa was elected. It was also 37 years to the day that six women were ordained priests in the Anglican Church of Canada, two of those at Christ Church Cathedral, Vancouver, the venue for the 2013 episcopal election. These were the first women to be ordained priests in Anglican Church of Canada.

When the third ballot was called at 1:41pm on that Saturday afternoon, four nominees remained on the ballot and the results showed that the Reverend Canon Melissa Skelton had received a substantial majority of votes from both houses, clergy and lay. Clergy: 81 of 119 and Lay: 126 of 173

The announcement was made at 2:20pm.

The Consecration and Ordination of the Reverend Canon Skelton took place on St. David's Day, March 1, 2014, at the Vancouver Convention Centre and at Christ Church Cathedral.

On May 12, 2018, then-Bishop Skelton was elected Metropolitan of the Ecclesiastical Province of BC/Yukon on the first ballot earning the honourific "Archbishop".

A very happy election anniversary to Archbishop Skelton, to everyone in the diocese, the national church and the Anglican Communion.