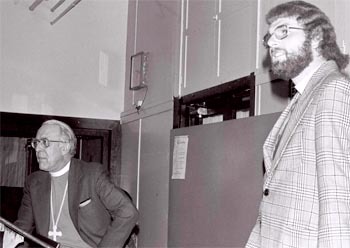 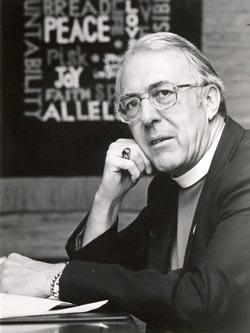 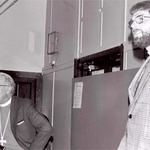 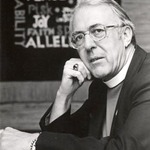 Archbishop Edward Scott, who died in an automobile accident near Parry Sound, Ontario, on Monday, June 21, had many ties to the Diocese of New Westminster and British Columbia.

Though born in Edmonton in 1919, much of his youth was spent in Vancouver. He grew up on the east side of Vancouver where his father, the Rev. Tom Scott, was rector of the working class parish of St. Nicholas, Burnaby (now merged with Christ the King, Burnaby, to become the parish of St. Timothy).

He attended Anglican Theological College, forerunner to the Vancouver School of Theology, and as a postulant served as an assistant to Dean Ramsay Armitage at Christ Church Cathedral in 1940.

He later remembered a reprimand from Dean Armitage for wearing a blue shirt under his cassock instead of a white one. “I couldn’t make sense of it... why was it such an important issue?”

The young Scott was far more interested in issues of social justice than ecclesiastical form. He was critical of Cathedral style of outreach during the difficult economic times. He later recalled that the parishioners of Christ Church “were prepared to supply money for hampers,” the archbishop once recalled. “But there was no attempt to really try to analyze why people should be unemployed.”

This side of Ted Scott became very evident after he became primate. Archbishop Scott spoke out on issues such as abortion, the death penalty and the ordination of women. He was an advocate for the recognition of same-sex relationships.

His recent biography, Radical Compassion by Hugh McCullum, quoted the archbishop as saying: “Homosexuality is not a choice; it is a discovery. I now have a deep conviction that gays and lesbians were created by God and are loved equally with heterosexuals by God.”

As Primate, he was named moderator of the Central Committee of the World Council of Churches from 1975 to 1983. During that time he helped to focus global attention on the plight of black South Africans living under apartheid.

Scott was also a strong advocate for aboriginal issues, and led a delegation to Parliament in 1976 that opposed government policy on land claims and northern development.

He received the Pearson Peace Medal in 1998 and was named to the Order of Canada in 1978.

“It’s a tragic end to a great life,” said Bishop Michael Ingham. Bishop Ingham said that as a young priest who came to Canada in 1974, he was highly impressed by then Primate Scott’s passion for social justice.

“He was a man with a passionate heart, passionately interested in justice for people,” said Archbishop Terence Finlay, recent Bishop of Toronto.

Before becoming Primate of the Anglican Church of Canada in 1971, Archbishop Scott was Bishop of Kootenay in southeastern British Columbia.

According to the Globe and Mail newspaper, Archbishop Scott died after the car in which he was travelling left Highway 69 about 18 kilometres south of Parry Sound Monday afternoon.

The car, driven by his close friend Sonja Bird, rolled over and landed upside down on a metal culvert. Police are still investigating the accident but said no other vehicles were involved. Ms. Bird was transported to hospital with serious injuries.