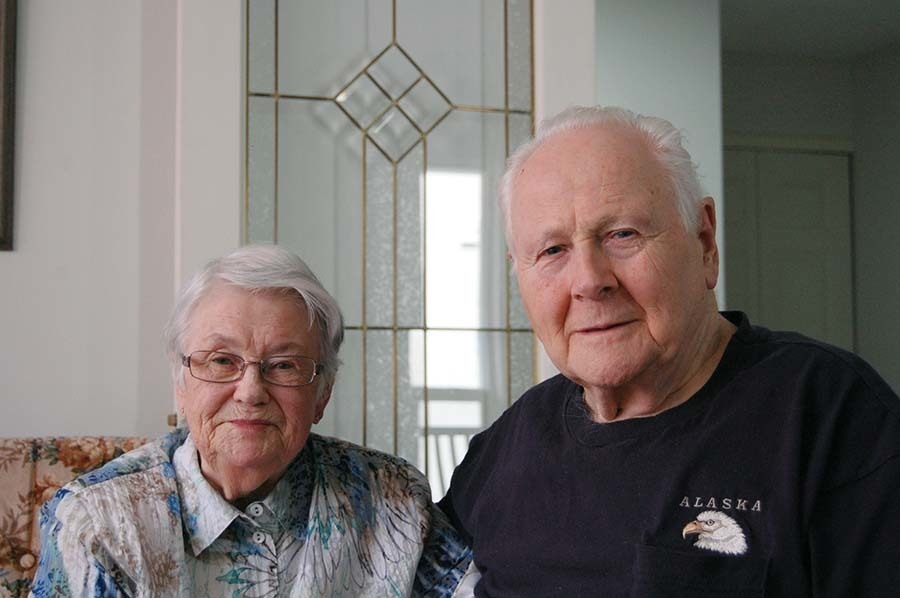 Wednesday, April 8, 2020, marks the 70th Wedding Anniversary of a beloved couple at the Anglican Church of the Epiphany. They were married at the United Church in Kamloops on April 8, 1950.

Betty and Don have devoted their lives to the Church, and the Anglican Church in our diocese since 1957.

It seems fair to say that Don and Betty Stebbing were early adapters in the life and witness of the Church. In the 1930s Don’s attendance at St. George’s, North Kamloops Sunday School was 100%. Meanwhile Betty Fraser was teaching Sunday School at Glenboig Presbyterian Church, Lanarkshire near Glasgow, Scotland.

Betty moved with her family to Kamloops in 1947, and joined the United Church where her aunt worshipped, and where they later married.

Don worked for CN Rail in Kamloops until a conversation with a staff member one Sunday evening resulted in a transfer that had him working in Vancouver the following Thursday.

Now located in Vancouver, St Thomas’, Collingwood in the Diocese of New Westminster was nearer to their new home than the United Church, and with four young children the Stebbing family became a central part of that congregation from 1957 until 1992.

Don was a principal leader of the Men’s Group for 12 years, tasked with the responsibility of selling plants at the annual Spring Fair. Under the Reverend Ernie Eldridge he became treasurer and part of the Administration and Finance Group. Don was rector’s warden, people’s warden, served on the Canonical Committee and the Maintenance Committee. Don was also President of the Vancouver Transportation Club that met monthly for dinner at the Stanley Park Pavilion.

Both Don and Betty were involved in Bible Study at St Thomas’, and were very much part of the Cursillo Group in our diocese, Don serving as president.

Meanwhile, Betty served on Parish Council and was Chair of the Canonical Committee that appointed the first woman priest to St Thomas’. She was involved as a leader with Brownies and Guides. She was part of Little Helpers, ACW as well as Christian education lay leadership. For nine years Betty served on the St Jude’s Board, two as President. However it was a life-threatening illness (including treatment at the Mayo Clinic) that guided her into pastoral care, hospice work and later as a hospital visitor and trainer.

In 1967, Betty was given two years to live and throughout her illness and treatment was ably cared for by Don. Betty says Don was ‘as Christ’ to her during those difficult days, and Christ was and remains always at the centre of their marriage.

When the couple moved to Surrey in the early nineties their work for God continued unabated. Both were involved in Pastoral Care, Bible Study and Betty was part of a group that established a healing ministry in the parish.

Both Betty and Don have been awarded the ODNW; the present rector aware of all that the both have given to the Anglican Church. In fact in order to make a purely non-partisan decision he had them draw lots to decide who should receive the honour first!

In the nineteen years I’ve known this couple I have been so encouraged by their faith, love and commitment for Christ, the Church, their family and each other. And I know I am not alone. Many people who know them are inspired by their grace and dedication.

The Anglican Church (and especially St Thomas and Epiphany) are so much the richer for their active and hard-working participation for well over 60 years.

One of the joys of remote worship during the COVID-19 pandeminc has been the ability of Don and Betty to participate in worship once more ‘at’ Epiphany. Poor health has made it difficult for them to get to church on a regular basis. It has been a delight to see their faces in the screen during our virtual worship.

Our love and congratulations to Don and Betty on their milestone anniversary; we trust they have a pleasant and joyful day on April 8 and beyond as they remember their years together and as they look forward to celebrating the resurrection of Christ this coming Easter Day.