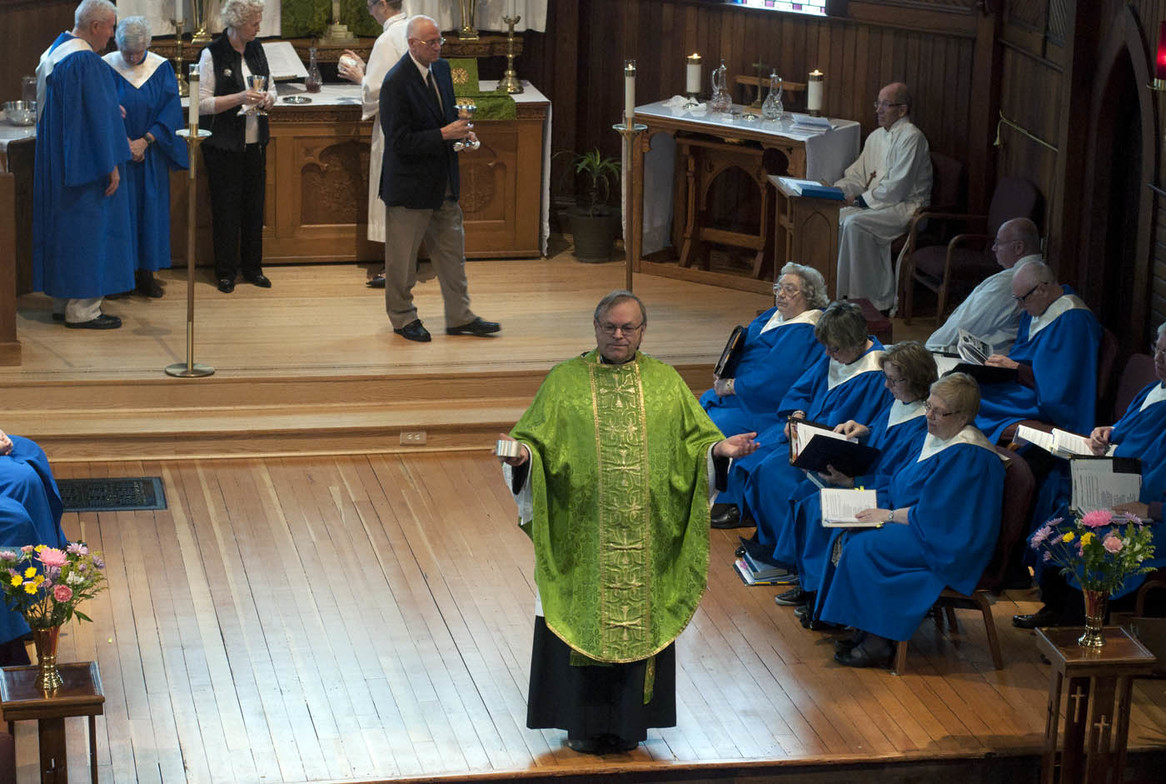 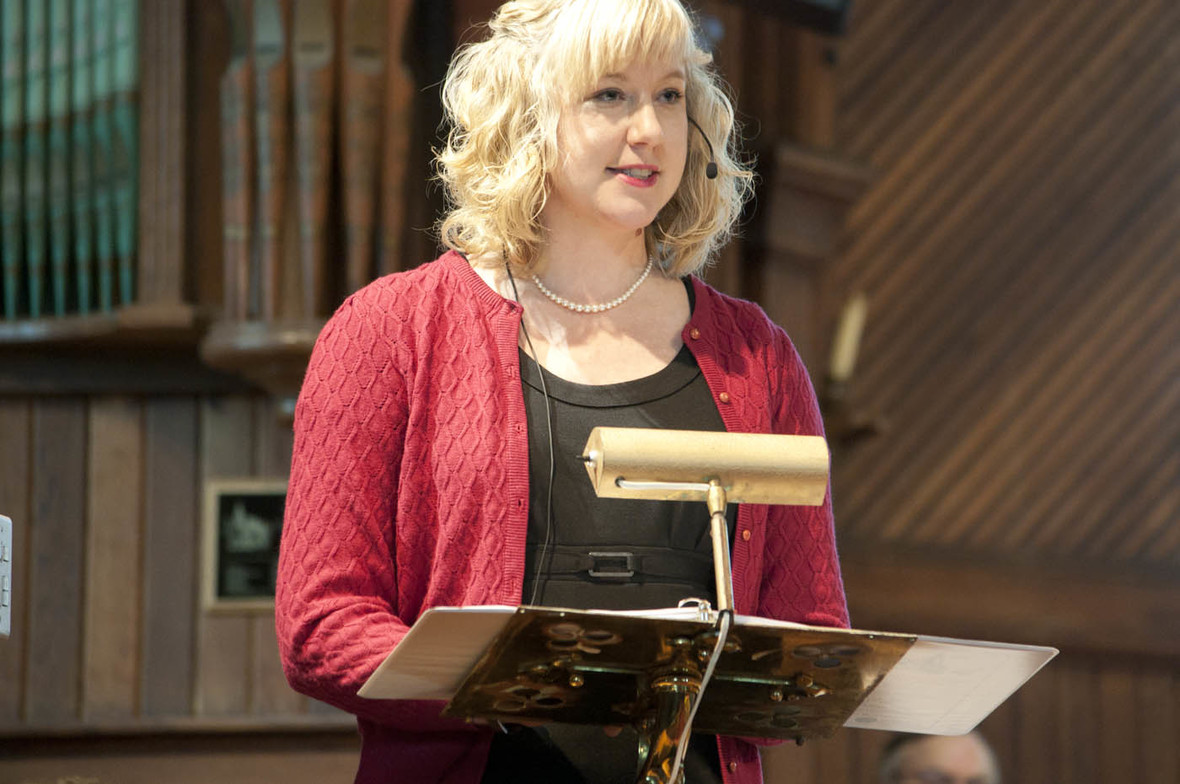 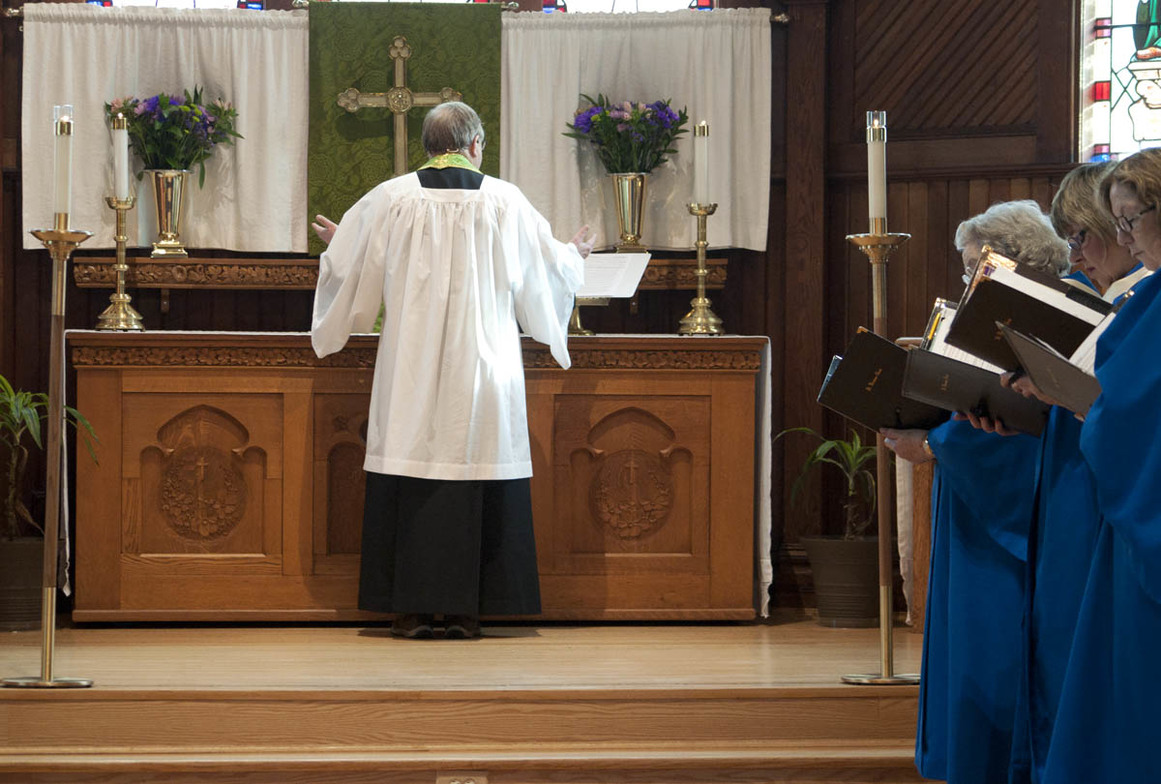 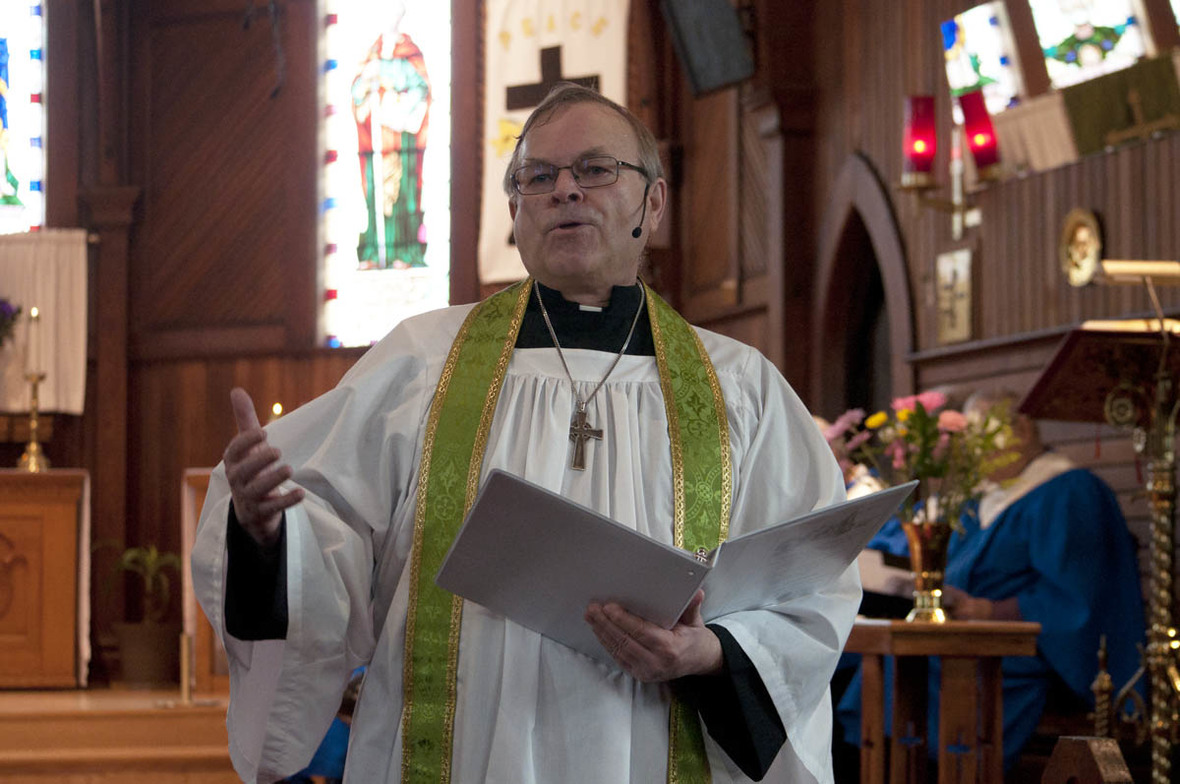 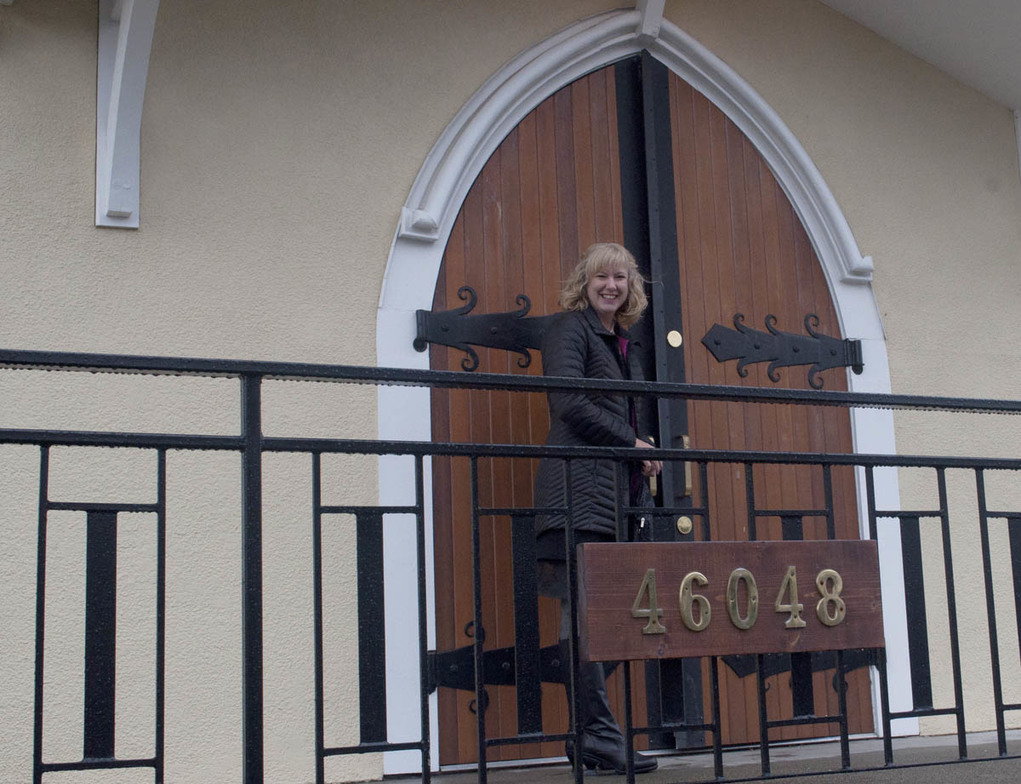 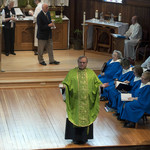 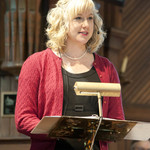 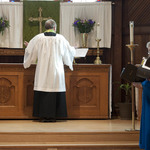 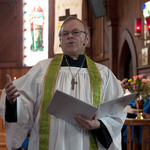 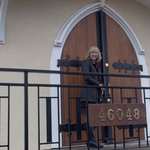 The Fraser Valley is a region of southern British Columbia that boasts a rich history and the Anglican Church of Canada as a national expression of the Church of England throughout the world also has a rich history. These two elements blended together on the morning of November 15, 2015, at St. Thomas’, Chilliwack to mark the parish’s 142nd anniversary with an “heritage” celebration of Holy Communion, using the service contained in the 1918 version of the Church of England Book of Common Prayer. The 1918 Edition was the first Prayer Book to be published in Canada. In his notes found on the inside front page of the November 15 Order of Service leaflet, St. Thomas’s rector, the Reverend John Sovereign says, “The Canadian Edition was most welcome.”

There was a good-sized congregation gathered at St. Thomas’, for the heritage worship. There were a number of people in attendance from the Chilliwack Historical Society and some others who had made a special point of attending this worship event in order to be present for the homily that would be given by the Anglican Archivist for the diocese of New Westminster and the Ecclesiastical Province of BC/Yukon, Ms. Melanie Delva. For the past 10 years and continuing currently, much of Melanie’s work and ministry have involved researching and sharing information about the Indian Residential Schools programs that took place in the geographical areas of the two Anglican entities that she serves. The primary recipients of information were and are the Truth and Reconciliation Commission established in 2005, and the student/victims of that horrific system, their relatives, friends and descendants. During her work, Melanie’s entire perspective regarding the Church, the Government, faith, racism, justice and humanity underwent a profound transformation. She is considered one of the leading non-aboriginal spokespersons in the church on the subject of reconciliation and is a much in-demand speaker. A person of faith, Melanie looks very carefully at the messages of the Gospel in order to communicate her sincere wish that we come to experience “the face of Christ” in all people and never again treat others as “less than ourselves.”

There were a number of anachronisms apparent during the heritage Holy Communion liturgy. I suppose the most obvious being the fact that a woman would be the homilist, but there were also microphones, the blessing of the recently installed air conditioning system, a large Purel dispenser placed in the middle of the main aisle following the Eucharistic Prayer and an acclamation composed by Healey Willan. But of course these historical inconsistencies had nothing to do with the purpose of the worship event. In his Thank You! on the back page of the leaflet, rector, the Reverend John Sovereign wrote, “We hope that this very-changed-within-our-life-time service of the Church of England in the Dominion of Canada may have brought back some memories. It was the authorized service used through 1962. It reminds us of the vast changes in culture, language, thinking and Christian faith that have taken place and have been experienced through the past century of life at St. Thomas’. “

Prior to worship, Reverend Sovereign stood in the aisle in the nave in front of the chancel entrance and shared some information regarding the different practices of worshippers attending Holy Communion (primarily in the first half of the last century) compared to what is both acceptable and appropriate today. Although parts of the 1918 service were not included, most of the worship content was authentic, complete with Reverend Sovereign as officiant offering the prayers to the high altar with his back to the congregation.

After an opening invocation, Melanie Delva began her homily saying, “I would like to start by acknowledging that we are a church worshipping on traditional territories taken from the St:lo people. I am profoundly grateful for their continued presence and their traditional and spiritual witness to those of us who inhabit their lands.”

Melanie congratulated the parish of St. Thomas’ on 142 years of mission and ministry in Chilliwack and the surrounding area and spoke to those gathered about their parish and it first rector, “Obviously, I love history, so being in this place at this time is meaningful for me. I have seen many images of this building, some with finely hatted women on the steps, some with the church on massive timber rollers ready to be moved, some with images of early rectors eerily superimposed onto the photo over the church, as if their spectres still held sway over the direction and decisions of the church - as if the living were somehow accountable to the dead. And maybe they are…?

In preparation for today, I have spent a lot of time thinking about the Rev. George Ditcham, St. Thomas’ first full-time rector. Now, here’s a quintessential colonial clergyman – educated in the old country in St. Augustine’s Missionary College at Canterbury, one could say he was born for a position such as this – a church posting in the centre of a vast and as yet un-”civilized” pocket of colonial presence in the untamed West. In fact, he seemed to revel in the hardship the new outposts threw at him. He wrote in 1878;

“I have [been visiting] three times under difficulties which we get so used to in this country that to write about them would cause the feeling in myself that I was boasting and delighting in vain glory. There is such a great amount of pleasure when one is in full health in the difficulties of travel in a new country that I for one think it capital fun!”

His passion and energy for his work bore much fruit, starting in Yale, Hope and Chilliwack, going on to be Vicar at St. James’, Vancouver which still goes strong today.”

Melanie went on to summarize Ditcham’s career in ministry in the Fraser Valley including the information that following a return to the UK he returned as the Superintendent of the New England Company and secured a site for the St. George’s Indian Residential School in Lytton. “He purchased 696 acres of land in two parcels, and in 1902, the Industrial School for Indian Boys at Lytton opened, with our very own Rev. Ditcham as its first principal – This school would go on to house and ‘educate’ thousands of First Nations children as young as 3 years old and as old as 19… Make no mistake – the Rev. Ditcham was a brave and stalwart missionary who sacrificed much comfort to come to the unfettered West to serve the communities here in the name of Christ. He did some very good work establishing some of our earliest parishes and he also truly believed that educating First Nations children would help to advance them in a growingly settler-controlled culture.

He was also a man who failed to see the face of Christ in the First Nations people he encountered, and instead founded an institution hell-bent on making sure that if any face was to be seen in those of these small children, it would be a mirror image of his own. His tenure at St. George’s was the beginning of 8 decades of cultural genocide. I say this not to disgrace Ditcham or his important role in the history of this parish, but to demonstrate that history is always complex. It is not as black and white as we often want things to be. And the road of reconciliation is equally complex.

Then Melanie went on to share her own story and how her work led her to a new understanding of the world, her own upbringing, her core beliefs and the message of the Gospels. After sharing the very moving and personal account of discoveries made that changed her forever she took a look at the Gospel for the day, Matthew 9: 18, Jesus’ healing of the bleeding woman. “In the midst of that journey towards the resurrection of the girl, a woman interrupts the scene. In her desperation to be healed from a condition that left her not only physically weak and ill, but also ceremonially and spiritually unclean and therefore cast off from society, this woman reaches out her hand to touch just the hem of Jesus’ garment - with a faith that believes that even just the brush of her fingertip on the dusty, scratchily-woven garment will make her whole. What a faith THAT is! Christ heals the woman. Christ raises the girl.

I see a parallel between this story-within-a-story and my own healing, and where we are now in reconciliation with Indigenous peoples. There is the larger story of the “rulers” humbling themselves – the government apologies for the residential schools system, the high-level institutional church apologies for the same, the various institutions and systems realizing their culpability. In the same way that I wonder if the ruler in the story would have worshipped Christ had he not needed something from him, I wonder if the “rulers” in our current story would have humbled themselves had they not been so unequivocally forced to confront the awful Truth that they were in the midst of a systemic Death.”

Melanie Delva does believe that “healing is available for all” but it will not come without the experience and profound awareness of our “brokenness and shame”. As she spoke the final sentence of the penultimate paragraph of her homily there was a reaction in the room; shallow intakes of breath; some shifting on pew cushions, for some there was a slight exhalation as they processed the following words, “We need to pursue reconciliation not because Indigenous people need us to help them, but because we are in need of help.”

Following the sermon, the liturgy continued with the Offertory, Intercession, and the various sections of the old BCP Holy Communion service concluding with the two prayers that most modern Anglicans know, the Prayer of Humble Access and the Prayer of Consecration. At this point the liturgy transformed into a Eucharist certainly not out of place in a modern Anglican church. Placing the Eucharist into the context of the 1918 Administration of the Sacrament of Holy Communion, the Reverend Sovereign wrote this in his leaflet notes, “A century ago, to receive Communion without proper preparation and true repentance was to create a real threat to the church you belonged too. Modern understandings of the Eucharist, and the love of God encourage us to eat and drink precisely because we need the Lord’s sustenance to live holy and healthy lives, physically and spiritually…”

On that cloudy, dark, mid-fall morning in Chilliwack, BC, seventy-five people gathered in an old church to share an experience. What they shared was more than a guided tour of the past, offering a possible reprieve from the sameness of Sunday worship. What they heard and experienced were messages of: healing, hope, compassion, new life, new understanding, but more importantly, the opportunity to gather together as the Body of Christ, and in Melanie’s words in reference to the woman in the Gospel story, “long – for a chance at real Life in the midst of brokenness”.