Historic Crèche on Display at CCC 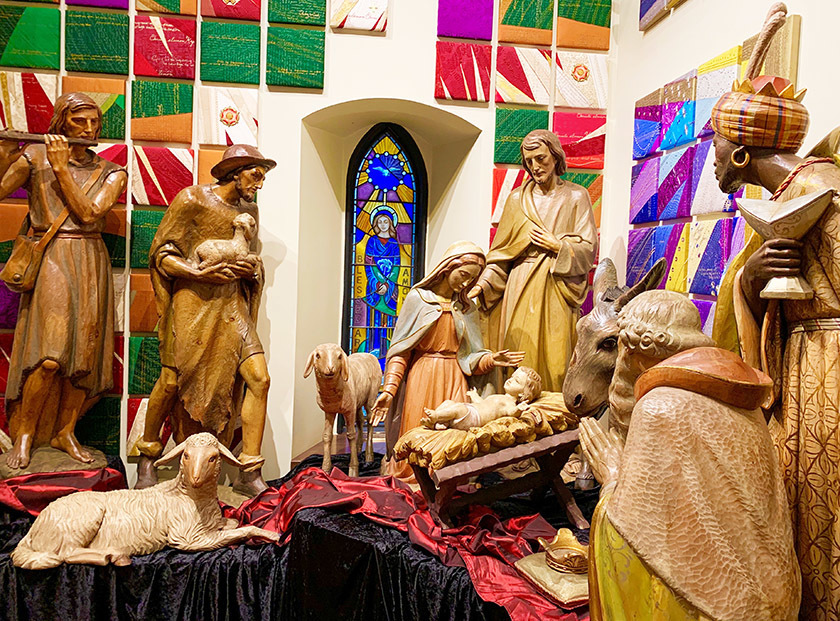 Advent is here and Christians around the world await the arrival of the Christ-child, the Light of the World. A powerful symbol of the season in Vancouver is the display of the crèche at Christ Church Cathedral.

The beautiful olive wood ¾ scale crèche figures, hand-carved, hand-painted and gilded in Italy were a highlight of the famed Vancouver Woodward’s Department Store Christmas windows from 1955 until the early 1990’s. Many of the Woodward’s displays featured moving figures with accompanying soundtrack and lighting but this striking nativity scene was always the centerpiece of the seasonal display.

In 1993, the Hudson’s Bay Company acquired the assets of Woodward’s. Many of the Woodward’s display window pieces were moved to Canada Place to be enjoyed by new generations of Vancouverites at Christmastime, however, The Bay continued the Woodward’s tradition by displaying the nativity scene inside the Seymour street entrance of the downtown store during Advent and Christmas.

In the late fall of 2013, Christ Church Cathedral gratefully accepted the Hudson Bay’s offer of the loan of this wonderful piece of Vancouver’s heritage to display in the church during Christmas and Epiphany of 2013.

In 2019, as has become the custom,  the nativity scene was placed in the West Chancel alcove of Christ Church Cathedral just prior to Advent I, December 1, and diocesan communications’ reporter and photographer, Jane Dittrich took this photo prior to the beginning of the 10:30 Celebration of the Eucharist.

Since 2014, when Epiphany arrives on January 6, the set is moved to the East Chancel gallery and remains displayed there until Candlemas, February 2, 2014, the Christian Feast Day celebrating the presentation of the child Jesus at the temple.

The crèche is available for viewing at Christ Church Cathedral, 690 Burrard Street, weekdays, 10am-4pm and before and after the Sunday liturgies.