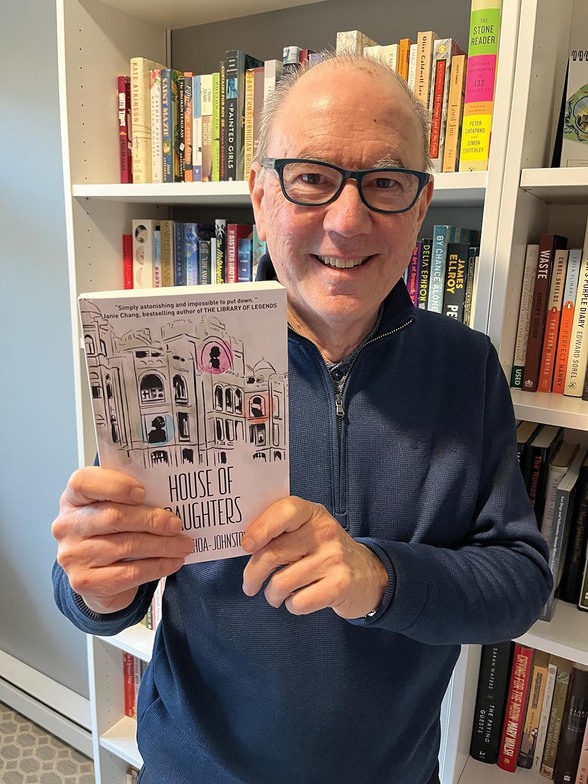 Simon Choa Johnston, ODNW has written a stand-alone sequel to his Globe and Mail bestselling 2016 novel, “ The House of Wives”. The new book’s title, “House of Daughters” will be released  December 6, 2022.

Born and raised in Hong Kong, Simon immigrated to Canada to attend McMaster University where he graduated in 1972. After attending theatre studios in New York, he returned to Canada where he has worked as a playwright, director, and artistic director.

His plays have been seen at the Arts Club Theatre, BC; Gateway Theatre BC, Western Canada Theatre BC; the Belfry Theatre BC, Kaleidoscope Theatre BC; Youtheatre Montreal, Collective Arts Production, Ontario and the Lighthouse Festival, Ontario. Simon was writer-in-residence at the Stratford Shakespeare Festival and was featured at Toronto’s Factory Theatre Cross Currents Festival.

Simon and his wife, Sheila Johnston, ODNW moved to South Surrey in 2014, where they joined the Parish of the Church of the Holy Trinity, White Rock and where Sheila began a new ministry as Parish Administrator of the nearby Anglican church, St. Mark, Ocean Park.

In 2016, Simon was invested into the Order of the Diocese of New Westminster in recognition of his long-time support of his former parish, St. Mary’s, Kerrisdale, and his diocesan leadership that began with his appointment as Chair of Synod Planning in 2014 (through 2019) and his subsequent appointment as Chair of the Local Arrangements Committee for the 2019 General Synod that convened in Vancouver in July of that year.

In anticipation of the release of the new novel, Simon sat down with diocesan communications officer, Randy Murray in mid-November, 2022 for this interview.

Thank you so much for taking the time to speak with me again. The last time we had a conversation like this was March of 2016. A lot has happened in the world. The penultimate question I asked you during that interview almost seven years ago was “What do you foresee in the future for Simon Choa Johnston, novelist? Where do you think this might lead?” And you answered “As long and as arduous as novel writing can be, all I want to do now is write another one. It will be a story about the children of the three characters in House of Wives.” Well, now it’s done. So… please give us a summary of your “House of Wives” experience and how and when you began “House of Daughters” and…whether it was ‘arduous’?

House of Wives became a Globe and Mail bestseller in 2016, which opened a whole new world of book touring. I felt overwhelmed by the generosity of book clubs in British Columbia, and Ontario who kindly invited me to their meetings. I must have done a couple of hundred presentations between 2016 and 2019, in intimate spaces such as people’s homes to lecture halls in colleges such as my alma mater, McMaster University. I also attended the TATA Literature Festival in Bombay as well as several book festivals on the West Coast. Attendees at these events encouraged me to write a sequel. Their comments about the characters in House of Wives, prompted me to wade into the next generation in the House of Daughters. Then, a trip to Hong Kong allowed me to research the 1920s and 1930s in the local archives. A chance meeting with a distant relative gave me the core of the story in House of Daughters. His files, made the writing less arduous but no less challenging.

In that March 2016 interview, I asked you what you wanted people to take with them after they had read the book and you replied, “I had this written on a sheet of paper and stuck to the wall above my computer screen: “Two women compete for the affections of their opium-merchant husband in a tale of friendship, fortune and rivalry in colonial Hong Kong.” Did you pin a sheet of paper on the wall this time?

Yes, this is what it says: “In the 1920s and dirty thirties, a wealthy Jewish-Chinese Matriarch, her daughter and granddaughter confront class, culture and the legacy of a deadly curse.”

Although fiction, your first novel was inspired by real events and personal experiences, with the central characters: Emanuel, Semah and Pearl, real people connected to your life. Emanuel and Pearl are your great-grandparents? Does this connection continue in “House of Daughters”?

What do you think makes a good story?

Three things: a compelling central character, his/her/their goal and how he/she/they overcome the things that stand in the way of achieving their objectives.

The story is set in Hong Kong in the 1920s and 30s. To set the story in the applicable period and place and to avoid anachronism did you find you had to do a lot of research? Did you have help with this part of the project?

The houses described in the book are no longer standing but they exist in my relatives’ memories. I kept many notebooks as I was growing up and referred to them frequently. Also, newspaper accounts in the periodicals section of the HK Library and city archives opened a window into the period. A dear family friend also supplied me with a treasure trove of old photos dating back to the 1920s and 30s along with tantalizing handwritten diaries describing people and incidents.With gratitude, I based much of my story on those sources.

In the form and development of the book did you change your process at all from the days of writing plays and the first novel? If ‘yes’, what were those changes?

The “what” of the narrative is the same, i.e., what is the story about? However, the “how” is very different, i.e., how do you tell the story. A stage play of my novels would require a large cast and different settings. A novel allows me to explore a large canvas in more detail. A stage play is a conversation with 300 or 400 people at a time in a theatre. A novel is an intimate conversation with one person at a time, usually in their home

Do you have a favourite character in “House of Daughters”? And is there a character that you’re glad you don’t know?

That’s like asking if I have a favourite son or daughter. They are each uniquely different, making their own way through life. My job, I think, is to help the reader know why they act the way they do and without judging them.

Many authors from Thomas Wolfe to J.M. Coetzee to Yiyun Li say their writing is autobiographical. What’s your take on that and does that ever come to mind when you are writing?

Oh my, to be mentioned in the same breath as Wolfe, Coetzee and Yiyun Li means I can now go to my rest completely fulfilled. Yes, I draw from my own experiences both lived experience and observed experiences, my own insecurities, and flaws and those I might see in others. I try to ask myself why, I, or people I know behave in the way we do, say the things we say, and live the way we live. I try as best I can to find the funny in situations, although I don’t always succeed.

Did you get much feedback from the readers of “House of Wives”? What kind of things did they say? And did anything that you heard surprise you?

Initially, all the reactions surprised me. House of Wives was about Emanuel Belilios, a wealthy 19th century, Jewish opium oligarch from Calcutta who sold his wares in Hong Kong. He had two wives, Semah also Jewish from India and Pearl Li a local Chinese beauty. The three lived an unusual ménage à trois in a Hong Kong mansion named Kingsclere. Some popular questions were:

What does your family think of your writing?

Mercifully, my family is very supportive of my work. They are like my stealth marketing team, promoting my novel to their book clubs, purchasing copies to give as gifts and recommending them to their children and grandchildren. I have thirty-two cousins scattered around the world. They have been very accepting of my work. Phew!

What was one of the most surprising things you learned in writing this book?

I learned that a writer better love the story he/she/they are writing, because you’re going to have to proof-read the darn thing a million times before publication. It’s a colossal time-suck.

We have supplied links on this post to your website where folks can access links to purchase “House of Daughters”. However, are there any events on the horizon that you are particularly excited about and might include public participation?

Yes, there will be a White Rock/South Surrey launch in late January, and some library readings in March and in the summer. Dates are TBA as public facilities work out the covid protocols that are still operative. My website will be the go-to place for announcements. Readers can also reach me at simoncjohnston@icloud.com if they wish to be on my mailing list.

In 2016, I asked you if your faith informs or impacts your writing and you said, “I’m still try to figure that out?” Well…?”

Still working on it.

What’s next for Simon Choa Johnston the artist?

I’m working on the second half of “House of Mine”. Set in 1967, the novel will be the final installment of the “House of…” trilogy. It will be a fictionalized novel about my experiences as a boy living in Hong Kong during the Chinese cultural revolution.

Here is a link to Simon's website with detailed information about both novels and how to obtain them.