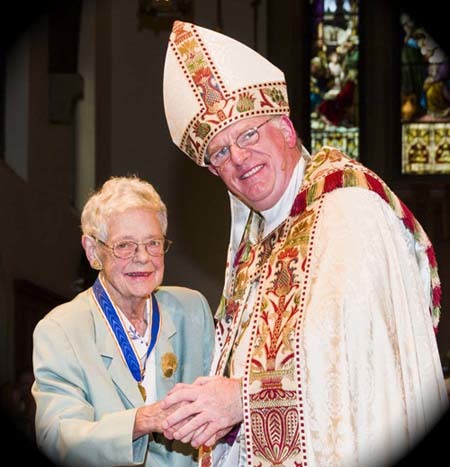 Marilyn Fane, who spent much of her life in dedicated service to her community, her parish and her diocese passed away peacefully, January 22nd, 2013.

She was invested into the Order of the Diocese of New Westminster in 2012 in recognition of her many contributions to mission and ministry.

Marilyn was born in Edmonton and in 1935 moved with her family to Vancouver where she attended St. Margaret’s, Cedar Cottage, Holy Trinity, Vancouver and St. Anne’s, Steveston.
Trained as a youth leader, Marilyn first served as a consultant in the Saskatchewan and British Columbia dioceses. Marilyn received a Scholar of Theology degree from the Anglican Theological College (now VST) in 1963 and in 1964 was hired by the Diocese of New Westminster as a consultant in education and training. She eventually became a full-time employee of the Diocese of New Westminster and continued her career there in the Program department until 1977 when she became Executive Director of Chilliwack  Community Services. She remained in that position until her retirement in 1995.
Upon her arrival in Chilliwack Marilyn became a member of St. Thomas Parish. For the next 35 years she was very active in parish life, serving: on Parish Council, (for many years as Council Chair), as a delegate to Synod, as an intercessor, lay administrator and greeter. Marilyn planned two weekend camps for the Parish of the Fraser Cheam of which St. Thomas was a part and in the 1990’s she chaired the Liturgy Committee and led Bible Study groups.
Marilyn was a very active member of Camp Artaban, leading courses and directing camp programs. She was also a founding member of Sorrento Centre.
Following her retirement, Marilyn was elected to the Board of the University of the Fraser Valley, she was a member of the Chilliwack Social Research and Planning Council, and the Program Chair of Elder College. In 1999, Marilyn was chosen by the Soroptimist Club, “Woman of the Year” for Chilliwack. She received the Paul Harris Fellow Award from the Rotary Club of Chilliwack and the Canada 125 Medal presented to her by the City of Chilliwack.
Please keep the community of St. Thomas and all those who were close to Marilyn in your thoughts and prayers.
Marilyn Fane's Celebration of Life Service will be on Saturday Feb. 9th at 3pm at St. Thomas Church, Chilliwack.


Many thanks to the Rev. Jennifer Burgoyne for supplying much of the information in this article.