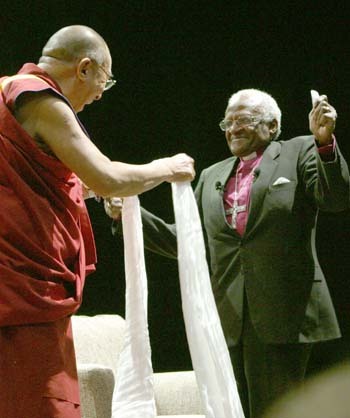 These are some reflections (contradictions, paradoxes and conundrums) arising from attending the roundtable dialogue "Balancing Educating the Mind with Educating the Heart" with His Holiness the XIV Dalai Lama, Archbishop Desmond Tutu, Professor Shirin Ebadi, Rabbi Zalman Schachter-Shaomi, and Dr. Jo-ann Archibald on April 20 at the University of BC:

All five came from communities in duress, whether due to human rights violations within or aggression without which has forced so many into exile from their traditional lands...Tibet, South Africa, Iran, Israel, First Nations. All know violence and brutality first-hand, but refuse to respond with an eye for an eye, a tooth for a tooth.

It is easier to see the justice in struggles far from home, than to turn and deal justly with those within one's society who have been denied their rights. I will remember most fondly the laughter that rang through the Chan Centre over and over.

I am especially pleased that Dr. Jo-ann Archibald participated in the Dialogue. An eminent educator, she has worked tirelessly with First Nations students and communities preparing curricula with indigenous perspectives, including Fisheries, Forestry and Healthcare. She has also been instrumental in building the UBC Longhouse for Learning on First Nations needs and fundamental principles of Respect, Relevance, Responsibility and Reciprocity.

For a brief moment, everyone at the Chan held hands and contemplated how intellect and heart could be brought together in community. This small act of Dr. Archibald's stimulated Professor Shirin Ebadi to speak of the whirling dervishes in her own tradition — the mystics of Islam who bring heaven and earth into harmony through their dancing.

"We need Secular Ethics for Humanity — religion is not necessary and neither is a God!", proclaimed the Dalai Lama. Bishop Tutu retorted, "So WHO do you blame?" After a moment the two friends dissolved in laughter.

Both the Dalai Lama and Bishop Tutu chided North Americans for opulent lifestyles that waste resources when children are starving, without education or adequate healthcare in so many countries. Both asked Canadians to cut their consumption, to be part of the solution and not the problem.

The Dalai Lama's greatest challenge to Canadians might be his certainty that our fundamental human nature is good and that only compassion and reason will overcome injustice.

Rabbi Zalman Schachter-Shaomi was a delight. An old friend of the Dalai Lama's, he was a member of a delegation of American Rabbis who met with the Dalai Lama in Dharmasala in the 1980s, to discuss how a people can maintain their culture and religion over time, when in exile. He teased his colleagues and did a Star Wars "mind-meld" with the young student who directed her question to him. He told her he had nothing to say, because she had answers within her. He was right.

Bishop Michael Ingham was a very able facilitator and time-keeper for the Dialogue. He must have felt comfort in this discussion which centred on tolerance, respect and loving relationships.

I want to thank Vancouver for the opportunity and privilege of attending this event. It was a marvelous community success and a great gift. For a few short days we were blessed by the courage, compassion and wisdom of some remarkable individuals, who suggested that we can, if we choose, create a world of peace, prosperity, and justice for all.

UBC has archived video of this session at www.dalailamavancouver.org