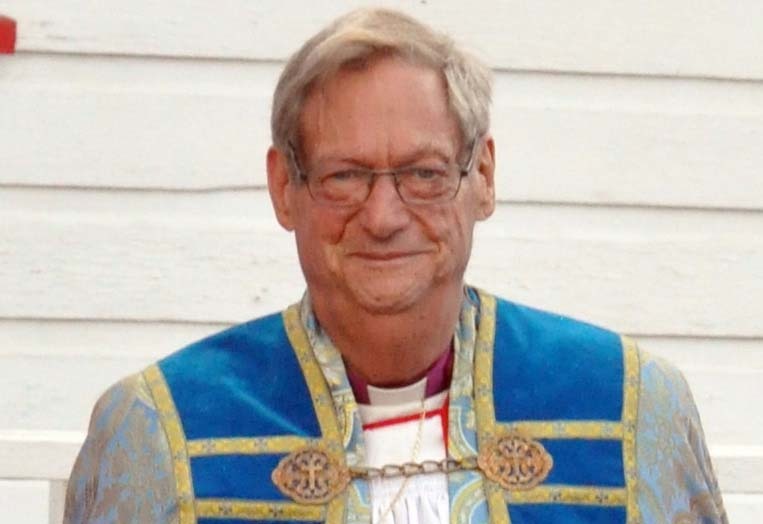 A bishop, theological educator, cathedral dean, and champion of the ministry of the laity, Jim Cruickshank died peacefully on Wednesday December 30, 2015 in his 80th year.

Bishop Cruickshank came to faith and formed his lifelong commitment to the Anglican Church while growing up in Prince George, a town in British Columbia’s Central Interior. He was baptized and confirmed at St. Michael and All Angels Church in Prince George, a church in the former Diocese of Cariboo, the diocese where he would be bishop. He was educated at the University of Minnesota, the College of Emmanuel and St. Chad in Saskatoon, and the University of Chicago. He was ordained deacon in 1962 and priest in 1963 in the diocese of Cariboo.

From 1962 to1965 Jim served as Curate and Vicar of the Upper Fraser Mission (All Saints, McBride with Valemount). In 1965 he became the founding Director of the Sorrento Centre and was instrumental in its development through until 1973. He then moved to Vancouver School of Theology serving first as Director of Continuing Education and later as Vice Principal and Professor of Pastoral Theology. In 1983 he was appointed Dean and Rector of Christ Church Cathedral, Vancouver.

In 1992 Jim was elected as the 7th Bishop of Cariboo. In his retirement he served as an
Honorary Assistant St. Mary, Kerrisdale, continued to teach at VST, and in his last years was a faithful parishioner at Christ Church Cathedral Vancouver.

Jim’s wisdom, energy, and theological vision influenced generations of Anglican clergy and lay leaders. He was an early and passionate advocate of a church inclusive of women and men in leadership and also for the affirmation of the gifts of the LGBT community. As Bishop of Cariboo he engaged with indigenous communities, offering an apology for the abuses in the Residential School system and seeking to promote indigenous leadership within the diocese. Jim engaged lay and clergy leaders with a vision of an inclusive church committed to a world of peace through justice for all; and inspired many young people to work towards making this world a reality.

A live, streaming, video/audio of the service will be available, please click this link.

Image: Bishop Jim at the Centennial Celebration of the Diocese of Cariboo, October 19, 2014.

A full 300 dpi version of the photo is downloadable below

Link to the February 2, 2023 E-News First Clergy Day of 2023 A Message from L'Arche Greater Vancouver regarding the Study Commission findings on Jean Vanier