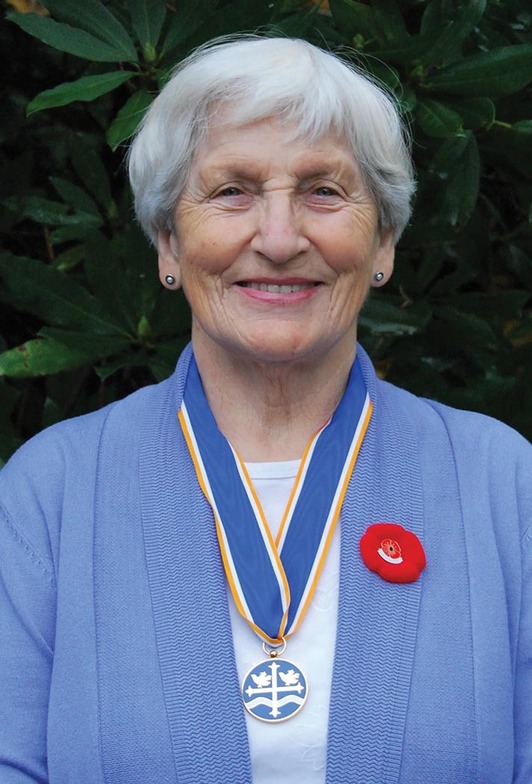 Jill Hanney, long-term member of St. Clement’s, Lynn Valley died peacefully at home on March 18, 2021, surrounded by immediate family, after living with dementia for the past few years.

Ken and Jill were introduced after WWII at a tennis club in London, when Ken needed a partner for doubles - and they remained partners for over 70 years.  After their marriage in 1951, they emigrated to Canada where Ken worked as a mining engineer, including in the North.  Their four daughters were born in Canada and UK.

In 1971, the Hanneys moved to Upper Lynn Valley and started attending St. Clement’s. Jill raised the family, was involved in Guiding, and worked as support staff at Capilano College (now Cap U), all the while keeping an eye on her widowed father in the UK until he came to live with her and Ken.  She was an active grandmother to her granddaughters living locally, and stayed in close touch with the daughters who moved away, spending summers with the North Shore and Calgary branches of the family in Kelowna.

The roles Jill has played at St. Clement’s range from Warden, Synod Delegate and member of Parish Council, to Eucharistic administrator, reader, choir member, leader of the prayers and greeter.  When St. Clement’s sponsored a Vietnamese refugee family in the late ‘70’s, Jill worked tirelessly to make them feel at home and helped them to thrive.  She took part in many Bible studies and small groups, and for many years, led Senior Link, gathering the group monthly for Bible study, lunch and conversation.  In 2014, Jill was awarded the Order of the Diocese of New Westminster, the third member of St. Clement’s to be so recognized (she was preceded by Ken and followed by their daughter Sara).

For 40 years, Jill has been involved in parish leadership at St. Clement’s, in administration, worship leadership, and as a wonderfully welcoming presence to newcomers – old and young. Her service to the wider community includes volunteering for Sharing Abundance community meals, refugee support, and planning the annual ecumenical World Day of Prayer.

Jill counted her blessings, and even when affected by memory loss, was unfailingly welcoming and kind.  A memory many of us have is of seeing Jill and Ken at Lynn Valley Centre, Ken patiently waiting while Jill chatted to one of her many acquaintances.

Jill’s ashes will be interred in the Memorial Garden, and, when it is possible to gather freely again, there will be a Service of Thanksgiving for her long life, lived in the service of God, her family, St. Clement’s and the wider community.

We will miss Jill; we are blessed by having known her.  We pray for Ken and Sara and the rest of the family, that they may know the comfort of God’s love in their grief.

May Jill rest in peace and rise in glory.