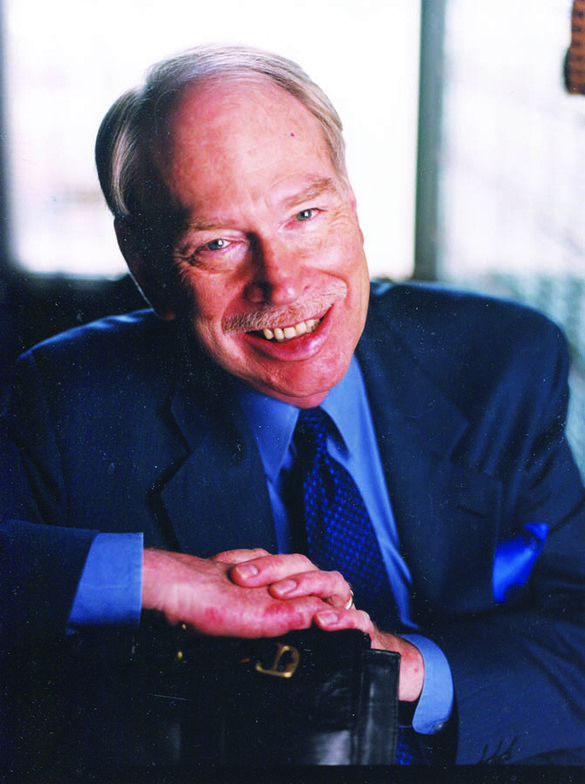 “What’s that you’ve got there?” I asked, pointing to the oversized hi-ball style glass containing an icy multi-coloured liquid cradled in the large hand of a tall rangy well-dressed man who was taking me and some of our friends out for a Christmas lunch.

“It’s a Negroni,” he said. “The quality of the food at an Italian restaurant can often be ascertained by the character and depth of the Negroni.”

“Sounds good!” I ordered one, which was in fact my first.

The person who I am referring to was my friend, and his name -  John Lyndon Grove, ODNW, a brilliant writer, broadcaster, journalist, creative director, and interviewer. He was a loving husband, father, brother, grandfather, great grandfather, uncle and also a thoughtful, faithful and committed Christian who selflessly shared his great talent and his huge heart to the benefit of the Anglican Church and its lay and clergy membership for his entire life.

Lyndon died peacefully at home on Friday, August 21, 2020 with family present. His children took turns holding his hands and reading him Compline throughout the night

(A biography assembled by Lyndon’s family to be printed in the order of service bulletin for the celebration of his life is linked here.)

In 2012, he was invested into the Order of the Diocese of New Westminster and his brief citation read:

Mr. John Lyndon Grove - St. Margaret of Scotland
Lyndon has served St. Margaret of Scotland, Christ the King and the former St. Andrew’s in Burnaby and he is the writer of “Pacific Pilgrims” the diocesan centennial history, published in 1979. Lyndon has served on both diocesan and parish committees and he continues to be a true blessing to our church. Amongst his huge list of accomplishments, from 1976-1984, Lyndon Grove was the Editor of Topic, the publication of the Diocese of New Westminster. Serving at the “pleasure of the Archbishop” (and in this case it was really at the “command” of Archbishop David Somerville) Lyndon, building on the great work of his dear friend Conrad Guelke, ODNW shredded the concept of a diocesan newsletter and spent his eight plus years (it is important to note that Lyndon’s contributions to Topic and diocesan communications continued up until 2019) pursuing substantial stories and controversial subjects during a time when the Anglican Church was experiencing tremendous change. He was the last “volunteer” editor to hold the office as it was and is unlikely that another volunteer with that level of skill and commitment could ever follow Lyndon. We were so glad to be able to complete in December 2019, and subsequently publish the Topic 50th anniversary issue in February of 2020, as this was a project that Lyndon although well into his 80s had championed with tremendous energy. His planning with Conrad of the overall project and his contributions to the actual publication were the backbone of the piece. “Taking Chances” the article that he wrote about his time as editor was titled perfectly. (Here is a link, the article begins on page 9)

When I began here as Communications Officer and Editor of Topic in 2009, he contacted me and having much in common and a similar outlook on a number of topics, we became friends. We didn’t go to events together very often (I would frequently see him at Christ Church Cathedral) nor did we talk on the phone much (not to say that there weren't some memorable phone conversations) but we did communicate through email and the arrival of a Lyndon Grove email in my inbox would brighten my day, often inspired me and always made me think more deeply about my role as a Christian communicator. He always addressed me in the salutation as “Esteemed Editor” and I always addressed him as “Sensei” (although now I must admit that the password I'd created for him to allow access to diocesan comms posts online was borrowed from his usual self-description, "inkstainedwretch"). He had an open invitation from me to contribute to Topic which he did periodically for the next 10 years.  We shared a love of irony, good food, jazz (be-bop and post-bop mostly), the CFL (when the league switched a few years ago to airing three games on a Saturday we’d tease each other about having square eyes from 10 hours of CFL), theatre, literature (from comic books to pulp detective novels to Hemingway, Dickens and beyond), memorabilia and both of us had worked in radio. He would sometimes when inspired to write send me rich and juicy stories of his career in broadcasting and advertising which he would mark "for you, not for publication."

It is fitting that the news of his death was communicated to me by Canon Herbert O’Driscoll who was Rector of Christ Church Cathedral, Vancouver and Dean of the Diocese of New Westminster during Topic’s first decade and a dear friend of Lyndon.

In the email thread that I received that announced the sad news, Canon O’Driscoll had written this to his friend Ian,

"For both of us this (Lyndon’s death) is what I call a Heraclitus moment. First thought that came was to realize that he was one of God's magnificent jesters.  If anyone had said this to him he would of course have dismissed it, well, with a jest, and would have refused to believe it for a moment.

A moment with CSL (Lewis), from Letters to Malcolm ch 22. comes to mind."

"Then the new earth and sky, the same yet not the same as these,
will rise in us as we have risen in Christ. And once again, after who
knows what aeons of the silence and the dark, the birds will sing
and the waters flow, and lights and shadows move across the hills,
and the faces of our friends laugh upon us with amazed recognition.

Guesses of course, only guesses. If they are not true, something better will be, for we know that we shall be made like Him, for we will see Him as He is.” On Monday, August 24, I sat at the computer, went through Topic files, found pieces that he’d written from 2010 to 2019 and created a special file.

I am pretty sure that whenever I dine in an Italian restaurant (well one that has positioned itself as a place that has mastered the cuisine as opposed to Me n’ Ed’s Pizza {which I do highly recommend, and I must admit I don’t know if they serve Negronis}) I will continue to order a Negroni. Not only because it is the perfect beginning to an Italian dinner but because I will always want to test my friend’s statement, which for the record so far is always accurate. I will order one in his memory and I will remember him and I will smile. “Saluti!”

A celebration of Lyndon’s life in the form of an Anglican Requiem Mass took place at Christ Church Cathedral, Saturday, August 29. Many of his family were in attendance along with approximately 20 friends and admirers. Of course, in non-COVID-19 times this full Funeral Eucharist would've had a very large congregation.

The Celebrant was the Reverend Marnie Peterson and the Very Reverend Peter Elliott returning to Christ Church Cathedral for the first time since his retirement September 30, 2019, was the preacher.

Lyndon's friends and family offered readings and remembrances, a physically distanced SATB quartet composed of members of Cathedral Choir led the music in worship under the guidance of the Cathedral's Organist and Director of Music, Rupert Lang, and a jazz trio; saxophone, piano and bass played a number of Lyndon's favourites from Rogers and Hart to Charlie Parker. The postlude was a wonderful version of Bill Evans' 1961 composition, "Waltz for Debby".

Prior to sharing the selected reading from the epilogue of Shakespeare's The Tempest, Lyndon's friend, Ian Alexander had this to say about his long time friend:

“He was quietly spiritual, gravely courtly, and very, very funny.  He was a role model of good manners, courtesy, generosity, and genuine other-centeredness.”