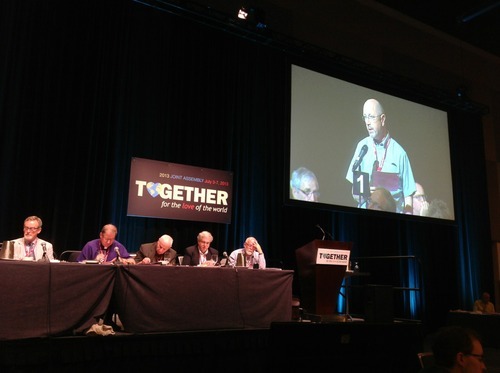 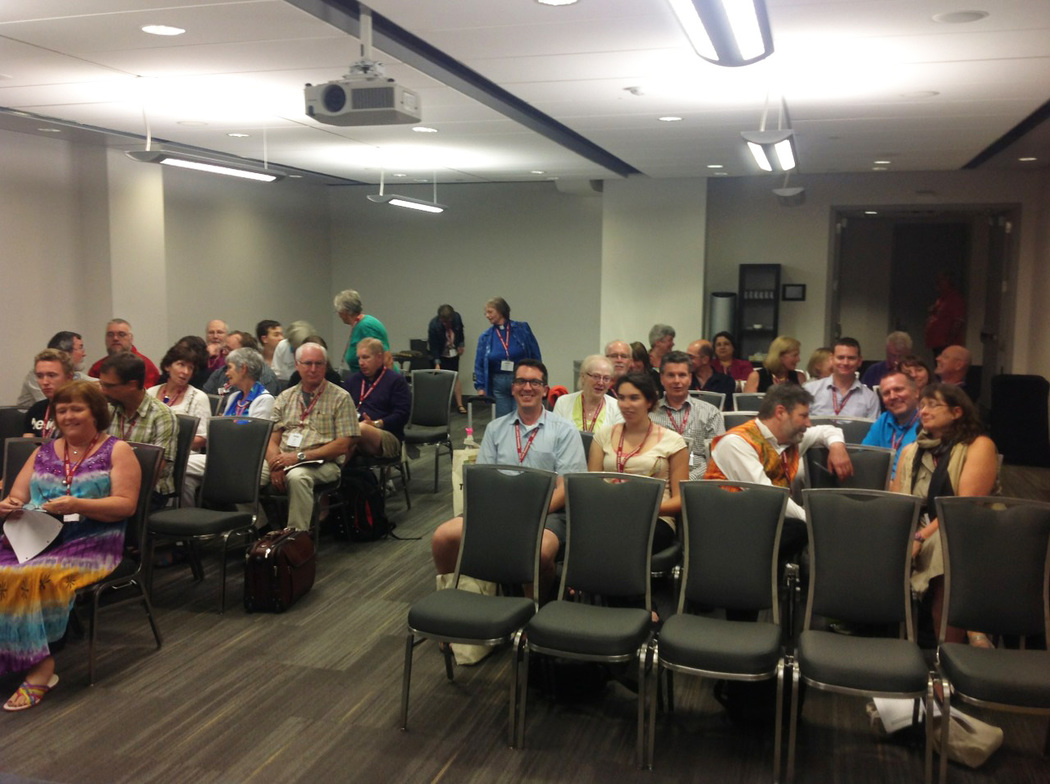 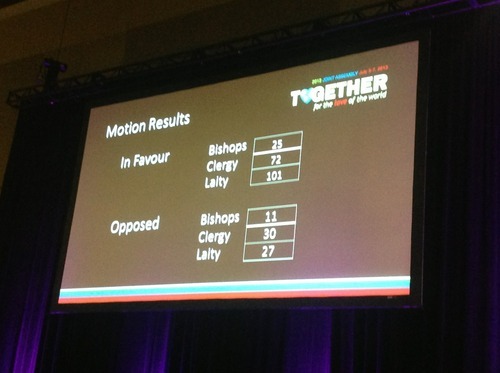 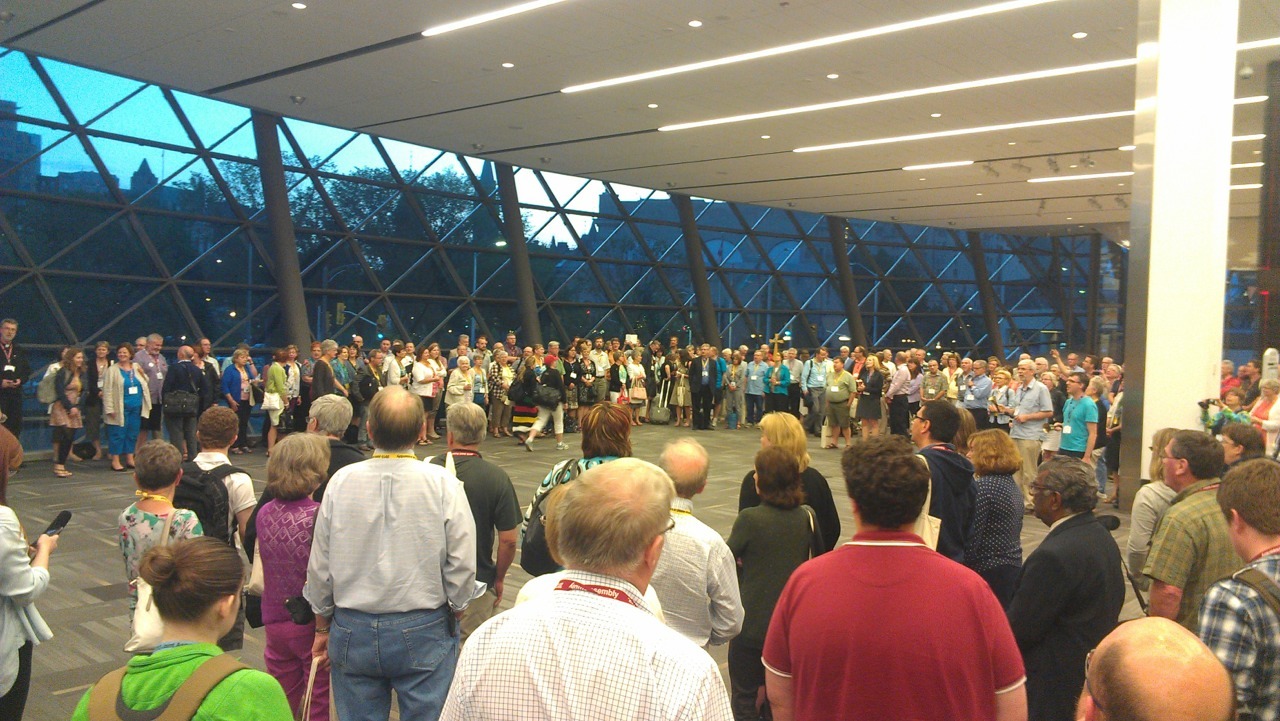 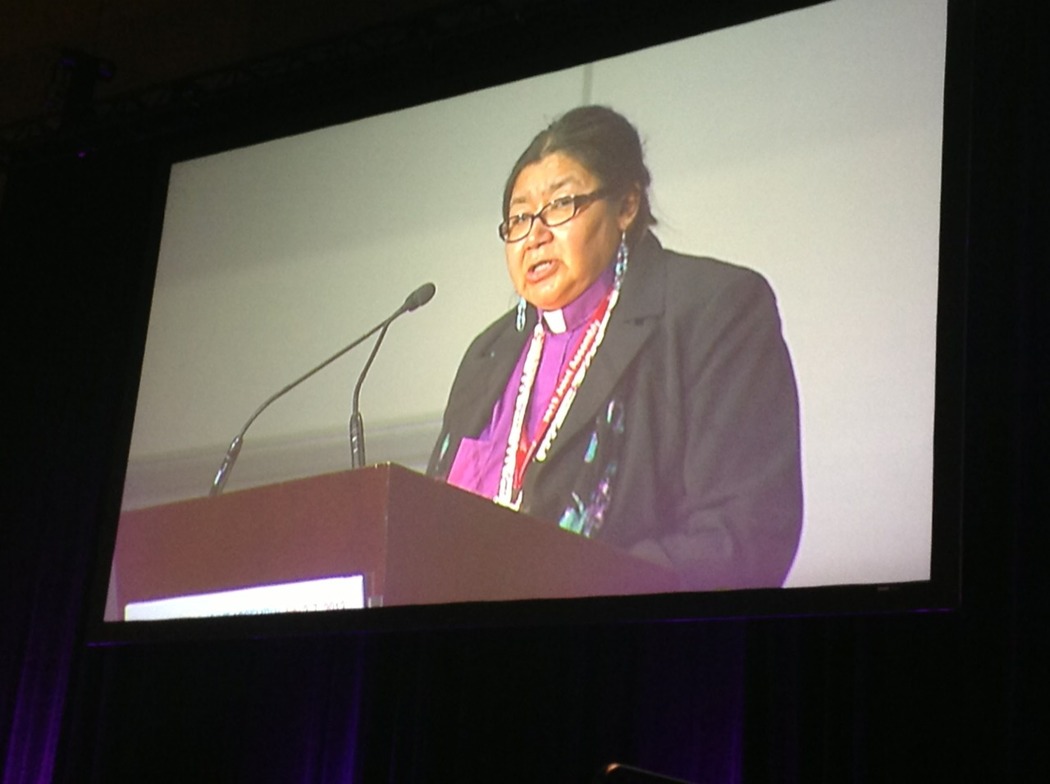 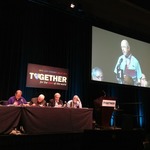 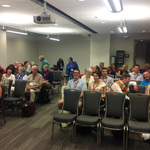 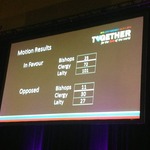 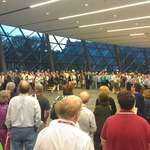 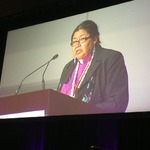 It was a hot and muggy week in Ottawa, July 3-7th, 2013, as hundreds of delegates representing churches from across Canada began to descend upon our nation’s capital. A total of 505 delegates from the Anglican Church of Canada (ACC) and Evangelical Lutheran Church in Canada (ELCIC) met together in a Joint Assembly (JA) for the first time since they joined in full communion in 2001. At that time, the Waterloo Declaration was passed, representing “the fruit of almost twenty years of Canadian dialogue and experience” and among other things, allowed both churches to fully recognize the ordered ministries of the other. It was already a huge shift for the ACC. In past years, “General Synod” (GS) had been held over a course of at least 7 days. This years’ Joint Assembly was made up of 4 days – with a total of approximately 1.5 days’ worth of time for General Synod (ACC) business. That said, they were still long days. Delegates were expected to be in their seats for 8:30am, and evening prayer began anywhere from 9-9:30pm.


Day 3 dawned with ACC and ELCIC delegates once again together as JA. Several greetings were given to the Assembly, including a moving greeting from Rev. Canon Jonas Allooloo who described the 34 year process of translating the Bible into Inuktitut! Delegates witnessed an “interview” with the heads of both Anglican and Lutheran relief organizations and learned more about what they do, and some of the youth involved as well. JA then moved to consider and pass the resolution on homelessness, affordable housing and responsible resource extraction. DNW delegate, Glen Mitchell made a very strong and moving statement for the resolution, calling JA to be as brave as those he had met in his travels to El Salvador, and to stand in solidarity with them.

After lunch, JA once again split and GS of the ACC once again convened. GS heard reports from Faith, Worship and Ministry as well as the Governance Working Group who were speaking to the resolution regarding a new formula to be used for the election of members to GS. The new formula would change from a system of delegation numbers based on the number of paid clergy to delegations based on Sunday attendance at churches. There was much debate on the issue, with one of the points being that even if the number of clergy and lay delegates changed, the one thing the resolution did not address was the fact that some dioceses have many more bishops than others – changing the numbers of delegations in a different way. Bishop Michael spoke for the resolution, saying; "Size and wealth should play no role in our deliberations…the only way to change, is to change". The vote was done by orders (Bishops, clergy and laity) and passed.
The afternoon became no less heavy as motions on the Anglican Covenant and Peace and Justice in Palestine and Israel were presented. Both were hotly contested, but none more so than the Palestine/Israel resolution. Although, on one hand it was stated that unlike many other motions and processes, this one is supporting a document that has come from multiple parties involved, it was also pointed out that there are many areas of the world that are in conflict and the General Synod does not get involved. Dean Peter Elliott introduced an amendment to the original motion which was eventually defeated and the original motion, with a “friendly amendment” was eventually passed by 73%. So, too was the resolution regarding further study into the Anglican Covenant carried, despite one claim that it is “trying to put the toothpaste back in the tube with a spatula”.
DNW Business Administrator, Rob Dickson in his role as Chair of the GS Finance Committee then presented the budget, which was passed without a single question or comment. The floor was then given to the Council of the North, who expressed their gratitude to the whole church for their generous support. New ways to engage ministry and mission are realities thanks to the support from the apportionment shares from dioceses across Canada.
The last full day of the Joint Assembly began with delegates walking to Parliament Hill and witnessing to the need and right for clean water, as planned by the youth delegates from both denominations. The rest of the day was spent entirely as General Synod. After a resolution on “creation care” and an addition to the baptismal covenant regarding the safeguarding of creation was passed, the Synod moved to look at Resolution C003. This resolution would “direct the Council of General Synod to prepare and present a motion at General Synod 2016 to change Canon XXI on Marriage to allow the marriage of same sex couples in the same way as opposite sex couples”. The resolution was spoken for and against, and at one point, an amendment was proposed (and defeated) which included a typo that changed “same-sex” to “sane-sex” which provided the Synod with a much-needed chuckle! The motion was eventually carried, and due to some procedural problems, was voted on again by houses (bishops, clergy, laity) and passed once again.

Delegates who attended the closing banquet on Saturday evening were treated to a lovely meal and a stellar view of the sunset behind the Ottawa skyline, though perhaps “Closing Banquet” was a misnomer, as the JA once again convened to hear closing remarks from Dr. Duraisingh who provided some feedback on our JA experiences. Organizer the Very Reverend Peter Wall, concluded by saying; “On Tuesday we came together for the love of the world. Today we ARE together for the love of the world.” The Assembly officially concluded with a closing worship service which wrapped up with the Inukshuk, which had been disassembled at the opening worship, being re-built in its original form – Together: for the love of the world.