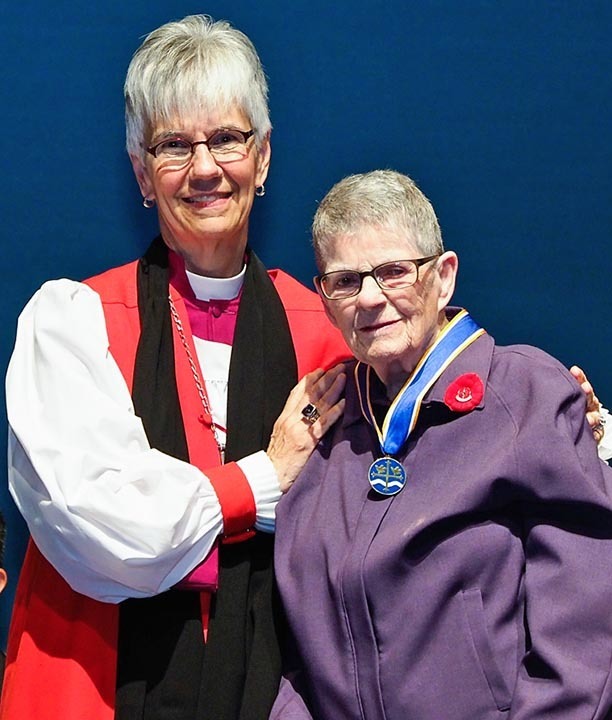 Many thanks to Laura Godwin's youngest daughter Sheila for providing this In Memoriam piece.

What can one say about the indomitably spirited Laura Godwin?

Through her dad, Laura learned where the real power came from (she'd lost her mother to Scarlet fever when she was very young). That power came from her father’s faith and her father taught Laura early on that God was her true Father.

The family attended St. Nicholas Anglican Church, built in 1912 on Triumph Street in the Heights. Laura and her siblings were baptized and raised at St Nicholas. She had lost her sister, Ruth, when she was 7, but had her brother and best friend John as a loving companion. After her dad remarried she added two brothers David and Edmund (Teddy) to her family. She ended up living with her Aunts for awhile after they came along.

Even though Laura was born in a simpler time, life wasn’t always easy for folks living during the1920s-1950s.
They faced a changing way of life with new technologies, poverty, troubling times like the Great Depression, and World War II (we can draw some parallels here). Her resilience and faith kept her pure of heart sustaining her through some very difficult times such as these.

After the War, during which she'd served in the Air Force, she met Frank Godwin and they married and settled in Vancouver. Frank had been previously married with two lovely girls and a week after their marriage, the girls
came to live with them. Laura, instantly became a mother. Not having had a mother growing up, this didn’t stop her from being the giving person and great mother figure she was to become, thus proving of who she really was deep down.

Eventually the girls went back to live with their mother. This left a great longing in Laura to have her own children as she missed Marge and Geri very much! Frank had said he didn’t want to have any more kids, but a few years after they were married, Laura was happy to learn she was to be blessed
with the arrival of their daughter, Jean. Three years after Jeannie was born, along came daughter #4, Sheila.

Life fell into routine and the family moved from Vancouver to Coquitlam. The years flew by, the children grew and went on to their own lives. Retirement was there before Frank and Laura knew it. Sadly, only a short time into retirement, Frank passed away. Laura suddenly found herself alone after 38 years of marriage.

Now what, she may have asked? She didn’t have to wait long for the answer. Sheila and her husband Kevin invited Laura to come to live with them. A suitable house with a suite was not to be found so the idea was to
make a bigger version of the old family home. And a home it was, and for next 28 years, and two grandchildren later, they all lived and loved together. Laura helped to raise all 4 of her grandchildren, Katie and Stephanie, Eliza and Ben. As the children grew, she filled her hours, staying busy until the age of 92 by bowling with friends, aquacizing, helping with the Altar Guild, the food bank and many other activities at Christ the King (the name of the parish prior to St. Timothy's with her best friend Donnie. Those two ladies together or apart, Energizer bunnies! Her health didn’t always cooperate with her tenacity and the last while,
she was sidelined, but content to remain in her home until the age of 96.

Now, Kevin and Sheila, and all of us are left with a “Laura sized hole” in our hearts that will never be filled.
Laura was a genuine and caring woman who loved others and gave of herself so generously and unselfishly.

Here are some photos and an Ode from brother Ted. Laura Godwin was invested into the Order of the Diocese of New Westminster, November 3, of 2018. Her Citation reads as follows:

Laura followed her parents’ footsteps into active ministry at St Nicolas parish in Burnaby. Over the years, she has embraced many jobs in the parish-Treasurer, Altar Guild, sidesperson, collection counter, assisting with Home Communions, taking part in the parish Phone Tree, supplying the kitchen for Coffee Hour, and becoming a founding St Timothy Host for the Food Bank.  Her willingness to embrace new ideas and new ways of doing things make her an incredibly valuable member of the parish of St Timothy.

Laura is invested into the ODNW and congratulated by Archbishop Skelton. November 3, 2018.