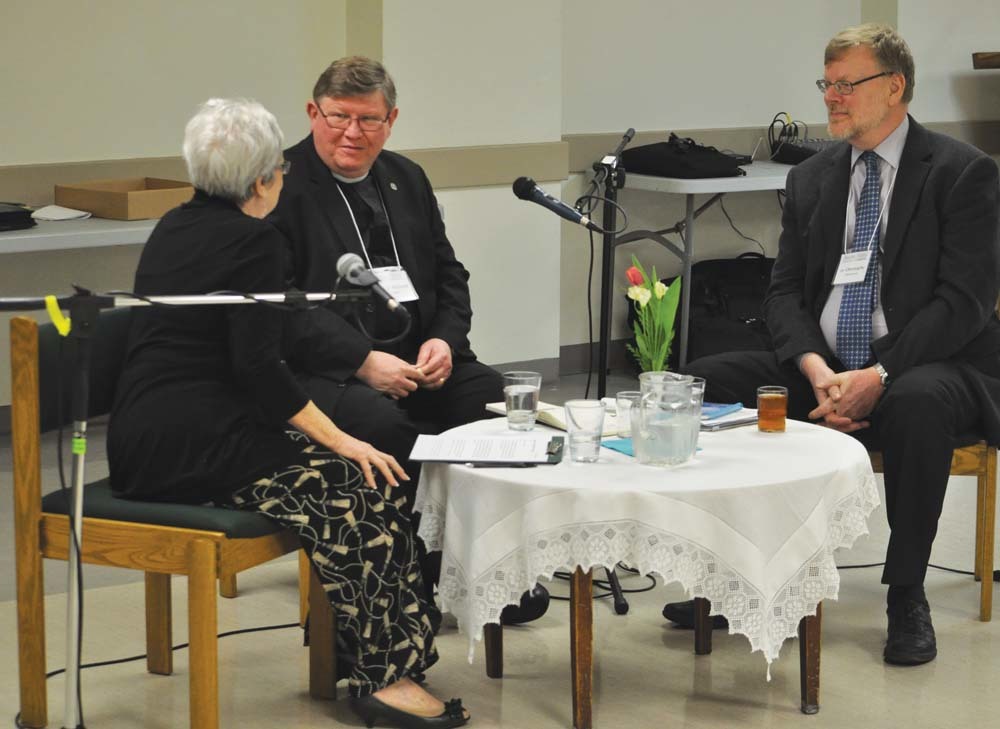 The second of three in a series of Anglican-Roman Catholic Dialogues will be held on Sunday afternoon, March 23 at Holy Trinity Cathedral in New Westminster. Organizers were overwhelmed by the favourable response to the first event which took place at St. Helen's Roman Catholic Church in January when 100 people answered the invitation to "Meet Your Relatives."


The dialogue is a joint initiative of the Anglican Ecumenical and Multi-faith Unit, chaired by The Venerable Grant Rodgers, and the Roman Catholic Archdiocese of Vancouver Ecumenical and Interfaith Relations Committee, which is coordinated by Marjeta Bobnar.

Once again the program will feature a conversation between two theologians: the Rev. Dr. Richard Leggett, Rector of St. Faith's Anglican Parish, and Professor Emeritus of Liturgical Studies at the Vancouver School of Theology - a long time contributor to ecumenical and interfaith relations and Christophe Potworowski, a Professor of Theology at Redeemer Pacific College. Dr. Potworowski held the Kennedy Smith Chair in Catholic Studies at McGill University and was President of Newman Theological College in Edmonton before taking his current position

When asked about topics of conversation, Dr. Potworowski mentioned that people seemed keenly interested in talking about some of the "differences" in the two traditions. He added, "I think avoiding talking about our differences is avoiding the elephant in the room. However, we can’t really do anything about resolving the issues; that is not up to us. The question is, how can we learn to live with them better? One example we will address on March 23 is the place of the Eucharist in Roman Catholic/Anglican relations."

Dr. Leggett agreed. “Dialogue motivated by spiritual curiosity and a desire to gain understanding bears ecumenical fruit. We recognize differences but focus on what unites us. Differences and divisions are not, by necessity, synonymous.We talked about unity and uniformity during our conversation in January. Uniformity is not the goal.”

"One of the stated objectives is to provide an opportunity to listen to the wisdom of our various voices," said Anne Larochelle, a member of EMU and one of the organizers of the series. "Honouring each other as members of the Body of Christ, while respecting the uniqueness inherent to our traditions, we celebrate the oneness that exists between us by virtue of our baptism. From there, the possibility exists to grow together in that very oneness of faith and to explore ways to serve our communities together."

The afternoon will also include a short liturgy, small group dialogue, and refreshments.