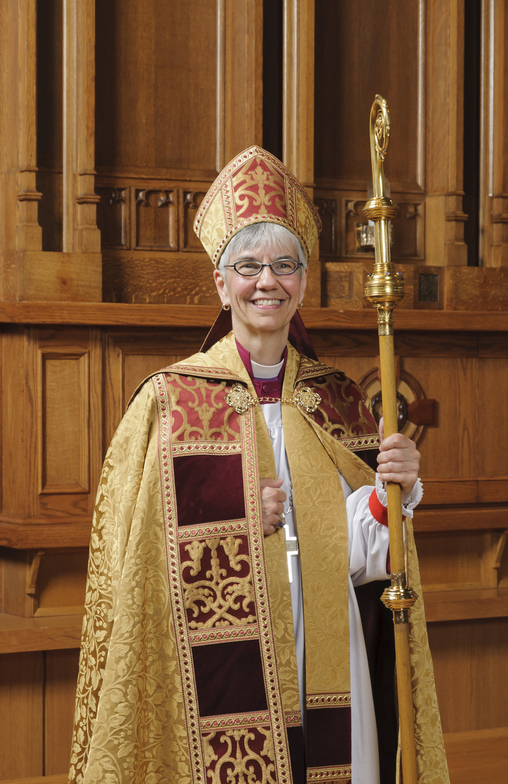 Archbishop of the Ecclesiastical Province of BC and Yukon on the First Ballot, May 12, 2018

Melissa M. Skelton, Bishop of the Diocese of New Westminster was elected Metropolitan of the Ecclesiastical Province of BC and Yukon on the first ballot at 9:40am, Saturday, May 12, 2018. That office comes with the honorific, "Archbishop".

Archbishop Skelton is the first woman to be elected an Archbishop in the Anglican Church of Canada and the second woman in the Anglican Communion with the title Archbishop. The Most Reverend Kay Maree Goldsworthy was elected Archbishop of Perth in the Anglican Province of Western Australia through a similar but broader process to the Electoral College method used by the Ecclesiastical Province of BC/Yukon. Archbishop Goldsworthy was installed Feb. 10, 2018. The Most Reverend Katherine Jefferts Schori was elected June 18, 2006 to a ten year term as Presiding Bishop (Primate) of The Episcopal Church but that office does not come with the title, "Archbishop"

The Ecclesiastical Province of BC and Yukon is one of four Provinces that comprise the Anglican Church of Canada and is made up of six dioceses:

Twenty-one of the twenty-four members (which includes the six bishops of the Provincial House of Bishops) of the Provincial Electoral College were present via telephone conference electronic voting to cast their ballots. This vote was historic not only because the first woman was elected Archbishop it was also the first election held entirely by electronic means. Three members of the Provincial House of Bishops: the Right Reverends: Logan McMenamie (BC). Larry Robertson (Yukon) and Melissa Skelton (New Westminster) had previously agreed to stand for election.

Archbishop Melissa Skelton will replace the Right Reverend John Privett, currently Bishop of the Diocese of Kootenay who had resigned as Metropolitan effective April 30, 2018, and will subsequently complete his ministry as diocesan bishop May 31, 2018.

When asked for reaction about this historic election, Archbishop Skelton said:

"I’m thrilled and deeply grateful for the support of so many in this process: the Provincial House of Bishops, Executive Council members, and those who worked diligently to create the electronic/phone balloting process that we used today. Succeeding Archbishop John Privett is a humbling task. My hope and conviction is that we’re now embarking on a time of increasing cooperation and purpose in the life of our Province that will build on Archbishop Privett’s good work over the past 9 years.

About being the first woman Metropolitan in the Anglican Church of Canada, all that I can say is thanks be to God for the privilege."

The primary ministry of the new Archbishop and Metropolitan will be to continue as diocesan bishop in her diocese, the Diocese of New Westminster. Beyond that ongoing diocesan ministry, providing pastoral care to the bishops of the ecclesiastical province is at the heart of the added archiepiscopal ministry. Fostering unity and harmony within the ecclesiastical province is another. And in conjunction with the other three provincial archbishops and metropolitans, assisting the Most Reverend Fred Hiltz, Primate of the Anglican Church of Canada is an important function.

At 6:40am, Tuesday, May 15 Archbishop Skelton was interviewed on CBC Radio One's local morning show, The Early Edition and said the following in response to host Stephen Quinn's question about how she arrived at this milestone event in her life and ministry:

"I had a career in college teaching – I taught college English – and then went and got an MBA and was in the business world for a while. Actually, I did that while also doing a masters in divinity, so I was drawn really in two directions at once, and kind of meandered between the two for a while, and then settled much more strongly on the church side, and haven’t really looked back on that. . . .
I don’t see the world as split into portions or unrelated parts. I really see it in a holistic way, and so, for me, everything that has been a part of my story has brought me to today. . .

When Quinn asked about "barriers to women in leadership" she responded:

We probably, in the Anglican Church of Canada, have the highest percentage of women bishops of any place in the [worldwide Anglican] Communion. So it’s a place where more and more women are being elected, so I feel like we lead in that regard.

With that said, not just in the religious realm and in the church, but in all aspects of work and civic life there’s that unconscious bias that expects women to do certain jobs and not do others, and that inhibit women themselves from putting themselves forward for leadership roles...
All I have experienced in Canada, in my role, has been collaboration and cooperation. Really. And I’m astonished to say that, but it is what I would say from my personal experience.

(Click this link for the full interview, it begins at 1:21 mark)

Archbishop Skelton takes office immediately and will begin by chairing meetings of the Provincial Executive. She will be installed formally at the commencement of the Provincial Synod, to be held September 14 -16, 2018, at Sorrento, BC - and will chair the Synod. Formal Notices of this election will be prepared by the Prolocutor, Dr. Randall Fairey for the Archives, and will be signed by the Chancellor and/or Registrar.

Dr. Fairey made the formal notification of election after speaking to the Bishop nominees, and also informing the Primate through his Principal Secretary, Archdeacon Paul Feheley as Archbishop Hiltz is out of the country. Archbishop Hiltz has given official notification that he will retire following the July 2019 triennial General Synod of the Anglican Church of Canada to be held in Vancouver. That General Synod will include the primatial election when a new Primate will be chosen by General Synod members.