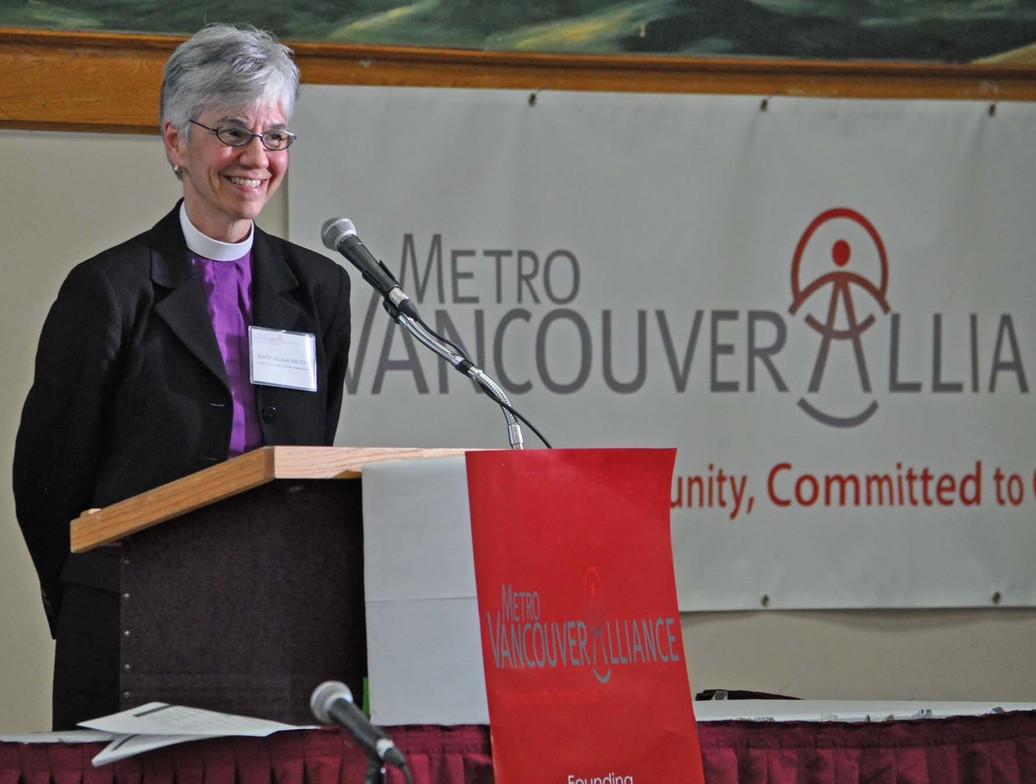 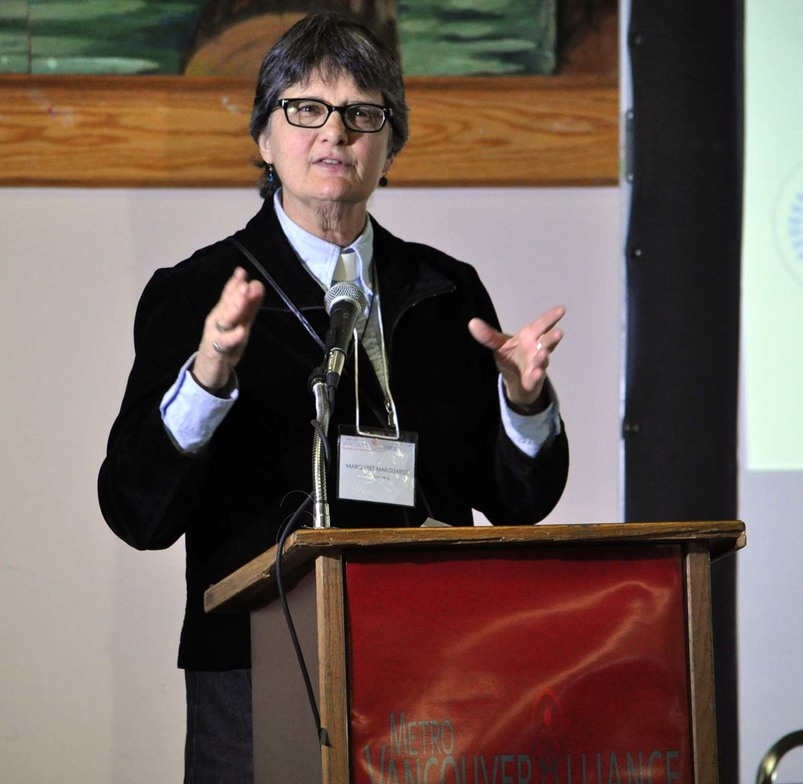 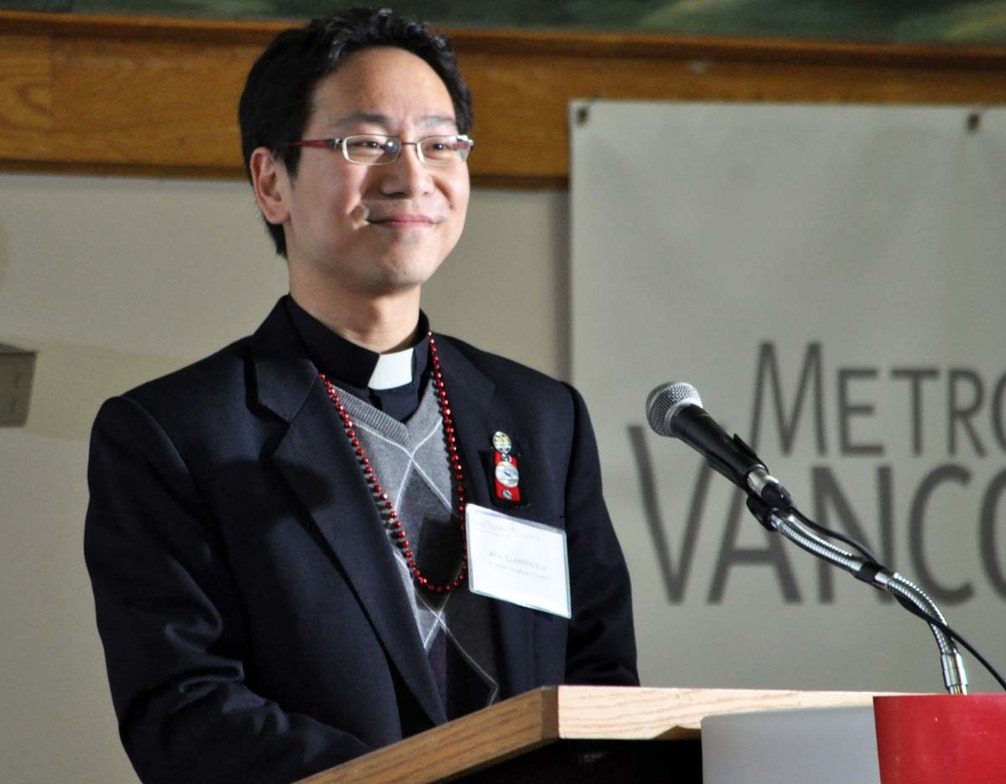 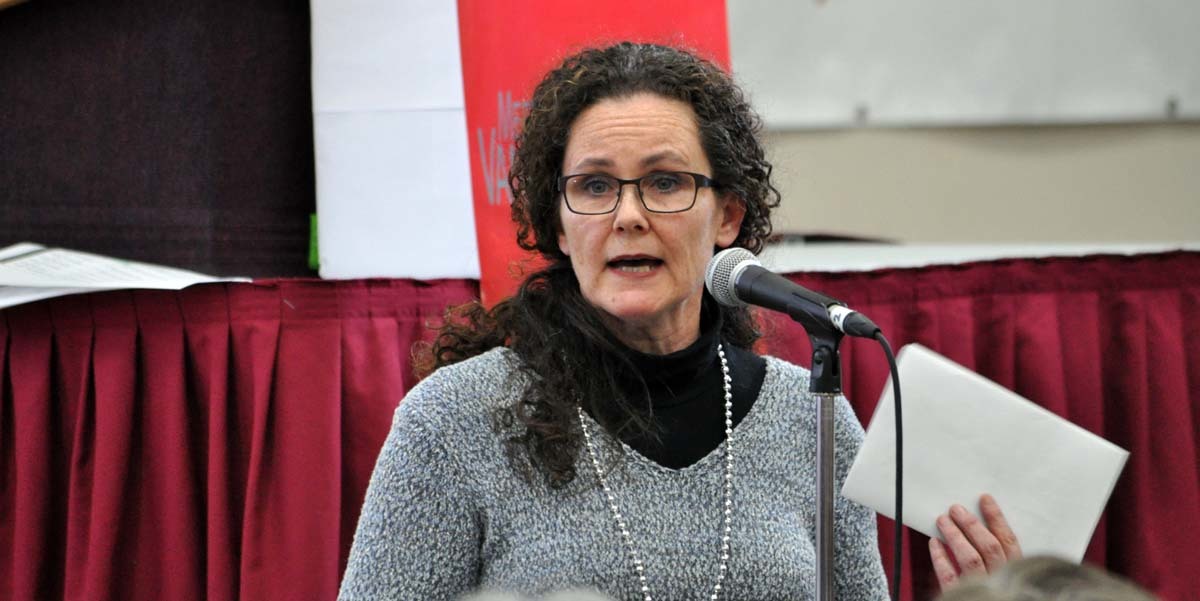 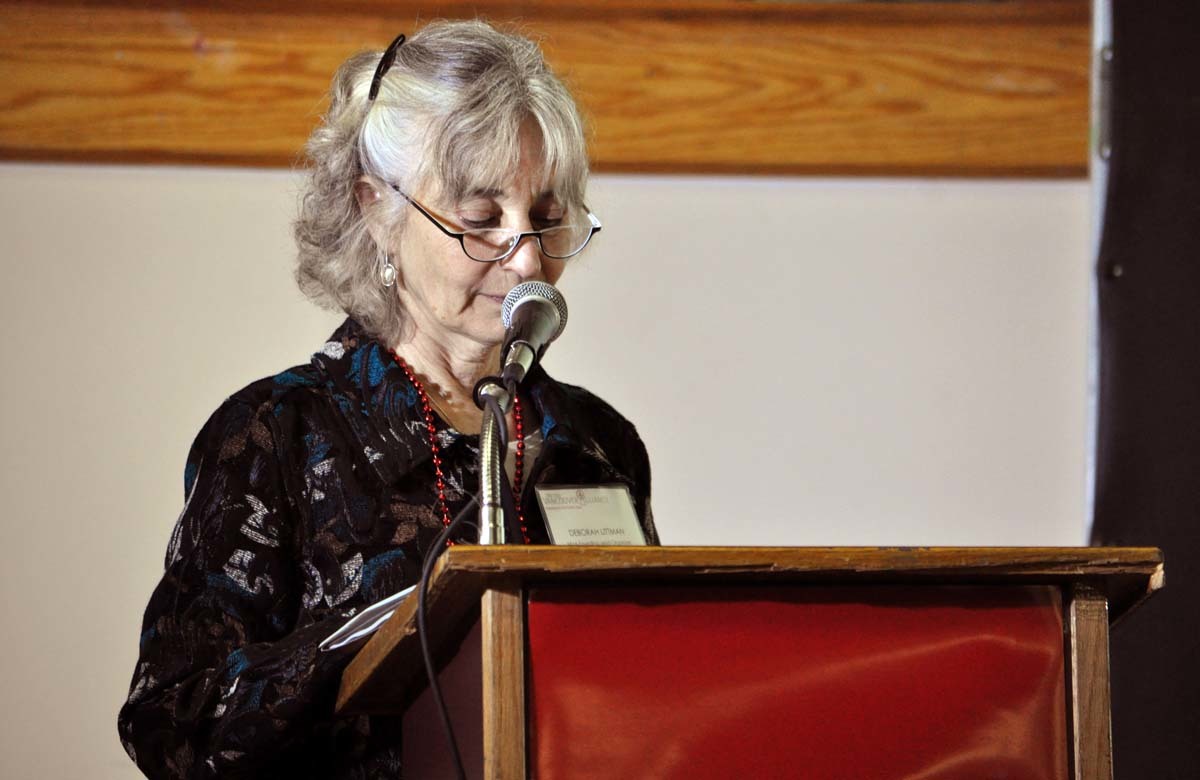 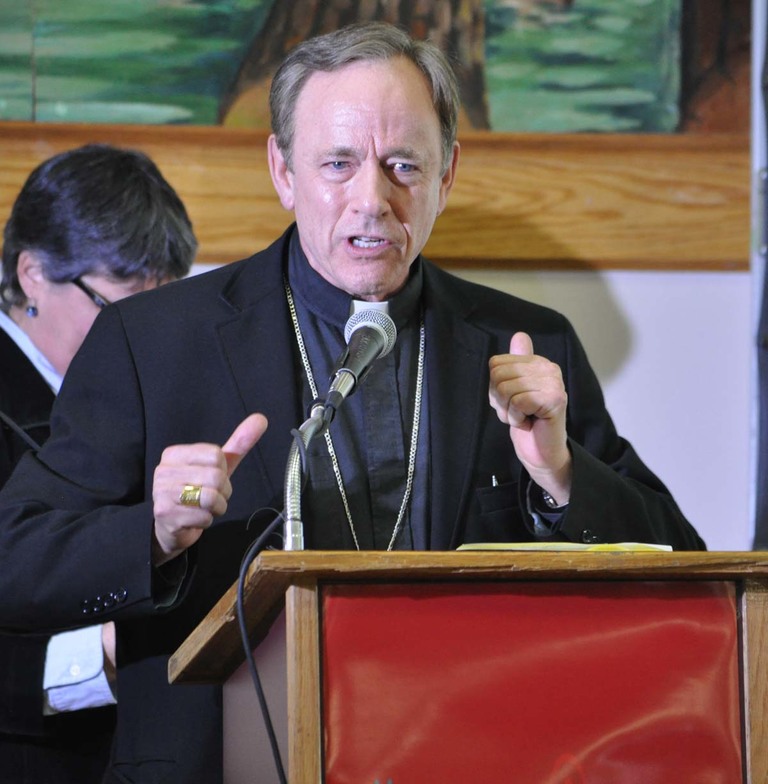 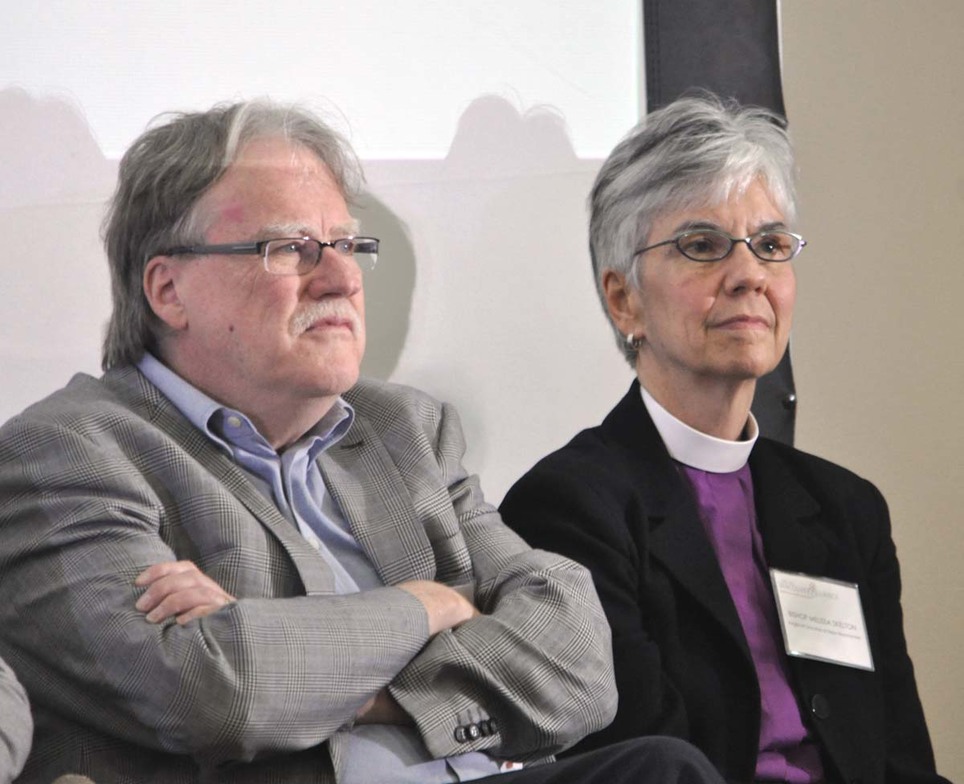 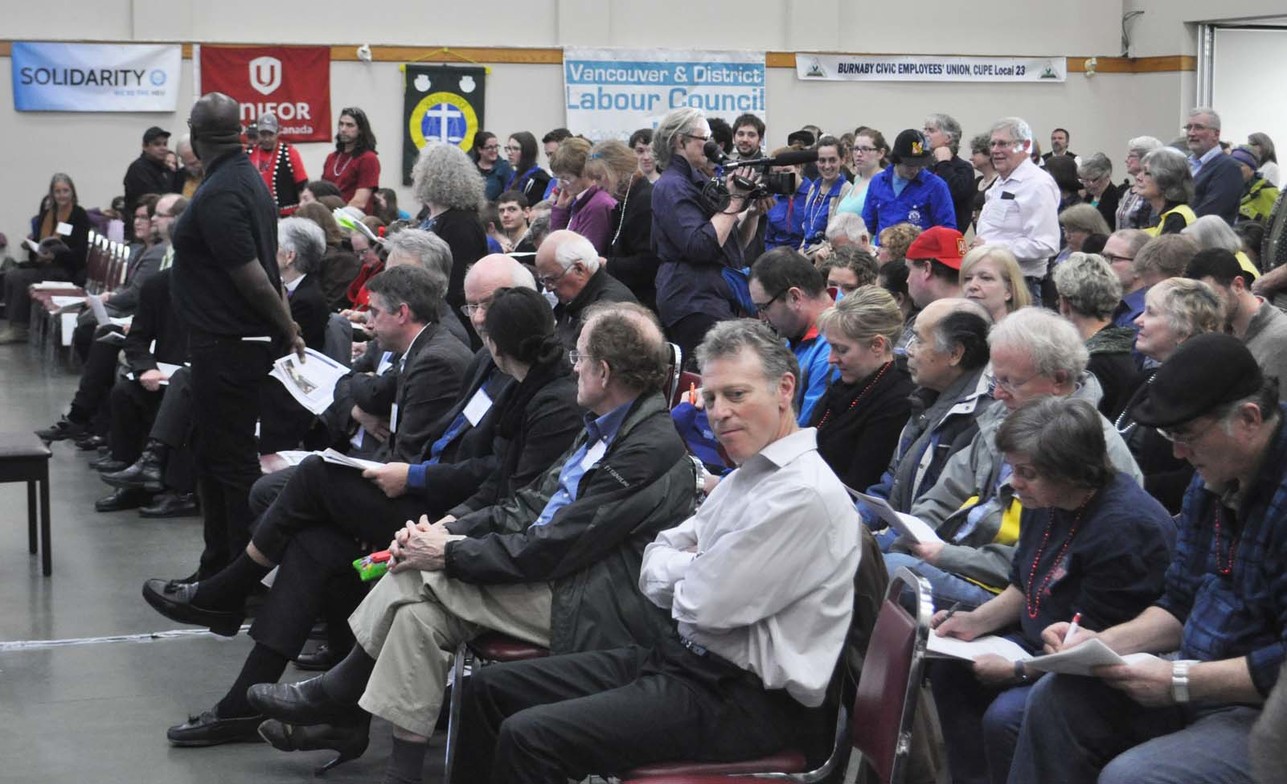 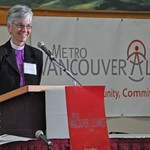 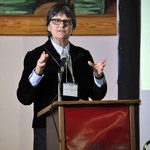 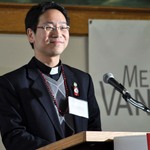 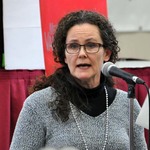 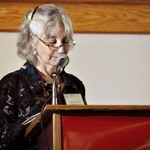 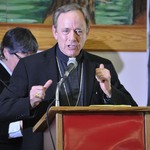 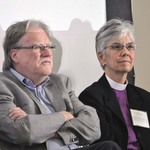 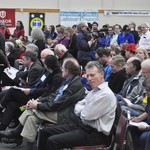 “Tonight we have reached the starting line and the best is yet to come.”-The Reverend Margaret Marquardt, Co-chair of the Founding Assembly Organizing Committee and Chair of the Eco-Justice Unit of the Anglican Diocese of New Westminster.

There were many memorable moments and sound bites from the Metro Vancouver Alliance Founding Assembly held at the Maritime Labour Centre in Vancouver’s East End on March 19th, 2014. The organizers of the event, the MVA Board of Directors and particularly MVA’s Lead Organizer, Deborah Littman couldn’t have asked for a better outcome, more than 600 people, standing-room only. Everyone involved is to be congratulated.

It was also a great night for Anglicans from the Diocese of New Westminster, much of the diocese being located in that other MVA, the Metro Vancouver Area. Doing a rough count there were probably in excess of 80 delegates and guests from Anglican organizations present.

MVA is part of a larger whole, the international Industrial Areas Foundation (IAF) and a regional group the IAF Northwest, but the connection to IAF is really about structure, training and the utilization of successful community organizing methods that IAF and IAF organizations have perfected over time. IAF is focused on building organizations by bringing together different groups and organizations in a broad based alliance to work for the common good and hold all levels of government and all political parties accountable. It is international but the focus is on the local and the goal is to build an organization that is powerful enough to act on the local issues that have been identified with a much greater opportunity to succeed than they otherwise would have as individual initiatives all working separately on the same issues. It’s about working together.

MVA was born out of a small room at St. James’ Anglican Church in the DTES in 2004, when a young Anglican priest named Clarence Li, inspired by the ministry of tireless social justice advocate, Sister Elizabeth Kelliher wanted to do more and get more people involved in relieving some of the suffering that he witnessed on a daily basis. This was nothing new, as prior to this time St James’ had had more than a century of social justice advocacy as a huge component of its ongoing ministry with people like: Father Clinton, David Somerville and May Gutteridge to name only three of many. But what was different was the intentionality of the young priest and his desire to involve others in the organizing process and to create a community. Other priests of the diocese, members of St. James’ parish and social justice advocates from other denominations came on board and a core was developed. Three years ago MVA hired Lead Organizer Deborah Littman who was an organizer for IAF in Great Britain and things got going in earnest. There is no need to delve into too much history of the founding and development of the organization as that has been well documented elsewhere. Metro Vancouver Alliance is in the process of creating a substantial web presence and more information about the group is readily available bu visiting the: website; Facebook page and twitter feed. They also publish a monthly newsletter as well for those who like to hold paper while reading, and the brief documentary film shown at the Founding Assembly is a good source of information.

The Founding Assembling got underway right on time at 7pm with Co-chairs and Co-MC’s, the Reverend Margaret Marquardt, Chair of the Eco-Justice Unit of the Diocese of New Westminster and Carlos Moreira, Vice-President of UNIFOR 111 and a member of St. Mary’s Roman Catholic Church vowing to stick to the timing of the program and to conclude at the scheduled time of 9pm. Margaret and Carlos welcomed the gathering saying that this is “an historic moment for Metro Vancouver Alliance” and that “tonight we have reached the starting line and the best is yet to come.”

First Nation’s Elder, Mary Charles was invited to the west side podium and after greeting the capacity crowd the charming Great-Grandmother, who is also a very engaging speaker welcomed the Assembly Delegates and Guests to Unceded Coast Salish land and offered a prayer.

Following the prayer and greeting, Margaret and Carlos welcomed by name the elected officials present. Margaret pointed out that MVA had invited representatives from all political parties to attend and to represent, however the majority if not all of the MLA’s present were opposition members.

There was a brief Skype communication from a new IAF startup in Cymru, Wales wishing the MVA all the best, followed by the Reverend Clarence Li, currently Rector of St. Hilda-by-the-Sea Anglican Church in Sechelt sharing the story of how he was inspired to compassionate service and community organizing by witnessing the exceptional ministry of Sister Liz Kelliher. Next on the agenda was a brief and well-edited documentary giving basic information about IAF and how the IAF organizing models and methods have been used over the past three years incorporating MVA into a global network and nurturing it along to its current stage - launching its Founding Assembly.

Prior to the MVA Institutional Roll Call, Margaret and Carlos went further into the philosophy of MVA and IAF. “IAF is focused on building organizations like MVA by training leaders and organizers. IAF brings together different groups from many, many organizations to hold political parties accountable.” They said, “We don’t waste our time arguing about what we don’t agree on…we don’t nominate anybody, we don’t elect anybody, we are totally non-partisan.” “We focus on institutions where people gather: FAITH, WORK (LABOUR), COMMUNITY.”

As an intentional and effective method of demonstrating the strength and diversity of MVA, representative delegates of 40 organizations lined-up at two different microphones to identify their organizations and pledge their support and commitment. This was the aforementioned MVA Institutional Roll Call. As the spokesperson for the organization took their turn at the mic, delegates from that organization stood so that the full cohort could be recognized by the Founding Assembly.

The next section of the program was titled, “Putting the Puzzle Together: The three sectors that make up MVA” and this is where three Community, Labour and Faith leaders spoke about their support of MVA and three more spokespersons from those three sectors responded. All six speakers: Paul Michael Taylor, Executive Director, Gordon Neighbourhood House and Virginia Weiler, Chair of the Board, VanCity Savings Credit Union on behalf of Community; Joey Hartman, President, Vancouver and District Labour Council and Jim Sinclair, President, BC Federation of Labour on behalf of Labour; Archbishop Michael Miller, Roman Catholic Archdiocese of Vancouver and Bishop Melissa Skelton, Anglican Diocese of New Westminster on behalf of Faith presented thoughtful addresses and were well-received.

When it was Jim Sinclair’s turn to speak he was greeted with enthusiastic applause and as the applause subsided he said “What it takes to change the world is in this room tonight.” He went on to say, that the Labour Movement should not isolate itself, “the Labour Movement is about being part of the whole world.”

During his address, Archbishop Miller reminded those present that that day, March 19th, 2014, was the first anniversary of the Inauguration of Pope Francis. He then went on to explain that even though it may seem difficult for groups from such different backgrounds to work together, all Christians are called to do the work of compassionate service, caring for each other as Jesus Christ taught us.

Responding to Archbishop Miller was Bishop Melissa Skelton. It is fairly unusual for an Anglican Bishop and a Roman Catholic Archbishop to share a platform, so unusual in fact that Vancouver Sun columnist, Douglas Todd blogged about it during the afternoon of March 19th. Up until her Consecration and Installation, March 1st, 2014, Bishop Melissa, an American, had for the past nine years been in ministry in Seattle. Although that Pacific Northwest City is only 230 kilometres south of Vancouver it is in a different country and although one could argue that things are generally similar in the US and Canada, they are however two very different environments when it comes to politics and social policy. When Bishop Melissa came up to the microphone she said that she was in her “second week on the job” and admitted to being “bowled over” by what she had heard and experienced that evening at the MVA Founding Assembly. She also said while smiling broadly and looking out at the 600, "I am the new kid on the block and this is the block I want to live on." Bishop Melissa is a skilled leadership trainer and for much of her career in ministry and in business she has utilized those skills. As a trainer and facilitator what impressed her a great deal is that the MVA organizing and building is being done "smart" with proper leadership training offered in advance of moving forward with the work. Bishop Melissa also made reference to our Baptismal Covenant when we pledge to strive for justice and peace for all people; work to safeguard the integrity of God’s creation; and respect, sustain and renew the life of the Earth.

Following an inspiring rendition of “If I Had a Hammer” performed by the St. James’ Community Music School Choir it was time to move to the Listening to Our Communities part of the program which contained the MVA’s Organizing for Action Agenda. MVA’s top four issues are: HOUSING, POVERTY, TRANSIT and ISOLATION. Again each item had two speakers but this time there were two civic politicians present to respond: Councillor Geoff Meggs , City of Vancouver and Mayor Darrell Mussatto, City of North Vancouver. Everyone spoke passionately about their issue. All four of these issues are of tremendous concern but the cruel reality of the housing situation for those of modest or marginal means in Vancouver is at a crisis point. MVA can be a tremendous opportunity to refocus the housing debate and work to alleviate the plight of vast numbers of working people who live in overcrowded and expensive conditions.

The Reverend Jeremy Bell, Executive Minister, Canadian Baptists of Western Canada when speaking about the issue of Poverty, said that the foundation of what is being built today can be attributed to the work of an Anglican, May Gutteridge. And then, in reference to the aesthetic beauty of our natural surroundings he asked this question, “Why don’t we make the community as beautiful as the surroundings that we live in?”

The penultimate event agenda item was a Call to Action as delegates and guests at the Founding Assembly were asked to stand in support of the MVA’s collective commitment to grow, and to fill in pledge forms signifying a personal commitment to get involved.

The evening ended with a reprise of the St. James’s Community Music School singing “If I Had a Hammer” and the aisles filled with swaying, clapping, delegates and guests joining their voices together singing the 1949 Pete Seeger and Lee Hays tune that remains a rallying anthem for those who are dedicated and committed to peace, justice and progressive social change “all over this land.”