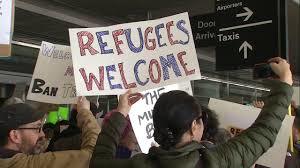 Rabbi Dan Moscovitz, Senior Rabbi of Temple Sholom in Vancouver took the lead in organizing a Multi-Faith Clergy Press Conference for 9:30am, the morning of Sunday, January 29 at Jack Poole Plaza.

Sunday morning is a difficult time for clergy in Christian denominations to attend press conferences, however the Diocese of New Westminster was well-represented by Chair of the Diocesan Refugee Unit (DRU), Shannon Muir and the Diocesan Coordinator for Refugees Dr. Satori Soden.

The purpose of the press conference was to announce the publication and distribution with signatures of a piece of correspondence that calls "upon the Canadian Government and Prime Minister Justin Trudeau to immediately extend temporary resident visas or permits for individuals who have American visas in hand, passed American security clearance, and who are stranded at American ports of entry only...Canada should favourably consider temporary resident visas or permits to Canada for individuals within this group who have been recognized as refugees by the United States, these individuals, who have passed American security and background checks, should be allowed entry to Canada."

(The full text and signature pages are linked below).

In a press conference that ran for less than 15 minutes (a video of the conference is available here) Rabbi Moscovitz and Rev. Richard Bott of Vancouver's Ryerson United Church gave brief statements before opening the event up to questions.

We stand together this morning as clergy from a broad spectrum of faiths. Joining with us in solidarity are more than 60 Ministers, Priests, Rabbis, Imans, Pastors, Religious Scholars and leaders from across the Province of British Columbia, and indeed across the whole of Canada who have joined our Call of Conscience and signed our letter calling on the Canadian Government to immediately issue Temporary Resident Visas to US Bound Refugees holding Valid US Visas Stranded at US Ports of Entry or in transit as a result of the Presidential Executive Order on Refugees and Immigration.

Each one of our scriptures and holy books tells a story of having been refugees and strangers ourselves, having been outcast or persecuted. These sacred teachings are there to remind us to see ourselves in the suffering and misfortune of others, because we were once them – we are all immigrants to some degree, we have every one of us been the other, the widow, the orphan, the stranger. We have been here before and we promised and prayed this would not happen again. Not in 2017. Not in North America.

The text of his statement is available linked below.

"It was a pleasure to attend this press conference with Clergy and Lay people from so many backgrounds. The group agreed that we should be called 'Human Beings' rather than Anglicans, Jews, etc. The Rabbi Moscovitz, Rabbi Phillip Bregman and Rev. Richard Bott spoke brilliantly about this issue and it was a privilege to stand with them."