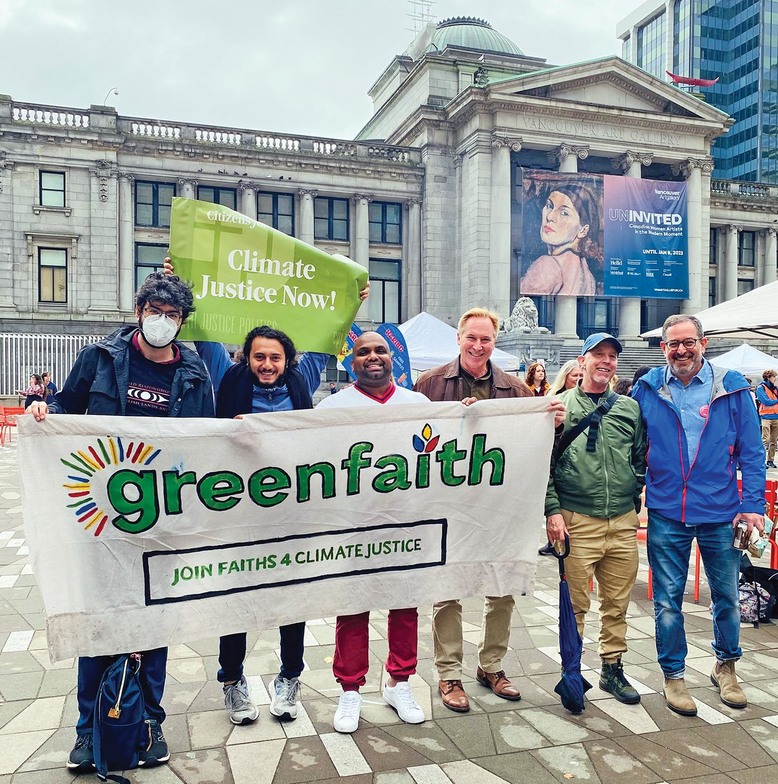 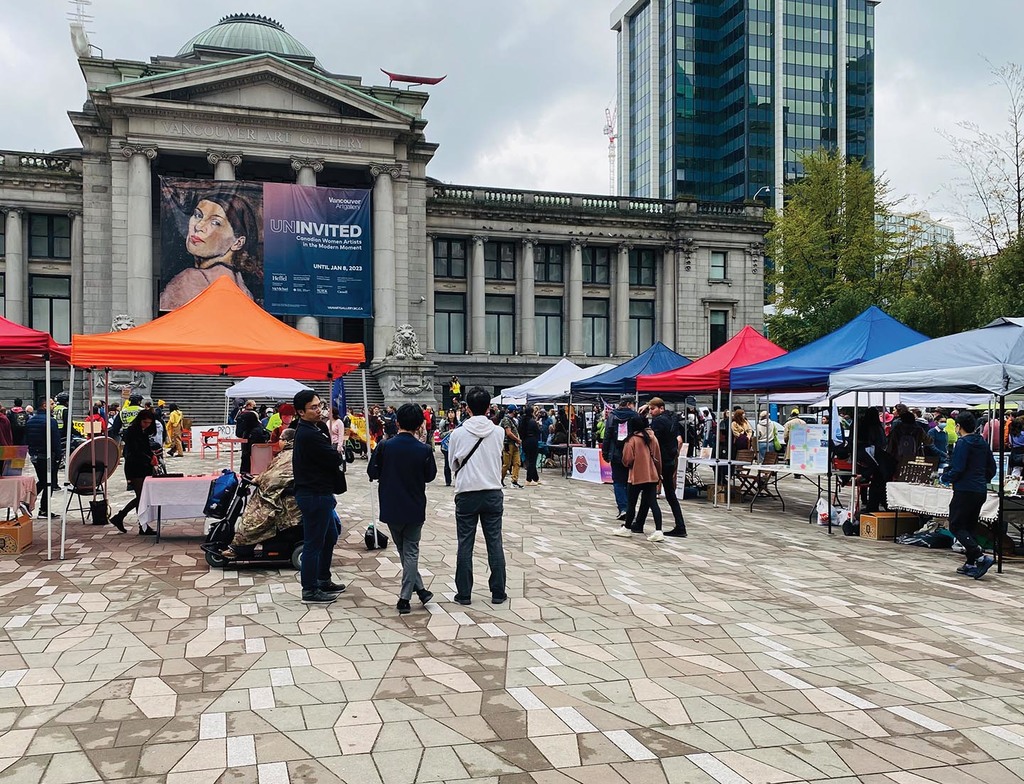 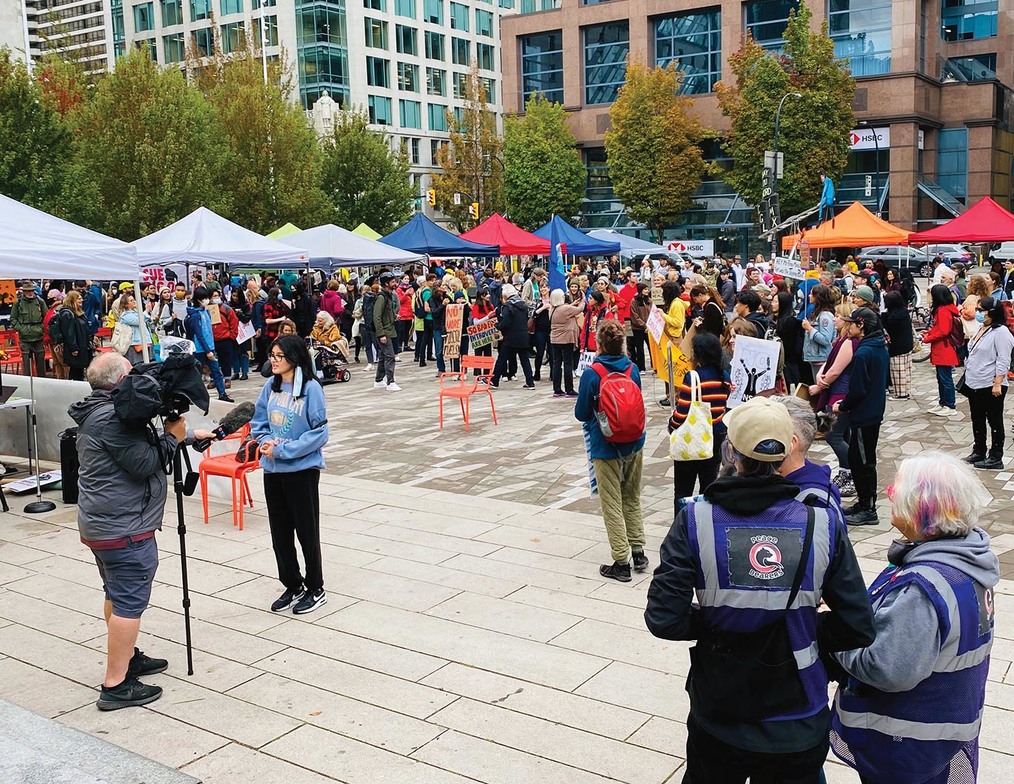 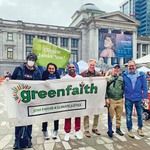 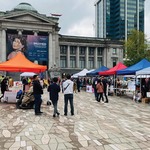 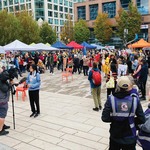 As part of the Climate Emergency Implementation Team under MMD in the Diocese of New Westminster, we have connected with other faith groups to see if there is a possibility of presenting a united platform/front to voice our concerns on the Climate Crisis. We feel a unified approach will have a much more significant impact overall and help spread awareness in a more meaningful manner. As an initial step toward collaboration, we participated in an inter-faith ministry meeting where we were joined by several representatives from various Christian denominations and eco-justice groups. It was decided that the first exhibition of our unified front would be participation in a Climate Strike/Protest to be held September 23, 2022. The information about that event is linked here.

Multiple groups concerned with the climate and environmental crisis gathered together in downtown Vancouver Friday, Sept. 23, 2022, for the Global Day of Action, conducted a rally from Coal Harbour to Vancouver Art Gallery and joined in chants, speeches and demonstrations highlighting the crisis and its drastic consequences. Hundreds of folks from universities, healthcare, environmental organizations, political parties, people who were concerned about the environment in general etc. showed up in support to voice their pain and apprehension regarding the deteriorating condition of our planet.

The groups the Diocese of New Westminster has connected with (To date): United Church, Vancouver Unitarians, Citizens for Public Justice, Vancouver Green Faith.

Here are some observations from the Multifaith Group members who attended the event:

“Coming together at the Climate Rally on Friday, organized by the Sustainabiliteens, was the highlight of my day.  This multi-cultural, intergenerational event brought together people in the community who share a sense of urgency, concern and hope.

We know that the climate emergency affects all of us, and while we each can do our part, the only adequate response is collective.  Personally, I find it easy to get sucked into a pit of shadowy despair when faced with the climate crisis so genuinely appreciate the opportunity to collaborate with people of faith as we consider effective means for congregational and governmental policy responses. Considering together how to focus our energy and resources is already a hopeful response.  On behalf of our staff and congregation, I can say that we’re grateful to be part of this shared work.”

“The atmosphere during the Fridays for Future climate march was youthful and energizing. Despite a lower turnout than expected those who showed up were dedicated and passionate individuals whose commitment to climate justice fueled the vibrant conversations and discussions that took place during the rally.

CPJ believes that it is important to amplify our shared laments and commitments, as people of faith, to work towards climate justice. This is why CPJ hopes that our newly formed group of faith leaders for the climate can engage Vancouver’s congregations in the work of environmental justice already being done by churches and organizations, such as the ones taking part in our new coalition.”

"It was energizing and inspiring to reconnect with various climate-concerned friends and meet new friends and allies at the march and block party. I am always inspired by the youth who have made climate justice their priority! Activism IS the antidote to climate despair."

"The world's major religions all advocate respect and care for creation as a key tenet of our faith traditions, and so it makes sense that churches, mosques, synagogues, and other religious meeting places would become organizing hubs for activism to resist and adapt to our civilization's worsening climate emergency. I'm excited to be a part of this emerging organization in Vancouver!"

Rather than reinventing the wheel, we've decided that in the current ‘infancy’ stage of our group’s formation, it would be prudent to support existing groups and/or events and move towards creating partnerships. The hope is to develop our own ethos and goals in the future as we further enhance our similarities and learn from our differences. Anyone within the Diocese of New Westminster who is moved by the Holy Spirit to be part of and/or support this Action group in any capacity, would be most welcome to get in touch with our Climate Emergency Implementation Group by sendin me an email: jeddy.james@yahoo.ca