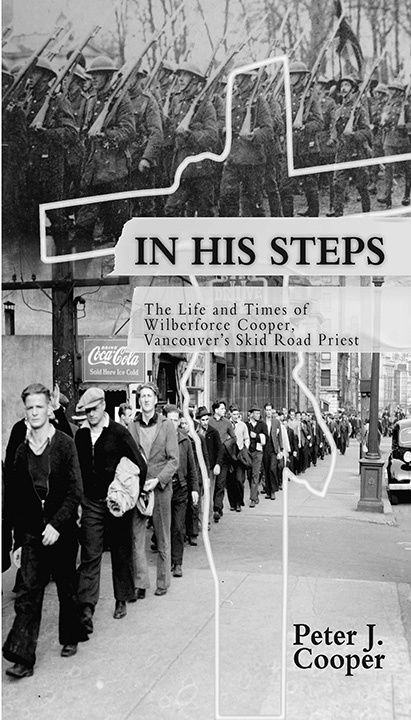 A new book about the Reverend Fr. Wilberforce Cooper of St. James', who ministered to the people of Vancouver's downtown east side 1921-1952, written by his great-nephew, Peter J. Cooper has been published by Friesen Press and will soon be available on Amazon.ca

Here is the link to the book on the Friesen Press website.

Reverend Cooper began his ecclesiastical calling in the slums of London and then as a British Army chaplain in the hospitals and trenches of WW1 before moving to Canada - first to the B.C. Cariboo and then to be the rector of St. James' Church in Vancouver. During the early-mid 1900s the East End of Vancouver was home to most of the city's poor, homeless, addicted and unemployed, and was a magnet for illegal intoxicants, disreputable venues and prostitution. In addition, the East End was where Chinese and Japanese immigrants had settled and their presence attracted the continuing attention of white racists. And all this vice and prejudice was enabled by a corrupt Civic Administration that depended upon graft. This was the parish that Father Cooper presided over and where he became well known and loved as someone who cared and fought for the physical as well as the spiritual wellbeing of each individual resident. The author has made use of unpublished memoirs as well as stories in newspapers and other writings to document his great-uncle's life and times. While a number of references to Rev. Cooper's religious thought and outreach can be found in the literature, this is the first book to address his work and actions solidly within the context of the social and political milieu of the Lower Mainland during his tenure.

Peter Cooper is a retired engineer with a background in research, who has had a life-long interest in history. His first book of historical research documented the life of his great, great-uncle and was titled "Samuel's Story: A Journey from Yorkshire to New Hampshire through the American Civil War". His next book was "Bombs and Babies: A War Bride's Diary" that described his mother's day-to-day life in WW2 Britain. Both books were published by Friesen Press, in 2015 and 2017 respectively. Both received good reviews from the Writers Digest Self-Published Book Awards and the Whistler Independent Book Awards. Peter resides in Sidney, British Columbia.