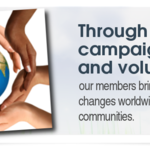 Mothers’ Union (MU) is an international organization that promotes Christian care for families worldwide.  It was founded in Old Alresford, England in 1876 by the wife of an Anglican clergyman.  Looking back, we would probably call the fledgling organization a ‘support group’ for local mothers raising their children in the Christian faith.  It has since mushroomed into an organization with four million members in eighty-two countries around the globe. The vast majority of members are Anglican women – lay and ordained - but membership in the Mothers’ Union is open to any baptized Christian including men.

There is a small but energetic and active chapter of Mothers’ Union in Canada. Most branches are in the eastern part of the country, but they are all under the umbrella of a National Executive, and there is a national conference every two years.   A biennial conference was held in the Diocese of New Westminster in 2010.  Canadian membership in MU hovers between 600 and 800.

The Diocesan Chapter of Canadian Mother’s Union currently has two Parish Branches, St. James, Vancouver and St. Cuthbert, Delta and associate members in several other parishes including St Anselm and St Stephen, West Vancouver. There are also branches in the Diocese of BC.

Although few in numbers, the BC branches did a very able job of forming the National Executive and governing the Canadian Mothers’ Union for a four-year term, from 2008 to 2012.  Those holding office on the Executive included: Celia Dodds, ODNW of St. James;  Shirin Theophilus, ODNW of St. Anslem’s;  Linda Adams, ODNW of St. James and the Reverend Christine Rowe, assistant priest at St. Mary's, Kerrisdale.

It is exciting news that a new MU branch is being established at St. Mary the Virgin, South Hill in southeast Vancouver. The Branch Leader will be Grefa Pinera, Vice- Branch Leader Felipa (Felly ) Farinas, Secretary Chris Ticad and Treasurer Mildred Colombong.  Fourteen women will be enrolled in the branch.  They will be installed on Sunday, September 9 during the 10:30am Eucharist.  It will occur on the same day that Archbishop Skelton will make her Episcopal visitation to St. Mary’s, South Hill. Diocesan communications plans to cover the event for publication on these website news pages and in an upcoming issue of Topic, the monthly publication of the diocese.

The mission of Mothers’ Union is to share Christ’s love as they encourage, strengthen and support marriage and family life in its many forms through the organization’s ministries and program offerings.  The scope of the work being done by Mothers’ Union is vast, and limited only by the imagination. In developing countries, Mothers’ Union is often a major provider of health care, literacy programs, parenting programs, and projects to empower and improve the lives of women, both socially and economically.

In every country, Mothers’ Union is committed to creating conditions in society that support stable family life and the protection of children.

At a community level, individual Mother’s Union branches are free to choose their own projects to improve conditions for families locally, nationally or internationally, and to find ways to help those in the community whose family life has met with adversity.

At the parish level, MU branches contribute to the life of the church in many ways such as preparing parents to have their children baptized and hosting a reception after the service; assisting with Sunday School and nursery; sponsoring events/fundraisers that support MU projects and contribute to the fellowship of the community; and in many other ways.

The aim of the Mothers’ Union is “to demonstrate the Christian Faith by the transformation of communities worldwide through the nurture of the family in its many forms….We believe in the value of the family as a source of love and support for individuals and the basis for a caring community.”  (see canadianmothersunion.ca)

Congratulations to the new Mothers’ Union Branch at St. Mary the Virgin, South Hill as they join with the worldwide MU in this important work.