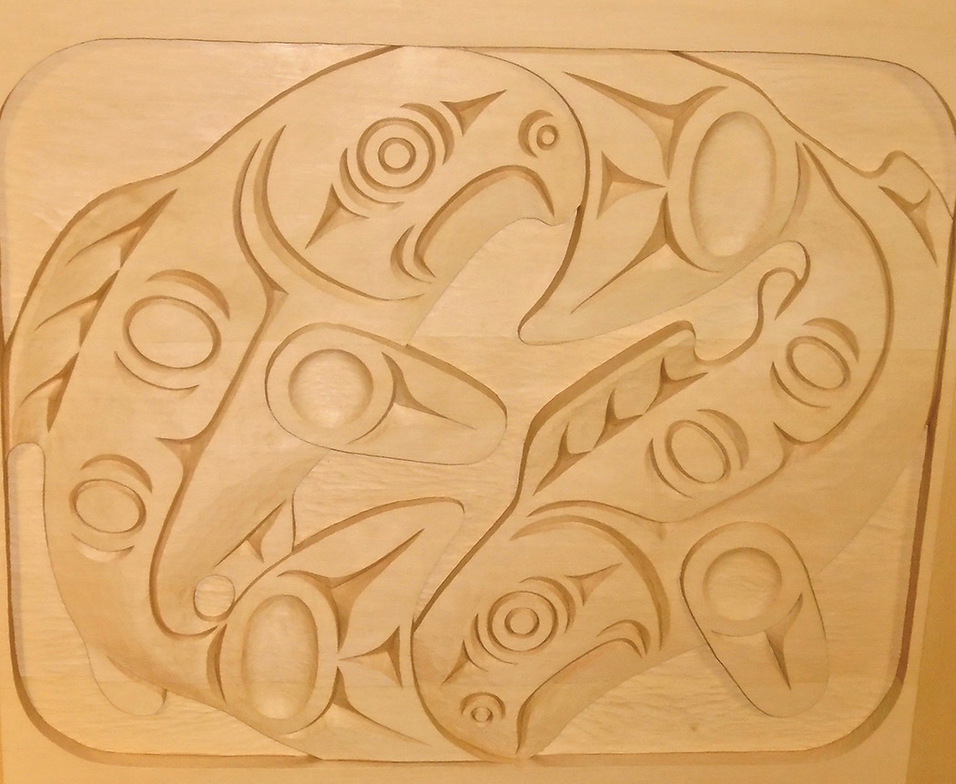 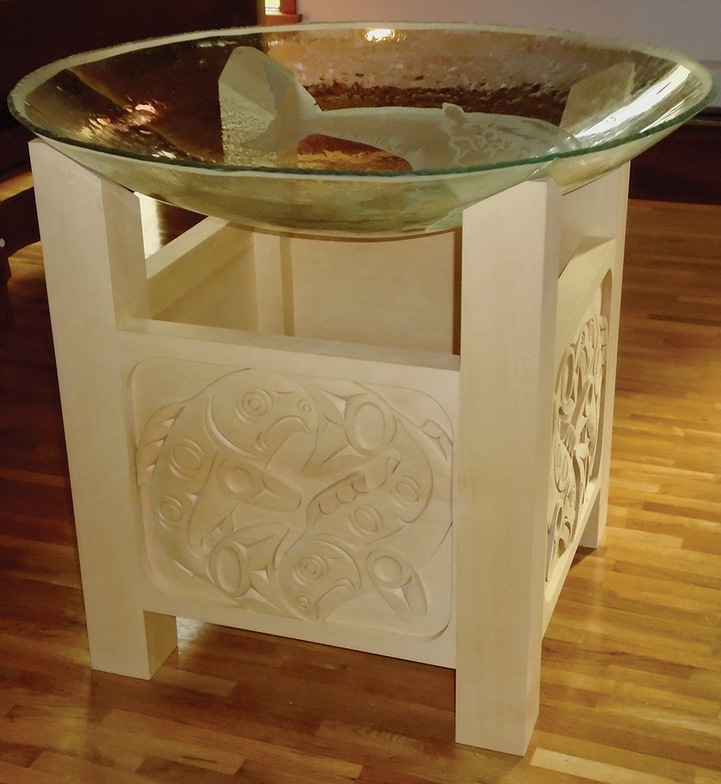 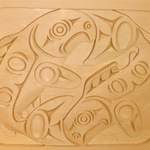 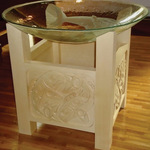 St. Catherine’s new font is a stunning piece of art. The large glass bowl has a whale design sand blasted into it. It is one of a series of such bowls some of which were commissioned for churches in Texas as baptismal fonts. The bowl was donated to St. Catherine’s by Kelsey, the daughter of Jacqui Smart. This large kiln-formed bowl with a whale design etched on the bottom was crafted by a team of incredible artists, under the supervision of multi-discipline artist and Lower Mainland resident, David Danchuk.

The stand on which the glass bowl rests was carved by the well-known First Nations carver Jim Charlie. Jim was born in North Vancouver in 1967, and currently lives on First Nations land in the Village of Capilano near the Lions Gate Bridge.  He is a member of the Squamish Nation, which is part of the Coast Salish people. Jim has been carving since he was a child.  He comes from a long line of First Nations artists and carvers.  His grandfather was Dominic Charlie, a highly regarded carver. He was mentored by some of the most highly respected First Nations artists. His great-grandparents were Joe and Mary Capilano and Mary Ann and Jericho Charlie.

In addition to selling his art in many galleries in the Vancouver area, Jim creates commissioned works. A totem pole he carved is in Switzerland commissioned by a Swiss client and he is currently working on a coffee table for a customer who wants four bears as legs looking into a pool of salmon.  He says he would love to carve more fonts (ours was his first commissioned font) and someday would love to carve a lectern or a pulpit!

Jim was fortunate to find a piece of rare Yellow Cedar for the font.  He says this also makes our font unique as such wood is hardly ever found. It was important to St Catherine’s that our font have a Salish design to honour the Salish people of the Squamish, Musqueam and Tsleil-Waututh Nations on whose land our church sits.

Jim chose the salmon because the Salish people believe that the salmon have a spirit which is sent by the Creator to nourish us. He also researched the fish symbol in Christianity and looked at Anglican traditions and found that fish were an important symbol in the early Christian Church. Jim was raised in the Catholic Church and is now a Baptist.

There are two salmon carved on each side of the font for a total of eight. The number eight in Christianity symbolizes new creation and a new beginning. Eight is also the symbol of Infinity representing the infinite energy and love of God.

Jim says he carved one salmon swimming up and the other one swimming down so that they are flowing up and down around the font like a piece of music.

Jim says that his art is not his. “I let the Creator guide me and the Creator’s Spirit flows through my hands.”  He is a deeply spiritual person honouring both the Christian and Squamish traditions.

St Catherine’s is blessed to have such a stunning piece of art carved by an outstanding Squamish artist.