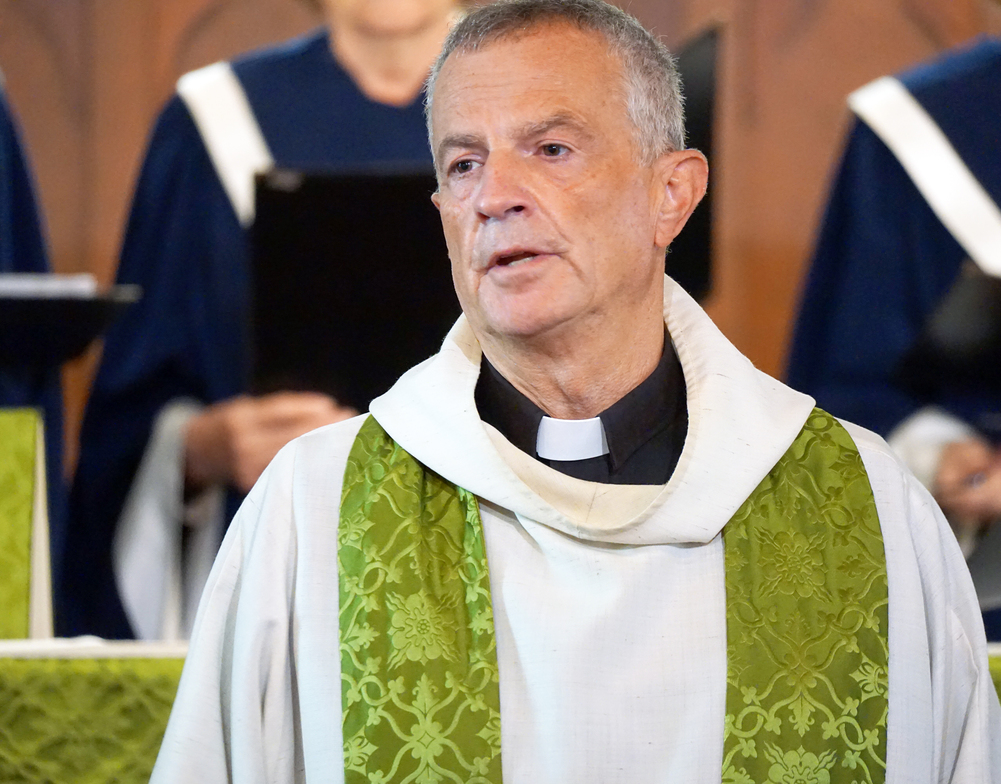 On Sunday, September 12, 2021, the 16th Sunday after Pentecost, the Reverend Dr. Angus Stuart celebrated the Eucharist as he has been doing for almost 17 years. This however, would be the final time as rector of the beautiful parish located in the Caulfeild neighbourhood of West Vancouver, St. Francis-in-the-Wood. Rev. Stuart officially retires as rector of the parish on October 1, 2021.

He was kind enough to take some time to answer some questions for diocesan communications.

Although not totally unheard of, an incumbency of more than 15 years is fairly unusual in this day and age.  In your opinion what are the key components of an enduring relationship between rector and parish?

Probably forbearance and trust.  The former necessary in any long-term relationship; the latter hopefully the product.  Also, for me certainly, a willingness to change things up fairly frequently so that things don’t get stale or stuck in a rut – like any relationship!  Aside from that, time is an illusion and people are people!

What would you consider to be the major accomplishments of the parish during your time as ordained leader of shared ministry?

I think we have a strong and caring community, and it has been good to see this develop and grow over our time together. Sometimes it has not been easy, as is the case everywhere, but I believe we have emerged from the challenging times stronger and healthier.

Did you always find yourself on the “same page” as the laity when it came to liturgy or was there some negotiation needed?

Liturgically, there has been very little disagreement or conflict.  I have tried to put liturgies together in a way that balances the familiar with the new, and that reflect something of the culture and character of our parish community which I see as “non-partisan” liturgically speaking – an absence of axes to grind – and open to new forms of expression whilst rooted in worship that is still “recognizably Anglican.”

And… following that similar thread, did you always find yourself on the same page when it came to compassionate service, outreach to the greater community?

Yes, generally.  I can’t think of an example where there was any sense of disconnect in this area.  We know that we are very privileged to live the life we live in the place we live it, and are conscious that much is expected of those to whom much is given, and therefore the impetus to reach out to others less fortunate than ourselves.  Social outreach and social justice have always been very important at St. Francis-in-the-Wood and tend to generate a lot of energy and activity.

What would you consider to be the greatest challenge or challenges during the 16.5 years?

Finance.  Not lack of it, but rather anxiety surrounding finance: despite having so much (or perhaps because of having so much), there seems to have been a perennial anxiety over whether we’d be able to meet the budget, and somewhat frantic appeals for money sometimes – which always (always!) came for whatever cause needed it.  Social Outreach and other direct appeals were always the easiest to raise funds for; second were clearly defined projects – e.g. the new roof we put on last year; most difficult were the funds needed for the ongoing expenses of the church.  And as in any relationship, finance is often a fertile ground for conflict!

Is there anything that you wanted to accomplish that didn’t get done?

Not really.  There’s always more that could be done.  But one advantage of being here so long is that there has been plenty of time to see many projects and programs through to completion.  I had intended to lead a third pilgrimage to Assisi in 2020 but it got nixed by the pandemic, but Assisi is still there and I hope that perhaps there will be future pilgrimages from the parish to connect with the heart of their namesake saint, but that will be up to future Rector and leadership of the parish.  I certainly hope to be in Assisi again myself.

The world has changed a great deal in 17 years, particularly around information sharing and technology, how did this affect parish ministry and your role as rector.

Email of course has become the primary means of communication within the parish, and this has meant that communications have become much easier – easier to send and receive a response, and easier to keep a record of what has been said.  For many years, I have had the practice of emailing everyone in the parish each week not only with announcements but with also a pastoral word, some brief commentary on the Sunday readings, and prayer requests.  In the pandemic this increased to twice per week.  It has become the main means of communication along with our website, which has also come to function as the repository of the church’s story, effectively replacing the paper-archives of parish newsletters/magazines – not that these don’t still have their place.  Most recently, of course, and prompted by the pandemic, we have made the leap into offering worship online – initially recorded services on YouTube and then since June livestreaming (with recordings archived on YouTube) – and the now ubiquitous Zoom which has become very popular and convenient for many meetings including Parish Council (which seems to be much quicker/efficient when it’s online!).

You are well-known in our diocese and beyond for your dramatic performances of the Gospel of Mark, “Testimony of a Naked Man’ and the Gospel of John, “Word of Light,” how did this part of your ministry inform or affect your role as a parish priest and are you planning to do more of these performances in retirement?

Yes, I hope to do more performances once things really do open up again and we can have live in-person performances with some degree of confidence.  Things are still too precarious really to make any concrete plans such as performance tours.  How it informs my role as a parish priest?  It certainly informed my preaching with a much greater facility and fluidity in my use of scripture – not just the Gospels of Mark and John, but knowing those two also gave me greater insight into Matthew & Luke (because they weren’t Mark or John!) and with the rest of the New Testament – for example, seeing where St. Paul connects with the themes and message of the Gospels (which were for the most part written after Paul).  I also became acutely aware of Jesus’s own standing in relation to official or organized religion, which has perhaps fed into my somewhat anarchic ecclesiology!

Is there a piece of Scripture that you have gone back to over the years for inspiration?

As you look back on your career in ministry is there anything that you wished that your seminary training or curacy had prepared you for (sorry to end the questions with a preposition…)?

I sometimes wonder if my seminary training prepared me for anything, but that would be too harsh, and I certainly do not have anything particular in mind to suggest.  I guess I wonder whether any seminary training (or curacy for that matter) really does prepare us for what comes next, other than by just being before what comes next.  Everything is a preparation for what follows.   I most value the theology and biblical studies that I did at seminary.

What advice would you give to the next rector of St. Francis?

No, honestly, I think that would be presumptuous (and a bit pompous) of me to offer any advice.  Maybe, remember to breathe.

A few days after the September 12 liturgy, Reverend Stuart circulated an email, thanking the community and outlining a few of his future plans, that email is available here and below on this post