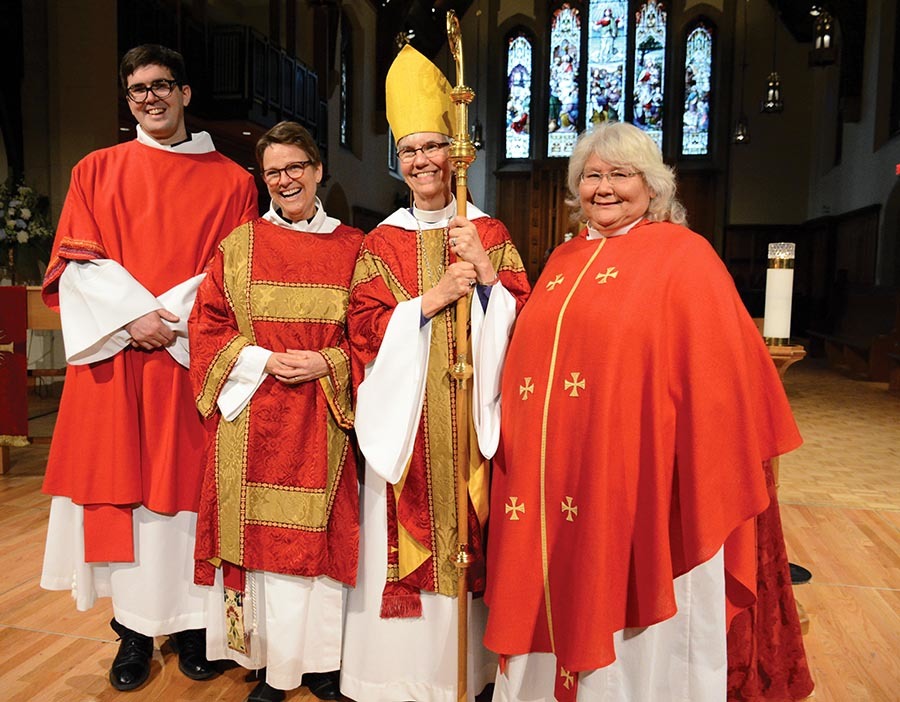 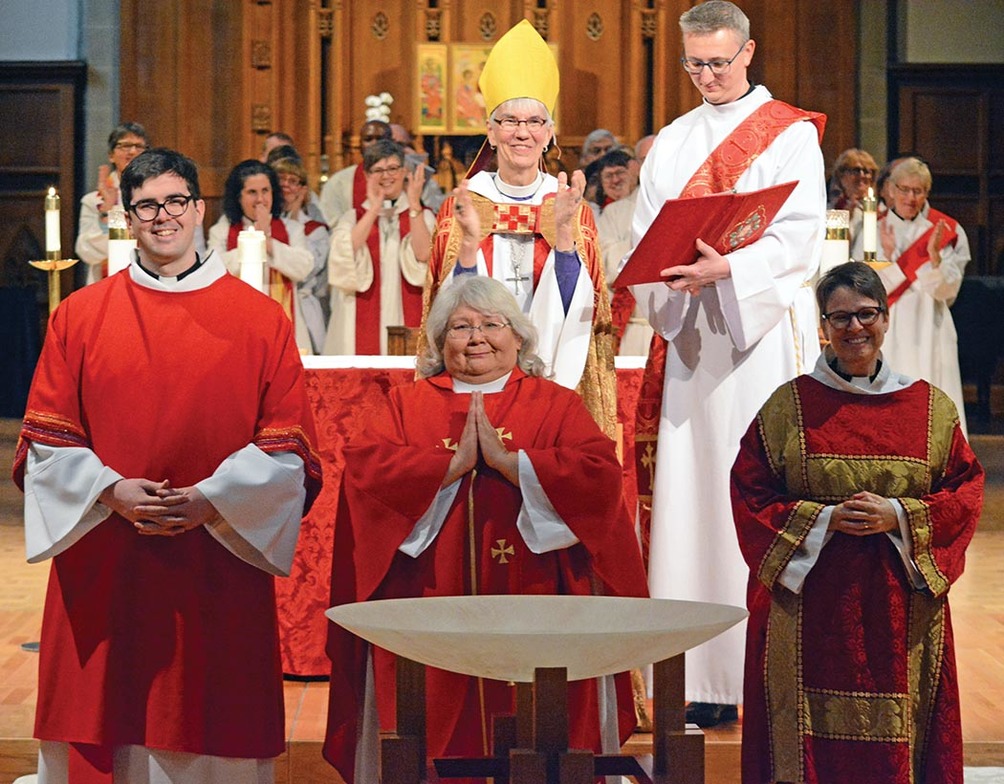 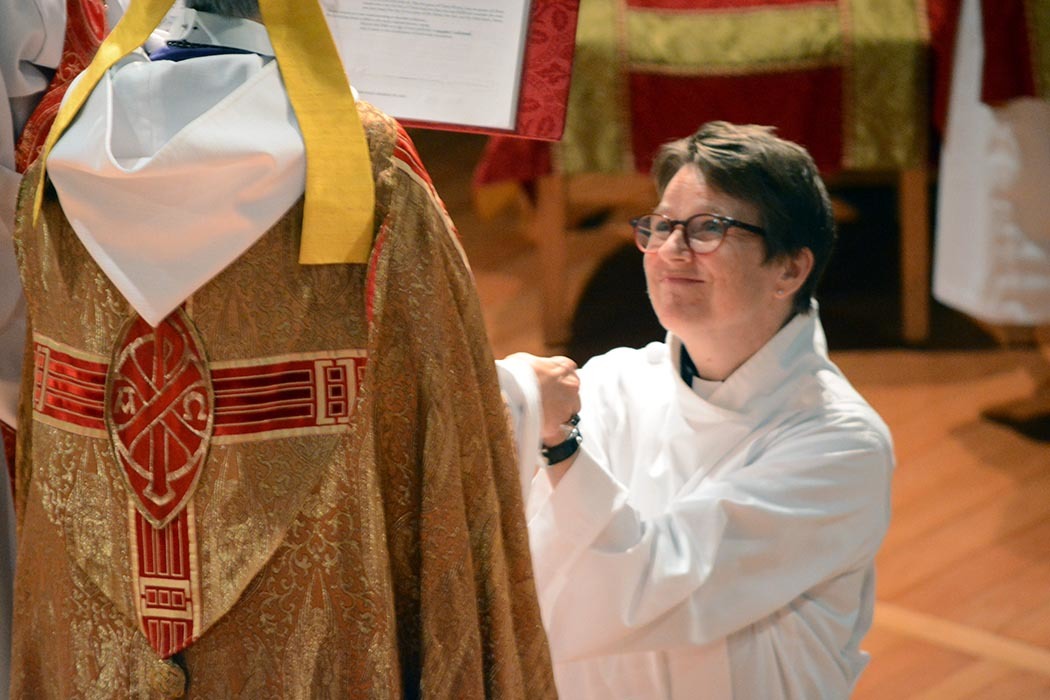 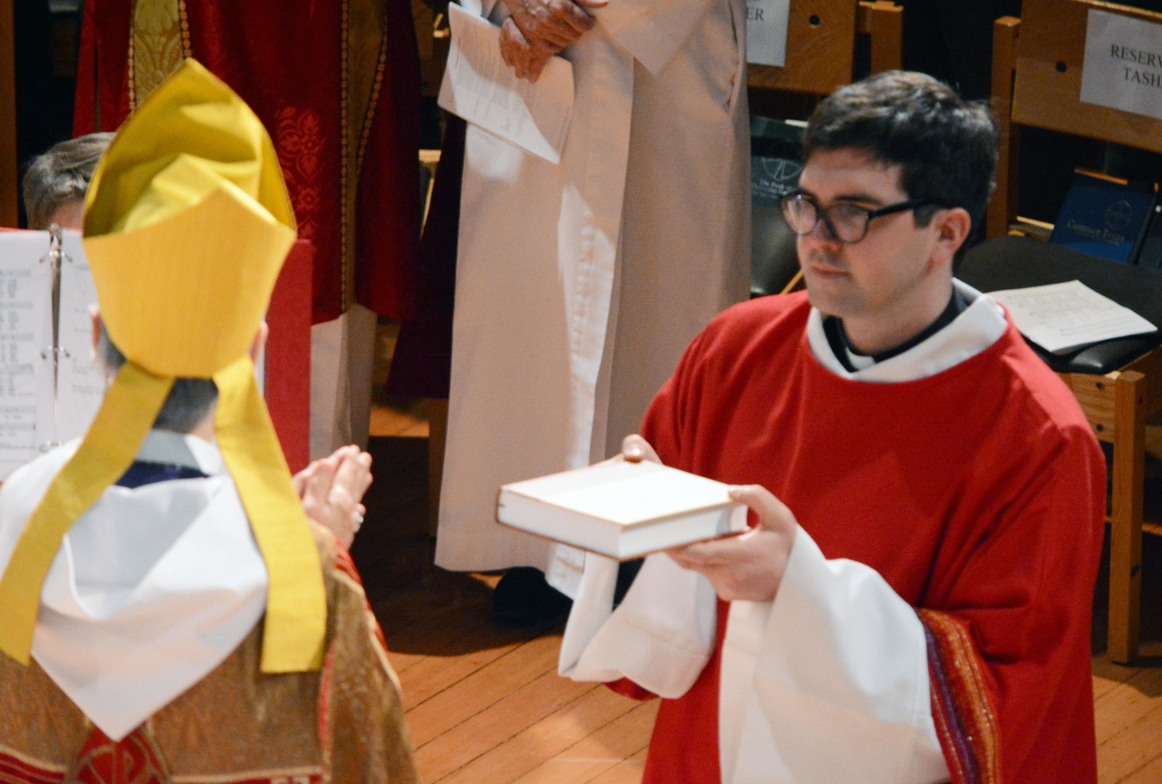 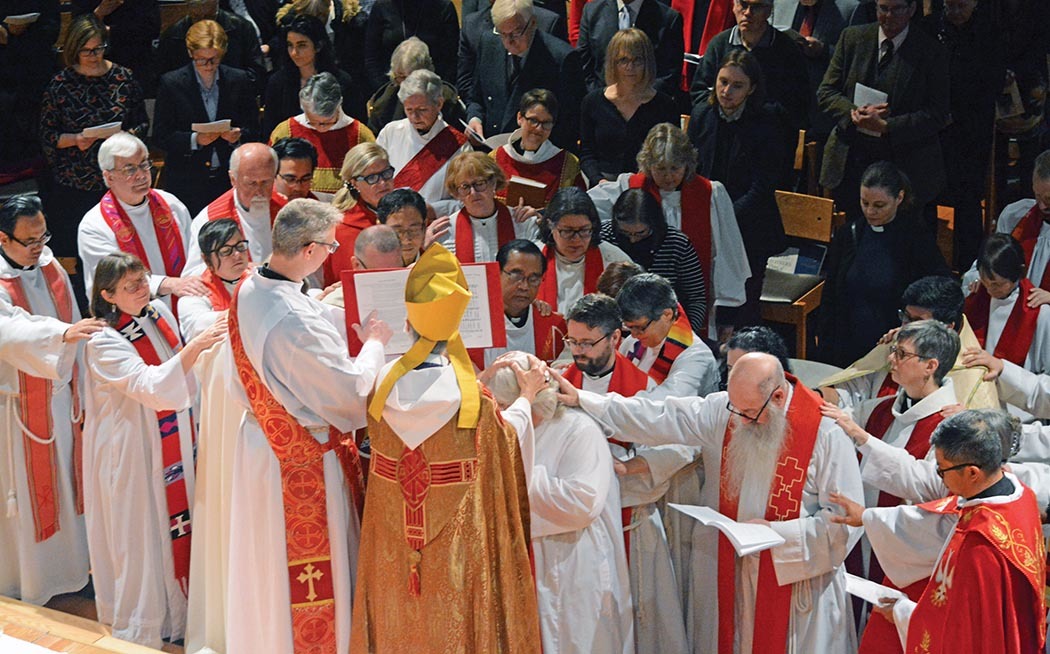 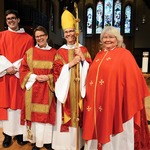 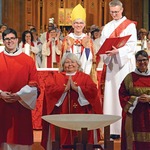 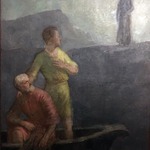 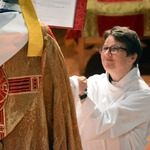 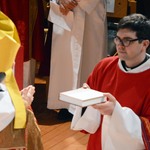 By the Most Reverend Melissa M. Skelton, Archbishop of New Westminster & Metropolitan of the Ecclesiastical Province of BC & Yukon

To the Priesthood: The Reverend Vivian Margaret Seegers The Feast of St. Andrew the Apostle (transferred)

In 2018, there were three Ordination Eucharists in the Diocese of New Westminster, the first was January 21, the second June 23 and the third, December 1 on the Commemoration of the Holy Day of St. Andrew the Apostle (transferred from November 30).

The ordination on January 21 was at St. John’s Shaughnessy and there was one ordinand, Vivian Seegers, who was ordained to the transitional diaconate. At the December 1 ordination held at Christ’s Church, the Cathedral Church of the diocese, Rev. Seegers was ordained priest, becoming the first Indigenous person in the Diocese of New Westminster to be priested

Tasha Carrothers and Cameron Gutjahr were ordained to the transitional diaconate on December 1. As with Rev. Seegers, both of these ordinands had been raised up through their communities here in the diocese and their arrival at this point in their lives as Christians and as leaders has been many years in the making. Rev. Tasha Carrothers has been a member of Synod Staff for many years and a member of Christ Church Cathedral for as long or longer. She is well known throughout the diocese due to her ministry as the Missioner for Congregational Development and her seminal work with the Diocesan School for Parish Development. Rev. Gutjahr has been a leader among diocesan youth for many years both at St. Mary’s, Kerrisdale and the Sorrento Centre.

During the middle portion of Archbishop Skelton’s homily she asked each ordinand to stand as she said a little bit about their backgrounds and their journey. Archbishop Skelton positioned her remarks within the context of the Gospel, Matthew 4: 18-22 and the inspiration of a painting with the title, “Call of St. Andrew” where a mysterious figure is seen in the background to the right of the principal figures. An image of the painting is included with this post.

The following is what Archbishop Skelton had to say about the three:

First, Tasha Carrothers. Tasha, engaged, passionate, talented, Tasha has assisted many, many parishes in learning who they are and what they want to work on. And, of course, she has done this as a highly effective lay person whose success, in a sense, has had to do with the fact that she was a lay person. But that darn mysterious figure, the one shown in the painting, would simply not let up on her. That darn mysterious figure kept intruding into her otherwise successful work saying—yes, you have done important things with your skills as a lay person—now take those skills and both hold to them and let them go. Move from one who is comfortable and skilled in her role as consultant, as facilitator and as a trainer and follow me into the mystery of what it might be like to serve and to lead, to listen and to let your perspective be known, and at the root of everything you do, to carry the people you serve on your heart before God. Tasha Carrothers.

Second, Cameron Gutjahr.  Cameron has been in the Anglican Church of Canada since he could draw breath. He has been the youth, and he has been a leader of youth. And he has done it all well.  Irrepressibly positive and outgoing, it would have been easy for Cameron to keep doing what he was doing in the places that he was accustomed to and among people who knew and loved him. But that darn mysterious figure, the one I described in the painting, kept intruding, saying, come Cameron, follow me come away from what is familiar to you in your parish, in this diocese, at the Sorrento Centre.  Come and leave all those familiar things and come to Huron College where you will, of course, be your affable, gregarious self but where you will also meet people who don’t know you, who will question and challenge you, but who will strengthen you for the ministry ahead of you. Cameron Gutjahr.

And finally, Vivian Seegers. The first Indigenous woman to be ordained priest in this diocese, Vivian has worked for years at her own cost and then later with the support of the parish of St. Mary Magdalene to serve Indigenous people in the Downtown Eastside. In and through these experiences Vivian, I believe, has encountered that intrusive, mysterious figure I described in the painting. And this is, I believe, what he has whispered to her: “Follow me, follow me into the unfamiliar and the perilous. Follow me more deeply into the very Church that has wounded you and your people. Follow me to become an agent of reconciliation for your people and for the Church.  Follow me, sundancer and priest.  Become a wounded healer for all the people I love. Vivian Seegers.

(Archbishop Skelton’s homily is available here on the diocesan website.)

Approximately 50 clergy of the diocese vested and processed with the priests taking part in the laying on of hands as Rev. Seegers was consecrated priest.

Following the ordinations and priesting, Jerry Adams (aka Nii K'an Kwsdins) , a long time parishioner at St. James’ and the Indigenous Justice Ministry Coordinator for the Diocese of New Westminster came forward to read a message from National Indigenous Bishop, the Right Reverend Mark McDonald who wrote:

I am writing on behalf of Indigenous Christians across the land to send our congratulations and happiness to all of you at the ordination of Vivian Seegers and those she will be ordained with. We have been eager to see this happen and now celebrate this event, promising you our prayers, love, and hope. It is a glorious day.

Personally, I also send greetings and prayers. It was my great desire to join you, but could not, due to scheduling. I am very happy for you all and promise my prayers. Vivian is a leader among us and a cherished sister of Indigenous Christians across our Land. May God be with you all on this very special occasion.

Following the worship, the newly ordained and consecrated stood with Archbishop Skelton for photographs and a festive reception was held downstairs in the hall of Christ Church Cathedral.

The Reverend Vivian Seegers continues in her ministry as Assistant Curate at St. Clement's, Lynn Valley, and as the ordained leader of Urban Aboriginal Ministries (UAM) that is based at St. Mary Magdalene in the Vancouver General Hospital district. The Reverend Tasha Carrothers continues in her ministry as Missioner for Congregational Development and Coordinator of the Consultants network at the Diocese of New Westminster. She will continue her ministry placement at Holy Trinity, New Westminster under the mentorship of the Ven. Richard Leggett. However, following ordination she now has the title, Honorary Assistant Curate. Following his ordination, the Reverend Cameron Gutjahr returned to his seminary studies at Huron University College in London, Ontario. He is scheduled to graduate in the spring of 2019.

For many more photos with captions please click the link to access the photo album on Anglican Conversation the Facebook page of the Diocese of New Westminster.