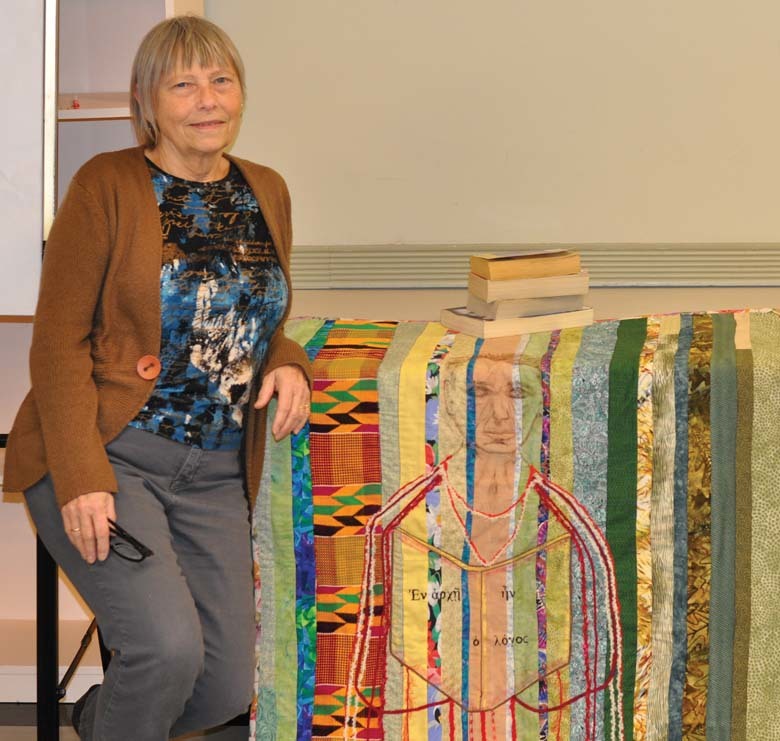 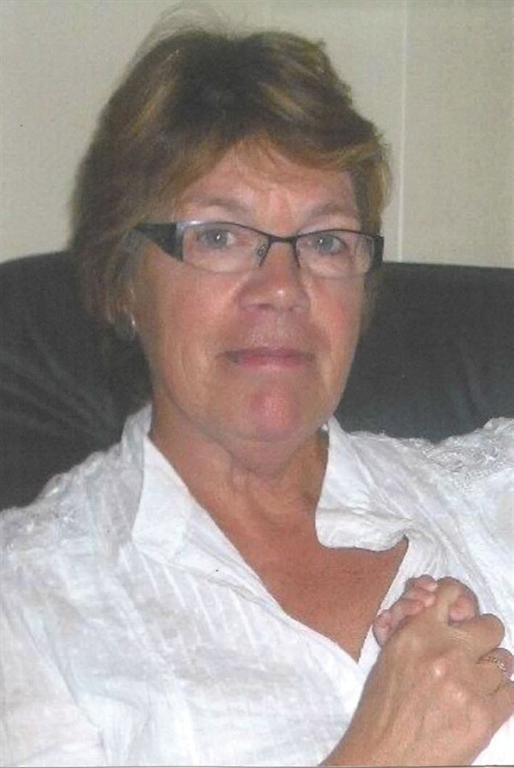 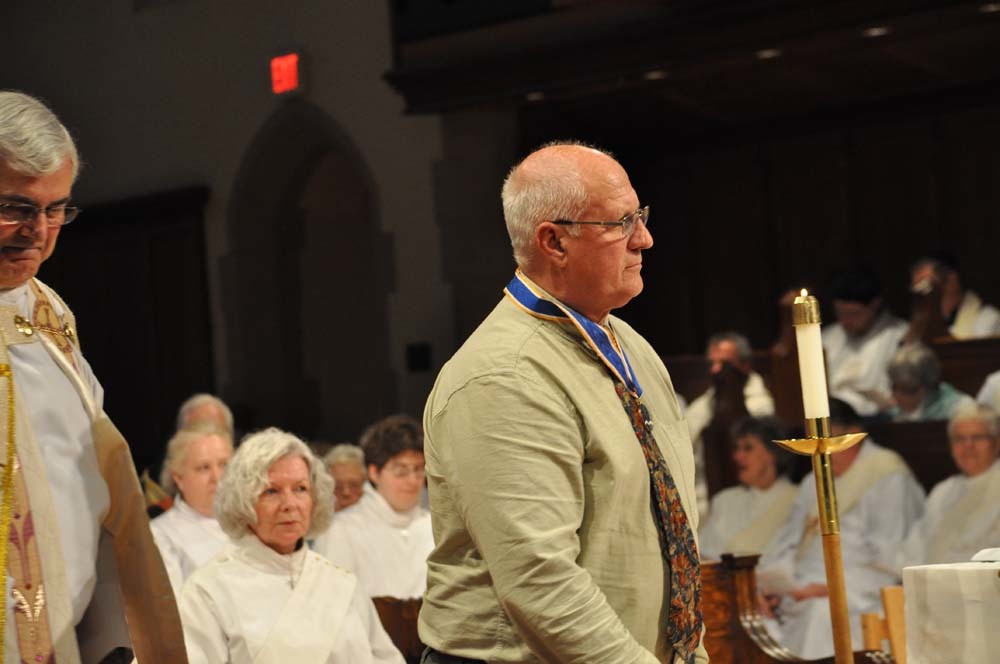 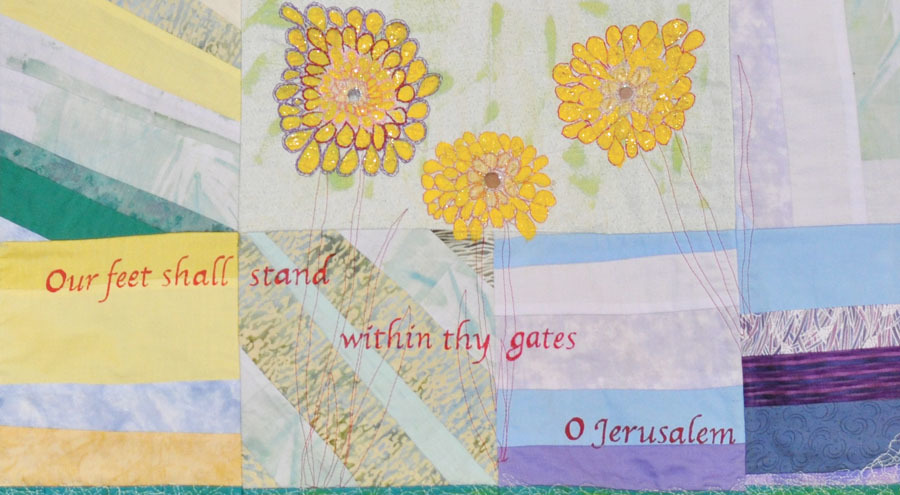 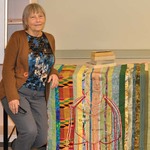 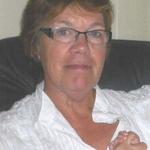 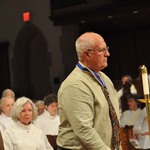 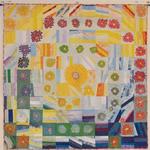 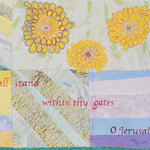 On Sunday morning, October 28th at the Celebration of the Eucharist, a new liturgical decoration was dedicated and added to the sanctuary of St. John the Evangelist, Anglican Church in North Vancouver.
The new decorative piece now displayed on the northwest interior wall is a quilt consisting of three sections. The quilt is the work of three women of St. John’s: Penny Connell, a parish leader and administrative volunteer with deep roots in the Parish of St. John’s NV (her grandparents were members of the parish and worshipped in the original building 70 years ago) who is currently one of two parish representatives on the North Vancouver Deanery Regional Council , Jaye Edwards, a long-time parishioner who at the age of 95 is still active in parish life and Lesley Philbrick a vibrant and enthusiastic member of the parish who at the time that the project was launched in 2010 had recently been diagnosed with cancer.
The first section, looking from left to right bears an image of St. John the Evangelist. Penny was responsible for this panel and for crafting the image. It was important to her that the image be connected with the beautiful stained glass windows in the church, many of which were previously part of the original church building (now part of the Presentation House/Museum property at the corners of Chesterfield and West 3rd Avenue in North Vancouver) and installed in the current building. Penny was mindful that St. John appear of indeterminate age and as Penny worked on the image the expression developed into one of quiet contemplation. The larger central panel depicts a spiral which is representative of the St. John’s Labyrinth located in a courtyard on the church grounds. In addition to the circular shapes, the centre section’s main theme is, Jerusalem and the text that is printed on the lower portion of the central section is from Psalm 122, “Our feet shall stand within thy gates O Jerusalem.” Those words were chosen because they were printed in the Order of Service for Lesley Philbrick’s funeral. Lesley died of cancer in April of 2012. Psalm 122 was a great favorite of hers. The third panel is the Tree of Life which Penny describes as resembling a Douglas Fir. This section of the work was based on Jaye's desire to include an interactive component that could be added on to enhancing and/or contemporizing the piece as years go by or as the liturgical seasons change. The branches will be a palette to which different elements can be added depending on the liturgical year or the creative spark. Penny envisions, flowers, leaves, even captions being added to the “Tree’s” branches.
October 28th. , 2012, was a special day in the life of St. John the Evangelist, North Vancouver as they dedicated a symbol of their parish community, but even more so it was the day that Lesley Philbrick was posthumously invested as a member of the Order of the Diocese of New Westminster. Lesley was St. John’s nominee for the order for 2012 .
Lesley’s husband Gerry relocated back to the United Kingdom after his wife’s death but he returned to Vancouver to accept his wife’s award and to be present for the dedication of the quilt.
The three panels of the quilt were installed during the week following the Sunday, October 28th dedication. Next time you find yourself in the central Londsdale neighbourhood at 220 West 8th Street take a moment to visit the sanctuary, view the quilts and perhaps say a prayer of thanksgiving for those in our communities who share their gifts and talents in order to bring beauty to our worship and our surroundings.
This article is an excerpt from a feature article that will be published in the December, 2012 issue of TOPIC, the diocese's monthly publication.
Images: Top, Penny Connell with the St. John panel. Upper right, The Late Lesley Philbrick, ODNW. Lower left, Gerry Philbrick moves to be greeted by Bishop Michael after receiving Lesley's ODNW award from Archdeacon Ronald Harrison. Below: Top, the three panels on the wall. Bottom, the text from the centre section.
North Vancouver
St. John the Evangelist