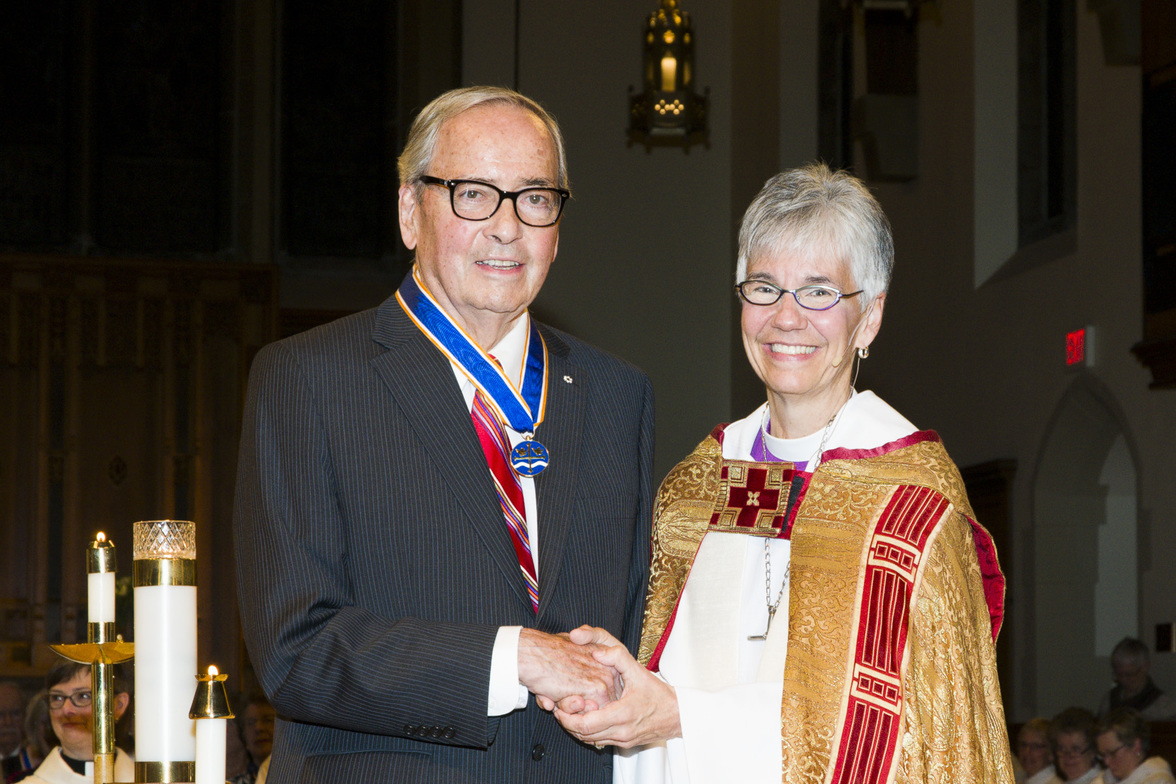 By action of the VST Board of Governors, the degree of Doctorate of Divinity honoris causa, will be conferred on Philip Walter Owen, C.M., ODNW, at the upcoming VST Convocation on May 11, 2015 at 7pm at Shaughnessy Heights United Church at 1550 West 33rd Avenue.

Philip Walter Owen (born March 12, 1933) was the 36th mayor of Vancouver, British Columbia from 1993 to 2002, making him one of Vancouver's longest serving mayors.
The cornerstone of his political career was his belief that addiction is an illness, which requires treatment as opposed to a moral or legal lapse, which requires punishment. His innovation was entitled The Four Pillar Approach which combined prevention,
treatment, law enforcement and harm reduction. He was a pioneer in this field. The policies he championed ignited a national debate, which resulted in a more nuanced view held by society. Across the country, laws and their application changed to reflect solutions
other than punishment. As a result, crime and drug related illnesses were significantly reduced in urban environments. The integration of the Four Pillar Approach with the formation of Canada's Mental Health Commission resulted in an urgency being placed on
housing for those people afflicted by addiction and mental illness. The change of priority from punishment to support has yielded many social benefits to individuals, families and communities.

In recent years Philip Owen has received recognition from many organizations, including B.C. Health Officers, Simon Fraser University, Lions International, Rotary International, the Brotherhood Inter-Faith Society, the B.C. Civil Liberties Association, the Richard J. Dennis Drug Peace Award (New York) and the Canadian Criminal Justice Association. In the past he has sat on the boards of: Ovarian Cancer Canada, Opportunity International, the Salvation Army and Vancouver International Airport. He and his wife Brita have travelled to drug policy reform conferences throughout the world.

In the spring of 2008, Owen was named a Member of the Order of Canada, the country's highest civilian honour. A longtime member of St. John's, Shaughnessy Anglican Church, Philip was invested into the Order of the Diocese of New Westminster on November 1st, 2014. Vancouver School of Theology congratulates Philip Owen on his achievement of the Doctorate of Divinity honoris causa.

The VST Board of Governors has also awarded an Honoray Degree to author, theologian and United Church Minister the Reverend Dr. Edwin Searcy. The degree of Doctorate of Divinity honoris causa, will be conferred on Dr. Searcy, at the upcoming VST Convocation on May 11, 2015.

In the photo, Bishop Skelton congratulates Philip Owen on his investiture into the Order of the Diocese of New Westminster, November 1st, 2014. Photo: Wayne Chose