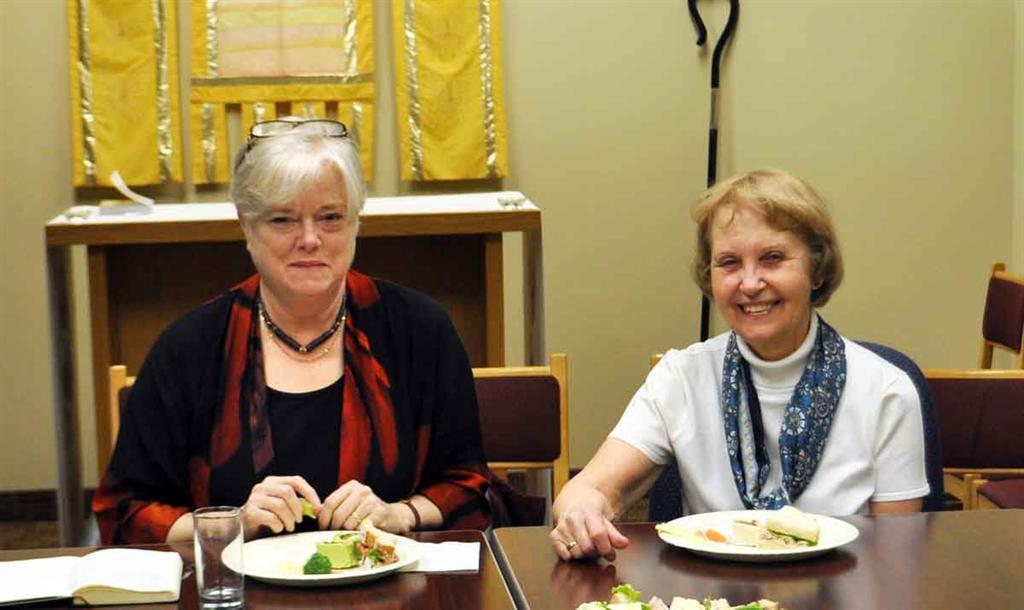 On Thursday, April 19th, 2012, the Chair of the Diocesan PWRDF Unit, Peter Goodwin of St. James’ brought a special visitor to the Synod Office at #580-401 West Georgia. The special visitor was Ms. Adele Finney, Executive Director of PWRDF. Adele had traveled to Vancouver to connect with family but while here she included an agenda of PWRDF related activities.
During her time at the Synod Office, Adele and Peter met with Diocesan Business Administrator, Rob Dickson and Diocesan Stewardship and Planned Giving Director Glen Mitchell. Just after 12 noon a number of parish PWRDF representatives arrived at the office for lunch and a meeting with Adele. Amongst the group was Denise Hambidge (All Saints, Ladner) who has been deeply involved over the years at various levels in the PWRDF organization including a position on the Board of Directors and continues with her support and leadership for the National Church’s emergency aid organization.
Following the lunch, Adele had some other meetings with churches in the diocese who are looking at different ways that they can support the initiatives of PWRDF.

On Saturday, April 21st at St. Alban’s, Richmond Adele was Guest Speaker at a special deanery dinner where among other topics she described the experiences of a delegation of PWRDF reps from across Canada who travelled to India and Sri Lanka to support in the spirit of accompaniment the organization OfFer, which as a partner has received PWRDF funding for 29 years reaching out to Tamil refugees who fled Sri Lanka and settled in Southern India. This event was organized by PWRDF representatives from the three Richmond parishes of; St. Alban’s, St. Anne’s and St. Edwards’.
There will be additional coverage of this event in the June issue of the diocesan monthly publication, TOPIC.