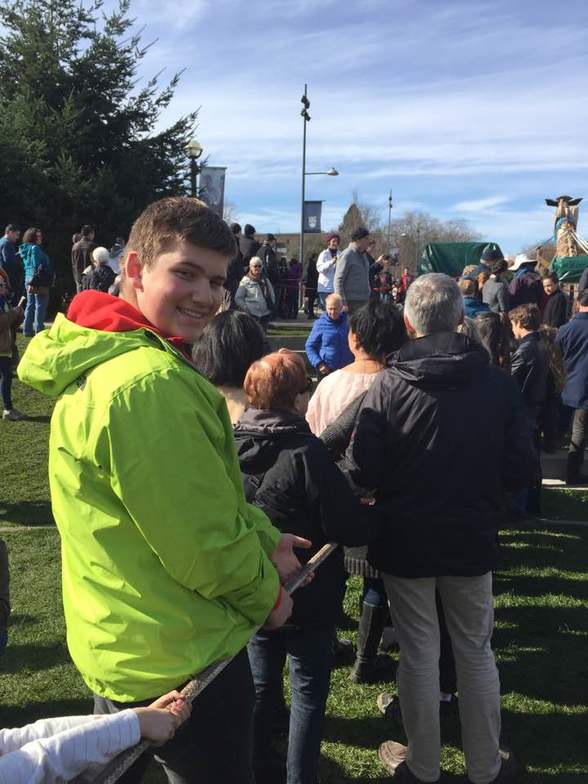 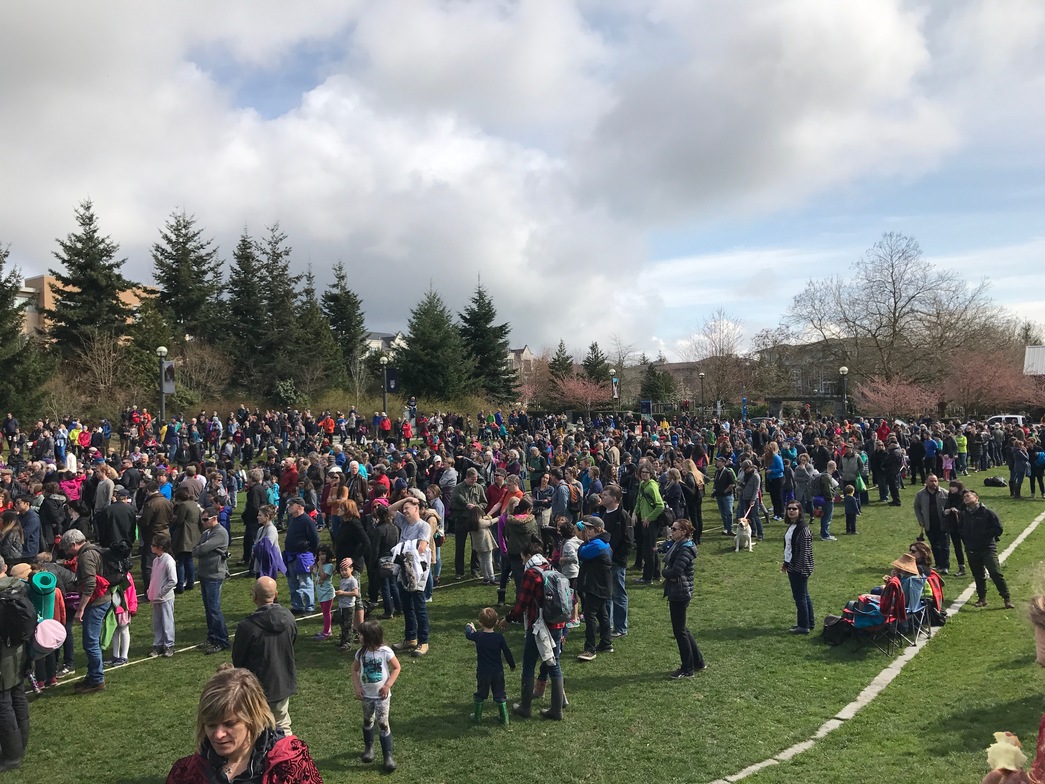 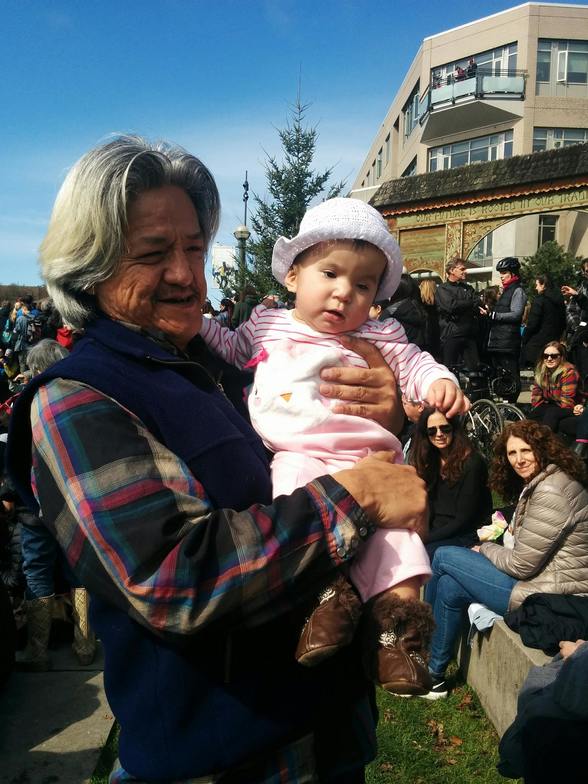 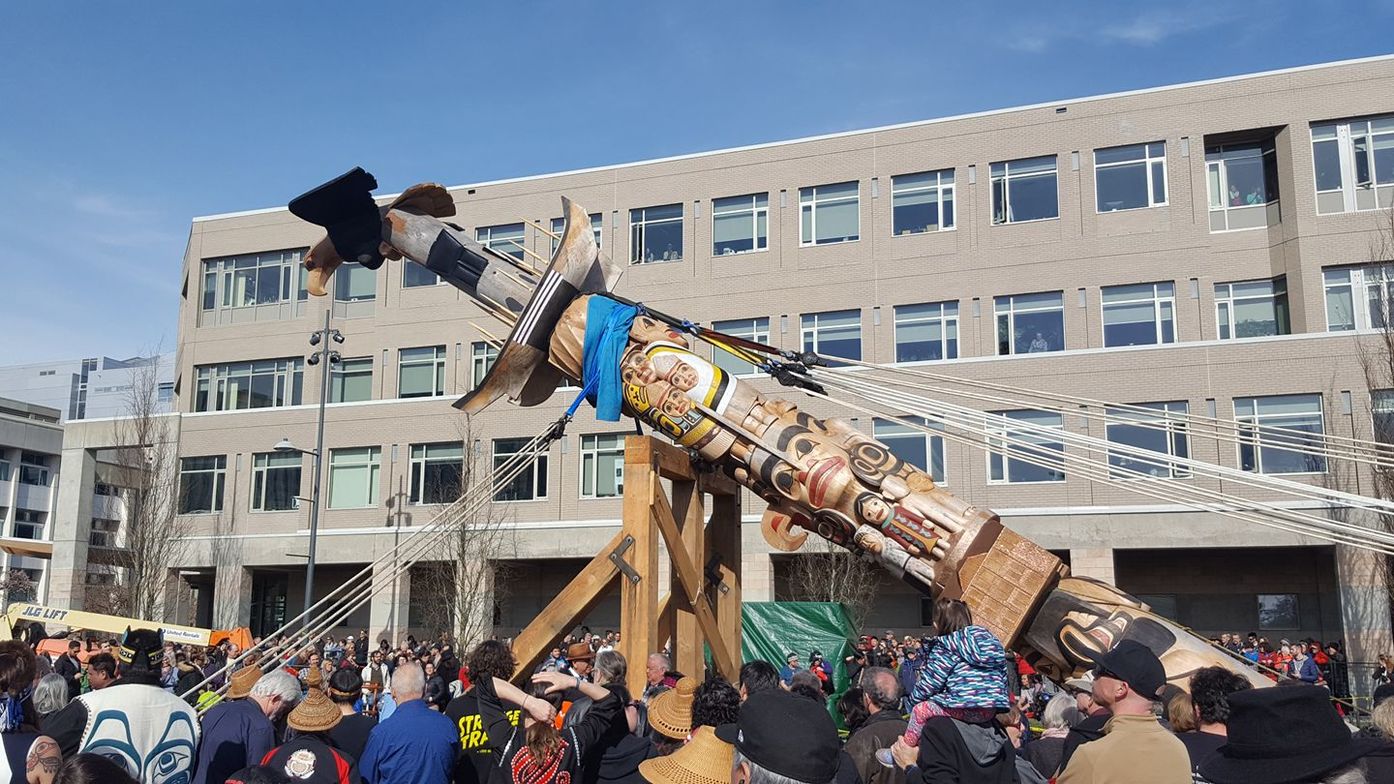 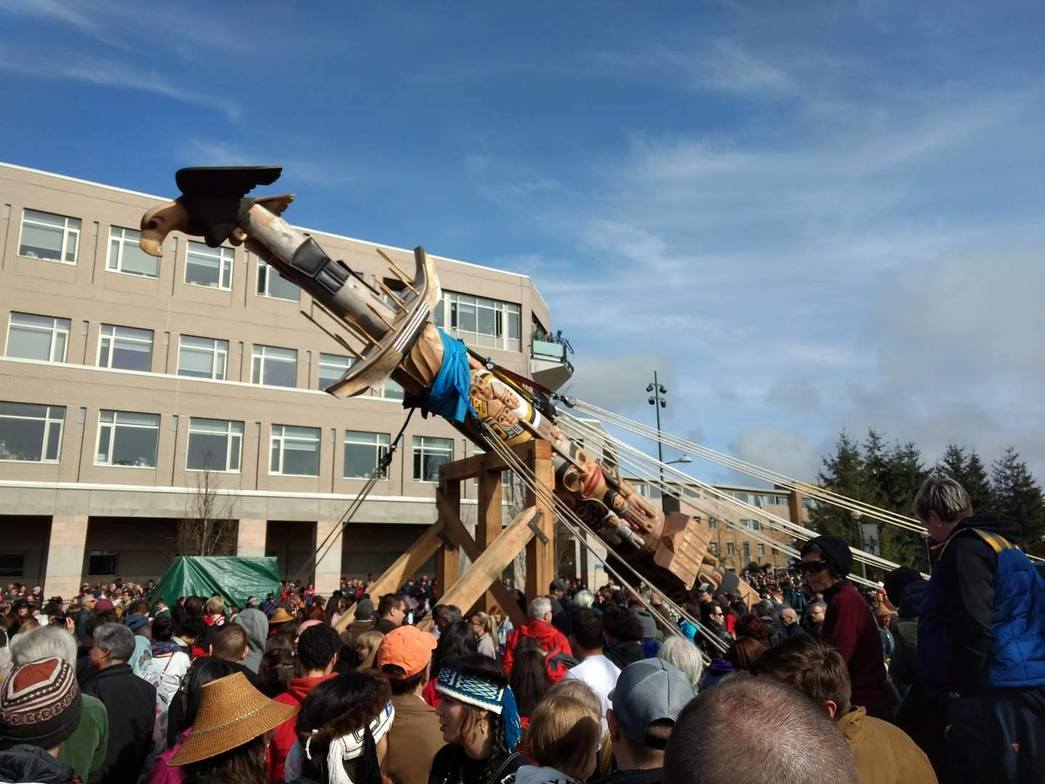 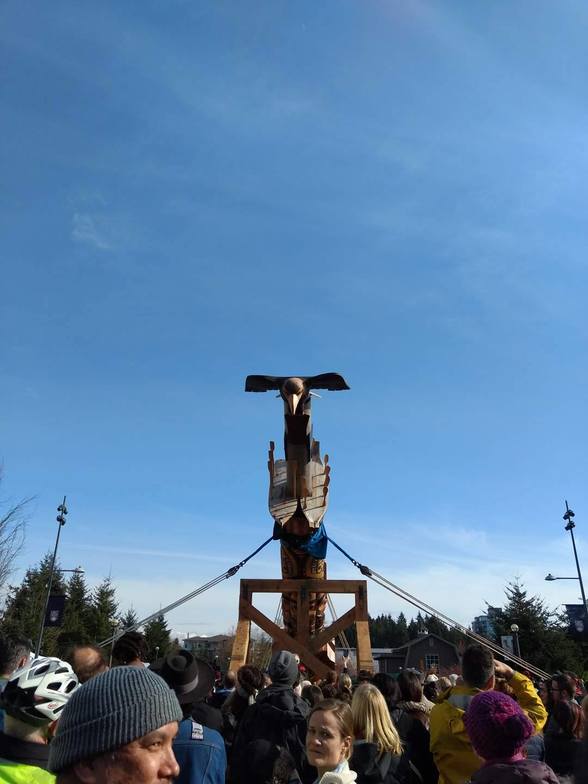 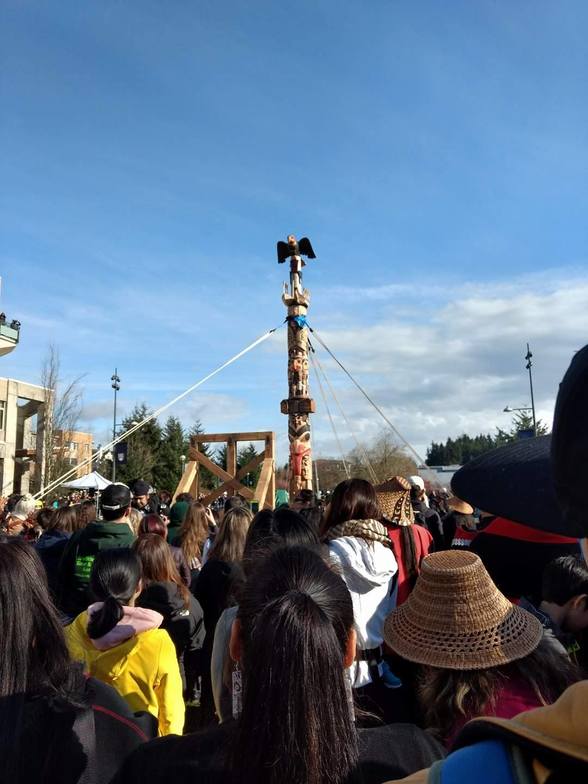 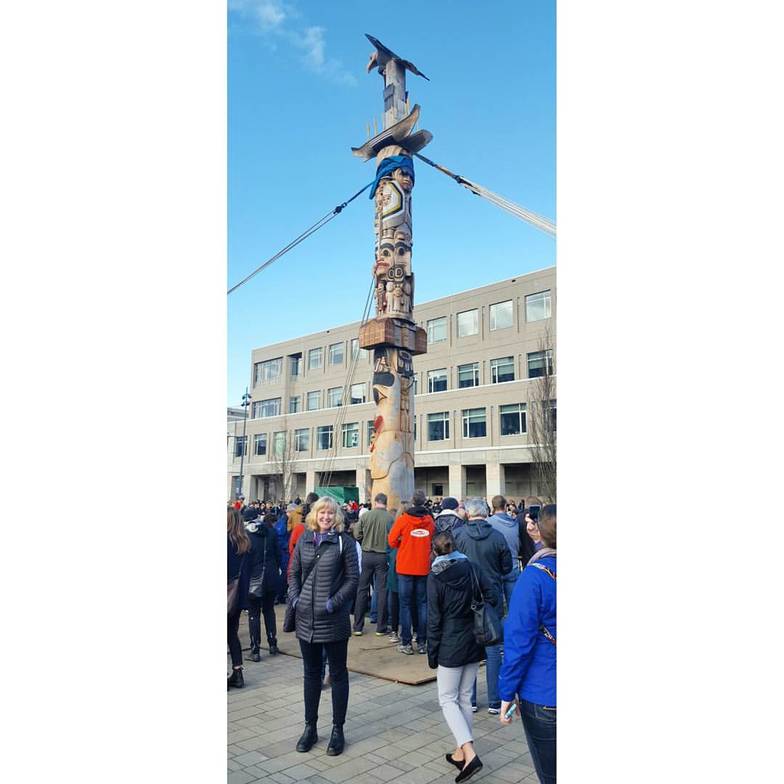 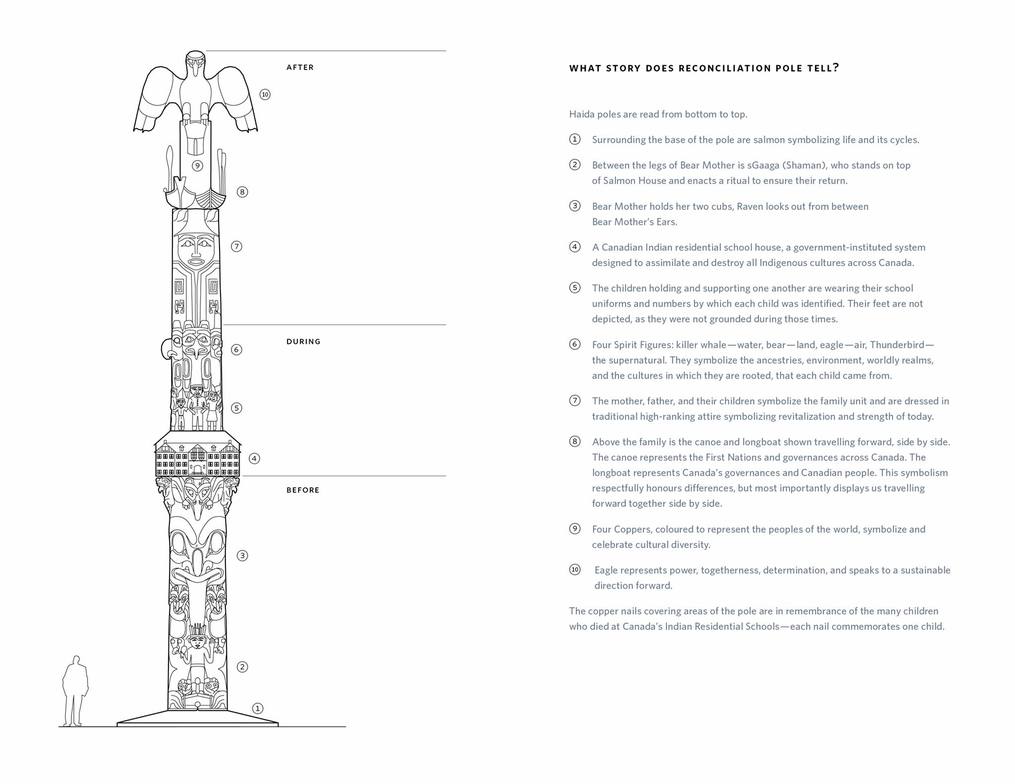 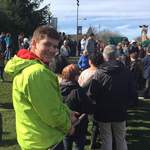 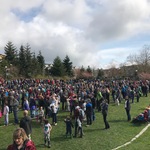 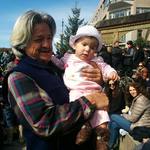 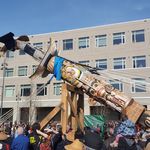 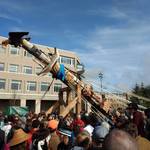 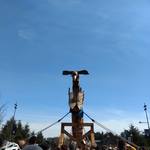 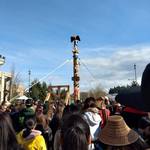 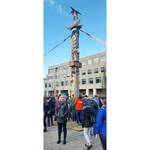 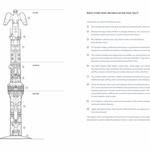 Indigenous and non-Indigenous Anglicans from all over the diocese were present at UBC on Saturday April 1 to witness the raising of a 17 metre reconciliation pole carved from a 800 year old cedar.

One of the most positive aspects of the faith formation of my youth was the sacrament of reconciliation and penance. In my adulthood I’ve come to understand the sacrament of reconciliation to be something much more profound and life-altering than a simple “I’m sorry.” Reconciliation is the ultimate gift that arises from a long process involving a thorough self-inventory and personal reflection of the harm that my actions or inactions inflicted on others. This level of self-scrutiny demands a special kind of rigor and honesty. It demands profound humility. It demands an ready ownership of whatever roles I’ve played in the ills brought upon others. It continues with an informed commitment and readiness to do whatever is necessary to restore that which is broken in relationship with another. Without this necessary foundation (and the subsequent calls to atonement that will naturally follow), reconciliation is never fully realized. Right relationships - one to another, and one to God - can never truly be restored without both total candor and a completely willing change of heart and mind.

I was reminded in the most tangible way of all that I’ve learned about the sacrament of reconciliation and penance this past weekend. On Saturday April 1 at the University of British Columbia’s Main Mall, thousands of people showed up to help raise Haida Chief James Hart's (7idansuu) beautiful and enormous wood carving, the “Reconciliation Pole.”

I work at UBC's Museum of Anthropology, and the piece had been transported to a tent behind the Museum during the middle of winter for its final preparation for this April event. Over the past number of months, co-workers helped pound copper nails into the image of the school on the pole. Each nail represented one the thousands of indigenous children who perished in Canada’s residential school system over its 156 years of existence. The Diocese of New Westminster was involved in the running of St. George's school in Lytton and All Hallows school in Yale.

At the Museum, we work with many who survived the system, or children of those who survived the schools. Last year, we hosted Lawrence Paul Yuxweluptun's "Unceded Territories," a show that painted a stark picture of not just what transpired in the schools, but of all of the cultural references and traditions forever lost to those who descended from the survivors. We come to work and are surrounded daily by the remnants of the indigenous past in our collection, but nothing prepared us for the emotional impact of the speeches that we heard at Saturday’s ceremony. Survivors recounted tales of childhood rape, of beatings, of starvation. We heard accounts from one survivor's sister of children lured by ice cream, abducted from their homes and taken away to the schools. Another survivor spoke of being regularly locked in a cell for 18 hours at a time, and of his lifelong struggles with alcoholism that could be traced back to these early traumas.

After 4 hours of standing on the grassy knoll, our backs and legs ached. It was difficult to hear the speeches being delivered, and we were tired. Yet people remained - thousands of them. Those who were there became my great takeaway lesson of the day, and that was this: People showed up. People arrived, and they stayed in a gesture of solidarity with the survivors, present to what was unfolding in enormous numbers.

We were tired, but excited. I asked a friend from Christ Church Cathedral if he was going to see it through until the end. His answer gave voice to what so many of us present that day felt. "I want to stay and see this through. I want to be able to look back and say that I played a part in raising that pole." His comment encapsulated something very special – something approaching the sacramental and penitential – that transpired that afternoon. People were there not to prescribe easy remedies. There were not there to play the role of heroic saviors or colonizing hero, the original and ill-informed intent of those who started the schools in the first place. People were simply present to bear witness, to listen, and to say that they were connected to this new symbol of hope arising on the traditional Musqueam land upon which UBC and the Museum sit. Like the canoes on the pole, which the artist designed to symbolize parallel forward movement, the endurance of the crowd that day spoke of a people willing to stand and walk beside the most victimized in our society. In the words of survivor Barney Williams, what was wrought wasn’t just an indigenous problem. It is Canada’s problem, and the thousands who gave up their free time to help bring upright this symbol of reconciliation seem to understand this. Their presence underscored a kind of penitence, a willingness to make the hard journey back with alongside those who had suffered so many indignities, and who’d lost so much.

When the pole finally did begin its ascent, I cheered, along with the rest of the crowd. I cheered and remembered what the blessing of reconciliation really demands of me. I took heart in and derived great hope from this day, and in my small part played on this long and difficult part on this path back to right relationship.

Kenny Pierce is Mexican-American, raised in Southern California, and who moved to Canada in 2006. He worships at St. Brigid's Community at Christ Church Cathedral and St. Andrew's-Wesley United Church. He is the I.T. Manager at UBC's Museum of Anthropology