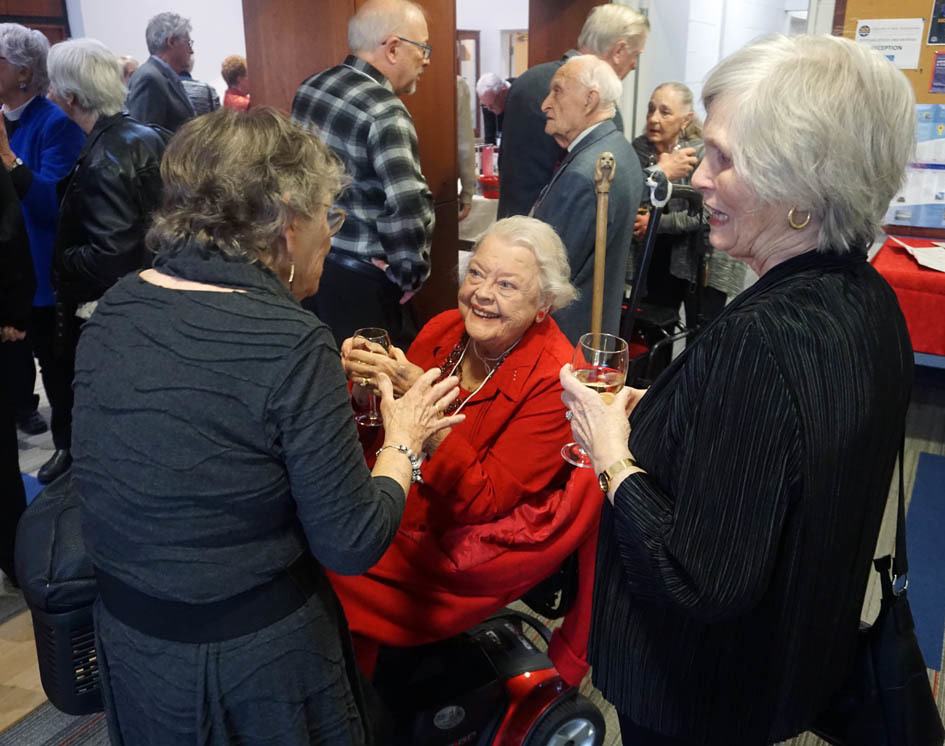 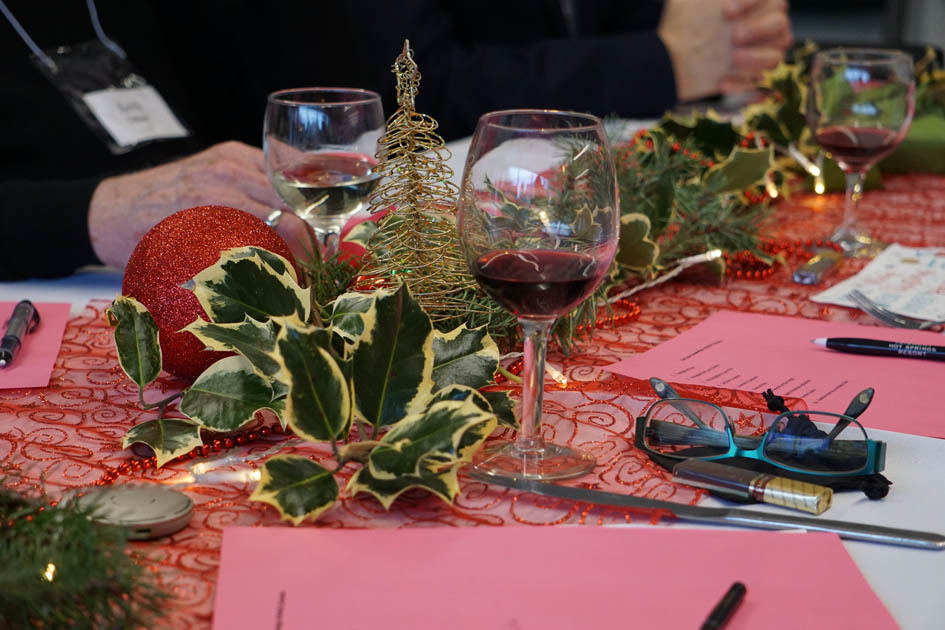 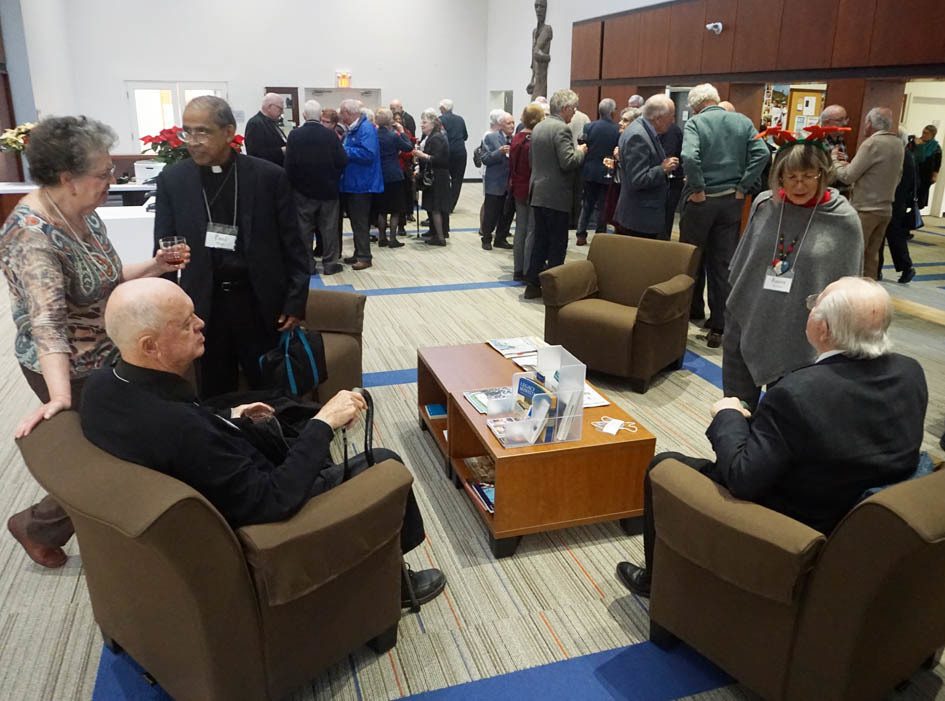 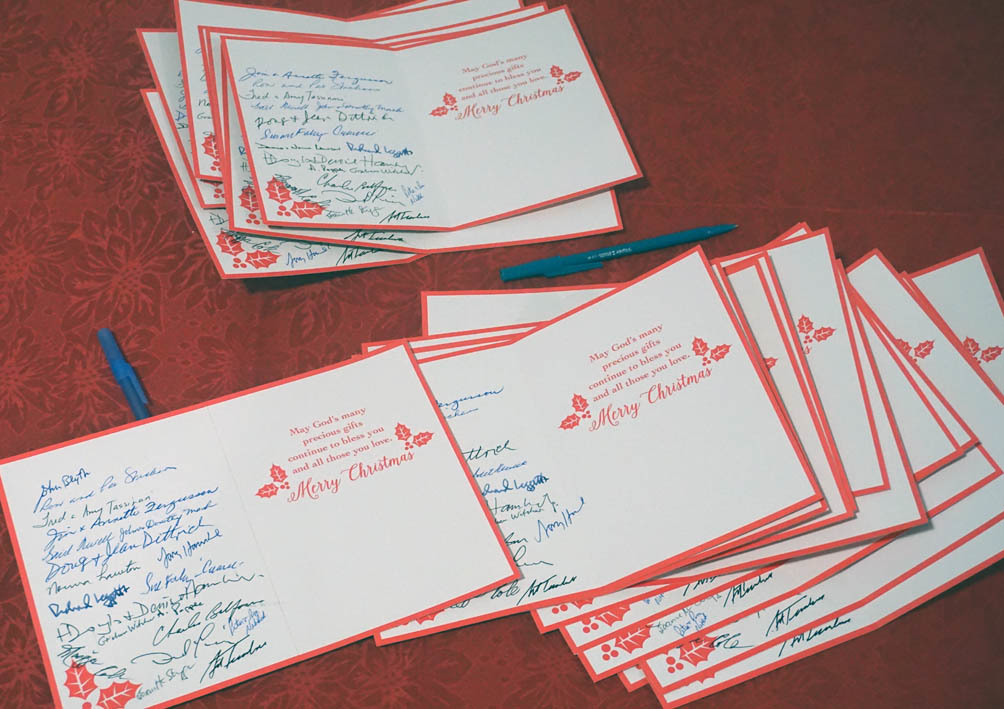 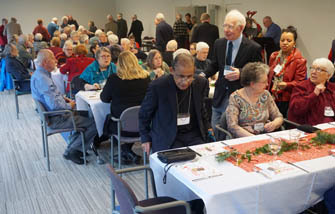 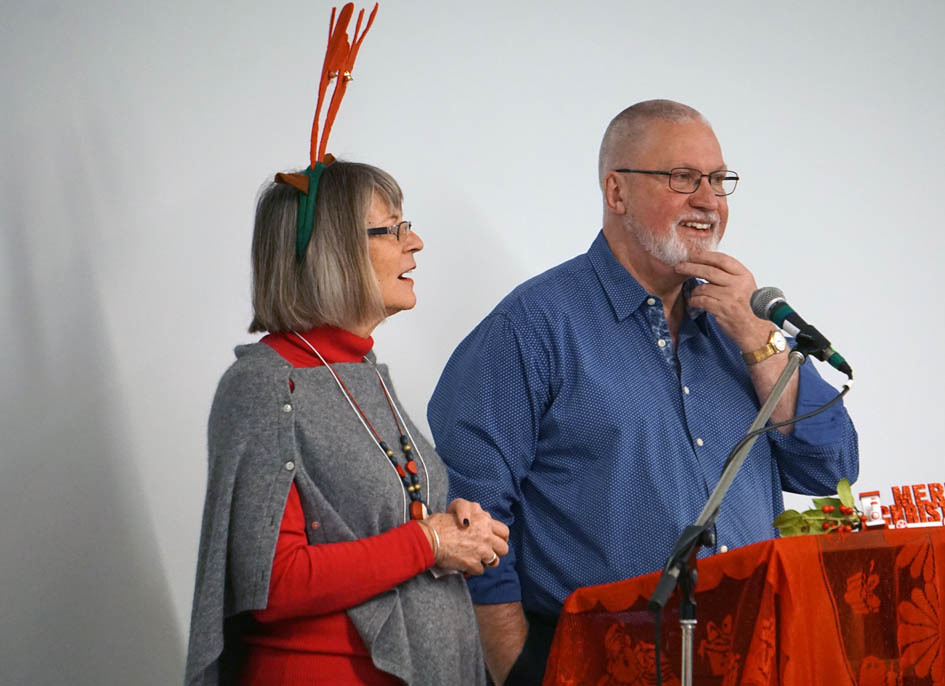 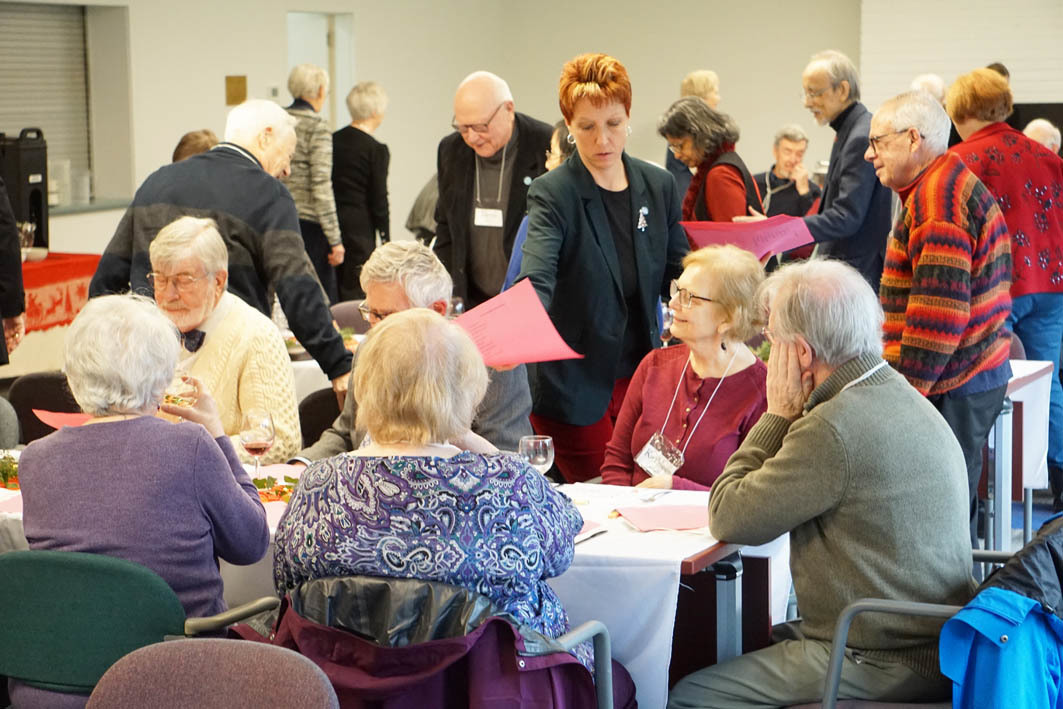 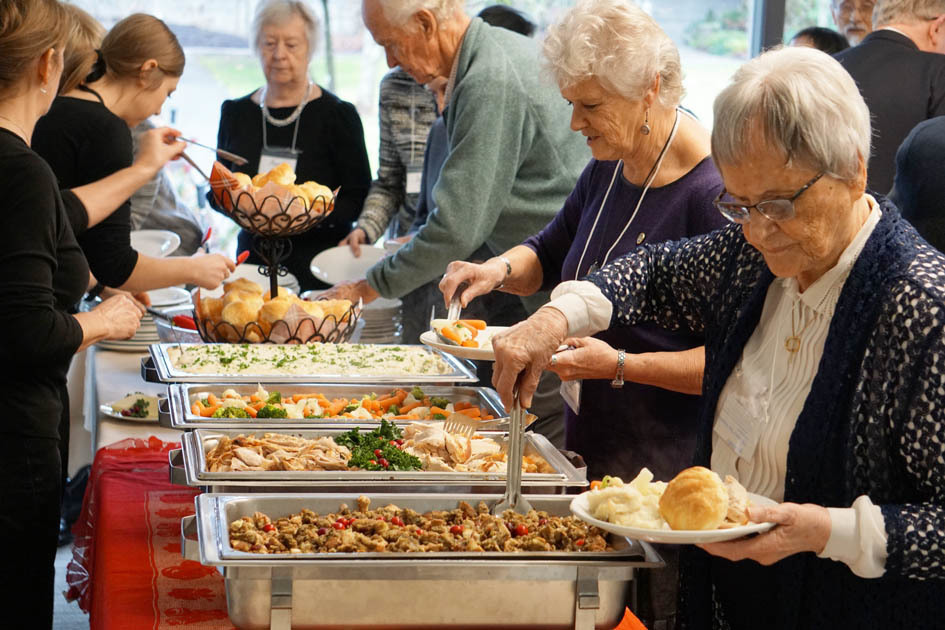 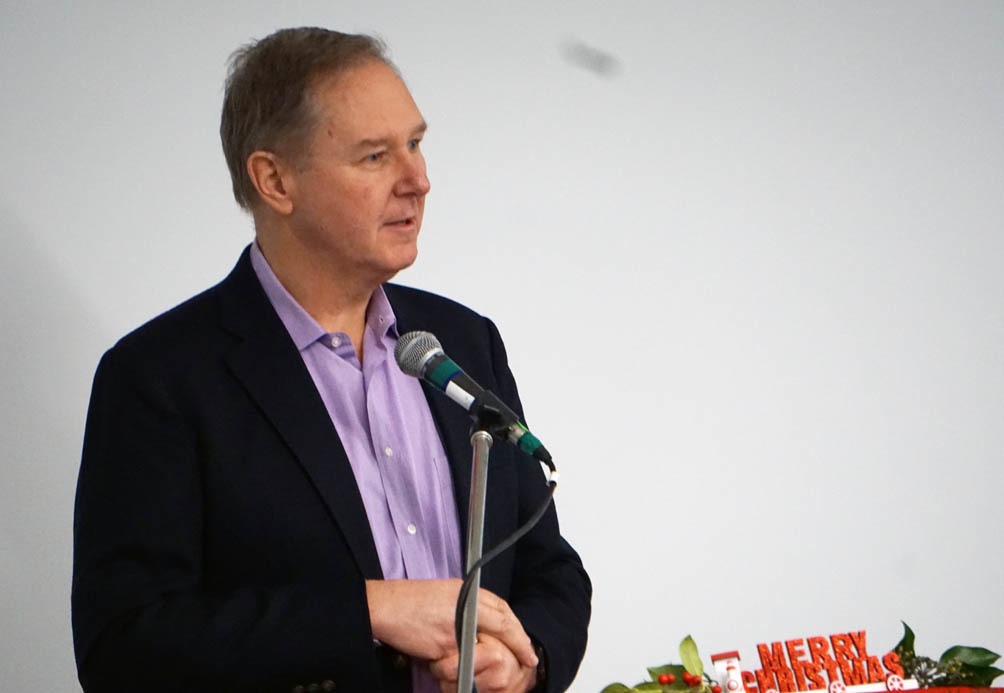 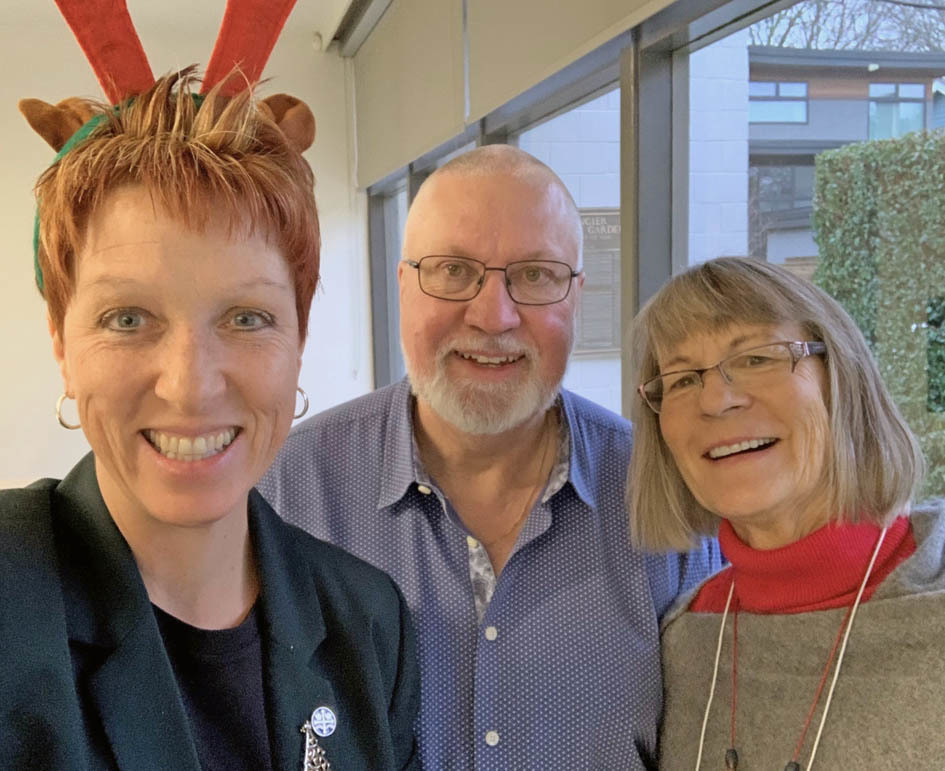 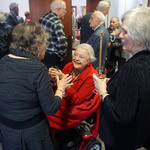 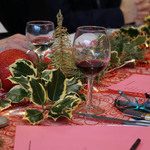 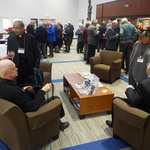 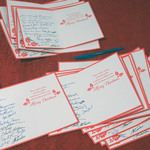 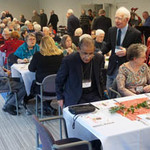 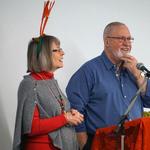 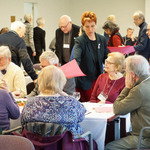 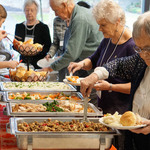 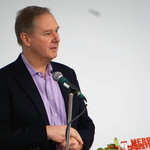 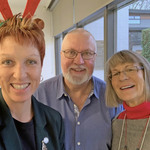 The 2019 version of the Retired Clergy and Spouses Advent/Christmas Luncheon held on Tuesday, December 10 at the Synod Office of the Diocese of New Westminster was again an unqualified success. The current Chaplains to the Retired Clergy and Spouses, the Reverend Neil Gray and Deacon, the Reverend Karin Fulcher with the assistance of skilled caterers and diocesan hospitality volunteer Jane Dittrich put on a wonderful event.

More than 100 attended the luncheon that began at 11:30am with drinks and conversation in the reception area and main hallway of the Synod office at 1410 Nanton Avenue. The Reverend Keith Gilbert resplendent in his kilt reprised the role of bartender. As is traditional there were a number of Christmas cards on a table for everyone present to sign and those cards would be sent to those who were unable to attend the event.

Following a spirited reception time that continued to 12:30pm, the party moved to the Trendell Lounge where tables had been set and seasonally decorated for lunch.

Reverends Gray and Fulcher came up with a Quiz Show theme for 2019. Smart phones were required to be put away and NOT utilized.  There were eight tables set up, the plenary were asked a “scramble” question and whomever came in with the correct answer, their table would line up for food. The questions were pretty tricky (i.e.,“What’s the capital of Bulgaria?”*) and the process took a little bit longer than the organizers had hoped, (although this reporter noticed that the Revd Gray seemed to be enjoying the process considerably).

Part two of the quiz show theme began with a group of volunteers led by Jane Dittrich distributing quiz sheets to everyone. There were two sets of 10 questions:

The guests were encouraged to answer the questions, pens were provided.

The turkey dinner with all the trimmings was delicious and much enjoyed by the company.

As coffee, tea and seasonal pastries were served, Executive Archdeacon of the Diocese of New Westminster, the Venerable Douglas Fenton brought greetings from Archbishop Skelton who at the time was well into the second month of her study leave.  Amongst other items of interest, he shared information about the changes that had taken place on Synod staff during the fall and also urged the retired clergy and spouses to take full advantage of the opportunities for therapeutic care available through the Manulife benefits package. He thanked everyone for their continuing ministry, ongoing support of their parishes and their support of the ministry of the diocese.

Also during the dessert section, Rev. Gray directed the plenary to focus their attention to the quiz sheets and mark their own as he provided the answers to the 20 questions. The high score was a modest 13 and the participant who had that score was presented with a wrapped gift.

Rev. Gray and his collaborator Leslie Buck of St. Paul’s assembled two fine quizes and they agreed to share them with the diocese. Try it out on friends and family this Christmas

The quiz is available below as a downloadable .PDF