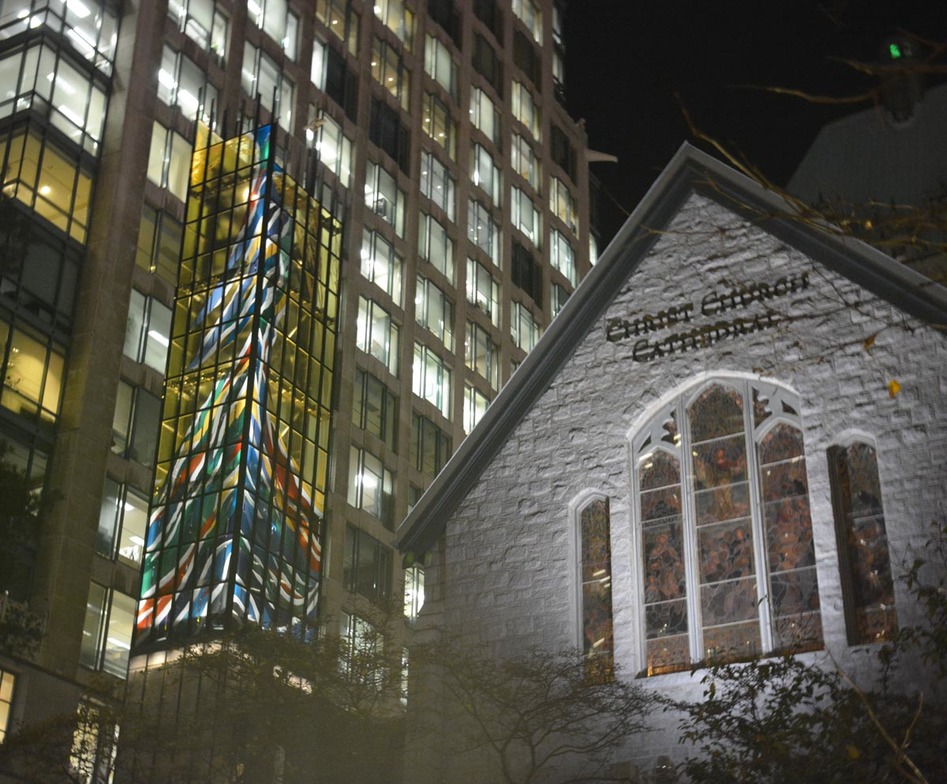 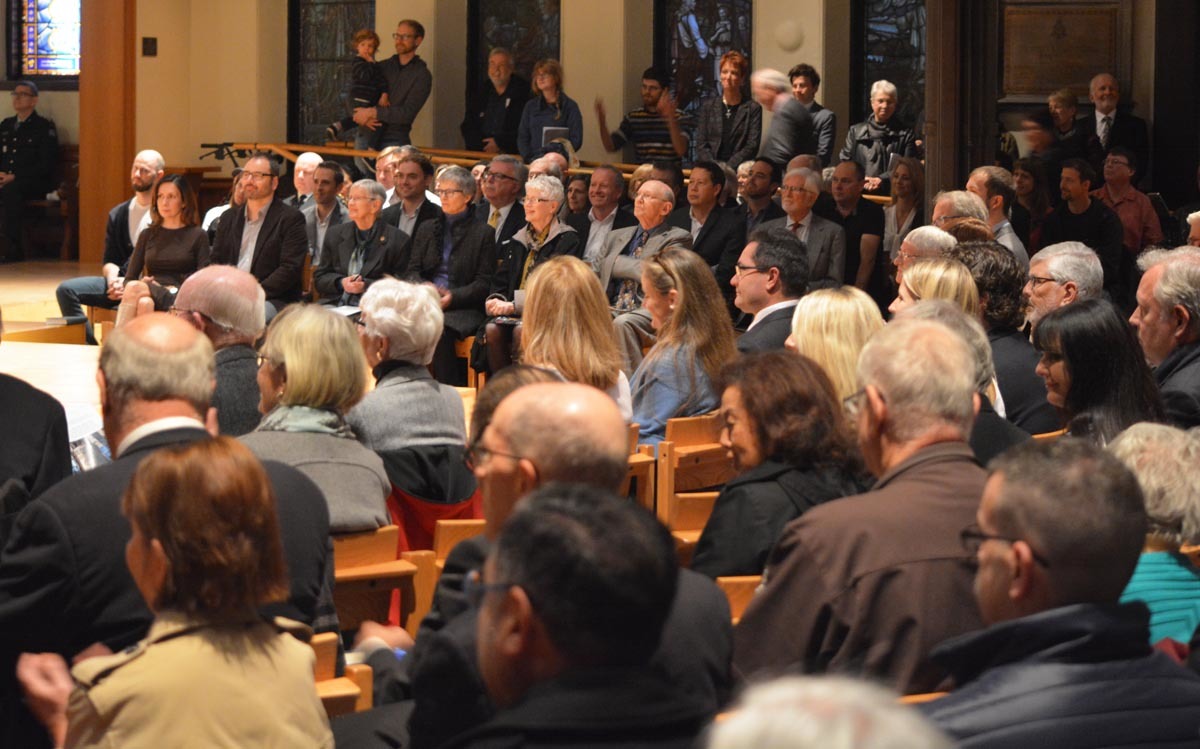 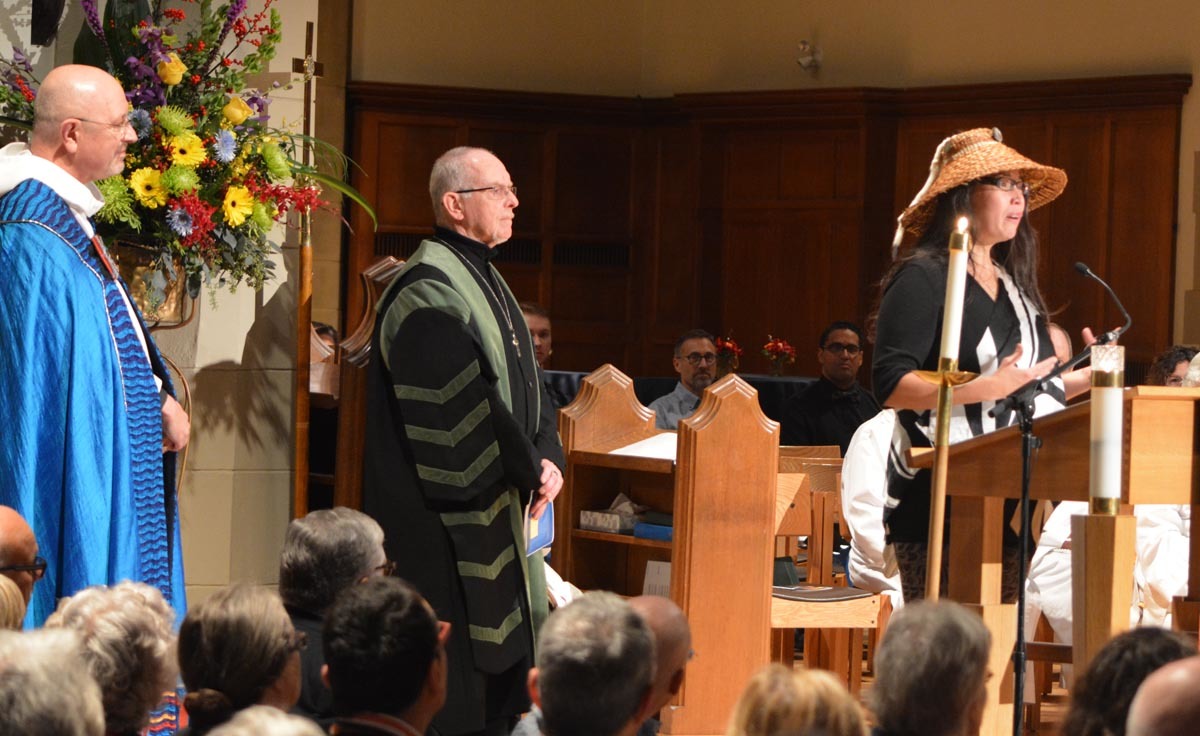 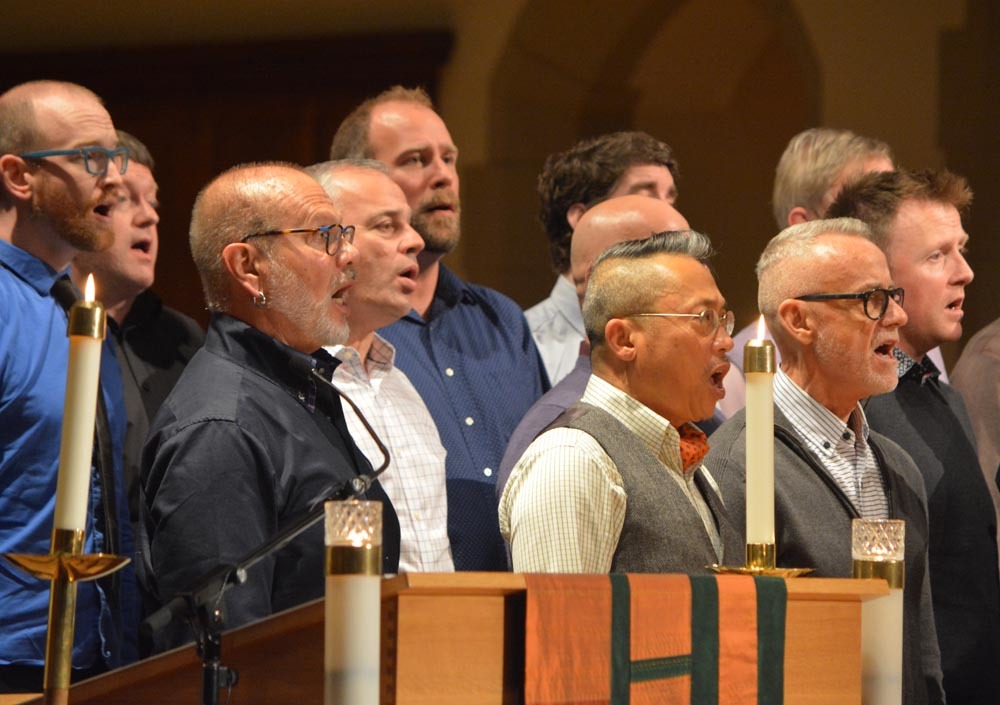 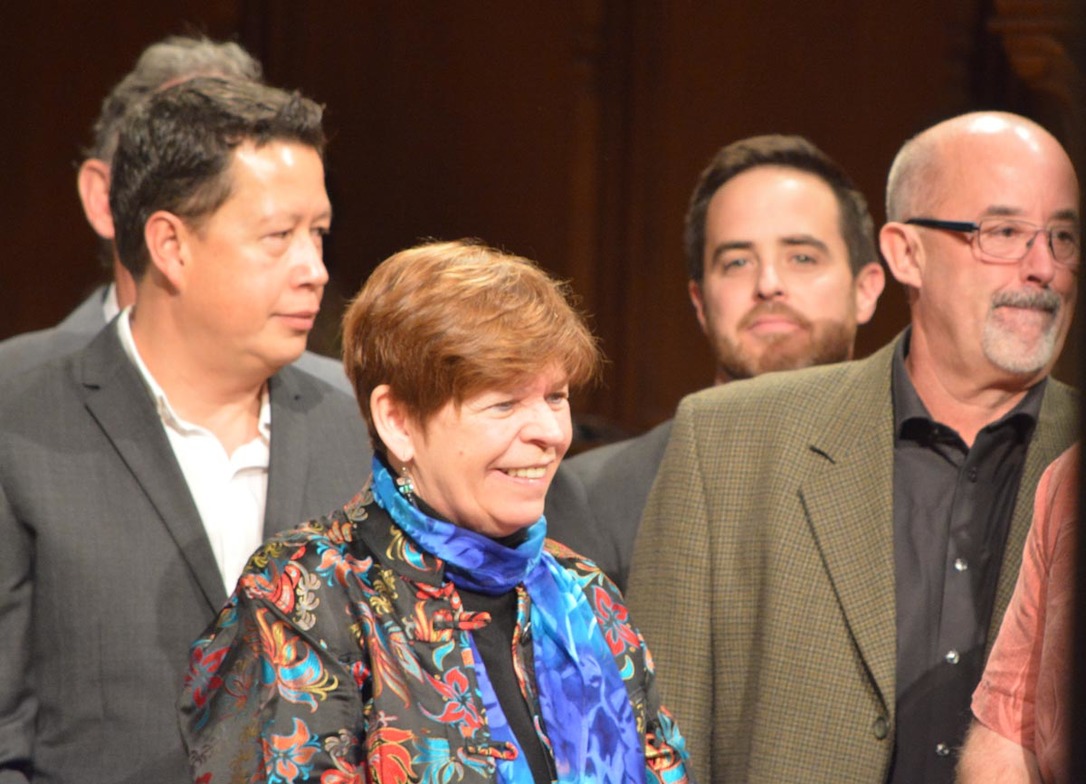 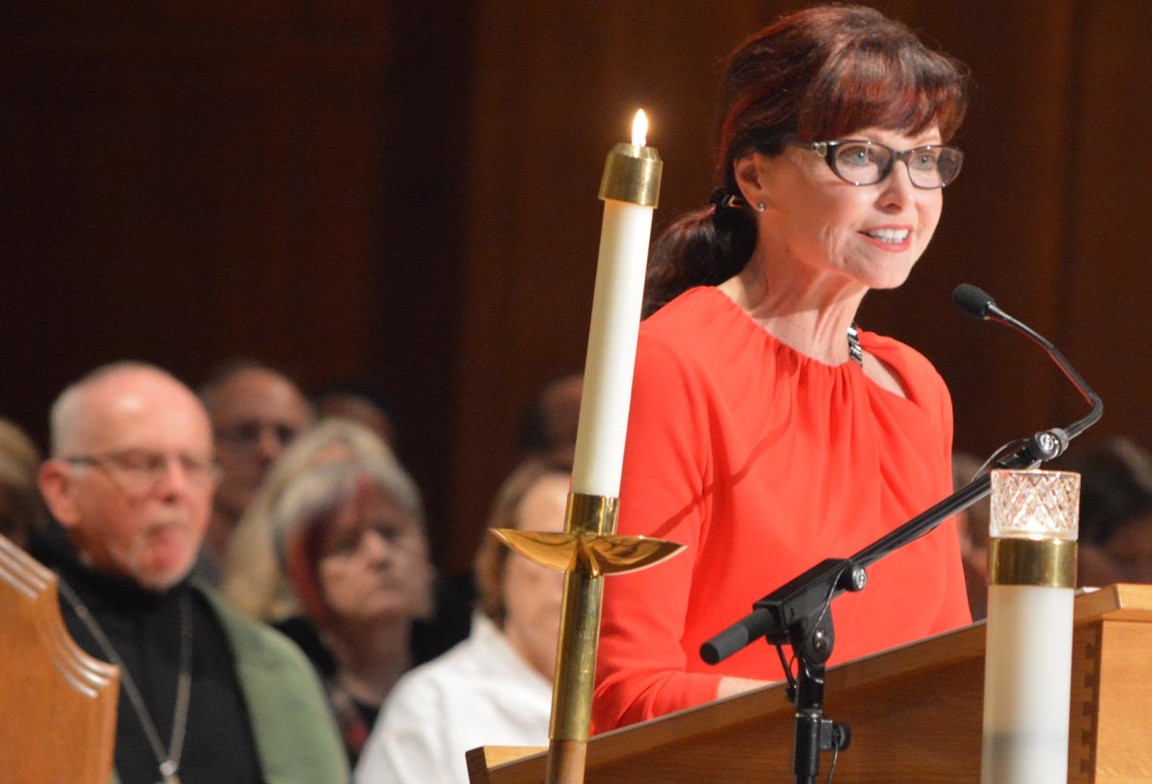 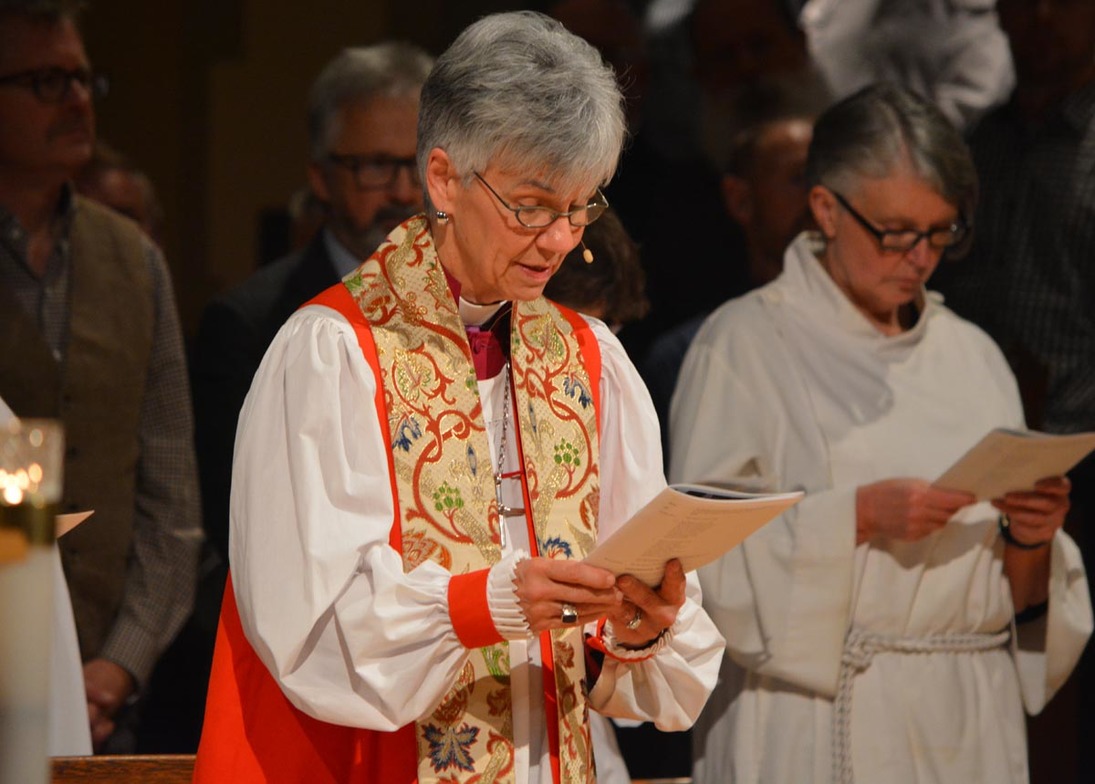 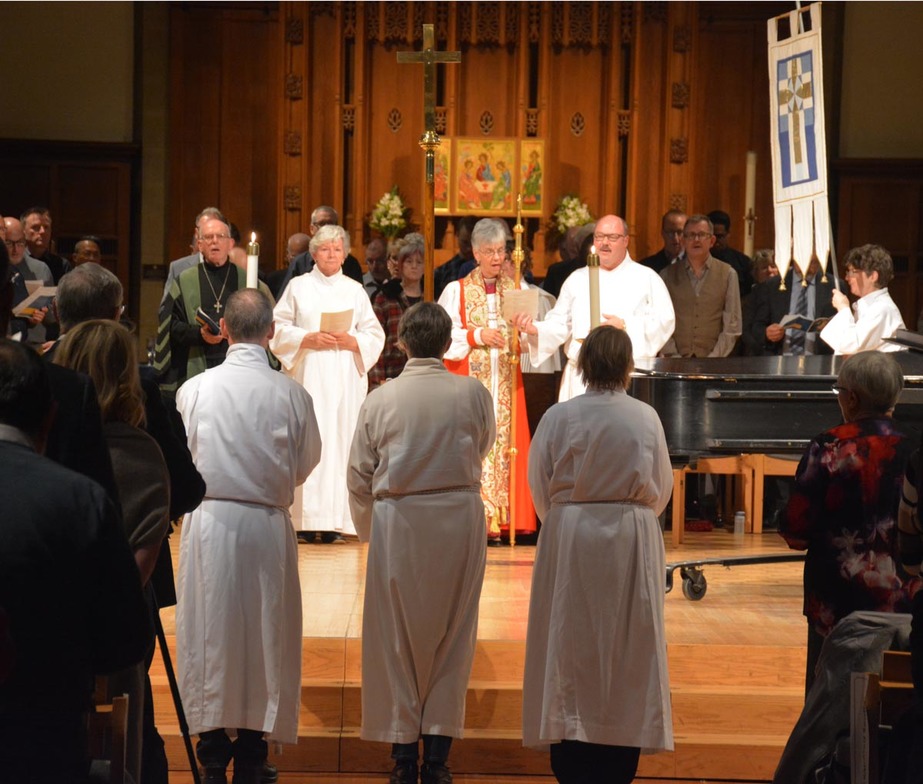 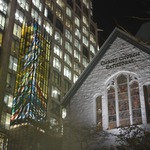 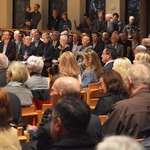 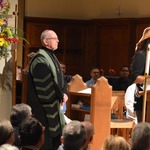 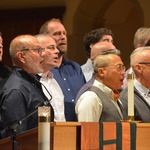 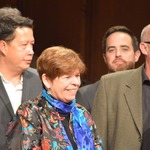 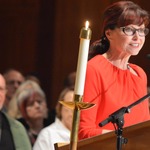 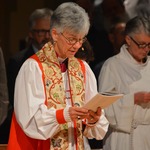 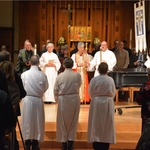 In the late of afternoon of November 17, 2016, with blessings, acknowledgements, applause, singing, ringing bells, smart phones held high to record the moment and champagne, Christ Church Cathedral (CCC), the Anglican Cathedral of the Diocese of New Westminster celebrated the completion of 20 years of renovation, restoration, innovation and renewal of the 130+ year old Vancouver landmark.

Within the 20 years (and 20 million dollars raised for the work) there have been five projects:

The second phase in 2003-2004, required that the congregation gather in another location (a meeting room at the Vancouver Public Library) for over a year and the fifth phase just completed saw the congregation again worshipping in another location (a conference room in a downtown hotel) for much of the spring, all of the summer and much of the fall of 2015.

The November 17 celebration entitled RING OUT! was in response to the completion of the most recent phase, but it is safe to say that many of the people in the SRO assembly gathered in the Cathedral at 4:30pm had been around since the arrival of the dean and rector, the Very Reverend Dr. Peter Elliott who within a year of beginning his new ministry in 1994 had a vision for the church located at Burrard and West Georgia and after 22 years much of that vision, a vision shared by many has now been realized.

It was appropriate that the heart of the RING OUT! celebration was worship. By 4pm the nave of the church which comfortably holds 500-550 was almost full and by the time the procession began a half an hour later, signaling the start of the liturgy every seat was occupied and many were standing in the nave entrance, narthex and lining the spaces behind the two wheelchair accessible ramps to the chancel.

The service began with a formal welcome to the territory of the Musqueam First Nation by Audrey Siegl. In her welcome she spoke of light and the shared appreciation of those “who work in the light” by both First Nations and Settler cultures. She spoke of the importance of “welcoming light” (the official name of the new bell spire) and added that she knows “this is an inclusive place” that “honours diversity.” She then shared a song that Chief Dan George gave to the Coast Salish Peoples.

This formal welcome was followed by a brief address from dean and rector, the Very Reverend Dr. Peter Elliott who said that he had altered the first few lines of his opening remarks due to the outcome of the US presidential election the week before but proceeded saying, “in the words of US Secretary of State Hillary Clinton it takes a village to raise a child”…”it takes a city to raise a cathedral.” And this theme of the City of Vancouver’s contribution and involvement in the completion of the work on the building was present throughout the 50 minute service.

Next was a congregational hymn, a new hymn written by the Cathedral’s vicar, the Reverend Dr. Ellen Clark-King to the tune Diademata:

Ring out Vancouver bells!Let all the city hear God’s love song, filled with peace and hope In music deep and clear. Ring out, ring out, bright bells! Calling our minds to rise Away from thoughts of selfish gain, To hear our neighbours’ cries

Ring out, ring out sweet bells! To tell our holy tale Of God’s close presence with us now, And love that does not fail. Ring out Cathedral bells! In joy and faith and love; Remind us that our home is God, Both here and then above.

The service continued with: a reading from Isaiah by Bard on the Beach founder, Christoper Gaze, OBC; a reflection from the Reverend Canon Dr. Herbert O’Driscoll, the tenth rector and fifth dean of CCC (1968-1982), who in the brief span of three and half minutes told a story from the era of the Roman Empire which bore a remarkable resemblance to the current state of our world (an video of the entire service is available by clicking this link, the liturgy begins at the 37:40 mark and the reflection begins at 55:10); the 2013 original choral work, Ring Out Wild Bells, text by Alfred, Lord Tennyson, music, Stephen Smith performed by The Vancouver Men’s Chorus with Stephen Smith’s piano accompaniment; acknowledgment of all those involved in the project presented by Rick Cluff of CBC Radio’s Early Edition which saw Darlene Poole (representing the Jack Poole Foundation whose 2.5 million dollar gift launched the most recent campaign) and the majority of the principals involved in all facets of project invited up to the chancel entrance platform to receive the appreciative applause of those gathered in the church; a section titled The Cathedral and the City which consisted of an address from Honorary Colonel Michael Shields, CD who explained the importance of Christ Church to Vancouver’s military regiments with a request that those who had not had the experience spend some time in the Regimental Colours alcove viewing the battle flags preserved there, and an address from Carol Taylor, OC who said that CCC was almost demolished and a new church and office tower built in its place in the mid-1970’s, reminding people that it was due to the perseverance of many Vancouverites outside of the membership of Christ Church Cathedral who helped ensure that “Christ Church Cathedral is here for the community." She finished her brief remarks by acknowledging the person who’d arrived after that era and who’s, energy, vision and commitment has made this possible, Dean Peter Elliott.

Prior to the blessing and dedication, Cathedral Choir under the leadership of organist and director of music, Rupert Lang offered the anthem, Lux Aurumque by Eric Whitacre and then Bishop Melissa Skelton said these words:

God of Strength and beauty we ask your blessing on the work of our hands. May light, music and solace flow freely from this cathedral church into our beloved city. May your mercy ring out and your truth shine forth that all who see this place and hear its bells may know that your heart cradles all creation and that you are present in our midst. In the name of the one who showed us that love and presence most clearly, Jesus Christ our Friend and Brother.

The worship part of the celebration concluded with the well-known hymn, Now Thank We All Our God, some instructions from Dean Peter Elliott on what would happen next and then 800+ people emptied out onto Burrard Street and located themselves in two prime viewing spaces, one in the garden area of the neighbouring building to the north Park Place and the other in the alley adjacent to West Georgia Street near the west entrance to the Cathedral’s neighbour to the east, Cathedral Place. Within minutes the spire lit up producing a happy gasp from the onlookers followed by the Westminster Chime, the individual ring of each bell in sequence. The chime was followed by a period of silence which prompted folks to yell out “more! more!” and then the bells rang for approximately three minutes delighting the crowd. When the bells stopped swaying and the joyful ringing was replaced by the sounds of rush hour in the city it was time to go back into the building where both levels were the venues for a champagne reception.

When asked at the event by a CBC reporter about the intended use of the bells, Dean Peter Elliott responded, “The bells are set to ring each day at 8am and 6pm and before church services…We're also talking to our interfaith neighbours, for example they could ring out at the beginning of Ramadan, Diwali, Roshashana or other religious celebrations to show we're a peaceful city and we respect each other” He was then asked about the impact of the bells on the downtown Vancouver neighbourhood to which he said, “Its going to be interesting, there hasn't been a bell spire at the corner of Burrard and Georgia in downtown Vancouver until just Thursday night (November 17, 2016), so we'll see how people respond.”

Congratulations to Dean Peter Elliott and the Cathedral community for this remarkable witness to faith in Vancouver and may the bells ring out “in joy and faith and love” for many years to come.

For detailed stories about each element of the Raise the Roof, Ring the Bells, Feed the Hungry project please click the link and visit the campaign website.